Maternal mortality and morbidity of unsafe abortion in a university teaching hospital of Karachi, Pakistan

Objective: To study the mortality and morbidity of unsafe abortion in a University Teaching Hospital.
Methods: A cross-sectional, descriptive study was conducted in Department of Obstetrics and Gynaecology, Unit III, Dow Medical College and Civil Hospital Karachi from January 2005 to December 2009. Data regarding the sociodemographic characteristics, reasons and methods of abortion, nature of provider, complications and treatment were collected for 43 women, who were admitted with complications of unsafe abortion, and an analysis was done.
Results: The frequency of unsafe abortion was 1.35% and the case fatality rate was 34.9%. Most of the women belonged to a very poor socioeconomic group (22/43; 51.2%) and were illiterate (27/43; 62.8%). Unsafe abortion followed an induced abortion in 29 women and other miscarriages in 14 women. The majority of women who had an induced abortion were married (19/29, 65.5%). A completed family was the main reason for induced abortion (14/29; 48.2%) followed by being unmarried (8/29, 27.5%) and domestic violence in 5/29 cases (17.2%). Instruments were the commonest method used for unsafe abortion (26/43;68.4%).The most frequent complication was septicaemia (34; 79%) followed by uterine perforation with or without bowel perforation (13, 30.2%) and haemorrhage (9; 20.9%). Majority of induced abortions were performed by untrained providers (22/26; 84.6%) compared to only 3/14 cases (21.4%) of other miscarriages (p=0.0001).
Conclusion: The high maternal mortality and morbidity of unsafe abortion in our study highlights the need for improving contraceptive and safe abortion services in Pakistan.
Keywords: Unsafe abortion, Maternal morbidity and maternal mortality (JPMA 61:582; 2011).

Unsafe abortion, a major public health problem worldwide, is responsible for 13% of maternal mortality and causes 70,000 maternal deaths every year, 99% of which occur in developing countries.1,2 Globally, there are 31 abortions for every 100 live births worldwide and 48% of all abortions are unsafe.3
According to World Health Organization, unsafe abortion is defined as a procedure for terminating an unwanted pregnancy, either by persons lacking the necessary skills or in an environment lacking the minimal medical standards or both.4 It has been estimated that 37% of all pregnancies are unwanted in Pakistan where every year, 890,000 induced abortions are performed (29 per 1000 women aged 15-49 years) and 197,000 women are treated in public and private teaching hospitals for complications of induced abortion (6.4/1000 women aged 15-49 years).5 A study from Pakistan has shown 1 in 7 pregnancies terminating in abortion with a post-abortion complication rate of 68.5%, fever and haemorrhage being the most common.6 The huge economic cost involved in treating these complications can exert a significant financial burden on the already fragile health care systems of developing countries and hence reduce their capacity to provide other much needed services.7
The risk of maternal mortality and morbidity associated with unsafe abortion depends upon the method of abortion and the qualification and training of service provider. Methods used for unsafe abortion including drinking toxic fluids, inserting herbal preparations, foreign bodies or inappropriate medication into the vagina generally lead to septicaemia. Dilatation and curettage performed in unhygienic settings by unskilled providers can cause uterine perforation with or without bowel perforation in addition to septicaemia.8
Hence, we conducted this study to assess the mortality and morbidity, reasons, methods, and types of providers of unsafe abortions.

This was a retrospective, cross-sectional, descriptive study conducted in Gynaecology unit III of Civil Hospital Karachi, for a period of five years, from January 2005 to December 2009. All women who presented to our department with complications of unsafe intervention for abortion and either died or suffered morbidity due to it, were included in the study. Unsafe abortion was defined as a procedure or intervention undertaken by untrained persons and/or done in unhygienic conditions for any kind of abortion, whether induced, spontaneous, missed, incomplete or therapeutic. Frequency of unsafe abortion was determined by dividing the total number of unsafe abortions by the total number of gynae admissions and multiplying by 100 (43/3185*100=1.35). Case fatality rate was expressed as the percentage of women diagnosed with unsafe abortion who died as a result of this condition during the study period eg 15/43* 100=34.9%. Morbidity was defined as a case of septic abortion where infection was limited to the uterus and responded to triple regime antibiotics followed by evacuation of infected retained products. Severe morbidity was defined as a complication where infection spread beyond the uterine cavity and required major surgery like laparotomy with or without hysterectomy. We divided cases of unsafe abortion into induced abortion where termination had been carried out for an unwanted pregnancy and other miscarriages where unsafe intervention was done for spontaneous, missed, incomplete or therapeutic abortion. Patients presenting with spontaneous, missed, incomplete or therapeutic abortion, without any prior intervention, were excluded from the study. A structured questionnaire was used to collect data. Information about patient\\\'s age, parity, marital status, sociodemographic characteristics, reason for abortion, method of abortion and type of provider, was collected by interviewing the patient or her relatives and that regarding complications of unsafe abortion and their treatment was retrieved from the patient\\\'s case files. The data was fed in the computer software program SPSS version 16 and was analyzed. 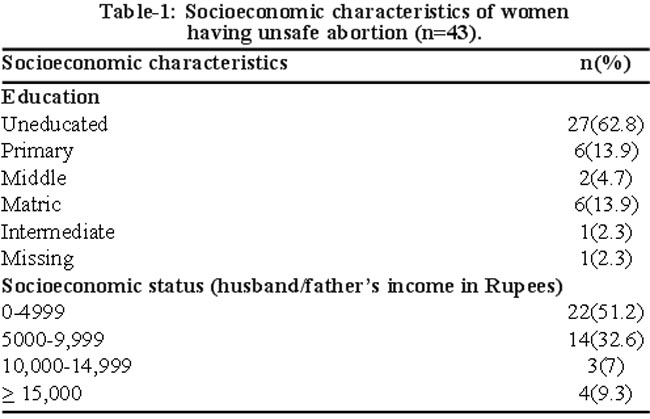 There was no significant difference in socioeconomic characteristics of women having an induced abortion from those having other miscarriages.
Twenty-nine women had an induced abortion due to unwanted pregnancy whereas fourteen had other types of miscarriages. The majority of women who had an induced abortion were married (19/29, 65.5%), 8 were unmarried (27.5%), and 2 were previously married (6.8%). Three of the unmarried women had been subjected to rape. The most common reason given for induced abortion was a completed family (14/29; 48.2%). Among the women who were unmarried or previously married (10/29; 34.3%), the pregnancy was unwanted for obvious socio-cultural reasons. Physical/emotional violence was given as the reason in 5/29 cases (17.2%). One of these women had started to bleed after her husband beat her severely and then a dai was called, who performed an evacuation on her at home. The most common method used for unsafe abortion was instruments in 26/38 women (68.4%). There was no significant difference in parity, gestational age and method of abortion of induced versus other miscarriages. The only significant difference was found in age above 30 years and the type of provider (Table-2). 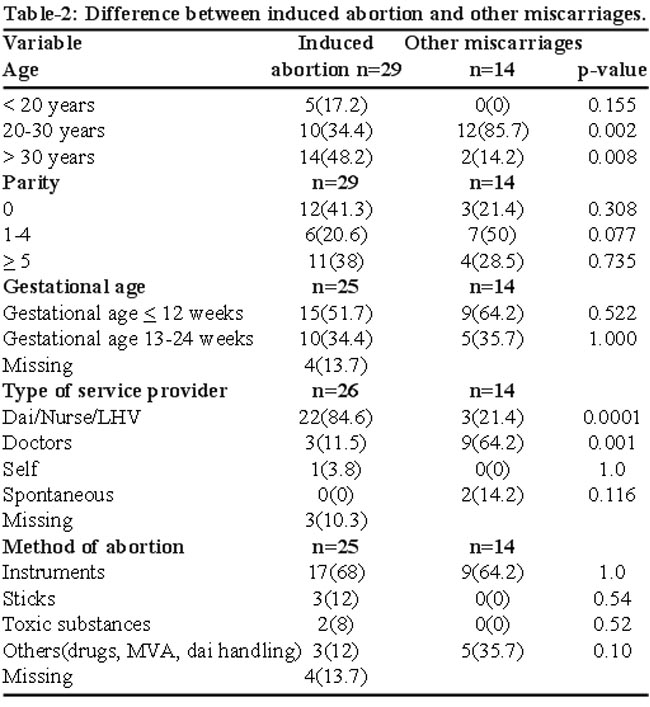 Table-3 shows the complications of unsafe abortion. Abdominal surgery was required in nearly half of the women admitted for unsafe abortions (20/43; 46.5%) with multiple laparotomies being required in 3(6.9%) women. Evacuations were performed in 12/43 women (27.9%). There was no significant difference in the complication rate and the rate of abdominal surgeries between the induced abortion group and that of other miscarriages. Blood transfusion was required in the majority of women (25/43; 58%), with 5 women requiring 4 or more units of blood (11.6%). Among women who died, one woman had been brought dead after getting toxic substances inserted into her vagina by a dai (7.1%), five died within an hour of arrival (35.7%), another three died the same day (20%)and the rest within 7 days. Among those who suffered morbidity, eleven women stayed in hospital for up to 7 days (39.2%), eight stayed for up to 14 days (28.5%), four up to 30 days (14.2%) and four stayed for more than 30 days (14.2%).

Our results indicate that unsafe abortion is a major cause of maternal mortality and morbidity, mostly because the service is being provided by untrained health care providers in unhygienic conditions. Since maternal mortality is a violation of the women\\\'s basic human right - the right to life, there is an urgent need to prevent these unnecessary deaths by improving the quality of family planning programme and providing safe abortion services.