Objectives: To determine the outcome of Primary Precutaneous Coronary Intervention (PCI) in our setup and compare the results with the west.
Methods: This study was conducted at a tertiary care teaching Hospital (National Institute of Cardiovascular Diseases Karachi, Pakistan) during January 1st, 2008 to December 31st, 2008. A total of 113 patients were enrolled who came with STEMI and agreed to go for Primary PCI. We excluded the patients who had history of Thrombolytic therapy within 24 hours, presented with Non ST-elevation Myocardial Infarction (NSTEMI) and coronary angiogram revealed significant left Main or equivalent disease. All Patients received Aspirin, Clopidogrel and Platelet Glycoprotein IIB IIIA Inhibitor. After Primary PCI patients were planned to follow at one month, 3 months and 6 months. Primary end point was to document death, MI, CABG and re-hospitalization.
Results: Out of 113 cases, 102 (90.3%) were male and 11 (9.7%) were female, Mean age was 51.2±11.7 years, 54 (47.8%) patients had Hypertension, 28 (24.8%) were Diabetics and 44 (38.9%) were Smokers. Immediate success was achieved in 111 (98.2%) cases. In hospital mortality was 5.3% (3.5% in cardiogenic shock, 1.7% in non-shock patients). Mean Door to Balloon time remained 98.4 minutes. Twelve patients were lost to follow up. Therefore at 6 months, out of 101 patients, 8 (7.9%) died, 5 (4.9%) underwent Coronary Artery Bypass Graft (CABG) surgery and 5 (4.9 %) had been re-hospitalized either for recurrent myocardial infarction or heart failure.
Conclusion: Optimal results of primary percutaneous coronary intervention can be achieved for acute STEMI in a developing country at a tertiary care public sector hospital. The results are comparable and nearly similar to the west.
Keywords: ST-segment elevation Myocardial Infarction, Primary Percutaneous Coronary Intervention, Mortality (JPMA 61:575; 2011).

Percutaneous coronary Intervention (PCI) in patients with acute ST elevation myocardial infarction (STEMI) is an established and preferable method of revascularization. Considerable body of evidence now suggests that revascularization with primary PCI provides better outcome as compared to pharmacological treatment.1 Primary PCI significantly reduces mortality, re-infarction and stroke rates.2 This is true not only for patients admitted to PCI centers but also for patients transferred from non PCI centers.3 Despite this fact among the third world nations, this mode of treatment has not been widely adopted yet as a first line treatment particularly in public sector hospitals. This is mainly due to financial reasons as the state funding for health sector is very minimal and patients have to bear most of the expenses. Therefore, it is not surprising if the data is scarcely available from the developing nations including indo-Pak subcontinent.
Primary PCI is being done at our centre since 1999, but it was offered to those in whom Thrombolytic treatment was contraindicated. Recently we reorganized our Primary PCI programme and now it is offered to every patient who comes with acute STEMI. The key question, however, is whether we can truly offer this health care facility in a public sector tertiary care centre. The primary object of our study was to determine the outcome and predictors of mortality in patients undergoing primary PCI for STEMI in a tertiary care public sector hospital in Pakistan. Our secondary outcome was to compare our results with the published literature from developed countries.

This study was conducted at the National Institute of Cardiovascular diseases (NICVD) Karachi during January 1st 2008 to December 31st 2008. All Patients presenting with acute STEMI were offered Primary PCI. Patients who chose primary PCI as a mode of reperfusion were included in the study. Informed consent was taken and detailed questionnaire was filled for those patients who fulfilled the following inclusion criteria: (1) chest pain lasting > 30 minutes with (2) an ST elevation of > 1 mm in > 2 contiguous leads and (3) time from symptom-onset to presentation > 24 hours. Patients who received Thrombolytic therapy within 24 hours of hospital admission, those who were diagnosed as Non ST elevation Myocardial Infarction (NSTEMI) and those presenting beyond 24 hours with resolved symptoms were excluded from the analysis.
Procedure:
Primary PCI of the infarct related artery was performed in standard fashion using a variety of guiding catheters, coronary wires, balloons and stents. The majority of interventions were performed via the femoral route. However, the choice of route was on discretion of operators and considerable number of interventions was performed via radial route. All patients received 5000-10,000 units of intravenous unfractionated heparin, Aspirin 300 mg, clopidogrel 600 mg (loading dose), and Platelet glycoprotein IIb IIIa inhibitor. Thrombus extraction catheter, nitroprusside, and adenosine use were at the discretion of operators. All patients were prescribed Aspirin 300 mg, Clopidogrel 75 mg and Atorvastatin 20-40 mg daily at the time of discharge from the hospital. Patients were followed at 4th week, 3rd month and 6th month of procedure.
Data collection:
The prospective information on variables including age, gender, history of diabetes (defined as fasting glucose > 126 mg/dl or on treatment), hypertension (systolic blood pressure > 140/90 mmHg or on treatment), hyperlipidaemia (fasting cholesterol > 190 mg/dl or on treatment), Smoking, prior to PCI or coronary artery bypass grafting (CABG), presence of cardiogenic shock (defined as systolic blood pressure [SBP] of < 90 mmHg for atleast 30 minutes, or requirement of inotrops to maintain a SBP > 90 mmHg), need of intubation and/or Intra aotic balloon pump (IABP), angiographic and procedural details (culprit vessel, number of diseased vessels, use of stents, GP IIb IIIa inhibitors, Thrombolysis in Myocardial Infarction [TIMI] flow, and Tissue Myocardial perfusion [TMP] grade) and Electrocardiogram (ECG) findings were recorded. Timing variables were documented as follows: (1) Symptom onset to Emergency Room (ER) time was defined as the time interval between the onset of symptoms, as obtained from the history, and the time of presentation to the ER. (2) Door-to-Lab time was defined as the time taken for the shifting of patient into the Catheterization Laboratory from the point of arrival to the ER. (3) Door-to-balloon time was defined as the time taken for the first ballooning from the point of entry to the ER.
TIMI flow, TMP grades and ST resolution (on 12- lead ECG strips) were visually determined and documented by two independent observers before and after PCI and in case of controversy third expert opinion was taken as final. PCI success was defined as achievement of vessel patency to a residual < 30 %. Major bleeding was defined as a haematoma > 10 cm in diameter or bleeding requiring transfusion, vascular surgery or resulting in major morbidity. Patients were followed in out patients department (OPD) at 30th day, 3rd month and at 6th month. Those who did not come to the OPD, they were contacted via telephone and follow up documented. We failed to contact 12 patients. The primary outcome was to determine major adverse cardiac events (MACE) i.e. death, MI, CABG and re-hospitalization from the time of intervention till six months.
Data management and analysis plan:
Statistical Package for Social Sciences (SPSS) version 14.0 was used for data entry and analysis. The analysis was carried out two levels univariate and multivariate analysis. Mean and standard deviation (SD) were calculated for quantitative variable (age, door to balloon time, symptom onset to ER time, etc.) and proportions for categorical variables. Univariate logistic regression analysis was performed to measure association of outcome with each independent variable. Relative risk (RR) and 95% confidence intervals (CI) was calculated for each association. Associations among independent variables were assessed using appropriate test before performing multivariate analysis. Multiple logistic regression models were used to examine the association between the independent variables and the main outcomes variable, MACE in patients undergoing primary PCI for AMI controlling for the effects of other covariates. P-value < 0.05 was considered as statistically significant.

A total of 137 patients opted primary PCI out of them 113 underwent PCI and remaining 24 were excluded from the study due to significant left main or left main equivalent disease or severe diffusely diseased three vessel disease (3VD). 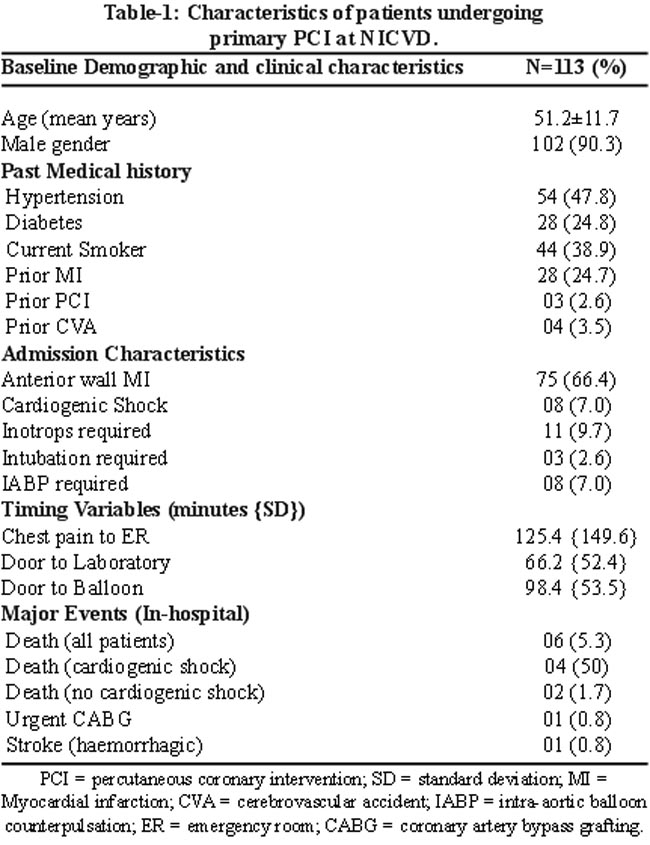 Table-1 shows the baseline demographic and clinical characteristics as well as hospital outcome of the studied cohort. The mean age was just under 52 years. Nearly half of our patients were hypertensive and approximately one-third were diabetic. Twelve (10.6%) patients presented with Killip III-IV out of them 7 % were in cardiogenic shock and we put them on Intra aortic balloon counter pulsation (IABP). The mean door to balloon time was 98.4±53.5 minutes. Six patients died in the hospital (5.3 %), and another two died during follow up. Major bleed occurred in one patient and one patient went for urgent Coronary artery bypass graft (CABG) surgery. 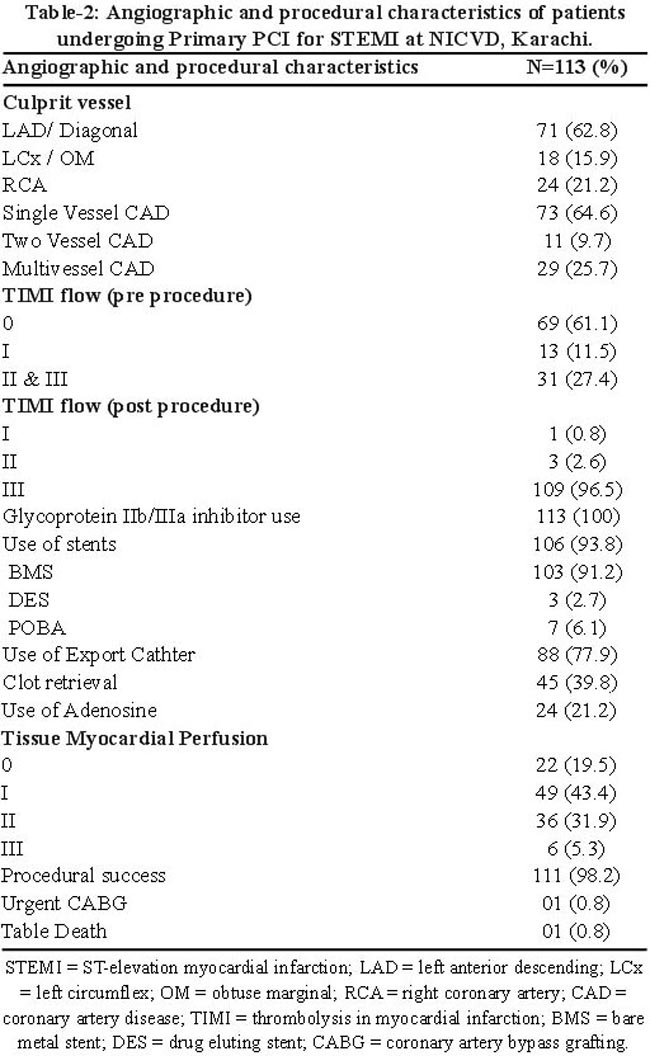 Table-2 shows the angiographic and procedural details of the patients undergoing primary PCI. Significant multivessel disease (defined as > 70 % lesion in > 2 epicardial coronary artries) was present in 35.3% patients. GP IIb/IIIa inhibitor was used in all patients and stenting was done in ~ 94% patients. Aspiration catheter for clot retrieval was also used in majority of patients (~ 78%). Procedural success was achieved in 98% patients. 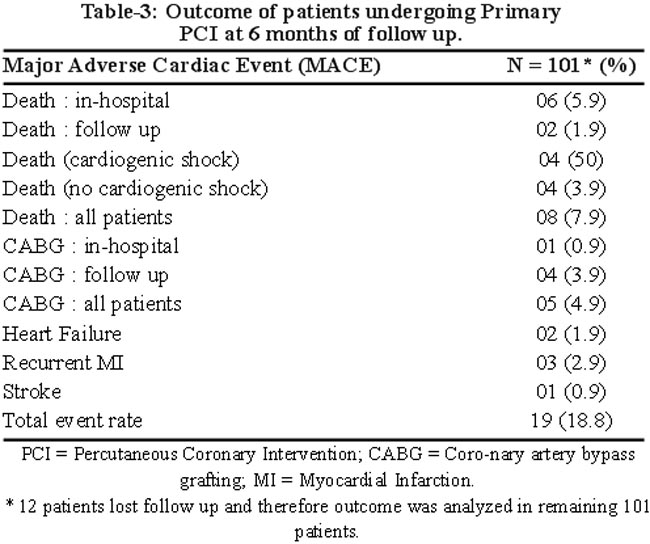 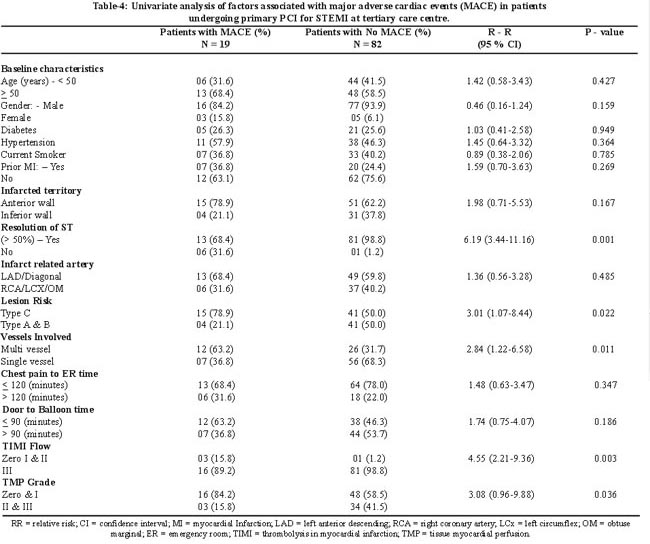 Table-4 shows the univariate predictors of adverse events in patients undergoing primary PCI at our institution with the associated hazards ratios and 95% confidence intervals. Five variables were associated significantly with MACE (p-values <0.05). On multivariate analysis out of these five variables only ST-resolution after primary PCI was found significant in association with MACE.

Table-5 summarizes the reported mortality rates for acute STEMI treated by primary PCI in other trials and registries.

This is the first report from the public sector tertiary care hospital of Pakistan that provides us the outcomes of primary PCI for acute STEMI. We demonstrate a high initial success rate and excellent short and long term survival, especially in patients presenting without cardiogenic shock. Our results compare favourably to western data and suggest the need of promoting the primary PCI as a first treatment choice for acute STEMI.