Objectives: To estimate the prevalence of Leprosy in Azerbaijan, Iran.
Methods: A total of 195 new leprosy cases referred to and registered in Bababaghi Center, Azerbaijan, Northwest of Iran from 1994-2009 were studied.
Results: Of the 195 new cases, 131 (67/2%) were males and 64 (32/8%) females. They were born in Azerbaijan with the peak age of the disease at their fourth decade. The most common form of the disease, especially in male patients, was lepromatous leprosy. Skin problems, especially eyebrow hair loss, constituted the most frequent sign of the disease. The most involved nerve was ulnar nerve.
Conclusion: Although, leprosy is a rare disease in Iran it is still encountered. It is important for the physicians to be aware of its diagnosis when they see a patient with chronic dermatitis and peripheral nerve involvement.
Keywords: Mycobacterium, Infectious disease, Dermatitis, Lepromatous, Ulnar nerve (JPMA 61:558; 2011).

Leprosy is a chronic granulomatous infection, principally affecting the skin and peripheral nerves, caused by the obligate intracellular organism Mycobacterium leprae.1,2 There were 407,791 new cases diagnosed and reported to World Health Organization in 2004.3 It continues to be an important health problem worldwide but is most prevalent in India, Brazil, Democratic Republic of Congo, Tanzania, Nepal, Mozambique, Madagascar, Angola, and the Central African Republic.4,5 The spectrum of illness ranges from tuberculoid (or paucibacillary) disease, characterized by relatively few (no more than 5) skin lesions and a marked cell-mediated immune response to M. leprae, to lepromatous (or multibacillary) disease, which exhibits multiple lesions and little cell-mediated immunity to M. leprae.6 At the tuberculoid pole, skin lesions are typically few in number, anaesthetic and hypopigmented, whereas at the lepromatous pole, the lesions are widely disseminated, sensate and minimally hypopigmented.6,7 Nerve damage can occur at any point in the clinical spectrum; it may occur early in tuberculoid disease, but tends to be more insidious in lepromatous leprosy.7,8 Patients can also present with acute inflammatory responses to M. leprae, called leprosy reactions, which can result in marked nerve damage and subsequent limb disability and deformity. The 2 common types of leprosy reactions are type 1 or reversal reactions, mediated by an upgrade in cellular immune responses to the bacterium, and type 2 or erythema nodosum leprosum (ENL), which corresponds to a systemic response to immune complex deposition created by dead and dying M. leprae. Reactions should be viewed as medical emergencies. Although few physicians in developed countries have expertise in leprosy, prompt recognition and treatment are essential to limit morbidity and loss of quality of life.7,8 We present the demographic characteristics, clinical types and manifestations of leprosy patients attending Bababaghi Center of Tabriz, Azerbaijan, Northwest of Iran.

Records of all patients with leprosy who presented to the Skin Disease Research Center of Bababaghi, Tabriz University of Medical Sciences from 1994-2009 were evaluated. Descriptive information was studied which included patient\\\'s age, gender and place of birth, type of skin lesions (maculae, papule, etc.), distribution of the lesions (generalized or localized), ocular lesions, cranial nerves involvement, peripheral neuropathy, eyebrow hair loss, involvement of nose or pinna, type of the disease including lepromatous, borderline or tuberculoid leprosy, histopathologic diagnosis of biopsy specimen(s) and finally the result of lepromin test. Diagnosis was clinical, by the findings of a cardinal sign of leprosy, and supported by acid-fast bacilli in slit-skin smears or typical histology on skin biopsy. Skin biopsy was reviewed by an experienced histopathologist. This helped in classifying the patient and excluding other diagnoses. Skin lesions were tested for anaesthesia. The peripheral nerves were palpated for thickening and tenderness. On the basis of World Health Organization recommendations (Table-1),

most patients with paucibacillary leprosy (indeterminate leprosy, TT or BT) were treated with dapsone plus rifampin; for a minority clofazimine was added. The majority of patients with multibacillary disease (borderline leprosy [BB], BL or LL) were treated with dapsone, rifampin and clofazimine triple therapy. Pre-treatment examination comprised of haematological (Ht, Hb and platelet count) and biochemical profile, lesion biopsy, bacillary index, serum antibody levels as well as several serum soluble markers of immune response, as well as neopterin levels were also measured. Data were analyzed with descriptive statistics and c2 analysis for comparing proportions of categorical variables. For multiple comparisons of proportions of categorical variables, the c2 distribution via contingency tables was employed. Means for continuous variables were compared with Student\\\'s t test. For subsamples with unequal variance the Kruskal-Wallis one-way analysis of variance was applied.

The clinical characteristics of the patients are shown in Table-2. 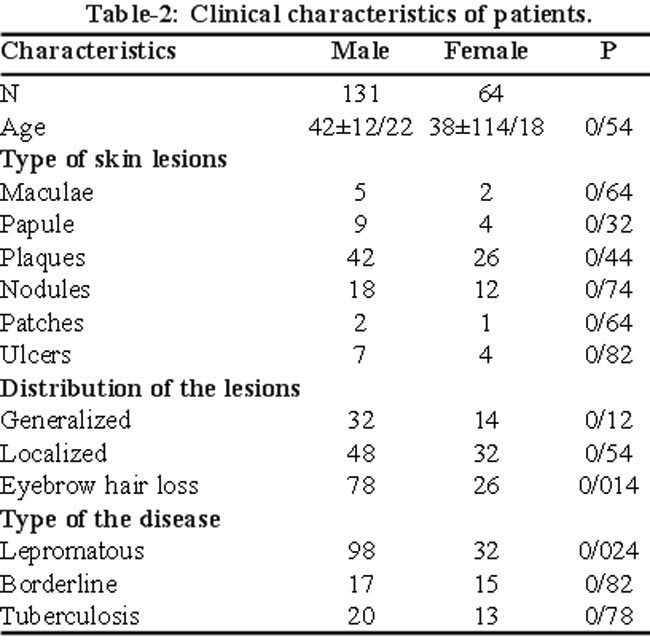 Most patients were 10 to 59 years-old and were predominantly male (Table-3). 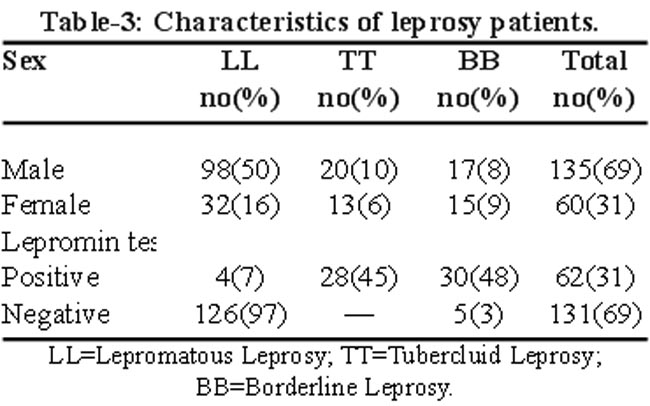 Patients experienced symptoms for a mean of 4 years before presentation to the Skin Disease Research Center of Bababaghi, Tabriz University of Medical Sciences. The prevalence of LL in men was significantly higher than women. Patients with lepromatous disease were older at presentation than those with tuberculoid disease. Lepromin test results are also summarized in Table-3. Of 62 patients with positive lepromin tests, 28 had tuberculoid leprosy, 30 borderline and 4 lepromatous disease. Negative results of lepromin test are more probable and are encountered in patients with lepromatous leprosy. Eyebrow hair loss was found in 104 of 195 patients of which 98 patients had LL and 6 borderline diseases. A significant relationship was found between lepromatous form of the disease and eyebrows hair loss. The frequency of cutaneous lesions were as the following: maculae in 7 patients, papules in 13 patients, plaques in 68 patients, nodules in 30 patients, patches in 3 and ulcers in 11 patients.

Table-4 shows the involvement of peripheral nerves with the ulnar nerve being the most commonly involved nerve. Chemotherapy was significantly effective in treatment paucibacillary and multibacillary patients. (p<0/05) Although lymphoproliferative responses to mitogens did not change significantly with therapy.

Iran is considered to be one of the endemic areas for leprosy in Middle East, but early registration, compliance with multiple drug therapy has led to the reduction of the disease. In this study we had 195 patients with lepromatous disease of whom 131 were males and 64 females with the prevalence of lepromatous leprosy being significantly higher in men than women. This observation was similar to those of Boggild and colleagues showing that of 184 new cases of leprosy they studied in Toronto, Canada (from 1979 to 2002) 122 (66.3%) patients were male.4 Our study demonstrated a positive correlation between age and shift towards the lepromatous end of the disease spectrum which is similar to the study by Rabhan et al.10 Also in Boggild\\\'s study this relationship was meaningful.11 A possible explanation is that debilitating nerve involvement occurs later in lepromatous disease than in tuberculoid illness, and patients may thus delay seeking care because they perceive their symptoms as benign. Toweir and coworkers carried out a study in Benghazi, Libya and found that 47% of their native patients were from Benghazi city and the rest from the Southeastern part of the country.11 In their report the number of the new cases had declined from 18 cases in 1994 to four patients in 1998 with the ratio of multibacillary to paucibacillary patients being 1.3/1 with the most common presentation of the disease being hypopigmented skin lesions.12 Although in our study the most common presentation was Eyebrow hair loss. Consequently, according to the place of patients\\\' birth, one third of our patients were from rural areas of Eastern Azerbaijan. Those at the lepromatous end of the spectrum tended to have symptoms, including motor and sensory neuropathy, for a longer period before diagnosis. This finding was similar to Kaplan and coworkers that in their study patients with lepromatous end had symptoms of neuropathy for a longer period before diagnosis.13 Clearly, this type of nerve involvement is an important cause of disability and lost productivity. However, these deficits are often ameliorable with multidrug therapy and corticosteroids. Lepromin tests performed here, indicated that cell mediated immunity to M.leprae was positive in tuberculosis and borderline leprosy. However, only four patients with lepromatous leprosy had positive lepromin test which might have been due to shifting of immune response from borderline leprosy to lepromatous leprosy. This finding was similar to those of Brown and coworkers.14 More involvement of ulnar nerve in our patients as well as of other studies seem to indicate that thickening of this nerve is a useful diagnostic criteria of leprosy.15 In contrast to our study Millan et al found chemotherapy with dapsone and rifampicin to be ineffective.16 But similar to our study Yawalkar et al and Cambau et al showed chemotherapy to be a useful mode of treatment.17,18

In summary, the diagnosis of leprosy should be considered in cases of chronic dermatitis with peripheral nerve involvement in foreign-born individuals, as well as those who have undertaken protracted travel abroad. Leprosy can be a complicated and challenging disease to manage. If suspected, referral to an expert or a dermatologist with expertise in leprosy is warranted. Although the incidence of leprosy has decreased in recent decades, however, it is still far from being completely eradicated.