Prevalence and causes of low vision and blindness in Tehran Province, Iran

Objective: To determine the prevalence and causes of blindness and low vision selected population at Tehran province, Iran in 2006.
Methods: A population-based cross-sectional study was conducted in the rural and urban population of Tehran province, Iran. The study design was based on the World Health Organization (WHO) criteria and a pilot study. Multi-stage cluster random sampling method was used and sample size was calculated based on the distribution of population in Tehran province derived from the national census and estimated rate of blindness from the pilot study. Information was collected using a questionnaire filled after screening by optometrists and referral examinations by ophthalmologists. Categorization of blindness and low vision was based on the International Classification of Diseases version 10 (ICD-10).
Results: Overall, 11,975 subjects with mean age of 27.77 ± 18.9 years participated (primary response rate of 90.4%). The prevalence of bilateral blindness was 1.09% (95% CI: 0.90-1.61%). There was a significant positive correlation with age (P<0.001) but no significant difference by gender. The prevalence of low vision in both eyes was 4.04% (95% CI: 3.69-4.39%). The prevalence of bilateral low vision increased with age (P<0.001) and was higher among females (OR = 1.42, 95%CI: 1.16-1.74). The leading causes of visual impairment were cataract (33.9%), amblyopia due to uncorrected refractive errors (22.7%), vitreo-retinal diseases (12.3%), corneal blindness (10%) and diabetic retinopathy (4.92%).
Conclusion: The prevalence of blindness and low vision in Tehran province, Iran is similar to other developing countries. The majority of cases have treatable and/or preventable causes; reduction of blindness can be achieved by appropriate screening strategies.
Keywords: Prevalence, Blindness, Low vision, Tehran, Iran (JPMA 61:544; 2011).

Every 5 seconds one person in the world goes blind. The World Health Organization (WHO) estimated that in 2004, 40-45 million people around the world were blind and three times or more had visual impairment, mainly in low-income countries. This figure is projected to reach 76 million by the year 2020 if no action is taken to further control blindness.1 This provided the basis for the launch of the VISION 2020 programme in 1999; the global initiative for elimination of preventable blindness.2 The prevalence of blindness and low vision varies in different communities ranging from 0.2 to 1.0 percent for blindness and from 1.1 to 3.0 percent for low vision by WHO sub-region.3 Globally, the main causes of blindness are cataract, glaucoma and age-related macular degeneration (AMD). Epidemiologic studies on the prevalence and causes of blindness and low vision started in 1995 and expanded to many developed and developing countries. The majority of these research projects were carried out according to WHO criteria and the International Classification of Diseases (ICD-10).4
Population-based prevalence data are critical for developing eye care programmes and for identifying areas for research.5 The absence of reliable population-based epidemiologic data on blindness and low vision in Iran is a serious problem which affects national planning to reach VISION 2020 goals in Iran. There are few published studies about the status of this problem in Iran. Until 4 years ago, there was almost no information on the prevalence or causes of low vision and previous studies have been mainly focused on the urban population of one city.6 The projected population of Tehran province in 2004 based on a national census was approximately 10.5 million. It is a province with 12 cities including Tehran, the capital of Iran. This study was conducted in a representative sample to determine the prevalence and causes of blindness and low vision in Tehran province, Iran.

A population-based cross-sectional study was performed in 2006 involving all inhabitants of Tehran province with a total population of 10.5 million. The study design was based on WHO criteria2 and our previous pilot study preformed in the rural and urban areas in the city of Karaj (a city with 1,160,000 population located 35 kilometers north-west of Tehran). The study implemented multi-stage cluster random sampling which included 138 randomly allocated clusters (118 urban and 20 rural, with 21 to 23 households in each cluster). Sample size was calculated based on the distribution of the total population in Tehran province derived from the national census and an estimated rate of blindness derived from our pilot study. Data were obtained from rural and urban health centers by completing a questionnaire including general information, results of optometrists\\\' and ophthalmologists\\\' examinations and the main cause of visual impairment. (The questionnaire was in Persian language and is available on request from the corresponding author).
Trained field interviewers completed the general information section of the questionnaire and visual acuity was obtained by trained optometrists using standardized Snellen E-charts with and without pinhole. Subjects with visual acuity equal or less than 20/60 in either eye were referred to ophthalmologists for determination of best spectacle-corrected visual acuity (BSCVA). Visual impairment was defined as BSCVA less than 20/60 and included low vision (BSCVA less than 20/60 but more than 20/400) and blindness (BSCVA less than 20/400). Main causes of blindness and low vision were determined and categorized based on ICD-10 criteria by ophthalmologists. More details on methods and implementation of study design have been published elsewhere.7 The center of disease control (CDC) in Iran approved this survey regarding methodology and ethical consideration. Informed consent was obtained from each participant or his/her guardian before enrollment.
Statistical analysis was performed using SPSS software version 11.5. The numerators for the prevalence of low vision or blindness were the sum of weighted cases for each cause of low vision or blindness. Age-standardized data were used to estimate the number of people with low vision, blindness, causes of visual loss and the prevalence for the entire population of Tehran province in 2005. 95% confidence intervals (CIs) were calculated using multivariate analyses (Figure). 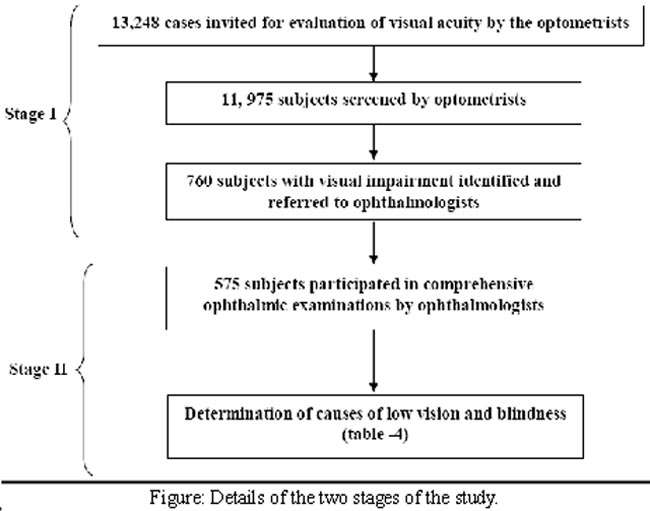 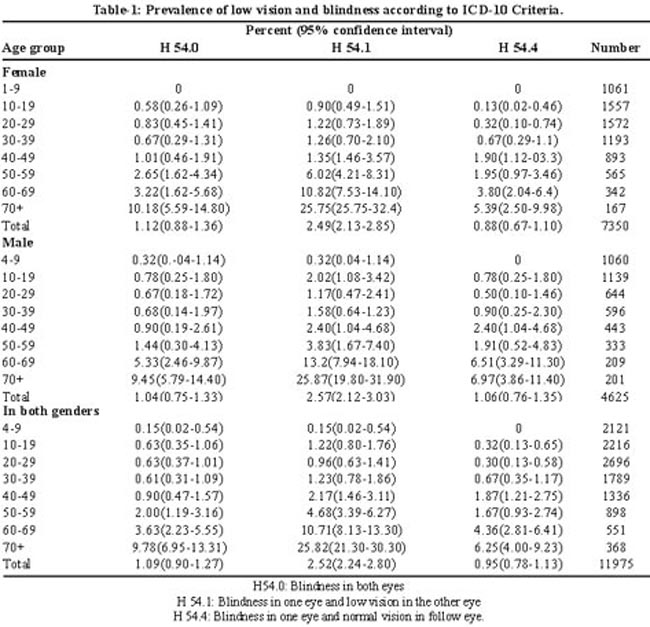 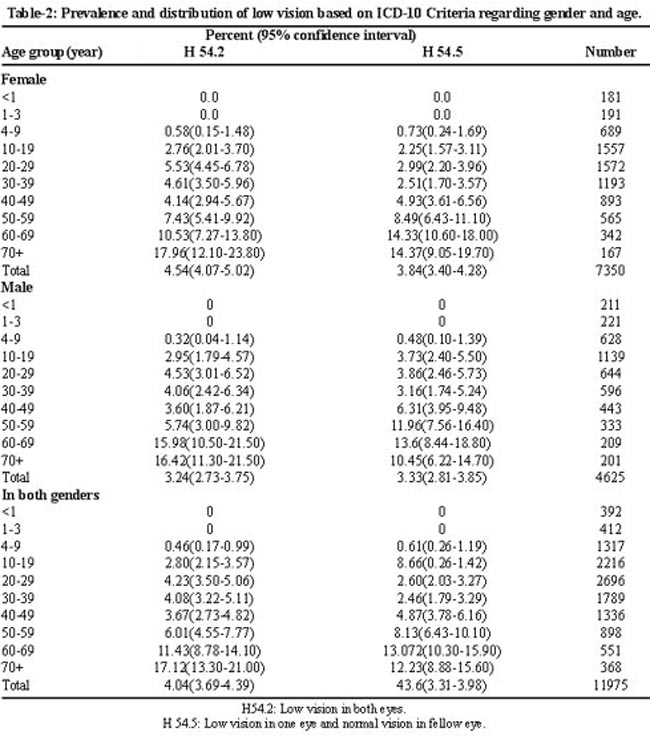 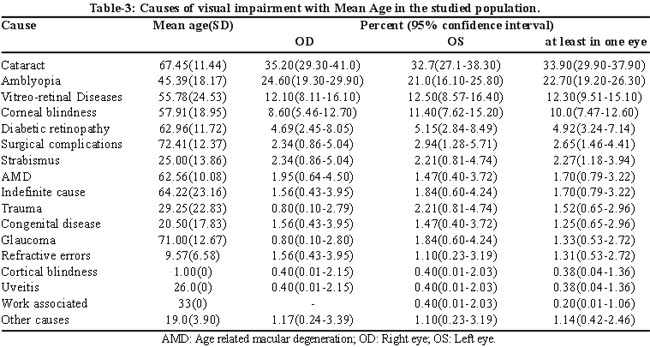 Table-3 details the causes of visual impairment in the study population.

This research project has been funded from a grant awarded by the Ministry of Health and Medical Education of I.R. Iran. The authors would like to thank all those who supported us and participated in this study.