When a patient comes for the evaluation of a focal brain lesion, it is often difficult to differentiate between tumoral and non-tumoral brain lesions and frequently creates a dilemma for physicians and surgeons for further management.1 Routine CT and MR scanning are the first line imaging modalities; however, it does not always provide more precise details and characterization of the lesions whether it is benign or malignant. Conventional imaging techniques do not provide exact information about vascularity, cellularity and metabolism of the mass lesion.1,2 Further work-up is needed if the results deem benign or equivocal on imaging. In contrary to that, more aggressive approach like surgery or biopsy is needed for malignant lesions.1-4 However, in many cases, true demarcation between tumoral and non-tumoral lesion is complex and even not possible. Thus lots of patients go through unwanted invasive procedures to rule out malignant lesions.
Magnetic Resonance Spectroscopy (MR Spectroscopy) is one of the tools used to determine the molecular structures of compounds or to detect the compound presence.4 MR Spectroscopy provides metabolic information from living brain. The major brain metabolites detected are choline, creatine, N-acetyl aspartate (NAA), lactate, myo-inositol, glutamine, glutamate, lipids and the amino acids leucine and alanine.5,6 Brain lesions show abnormal values of these metabolites as compared to normal tissue.
MR Spectroscopy is a potential tool for differentiating neoplastic from non-neoplastic brain lesions.7 Several studies have been done worldwide on role of MR Spectroscopy in characterizing and grading neoplastic lesions and differentiating them from focal non-neoplastic lesions like infarct, haemorrhage and infectious lesions. To our knowledge, no data has been published locally from our part of world, therefore, purpose of this study is to describe the role of MR Spectroscopy in focal brain lesions and determine its diagnostic accuracy using histopathology as the gold standard.

From 5th December 2006 till 12 January 2009, a total of 53 patients with focal brain lesion were referred to the department of Radiology, Aga Khan University Hospital, Karachi, for MR Spectroscopy examination. Most common clinical presentation was upper and lower limb weakness (28%) followed by headache (24%). There were 40 (75.5%) male patients while 13 (24.5%) were females. Overall mean age was 40 ± 18 years with a range from 4 to 76 years. For males, age ranged between 6 and 76 years with mean age of 41 ± 16 years while in females it ranged from 4 to 67 years with a mean age of 34 ± 22 years.
All the patients found to have focal brain lesions on conventional MRI sequences were included in the study. MR Spectroscopy was performed in all these patients after informed consent. Those patients who do not have histopathological analysis, were lost to follow-up or lesion was not suitable for spectroscopy on the basis of location, were excluded from the study.
All MR Spectroscopy was performed through single voxel technique. Initially, post contrast conventional MR imaging was done to localize the lesion and then voxel was placed on volume of interest. After water suppression, a point-resolved spectroscopy (PRESS) technique was used for localization and the studies were obtained with parameters including TE and TR of 135 and 1500 respectively. All the images were interpreted by consultant radiologists having experience in MR spectroscopy. Reporting was done on console as well as hard copies.
On the basis of Magnetic Resonance spectroscopy findings, lesions were categorized into neoplastic and non-neoplastic lesions. The spectra were analyzed for the signal intensity of NAA, choline, and creatine and for the presence of lipid and lactate peak. Ratios were manually calculated for Cho/Cr, and Cho/NAA ratio. NAA is a marker of neuronal integrity and peaks at 2.02 ppm. Choline is an indicator of cell turnover and peaks at 3.22 ppm. Similarly, creatine is involved in cell metabolism and peaks at 3 ppm. Lipid and lactate peak are normally absent in brain tissue and when present peak at 1.33 ppm and may overlap each other. Neoplastic lesions have elevated choline and reduced NAA peaks on MR spectrum with increase choline /creatine and choline/ NAA ratios. Reduced Cho, Cr and NAA peaks on MR spectrum are suggestive of non-neoplastic lesions. Cho/creatine and choline/NAA ratio are usually not altered in non-neoplastic lesions. Lipid and lactate peak can be seen in high grade tumours and also in infectious lesions. Lesion was also evaluated on conventional MR sequences before making the final MRS diagnosis. Final diagnosis was made on histopathology.
Data was entered using Statistical Package of Social Sciences (SPSS) programme version 16.0. Percent agreement between spectroscopy and histopathology for focal brain lesion in differentiating from neoplastic and non-neoplastic lesion was calculated by using kappa statistic. P value less than 0.05 was considered as significant. Sensitivity, Specificity, positive, negative predictive value and accuracy of MR Spectroscopy was calculated. Comparisons of mean value of neoplastic and non-neoplastic lesions were done by using t-test.

CT and MRI are sensitive tools for categorizing space occupying brain lesion, but they cannot really distinguish between neoplastic and non-neoplastic brain lesions. Through magnetic resonance spectroscopy, chemical structure of the lesion can be determined. MR Spectroscopy can help in differentiating neoplastic from non-neoplastic lesions.1-7 MR Spectrum was obtained from the focal brain lesion after placing appropriate voxel.8 Lesions can be categorized into neoplastic and non-neoplastic on the basis of certain criteria including Cho/Cr and Cho/ NAA ratio and choline and NAA peak on MR Spectrum.9,10 Lipid and lactate peak are also assessed on the spectrum.
Previous studies evaluating a heterogeneous group of patients, some with known prior tumour, some with unknown new masses, showed variable diagnostic test characteristics for MRS with sensitivities ranging from 79% to 100% and specificity ranges from 74% to 100%. The positive predictive values ranged from 92% to 100%, while the negative predictive values ranged from 60% to 100%.1,10-13 These figures are in close agreement with our study in which MRS showed a sensitivity of 93% and a specificity of 70%. Positive predictive value was 93% and negative predictive value was 70%. Diagnostic accuracy was 88%. 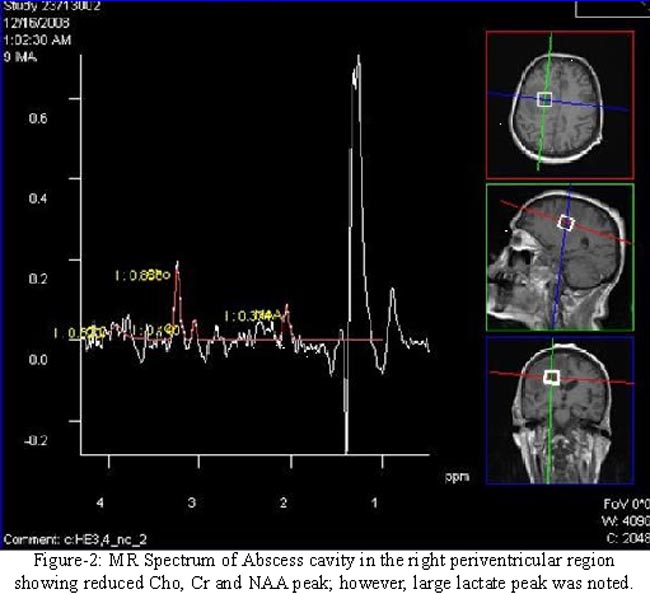 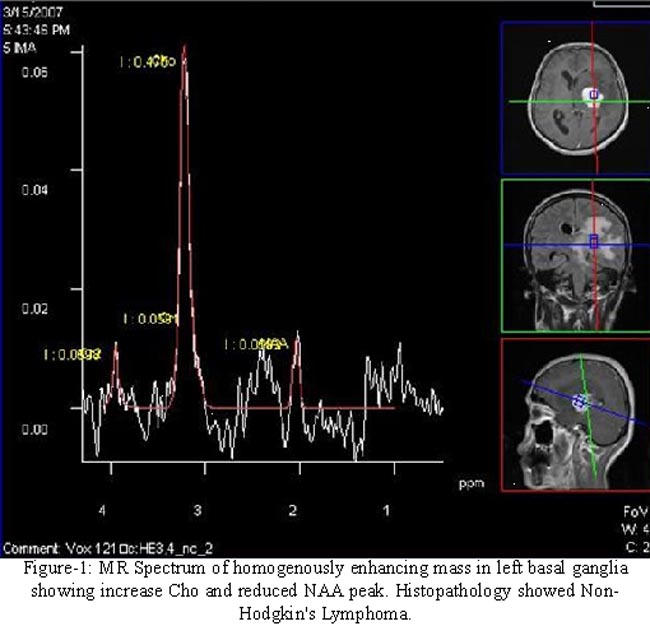 Neoplastic brain lesions usually show an increased choline peak, reduced NAA and the presence of lipid or lactate peak which are absent under normal circumstances. Increased Choline values (2.51 ± 1.8) mmol/l noted in neoplastic lesion compared to (1.41 ± 0.73) mmol/l in non-neoplastic lesions in this study with significant p-value which is in concordance with international literature.1,7,14 Similarly increased Cho/Cr (5.38 ± 6.10) and Cho/NAA (11.33 ± 16.3) ratio were observed in neoplastic lesions as compared to non-neoplastic lesions (Cho/Cr = 2.85 ± 2.47) (Cho/NAA = 3.15 ± 2.67) in this study with significant p-value of 0.005. Kumar et al15 reported high Cho/Cr ratio in high grade gliomas (3.50 ± 1.00) and meningioma (6.65 ± 2.83). Stadlbauer et al16 found increased mean Choline concentration of 2.86 ± 0.98 mmol/l compared to control group 1.91 ± 0.34 mmol/l in cases of gliomas. Tien et al17 showed increased Cho/Cr ratio (2.7 ± 1.3) in high grade gliomas.
Regarding non-neoplastic lesions, relative low value of Cho (1.41 ± 0.73) mmol/l are observed along with decrease Cho/Cr (2.85 ± 2.47) and Cho/NAA (3.15 ± 2.67) ratio. Kumar et al15 described mean Cho/Cr ratio of 1.34 ± 0.18 in tubercular lesions.
Lipid/lactate are relatively non-specific in differentiating neoplastic from non-neoplastic lesions as same can be found in both as described in results of this study and previous literature. Gupta R et al18 described the presence of lipid/lactate peak in both pyogenic and tuberculous abscesses, however, more frequently in tuberculous lesions. Kumar et al15 also described presence of lipid/lactate peak both in gliomas as well as tuberculous lesions. Kim et al19 also reported similar results.
Although high accuracy (88%) was noted in our results, there were 3 false positive and 3 false negative results. This could be due to various factors; one of them is voxel position. Voxel position is critical to the accuracy of MR spectroscopy findings.20 Placement of a voxel at the leading edge of an enhancing lesion appears to increase the likelihood of including viable proliferating tumour in the spectroscopy volume and to decrease the chance of including microscopic foci of necrosis. Another possible factor is due to lesions present in the periphery close to the bones or base of the skull are most likely to have increased noise, thus hindering accuracy of the spectrum obtained from the lesion.
Our study had few limitations. It is a single centre study and the sample size was small especially for non-neoplastic lesions. The reason for this may be that most lesions deemed non-neoplastic were not biopsied. Spectroscopy was performed through single voxel technique rather than multi-voxel. Inter-observer agreement for interpretation of spectroscopy images was not calculated. Increase spectroscopy costs as well as increase scanning time are also the potential disadvantages.

MR Spectroscopy is a highly sensitive tool; however, its specificity is relatively low in differentiating neoplastic from non-neoplastic lesions. Overall in our study the sensitivity, specificity, PPV, NPV and diagnostic accuracy was 93%, 70%, 93%, 70% and 89% respectively. Relatively, low specificity and negative predictive values makes MRS inadequate as the definitive diagnostic tool; however, it can be used as an additional tool prior to biopsy which is highly specific and sensitive. This modality should be considered as an adjunct to conventional imaging rather than replacement for histopathological evaluation.