Children experience sleep difficulties as adults do. These range from short-term difficulties in falling asleep and night waking to more serious sleep breathing disorders such as obstructive sleep apnoea.1 There is a consensus that up to 43% of children can experience a sleep problem at some stages during their development.2 A survey of more than 14,000 school-age children found sleep problems in 20% of 5 year olds, 6% of 11 year olds, and more than 40% of adolescents.1
Poor sleep pattern has important implications for the developing child. More recent researches in adults showed that an acute sleep deprivation of up to a week can have potential deleterious effects on the cardiovascular and immune system, glucose metabolism and endocrine function.1 In chronic cases it can impair growth, learning and emotional development.3 Thus, it is of high priority that health professionals understand the role of sleep and the ways to tackle sleep-related problems at an early age.2 Management of sleep disturbances in children and adolescents include behavioural therapy, pharmacologic intervention (anti-histamines, chloral hydrate, barbiturates), and herbal preparations. Currently, the Food and Drug Administration have not approved the usage of any hypnotics in children.1
Food and drinks may serve as stimulants and deter sleep. Both the timing4,5 and macronutrient content6-9 of meals are known to influence sleep. A meal consumed close to bedtime is associated with sleep disturbance.4 A number of macronutrients influence sleep through tryptophan (Trp) metabolism, which serve as the precursor of brain serotonin.10 The rate of brain serotonin synthesis normally depends on tryptophan concentration. because tryptophan hydroxylase, the enzyme that catalyzes the initial and rate-limiting step, has a very low affinity for tryptophan and is thus highly unsaturated at physiologic brain tryptophan concentrations.11 Brain tryptophan concentrations and the flux of tryptophan from blood to brain, depend, in turn, partly on plasma tryptophan and partly on plasma concentrations of > 6 other large neutral amino acids (LNAAs): tyrosine, phenylalanine, leucine, isoleucine, valine, and methionine,12 which compete with tryptophan for blood-brain barrier transport.11
As dietary carbohydrates (CHO) and proteins affect plasma concentrations of tryptophan and other LNAAs,13 these macronutrients may affect brain tryptophan concentrations and consequently serotonin synthesis and release.14 Dietary carbohydrates produce major, insulin-mediated decrease in the branched-chain amino acids\\\' level and a lesser reduction in plasma tryptophan causing a raise in the plasma tryptophan ratio13 and subsequently facilitating its entry into the brain.15 Thus, a high-GI meal would be expected to affect sleep via an increase in brain Trp and serotonin as the plasma Trp:LNAA increases.11
Considering the moderate to high prevalence of sleep difficulties in children, we proposed to investigate the effect of a night time milk drink of either low or high GI on the sleep pattern of healthy children.

Participants were 8 volunteer children 8 to 12 years old of gender (4 girls, 4 boys), weighing 36.33 ± 9.19 kg and a body mass index of 18.9 ± 2.21 kg.m-2. Tanner stages were assessed according to guidelines provided by Needlman et al.16 All children were without past or present histories of serious medical, neurological or psychiatric illnesses, any major sleep disturbances or parsimonies within 12 months of the study. They were also free of minor ailments and medications for at least 2 weeks prior to the sleep study nights.
The study was approved by the Human Research Ethics Committee of Sydney University. Parents of participants completed a two week sleep diary prior to the study, a consent form and the "BEARS" questionnaire, one of sleep screening algorithm in children.17 Each child underwent 3 nights of polysomnography (one familiarization and two test nights consecutively). On the familiarization night a full sleep study was conducted to exclude sleep breathing disorders and periodic leg movements. On the test nights, a low or high GI drink, given in a random order, was administered one hour before bedtime and after a standard meal of spaghetti. Two subjects had their test nights repeated.
The standard meal consisted of spaghetti (Australian white durum wheat, GI=58) with Leggo sauce (11.3 g fat, 3.7 g CHO and 5 g protein) and a piece of fruit, given 4 hours prior to the children\\\'s usual bedtime for all study nights. The high GI drink milk contained 200 ml of low fat cow\\\'s milk and with 1 tablespoon glucose (50 g of Australian Glucodin powder). The low GI drink milk contained 200 ml of full cream cow\\\'s milk with 1 tablespoon of low GI honey (50 g of honey yellow box) (Table-1).

The glycaemic load (GL) was calculated as (GI/100) × g per serving CHO. The GL was 7.4 and 52.8 for low and high GI drink respectively.
The participants were scheduled to sleep in the laboratory for three consecutive nights during the school year to achieve some control of daytime activity and sleep/wake schedules. Lights-out and wake time were calculated based on sleep diaries and reflected each child\\\'s habitual sleep onset and awakening. Children were therefore asked to retire and were awakened by the researcher, unless they awoke spontaneously before the designated wake times.
A full polysomnography with an international 10-20 electrode placement (C3/A2, O2/A1) was applied with electro-oculograms and electromyograms (chin and legs). Respiratory recordings included nasal airflow, thoracic and abdominal effort bands (strain gauge), and O2 saturation using pulse oximetry. All sleep data were recorded and stored on a computerized 16 channel polysomnographic system (Compumedics, Australia).
The sleep studies were scored blind by an expert sleep physiologist according to Rechtschaffen and Kales.18 The sleep indices included were: sleep onset latency (SOL), non-rapid eye-movement (NREM) sleep stages 1,2,3,4 and rapid eye movement (REM) sleep; REM sleep onset latency, total sleep time (TST), total wake time (TWT), sleep efficiency (SE), and arousals index (AI). Respiratory events (obstructive, central and mixed apnoeas, and hypo-apnoeas) were scored according to the criteria of ASDA.9
Non-parametric Wilcoxon tests were used to compare the sleep indices in high GI and low GI drinks. Data are reported as mean ± standard deviation (SD). The level of significance in all tests was set at p<0.05.

All children were within the normal weight and height for age and BMI within 95 percentile for their respective age and sex, and of Tanner stage 1 or 2. The children favoured the most, their standard spaghetti dinner given 4 hours before bedtime. They liked the taste of the low GI drink, but commented that the high GI drink were too sweet. 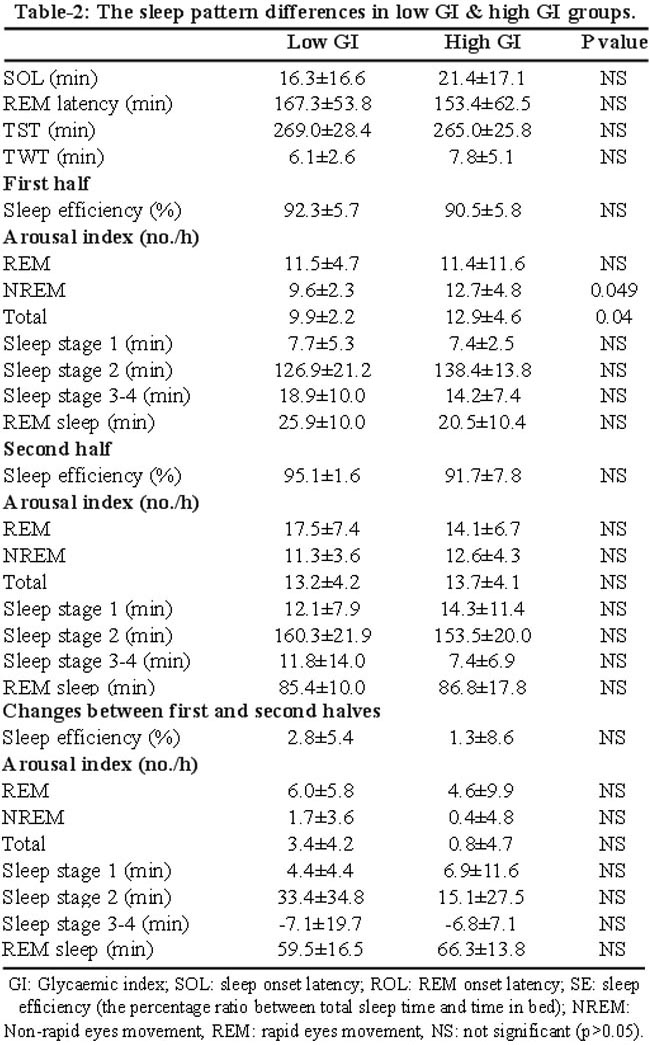 We found NREM and total arousal indices to be higher in those who consumed high GI compared to low GI drink one hour before sleep. Our subjects had not sleep disturbance and thus the potential for sleep " improvement\\\' was limited.
According to recent studies, high GI carbohydrates have the ability to increase the ratio of circulating Trp to LNAAs (Trp:LNAA) via a direct action of insulin, which promotes a selective muscle uptake of LNAAs.19 One of the studies supported the effect of tryptophan on sleep in newborn infants, compared the effect of dietary Trp and Valin (which competes with Trp for entry into the brain) on sleep patterns. Infants fed with the diet consisting of Trp had shorter sleep onset latency in both active and quiet sleep.9
The study conducted by Lyons20 showed that carbohydrates with a high GI, induce a greater increase in the plasma Trp: LNAA in comparison to those with a low GI. Accordingly, Trp entry into the brain in response to a higher Trp: LNAA would predict a greater synthesis of serotonin.21 On the other hand, it has been shown that a high Trp:LNAA resulted in a significant increase of platelet-poor plasma serotonin in humans21 and high brain serotonin in rats. Once in the brain, Trp is converted to serotonin, which is also spontaneously produced in the raphe system of the brain stem.22
In the study by Zammit G.A et al,23 twelve subjects were administered liquid carbohydrate meals at lunchtime on two consecutive days and nine subjects were used as controls and were deprived of a lunch meal. The study showed that lunchtime food intake does not promote the initiation of sleep, but it increases the duration of sleep episodes occurring during the postprandial period.23 Study of a low CHO diet on sleep behaviour in 6 healthy females showed no significant change in sleep time and stages except an increase in REM latency from 66±8 to 111±38 minutes.24 On the other hand, neither high nor low CHO diet affected the sleep parameters.
Porter and Horne gave three types of supplements with high (56 g glucose in 250 ml of orange flavoured water), low and zero carbohydrate 45 minutes prior to lights out as a snack for 6 healthy young adults. They found that a high CHO condition resulted in significantly reduced stages 1 + 0 sleep over the whole night and significantly increased REM sleep during the first half of the night; there seemed to be reciprocity between these two changes. High CHO also produced a whole-night significant decrease in stage 4 sleep, which persisted into the recovery night. Sleep onset time and another sleep stages did not affect with low CHO and high CHO supplements.7 These findings supported our results.
A recent study shows that high and low glucose loads administered one hour before bedtime did not change SOL, REM latency, TST and TWT. Although another study in our clinic25 showed that a high GI meal consumed 4 hours before bedtime resulted in a substantial shortening of SOL in healthy adults but SOL was significantly longer when high GI received one hour before bedtime. So it seems that the effect of high glycaemic intake in shortening SOL is seen when it consumed more than one hour before bedtime.25 According to our study results, the high GI drink when received an hour before going to sleep expresses its effects on first half night sleep pattern such as arousals rather than falling asleep.
In summary, consumption of high quantity carbohydrates close to bedtime is accompanied by frequent arousals and diminished sleep quality. Therefore, the interval between consumption of high glucose containing drinks and bedtime is better to be longer.

The authors would like to express their gratitude to Dr. Morteza Bashash, University of British Columbia, Canada for all his help and valuable hints in statistical analysis and all his interest and supports and to Dr. Behzad Lotfi, Dr. Leila Zahedi Shoolami and Dr .Masoud Ahmadzad Asl, Nikan Health Researchers Institute, Tehran, Iran, for their valuable help in analysis and interpreting findings and their support.