Tuberculosis of the prostate is a relatively rare condition and most cases are diagnosed on histology following prostatectomy1 or prostatic biopsy2. The incidence pf tuberculosis is high in Pakistan and there was. a recent resurge of tuberculosis in Europe, USA and Japan3. Cases of tuberculous prostatitis and abscess associated with human immunodefeciency virus (HIV) or acquired immune deficiency syndrome have been reported suggesting that this rare disease may increase in frequency.
We report two cases of isolated tuberculosis of prostate. The first case is unique in which a teenager presented with an acute urinary retention secondary to prostatic tuberculosis which has not been described in literature in this age group previously.
Case 1
A 17 years old boy presented to his general practitioner with an acute urinary retention. He had few weeks’ history of increasing difficulty in micturition. He was catheterized and his residual urine was over 500ml. A few days later trial without catheter by his GP was unsuccessful and he was referred to the urology department for management. On examination, he was apyrexial and general physical and abdominal examination was normal. On rectal examination his prostate was markedly enlarged, it was mildly tender with firm to hard in consistency. His blood counts were normal but his erthrocyte sedimentation rate (ESR) was raised at 55 mm in one hour. On urinalysis he had pyuria ( 25 - 30 WBC’s) and microhaematuria (5 - 6 RBC’s) but urine culture was negative. Routine biochemistry was normal. Transabdominal ultrasonography showed normal upper renal tract but his prostate was enlarged (5.6x5.9 cm) and its outline was irregular. Chest Xray was normal. Intravenous urography showed normal upper tracts while the bladder base was bit elevated. Mycodot was negative while Mantoux was positive with 5 IU. Urine was negative for acid fast bacilli (AFB) on three consecutive days. Prostatic acid phosphatase and prostate specific antigen (PSA) were normal. HIV tests were negative. At cystoscopy prostate was found to be markedly enlarged and occlusive with epithelial erythema. Bladder was mildly inflamed without any trabeculations. He was thought to have some inflammatory prostatic disorder and transrectal trucut biopst was carried out. Microscopic examination of the prostatic tissue showed granulomatous infection with caseous necrosis compatible with tuberculosis (Figure 1 and 2). 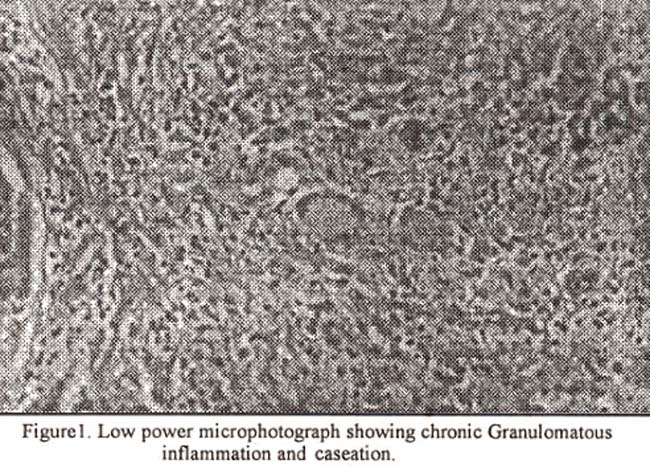 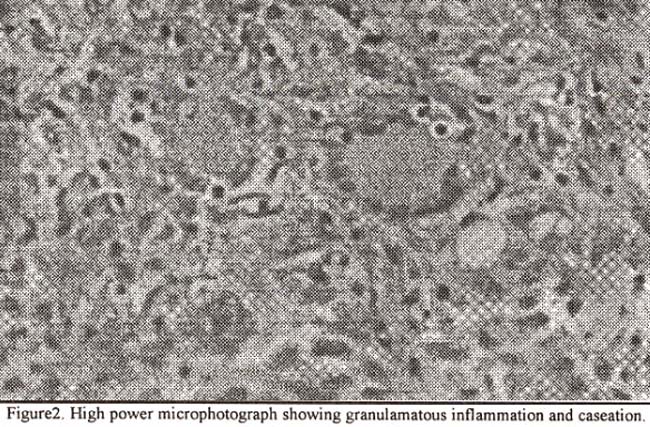 He was started on a ntituberculous treatment consisting of rifampicin/ethambutol/INH and pyrazinamide. This regimen was continued for 2 months. Afterwards pyrazinamide was omitted and other three drugs were continued for 7 months. During the follow up, in the first three months he had a bit of difficulty in micturition but all urinary obstructive symptoms settled afterwards. Now at over 2 years follow up, he remains well with no urinary symptoms. His only compliant is small volume ejaculate which he admits to have started 6 months before he had undergone cystoscopy. His ESR is 15 mm at 1 hour and prostate size on ultrasonography is 2.5x2.9 cm.
Case 2
A 55 years old patient presented with acute urinary retention. He had over six month history of increasing difficulty in micturition. He had no significant past history. General physical examination was normal. On rectal examination, prostate was enlarged and hard in consistency. His ESR was raised at 40mm in one hour but routine biochemistry was normal. Urinalysis showed pyuria (15-20 WBC’s) and microhaematuria (5-7 RBC’s). Routine urine culture was positive for E. coli and patient received antibiotics accordingly. Chest and KUB X-rays were normal. Abdominal ultrasonography showed normal upper tracts and an enlarged prostate measuring 4.9x5.2 cm. His PSA was 8mg/ml. Clinically he was thought to have carcinoma prostate. Transurethral resection of prostate was done and 40 gram tissue was resected. Postoperative recovery was uneventful. Histological examination showed granulomatos inflammation with caseous necrosis consistent with tuberculosis. He received 6 months antituberculous treatment. Follow up PSA at three months was normal (2ng/ml). At one and a half year follow up he remains well with no urinary complaints.

Tuberculosis of prostate is a rather rare condition. Cases of tuberculous prostatitis and abscess in relatively young patients with HIV infection have been reported4-7. But to our knowledge tuberculosis of prostate in an HIV negative teenager has not been published before.
Tuberculosis of prostate results from the haematogenous spread of the microorganisms from the lungs (or less often from skeletal system)1,8,9. It may also spread from direct invasion from urethra10,11 but this route of infection has been questioned9.
Tuberculosis of prostate is usually asymptomatic except in rare cases when the disease spreads rapidly and cavitation may lead to perineal sinus1. Early tuberculous lesions in prostate are seldom detected on palpation but when the disease is advanced, enlargement occurs and fluctuant tender zones may be felt bilaterally8. The disease may perforate into the urethra and extend into the urinary bladder12. With still further spread, sinus track may perforate into rectum, perineum and peritoneal cavity8.
Advanced lesions that destroy tissue may cause a reduction in the volume of semen, a sign that may help in the diagnosis13. In the present case 1, the patient had noticed marked reduction in the volume of semen for 5 months before presenting with urinary retention. Healing with calcification may- supervene and large calcification in prostate should suggest tuberculous involvement11. In the late stage, the prostate becomes shrunken, fibrotic and hard to the point that it may simulate carcinoma on palpation3,8,14. Both patients in the present report presented with urinary retention with hardened prostates.
Microscopically the initial lesion is in the stroma but it quickly spreads to the acini. Well differentiated lesions show confluent foci of caseation with incomplete fibrous encapsulation. There is little tendency for the formation of typical tubercles8. Use of intravesical BCG for bladder carcinoma may result in caseating or non caseating tuberculous granulomas in prostate15,16 and may be located along the periurethral or transition zone or involve the gland diffusely.
Urinalysis and routine urine cultures are normal. Tuberculin test is almost always positive but cannot be relied upon because of old age of the patients17. In the present case reports, Mantoux test was positive with 5 IU. Prostate specific antigen (PSA) may be normal or increased17. In case 1, both PSA and prostate acid phosphatase were within normal range but PSA was raised in case 2. In this patient PSA came down to normal i.e., 2ng/ml.
Transrectal ultrasonography (TRUS) of prostate may reveal enlargement and hypoechoic areas in prostate18,19. Using transrectal ultrasonography, guided biopsies for histological diagnosis can be taken19,20 and abscess drainage can be accomplished6,20.
Wong et al14 have demonstrated the clinical usefulness of contrast enhanced CT for the diagnosis of tuberculosis of prostate in which low density multiple and bilateral lesions with irregular borders are seen. Magnetic resonance imaging (MRI) for the diagnosis of the tuberculous prostate has been described18,21. MRI has certain advantages over CT including better resolution and multiplanner imaging capabilities. In prostatic tuberculosis, diffuse radiating streaky low signal intensity lesions are seen in prostate (watermelon skin sign) which are quite different from MRI findings of carcinoma of prostate21. Although imaging examinations may be helpful in the diagnosis, definite diagnosis must be made by either bacteriologic or histologic examination of prostatic biopsy.
Two important points for the clinicians regarding tuberculosis of prostate are firstly, viable organisms will frequently persist long after other parts of the genitourinary system have been sterilized22,23, secondly tuberculosis can be transmitted by means of infected semen in such patients24. Sometimes the diagnosis of the husband’s disease may be made only after the lesion has appeared in wife. A painful swelling of the inguinal glands in female that proves to be tuberculous should alert the clinician to the possible diagnosis of genital tract tuberculosis in the male partner25. Treatment of prostatic tuberculosis, once the diagnosis is confirmed, is complete course of antituberculous treatment9.
Although most cases of tuberculosis of prostate are diagnosed after prostatectomy but it can occur in healthy young males with no respiratory symptoms or immune deficiency condition. Probably several cases of tuberculosis of prostate remain undiagnosed. The presence of this rather rare condition must be kept in mind and appropriate investigations carried out to diagnose it.