This is a case-control study based on the chart review of the medical records. The study was conducted at the Aga Khan University Hospital (AKUH) Karachi, which is an academic tertiary care hospital. All infertile women• who attended the Outpatient Consulting Clinics of the Gynecology and Obstetric Department of AKUH from 1st January 1987 to 31st December 2000 were included as the study subjects. They were considered as infertile if they had not conceived after 12 months or more of unprotected intercourse15. Cases were defined as infertile patient with biopsy proven Genital Tuberculosis, being positive at least on histology, culture or cytology.
Tvvo types of controls were taken in the study i.e. PID and Endometriosis. The diagnosis of genital Endometriosis was made on the basis of direct Laproscopic visualization of Endometriotic spots or cyst, while PID was confirmed on the basis of Laproscopy. All other relevant concurrent etiological conditions of infertility were ruled out for both cases and controls. All those subjects that had either significantly missing records or in which cases Laproscopic examination was not performed were also excluded from the selection.
Sampling
After extensive review of the medical records, 43 cases were identified who fulfilled the selection criteria during that period. An equal number of both type of controls (PID and Endometriosis) were taken in order to avoid any influence by the imbalance in proportions in combined controls comparison. Among all the Endometriosis and PD patients’ records, 43 study subjects were selected randomly from records in each category that fulfilled the criteria.
The information was collected about the clinical presentation including menstrual history, physical examination, laboratory fmdings and Laparascopic features. The data was entered twice into the computer for verification. The data entry and analysis was done on Statistical Package of Social Sciences (SPSS) version 10.0. For analysis amongst comparative groups T-test for equality of mean, Pearson Chi- square test and Fisher Exact test were used accordingly to estimate the significance.

A. Comparison of Genital Tuberculosis with PID or Endometriosis alone 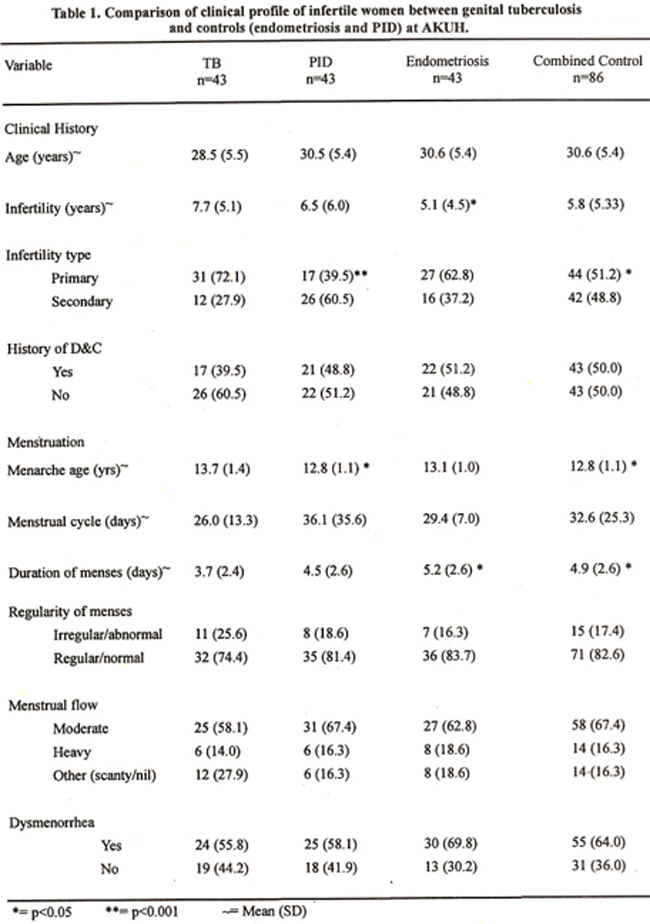 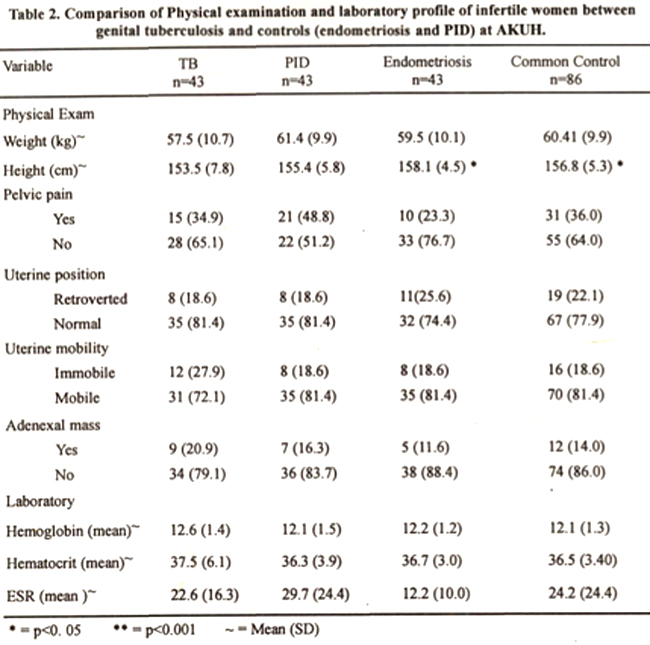 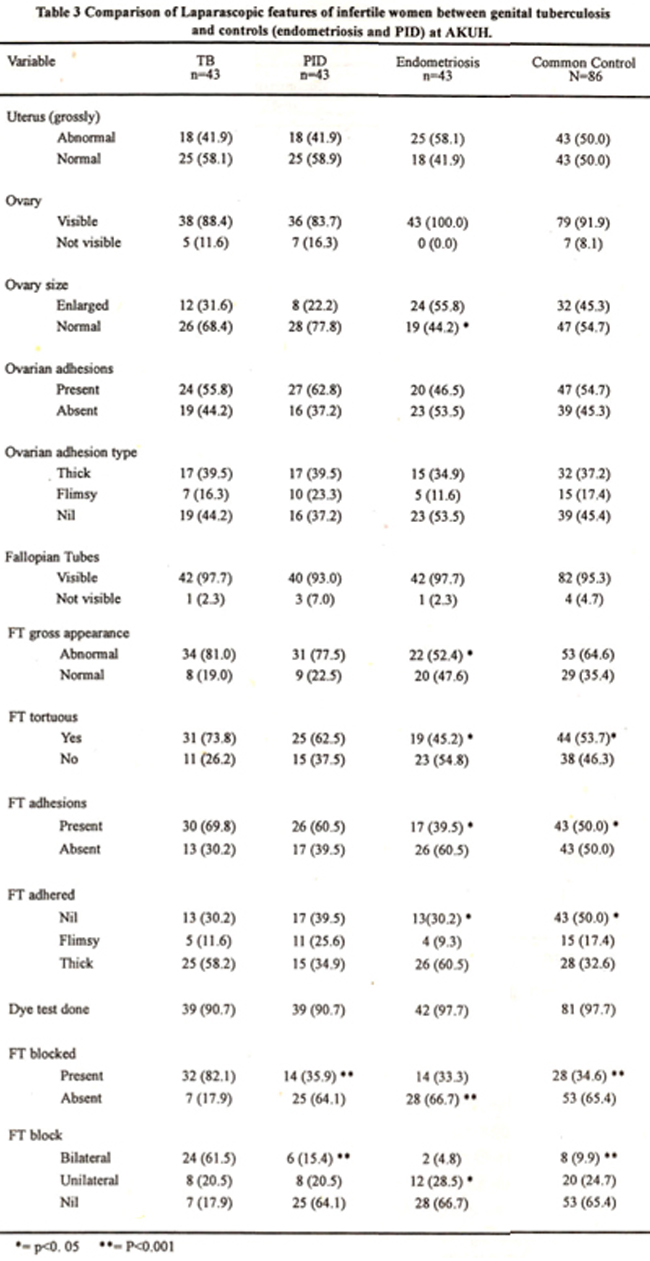 The literature on developing guidelines to evaluate an etiological diagnosis in infertile women is deficient, due to lack of appropriate controls to elucidate any differentiating features16. The use of healthy controls in research studies has also not been helpful in elucidating differentiating etiologies among common conditions such as infertility. Therefore, we directed this study to make comparison among the common etiologies of infertility by selecting genital tuberculosis as cases and comparing it with two other common categories (PID and Endometriosis) as controls. Besides comparing each control separately, the study also combined both the control groups and compared it with genital tuberculosis.
This comparison showed that some of the symptoms overlap in these groups of infertile women, however there are some useful differences among the patients as well that could help differentiate among these patients. Tuberculosis is a disease of compromised nutritional and immune status17. Relatively lesser height and late onset of menarche among the genital tuberculosis could also be due to chronic poor nutritional status, and consequently to their susceptibility to infection.
Infertility is the commonest presenting symptom in the genital tuberculosis patients18 and the study confirms this finding. Primary infertility is more common in these patients as compared to Endometriosis and PID. Except for the excessive duration of menstrual bleeding, no other feature of menstrual history can reasonably differentiate between these infertility-related conditions and it is more common in Endometriosis patients19.
Among the laboratory tests, raised ESR is always significantly associated with the genital tuberculosis20, but this fmding is valid only when comparison is made against healthy controls in some studies. No other single baseline blood profile or physical examination gives distinguishing information for diagnosis among different causes of infertility studies.
In laproscopic examination, three main female genital tract organs involved in infertility were considered, uterus, ovaries and fallopian tubes. No uterine characteristic in our study sample differentiated studied pathologies. However, ovarian size was significantly enlarged in Endometriosis compared to the Genital Tuberculosis. Fallopian tubes are the initial site of involvement in genital tuberculosis and it is invariably affected in 100 percent of cases. It initially affects the mucosa and finally spreads beyond the wall of the fallopian tubes resulting in extensive scarring and adhesion formation. This could either block the fallopian tubes completely or it damages the mucosa and cilia and impairs its function4,21. We observed the same fmding in this study. Extensive adhesion and tortuousity due to scar formation were observed in Genital Tuberculosis compared to the other two conditions. The most striking feature was significantly greater proportion of bilateral blockade of fallopian tubes due to tuberculosis compared to Endometriosis and PID.
Therefore, to summarize, the presentation of a patient who is chronically malnourished with primary infertility complaints, massive adhesions and fibrosis in the pelvic region on Laproscopic examination, should be provisionally considered as Genital Tuberculosis and should also be further evaluated accordingly.
Financial burdens of tuberculosis are enormous, as it requires exhaustive diagnostic plan and prolonged treatment regimen. Indirect cost of inability to work, simultaneous stigmatization of tuberculosis and infertility gives another dimension to the burden of disease22. Timely identification of such patients is required in a cost-effective manner.
Early diagnosis of genital tuberculosis is difficult23. The spectrum of clinical features, physical examination and laboratory investigations elucidated, will help in differentiating it from the similar conditions that cause infertility among females such as PID and Endometriosis. It is often not clear to investigators as to what particular features are attributed to patients with infertility with different diseases and general deficiency regarding it in medical literature.
Although, the three conditions (genital tuberculosis, PID and Endometriosis) studied, often present with infertility in women, they have different treatment modalities. These findings could also help in selection of appropriate treatments based on their probable results and costs to conserve resources. These could help improve the diagnostic ability of general practitioners and gynecologists involved in establishing the etiology of infertile women in Pakistan. In addition they are also useful, especially for underdeveloped countries, where tuberculosis is widespread and genital tuberculosis is a common etiology for infertility24.

We would like to thank Dr. Nadeem Zuberi of Gynecology and Obstetrics Department of AKUH for his guidance and assistance in the process of data collection.

Selection Procedure as Predictor of Performance in University Examination

Development and Testing of an Assessment Tool for Integrated Learning