Development and Testing of an Assessment Tool for Integrated Learning

A number of curricular changes have been instituted through multiple reviews of the content and instructional strategies at the Aga Khan University Medical College(AKU), Karachi, Pakistan. The principle reason for these changes has been to aspire students away from memorising (rote learning) a wide variety of facts about each discipline. Nevertheless, examinations are still held for each subject separately and mainly consist of single best questions, which do not necessarily assess understanding1. This subject orientation of examination questions with intent of testing recall, tends to drive students to work for summative examinations2. It has also been reported that students could not retain the memorised information of basic sciences even after fifteen days of the certifying examinations3.
In similar curricular environments, Patel and Evans3 found that medical students were unable to solve patient problems even when specific basic information was provided to them. Similarly residents of a large medical hospital were in 50% of the cases unable to perform critical clinical procedures, yet when tested on this subject by virtue of multiple choice questions, performed quite well (mean 82%4). These and many other incidents indicate that lalthough students score more or less brilliantly in examinations, they possess little ability to think and apply the acquired knowledge5-7 suggesting that we do not necessarily test students on what we expect them to perform or apply in their practice.
Since students’ learning activities are directed towards the content of examinations, interventions in assessment content and format can be used as a positive force both for teaching and learning8. However, successful interventions to change learning will more or less depend on the student’s perception of the demands of learning context in relation to the intervention.
The development and use of multiple choice (questions) items capable of testing integration of basic and clinical sciences concepts, higher level reasoning skills and problem solving has been reported9-12. On the other hand, it seems that in most of such questions the context has been used to add a flavour of clinical situations to the items. Analysis of these test items depicts that they are independent of the contexts portrayed in the scenarios. An exception is the Case Cluster questions developed by Case and Swanson11. The integrated questions developed at the Aga Khan University were tested with the hypothesis that students’ scores in integrated questions would correlate positively with their certifying examination scores.

The pilot
This was conducted in 1997 at the time of the third and final year examinations, held in June and September 1997 respectively. Integrated single-best questions (Appendix) were formulated to probe the thinking process and understanding of integrated concepts. These questions were administered after the respective certifying examinations. Scores obtained in integrated questions were correlated with the scores of certifying examination.
The study
Materials
A generalisable format for construction of questions was developed. The questions were based on case scenarios, representing common problems and required reasoned responses. Five to six multiple choices (single best) item sets followed each case.
b) Construction of the questions
Initially, concepts considered important and related to the specific presentations and problems were highlighted. Cases were then developed to provide the relevant data to accentuate the identified objectives. Questions were subsequently formulated to assess students’ ability to integrate and think by analysing the provided information. Each case was followed by three to six related questions probing different aspects.
c) Format of the questions (Figure) 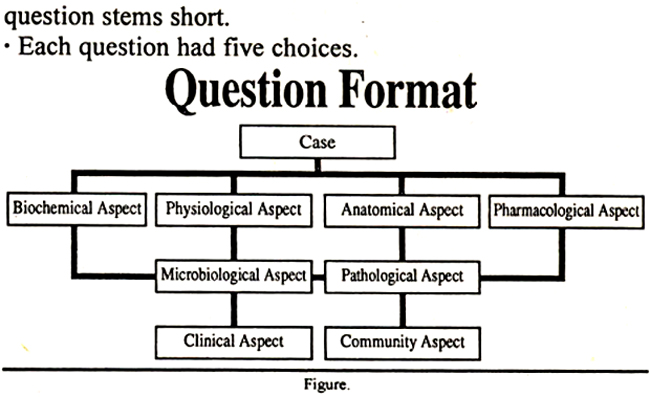 Whilst scenarios were used, efforts were made to keep
question stems short
Each question had five choices.
Procedure
Pilote
a) The integrated questions were administered to students immediately after each of their certifying examinations at the end of the third and final years.
b) The study: The questions were introduced in the continuous assessment examinations of third year from the academic year 1998-1999 and subsequently in the final certifying examination as 33% of the whole paper.
Problems
Although Pamphlet and Famill13 report that anxiety is not associated with performance in multiple choice examinations, faculty resisted incorporation of these questions into the main body of the paper to avoid extra stress for students.
Analysis
I. Scores of the two examinations (certifying and integrated) were correlated (Pearson’s t-test).
II. Cross tabulations were made to determine the number of students who had performed differently in the two examinations (Chi-Square test and paired t-test).
III. Reliability of the integrated questions and the certifying examination questions was determined by calculation of internal consistency of the whole papers (Cronbach’s Alpha).

Response Rate
One hundred and twenty-six (complete populations of the two classes), undergraduate medical students of the third year and final (fifth) year, were invited to participate, after informed consent. All sixty-eight students of third year (n=68) responded to integrated questions, but answers of sixty (n = 60) students were complete (88%) and were included in the study. Though all fifty-eight students of the final year participated, 54 (91%) filled the response sheet validly for inclusion in the study. Hence the total number of students included was 113 (90%) of the total population of the two classes.
Comparison of Cohorts of Scores (pilot)
A large difference in the means and standard deviations of the two classes in both assessments was depicted. However ranking according to the means remained approximately the same. The overall correlation coefficient (r) for the individual scores of exams and integrated questions within the same classes of third year and final year was 0.23, 0.33 (P=>0.01) respectively. For final year t-test for correlated means was significant (p=>0.0l) whereas ANOVA for final year also depicted significance for fmal year correlation (F=6.377, p=>0.0l). Distribution of students class ranking in the two examinations, showed a statistical significance for final year. (Chi square p=0.049).
Comparison of Cohorts of Scores (Study)
When the scores of traditional MCQs and the integrated MCQs were correlated, statistically significant associations (p=>0.001) of 0.71 (Pathology), 0.68 (Pharmacology) and 0.71 (Microbiology) were found. The changes in scores were also statistically significant (paired T-test p=>0.001). Frequency distribution of students according to grouped scores also showed statistically significant changes (Table 1 and 2)

(chi square p=>0.00l with df=2). The middle group depicted a most stable performance.

Selection Procedure as Predictor of Performance in University Examination