Leaking pseudoaneurysm of hepatic artery: a potentially life-threatening complication of a common procedure

Despite the increasing frequency of laparoscopic cholecystectomy for gallstones, vascular injuries are uncommon complications of this procedure and only a few cases of pseudoaneurysm of hepatic artery have been reported in the literature. Bleeding from pseudoaneurysm of hepatic artery may lead to life-threatening situation, if a prompt diagnosis is not made. The diagnosis and treatment of this infrequent situation needs to be emphasized in clinical literature to increase the awareness of general physicians and practicing surgeons.
The case of a 54 year old female with leaking pseudoaneurysm of the hepatic artery, managed successfully is presented.

A 54-year old female, a known diabetic and hypertensive, presented with three months history of intermittent rectal bleeding. She underwent an elective laparoscopic cholecystectomy five months back for symptomatic gallstones. The surgical procedure was apparently uneventful and the patient was discharged home the day after surgery. Rectal bleeding was initially in the form of intermittent maelena which later became more frequent with some fresh blood mixed with stools. She also had an episode of haemetemesis one month before her presentation to our hospital. She had no history of abdominal pain or weight loss but complained of lethargy. Her diabetes and hypertension were well-controlled on insulin and atenolol, respectively. She was admitted to other hospitals for a couple of times in last three months to investigate the cause of rectal bleeding. Her work-up included colonoscopy which was reported as normal except for a small rectal ulcer. Her rectal bleeding was assumed to be due to a bleeding peptic ulcer as she had a history of use of non-steroidal anti-inflammatory drugs for her knee pain and was managed with proton-pump inhibitors.
A day before coming to our hospital, she presented to another hospital with a fresh episode of significant rectal bleeding. At the time of presentation, she was found to be haemodynamically unstable and anaemic. Her abdominal examination was unremarkable except for the small laparoscopy scars. Her haemoglobin level had dropped to 5 mg/dL, but other laboratory work-up including liver function tests were within normal limits. After resuscitation, an upper GI endoscopy was done which showed an ulcer in first part of duodenum (D1 segment) with a blood clot. A pulsatile mass was observed deep to the ulcer. Subsequently, an abdominal CT scan with contrast was carried out which demonstrated a 2.5cm contrast-enhancing pseudoaneurysm of the right hepatic artery (Figure-1). 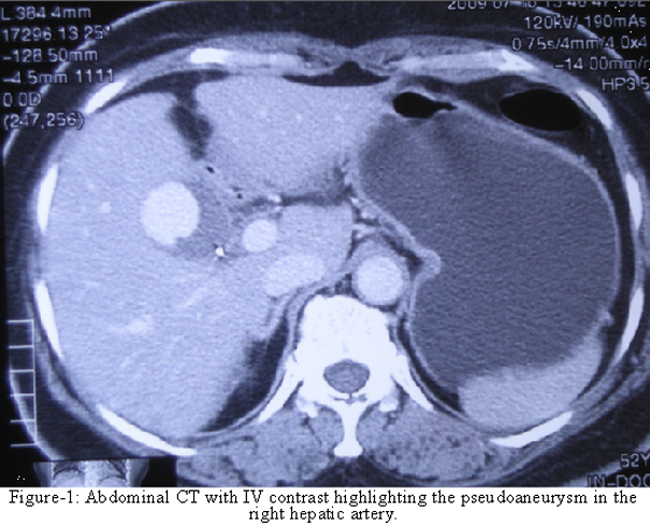 The patient was subsequently shifted to our hospital where further resuscitation with blood products was carried out. She was planned for an emergency mesenteric angiography. Access was gained through the right femoral artery and selective cannulation of coeliac trunk and hepatic artery was done. Initial angiogram revealed a pseudoaneurysm arising from the segmental branch of right hepatic artery. The segmental branch was super-selectively cannulated using the micro catheter technique. This was followed by placement of multiple coils distal and proximal to the pseudoaneurysm. Final run of contrast showed no residual filling of the pseudoaneurysm (Figure-2).

Patient remained stable after the procedure. Omeprazole was continued orally and she was started on iron and folic acid supplements. Her haemoglobin level showed a rising trend over the next few weeks. An abdominal ultrasound done four months after the procedure was normal with absent gall bladder.

Laparoscopic cholecystectomy has taken over open surgical techniques for gall bladder removal and has proven to be safer with lesser post-operative complications and recovery time. Despite the well documented safety of the surgical procedure, biliary and, uncommonly, vascular injuries are still likely.1 Vascular complications may include vessel laceration, transection and occlusion, and can be caused by either direct trauma or thermal injury due to inadvertent use of electrocautery.2 A pseudoaneurysm is usually formed when the wall of an artery is disrupted and blood is forced into surrounding tissues, creating a haematoma or an inflammatory mass. Among the reported cases of pseudoaneurysms resulting from upper abdominal surgeries, laparoscopic cholecystectomy bears the burden of the most.3 This could occur anywhere in the hepatic and cystic arteries.4,5 Variant biliary anatomy and conversion to open surgery are possible risk factors,4,6 though our patient had neither of these. If the pseudoaneurysm communicates with the biliary tree, patient would present with haemobilia.
Incidence of right hepatic artery pseudoaneurysm is rare and has been reported as up to 0.6% in previous literature.3 Time of presentation varies from first few days to months after surgery.2,4 The presentation differs widely as well, from mild symptoms of abdominal discomfort with or without jaundice and anaemia, to gross haemorrhage due to rupture resulting in life threatening gastrointestinal bleeding, acute abdomen and/or liver infarction.7-9 The mode of presentation, to some extent, depends on the size of the pseudoaneurysm as larger ones have greater risk of rupture.4
Endoscopy is usually the initial investigation of choice when the presentation is of GI bleeding though it is often inconclusive.4,10 In our case, a pulsating mass was observed which prompted further investigation. Contrast CT scan, dynamic CT angiography and Doppler Ultrasound are other modalities that can point to diagnosis, however, visceral angiography is considered the gold-standard.1,8 It also enables localization of the vascular defect and treatment by embolization.10 Success rates of pseudoaneurysm obliteration are also high in angioembolization compared to open vascular repair with fewer complication rates.1,3
This case elicits a rare but possibly life-threatening complication of a very common surgery. High index of suspicion is necessary to diagnose pseudoancurysm after laparoscopic cholecystectomy. Treatment with angioembolization is the best available option.

Schwannoma of the tongue in a ten-year old child