Massive pulmonary embolism (PE) is a life threatening situation that mandates urgent diagnosis and treatment. However, the non-specific nature of the presenting signs and symptoms pose diagnostic challenges for the physician. In addition, a prior history of respiratory tract diseases and smoking can considerably confound the clinical picture due to competing diagnosis.
Most cases of pulmonary embolism can be managed with medical therapy alone. However, surgical intervention may be indicated in certain instances. We describe one such case of acute massive pulmonary embolism in a 52-year-old man that was managed successfully with open embolectomy.

A 52-year-old male patient, with a previous history of chronic obstructive pulmonary disease (COPD), presented to the emergency room (ER) at Aga Khan University Hospital with progressively increasing dyspnoea for three days. There was no history of accompanying pain, syncope or haemoptysis. He was an active smoker and had a history of multiple ER admissions for COPD exacerbations in the last few years.
The patient was in clinical/overt respiratory distress. His heart rate was 140 beats per minute, blood pressure was 100/70 mm Hg, respiratory rate 32/minute and O2 saturation 88% on room air. He was afebrile at that time. On examination, he had bilateral wheezing and was using his accessory respiratory muscles. Heart rhythm was regular without any additional heart sounds or murmurs. There was no tenderness on palpation. Electrocardiography was unremarkable except for sinus tachycardia. Chest X-ray showed bilateral lower lung zone infiltration. Arterial blood gas analysis showed pH of 7.36, PCO2 of 39 mmHg, PO2 of 56 mmHg and a base deficit of - 1.4.
He was initially treated as a case of COPD exacerbation secondary to pneumonia. However, despite optimum medical management for pneumonia and COPD exacerbation, his oxygen saturations dropped to 80% on 10 liters of oxygen within a short span of four hours. Emergent CT scan of chest was done to better delineate the underlying disease process; it showed bilateral massive pulmonary emboli (Figure-1).

By this time the patient\\\'s systolic blood pressure had dropped to 70 mm Hg. Cardiothoracic team was consulted and the patient was immediately shifted to the operating room where under cardiopulmonary bypass, he underwent bilateral open embolectomy (Figure-2). 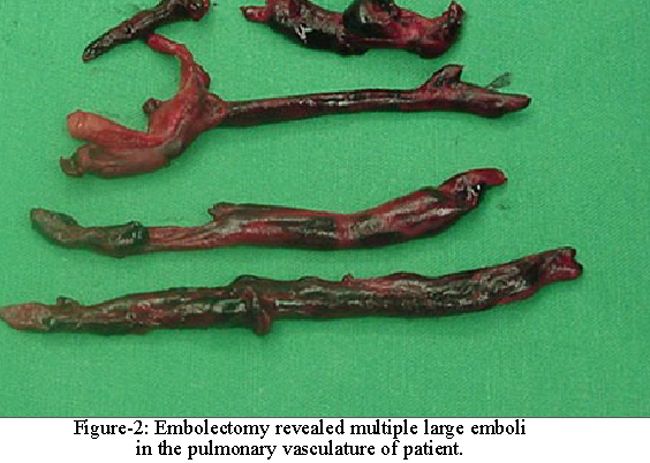 Following surgical intervention, the patient made a remarkable recovery. He was extubated within 24 hours and discharged on warfarin on the eighth post-operative day. He has been maintaining regular follow-up as an outpatient and is currently doing well at 3 years follow-up.

Massive PE occurs when there is obstruction of the pulmonary arterial system exceeding 50% of the cross-sectional area.1 Alternatively, massive PE may also be defined as being associated with right ventricular dysfunction or a systolic blood pressure <90 mmHg or a drop in systolic blood pressure of  40 mmHg from baseline for a period >15 minutes.2
Massive PE is associated with a high mortality rate and the interval from the onset of symptoms to death is brief. In patients with massive PE, 50% patients die within 30 minutes, 70% die within 1 hour, and more than 85% die within 6 hours of the onset of symptoms.3 Therefore, time is truly the essence. As death frequently occurs within the first few hours after admission, a rapid and specific diagnosis is essential. The clinical diagnosis is, however, difficult to reach due to the nonspecific nature of the symptoms and signs of PE as seen in our patient where an initial suspicion of pneumonia and COPD exacerbation considerably delayed the diagnosis. The diagnostic dilemma is further complicated by the fact that rudimentary investigations including routine blood, arterial blood gas measurement, electrocardiography and chest radiography all lack specificity; thereby limiting their utility in reaching a definitive diagnosis.4 These investigations maybe more helpful in ruling out other competing diagnosis.5 The differential diagnosis for PE can span a long list including pneumothorax, pleuritis, pneumomediastinum, pericarditis, acute myocardial infarction, aortic dissection, esophageal rupture, lung cancer, rib fractures and metastatic deposits.4
In the absence of absolute contraindications, most authors have recommended the use of thrombolysis for patients with acute massive PE who present with shock. In such patients, thrombolysis has been reported to achieve reasonably good outcomes.6,7 On the other hand, Tayama et al have recommended that surgical intervention should be strongly considered instead of thrombolysis for patients whose condition worsens despite intensive medical treatment.8 Generally, the rate of failure with thombolytic treatment has been observed in upto 20% cases.9
Currently a few indications for surgical embolectomy have been outlined in the literature. These include contraindications to thrombolytic therapy, presence of persistent thrombi in the right heart or pulmonary arteries, or deteriorating haemodynamic status. Early surgical intervention in such situations may be associated with a survival benefit.1,10 We performed surgical intervention in this particular patient because of rapid and progressive decline in haemodynamic function.
However, caution needs to be exercised as emergency embolectomy has not been uniformly associated with holistically favourable outcomes in current literature. At the same time, it is also important to note that such unfavourable results may have been confounded by the presence of other co-morbidities in such patients as well as by the delays in diagnosis due to competing diagnosis.5
We feel that surgical intervention, as a therapeutic option for pulmonary embolism, maybe underutilized and more studies are certainly warranted in this arena in the future. A well-designed comparison of outcomes between surgical and thrombolytic interventions in patients with acute massive pulmonary embolism should be carried out in this regard. There is also a need to revise and possibly expand the current indications for surgical intervention in pulmonary embolism as the outcomes from surgery in certain selected patients may show a more favourable trend when compared to medical therapy. Surgical embolectomy, therefore, should not simply be considered as a treatment of last resort but may warrant earlier consideration in certain cases.10
Conflict of Interest:
The authors declare no conflict of interest

Schwannoma of the tongue in a ten-year old child

Leaking pseudoaneurysm of hepatic artery: a potentially life-threatening complication of a common procedure