Cigarette smoking is a major risk factor for atherosclerosis and cardiovascular disease. Active and passive cigarette smoke exposure predisposes to cardiovascular events. Pregnancy associated plasma protein-A is a metalloproteinase of the metzincin super family. It cleaves specific insulin like growth factor binding proteins thereby regulating local insulin like growth factor bioavailability which is a mediator of atherosclerosis. In this study we wanted to establish if Pregnancy associated plasma protein-A levels are increased in normal rats and if the Lipid profile was affected, if exposed to passive smoking.
Sixty albino rats of Sprague- Dawley strain were used, weighing 200-250 gm. Both the groups were kept in identical chambers. One group of 30 rats was further exposed to cigarette smoke. Blood triglycerides were determined by enzymatic colorimetric method. In this animal study it was seen that smoking had no effect on (triglycesides), cholesterol, LDL and HDL levels. Smoke exposure has no effect on pregnancy associated plasma protein-A (PAPP-A) levels.
Keywords: Cigarette smoke, PAPP-A, Active smoking, Passive smoking.

Cigarette smoke is divided into two phases: a tar phase and a gas phase. Tar phase of cigarette smoke contains >1017 free radicals/g, and the gas phase contains >1015 free radicals /puff. Mainstream cigarette smoke comprises 8% of tar and 92% of gaseous components. Side stream cigarette smoke contains a higher concentration of the toxic gaseous component than mainstream cigarette smoke.1 Pregnancy associated plasma protein-A (PAPP-A) is a metalloproteinase of the metzincin super family that cleaves specific insulin like growth factor binding proteins thereby regulating local insulin like growth factor bioavailability2 and is also a mediator of atherosclerosis.3 Peripheral blood levels of PAPP-A are now being proposed as a biological marker of acute coronary syndrome.4 In this study we wanted to establish if PAPP- levels were increased in smokers and whether the lipid profile was affected.

This study was conducted on sixty, 12 weeks old male albino rats of Sprague Dawley strain; weighing 200-250g. The levels of pregnancy associated plasma protein -A and lipid profile were measured before starting the experiment and at the end of the experiment, that is on the 28th day in both normal and normal rats exposed to smoke. Cigarette smoke exposure was given to them for six hours per day i.e. from 8 o\\\'clock in the morning to 2 o\\\'clock in the afternoon for six days a week. Filter tipped cigarettes were used (Gold Flake-Pakistan). Lit cigarette would be introduced into the plastic chamber. Transparent plastic chamber was built with separate inlets for smoke and fresh air, with two holes, each 3cm in diameter in two opposite walls to provide unforced exchange of fresh air and through these holes the head of burning cigarette was introduced to the chamber, by keeping it on the iron rod stand specially built for the purpose. Cigarette would be attached to the stand by means of scotch tape/paper tape. Each cigarette would approximately burn for 10- 12mins, and during this time the chamber would completely fill up with smoke. 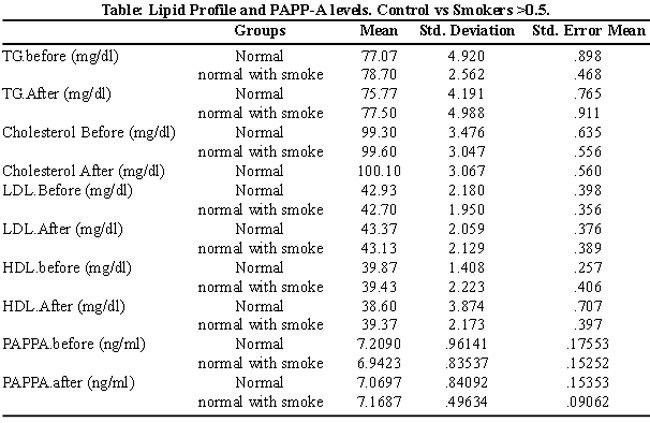 Group - I animals were taken as controls and Group - II animals were exposed to cigarette smoke in the smoking chamber custom built for the purpose. Lipid profile comparison of the two groups before the experiment and after the experiment showed no significant difference i.e. p > 0.05. Levels of PAPP-A of the two groups also showed no significant difference i.e. p > 0.05 at the two intervals.

Evidence supports the fact that atherosclerosis is an inflammatory process and inflammation plays a major role in the pathogenesis of acute coronary syndrome (ACS) and this theory has lead to the identification of many new biochemical markers that can be used in the diagnosis of ACS.5 Passive smoking may have adverse effects on lipid profile. In the study the values of fasting serum cholesterol and LDL in smokers were not significantly different from levels in nonsmokers. The actual mechanism of dyslipidaemia might depend upon the number of hours of exposure per day to smoke and the proximity to smokers.6 After conducting this study it could concluded that as the levels of PAPP-A are not increased in smokers, there is a possibility that the endothelial damage caused by smoke is not mediated by IGF-I and its mechanism of causing pathogenesis does not activate PAPP-A. The lipid profile when compared to the study conducted by Stulc et al demonstrates rise in the levels of PAPP- A in hypercholestrolaemic patients but those patients were smokers and hypertensive.7 On the other hand, a study conducted by Beaudeux et al and Sales et al, there was a lack of correlation between PAPP-A and hypercholesterolaemia.8,9 In another study conducted by Conover CA et al it was seen that cultured human coronary artery endothelial cells express PAPP-A mRNA and functional protein. When activated by the pro-inflammatory cytokines, the data indicate that regulation of PAPP-A expression by cytokines is cell-specific i.e. they stimulate either endothelial cells, smooth muscle cells or human bone cells.10

In this animal study it was seen that smoking has got: no effect on TG, cholesterol, LDL and HDL levels and smoke exposure has no effect on PAPP-A levels.