The first ever National Health Accounts for Pakistan have been published in May 2009 by FBS in collaboration with GTZ. The activities of NHA were started in January 2008 and it took 17 months to complete the first round, which is a very short period considering the experiences of other countries in the region. NHA estimate health expenditures by four dimensions namely financing sources, financing agents, health care providers and health care functions.
In the first round, two dimensions financing sources and financing agents were covered. Health expenditures by financing source give information on some important policy questions such as who pays, who finances under what scheme that can potentially help in devising financing strategies. Health expenditures by financing agents provide information on policy questions such as what is the overall financing structure, what are the pooling arrangements and what are the payment/purchasing arrangements which can give feedback to health policy decisions related to pooling arrangements and regulation of payers.
NHA also present the regional accounts i.e. the expenditures being allocated to the regions according to the location where the health care is provided. This includes health expenditures by federal government, provincial government, district government, cantonment boards, Employees Social Security Institutions, out-of-pocket expenditures (OOP)1 and the expenditures by donor organisations. Such regionalisation of expenditures is very important as they are not only potentially helpful at provincial level in taking health related policy decisions but also give a useful information for a national level analysis.
The scope of this paper is broadly to have analysis of the regional accounts, to have comparison of health expenditure figures of NHA with figures from other sources i.e. comparison of Punjab provincial and district government figures with that of ADB figures and may be to come up with reasons for differences if any. Lastly, the paper makes a comparison of district government health expenditures between districts (in each province) and then comparison of provincial and district government health expenditures between provinces. The comparison of provincial and district government expenditures also analyses their share to be used as a proxy to assess the degree of fiscal autonomy of districts in carrying out health related activities.
Our findings can be applied as recommendations for future rounds of NHA in Pakistan regarding formats and necessities of detailed health expenditure data collection to ensure evidence based decision making not only on federal, but also on provincial and district level. Nevertheless, NHA is a pure accounting framework in monetary terms, describing financial flows in health systems comprehensively, but not carrying out productivity analyses or quality assessments of health care.
Regarding data quality it is important to keep in mind when undertaking these analyses that Total Health Expenditures (THE) do include estimations due to a combination of public (PIFRA2) and private3 (household surveys) expenditure data. In contrast to that, the analyses in this article comparing district expenditures do not include estimations, since they are purely based on official PIFRA data, which are taken from AG and AGPR publications.
Provincial Health Accounts:
The NHA 2005-06 report also includes some results of the province wise breakdown of health expenditures. These Provincial Health Accounts are sub-accounts of the NHA and track expenditures on health for a specific regional section of the health system. According to the principle of regionalization expenditures are allocated to the regions according to the location where the health care has been provided; the residency of the patient is not a criterion.

For Balochistan hospital services as well are highest for all districts with a range between 60 to 98%. For health administration expenditure is highest in district Lakki with 35% compared to an average of all districts in Balochistan of 9%. In Balochistan the expenditure structure is different to other provinces, because most districts have given their highest expenditure for health administration (range from 0 to 100 with an average of 78%). The second highest expenditure is hospital services, which range from 0 to 100 with an average of 22%. Public health services are only given in one district Khuzdar with less than one percent. Expenditures for medical product appliances are zero in all districts of Balochistan.
Within each province most districts — besides a few exemptions — have a similar expenditure structure. For districts in Punjab, Sindh and NWFP the majority of expenditures are made for hospital services; only most districts in Balochistan report health administration to be their highest expenditure. This difference might occur due to different understanding of the requested disaggregation classifications by the regional AG and AGPR offices. This has to be clarified in the next data request by the two mentioned institutions.
Provincial/district governmental health expenditure — Inter province comparison and degree of fiscal autonomy:
In this section we describe the legal constitution of districts autonomy from the provinces; in this regard we then analyse the impacts on the distribution of health expenditure between districts and provinces.
The fiscal autonomy of the districts is fixed in the devolution of 2001, which deals with subsidiary and the vertical distribution of responsibilities between different governmental bodies. Decentralization can broadly be defined as the transfer of authority and power in public planning, management and decision making from higher to lower levels of government or from national to sub-national levels.6-8 Different processes and models exist within decentralization such as 1) de-concentration, 2) delegation, and 3) devolution.9
1) In deconcentration administrative responsibilities are transferred to locally based offices of a national government ministry and the deconcentrated units remain accountable to the central authority for what they use and the outputs produced.
2) In delegated forms of decentralisation, management responsibilities are transferred to semi-autonomous entities which are outside the regular bureaucratic structure. The aim is to free national government from day-to-day management functions. Again, the entity remains accountable to national government.
3) In a devolved form of decentralisation, political and administrative authority is transferred to an independent local-level statutory agency, for example a municipality or local council. Also, the local level is able to generate revenue due to its statutory status. In this form of decentralisation authority for organizing, providing and partly financing services is given to a local government body or similar agency ultimately responsible to the local population. They are rarely completely autonomous, but are bodies largely independent of the national government in their areas of responsibility as opposed to being subordinate units as in the case of de-concentration.
In 2001, Local Government Ordinance 2001 was passed in Pakistan to introduce devolution based on the realization that devolution would provide a mean for community participation and local self reliance and will also ensure the accountability of government officials to the population. The devolution of powers in public planning, management and decisions related to finances changed the fiscal structure and the recording of the fiscal data as well. Appropriation Accounts were maintained at the district level for expenditures incurred by districts while provincial Appropriation Accounts only included the expenditures at the provincial level. The process of devolution has to be progressive to shift from one system to another and to ensure the capacity building of the district management teams. For this reason, the four provinces were at different levels of devolution and this can be seen using the health expenditures by provinces and districts as a proxy indicator of level of devolution.
For the three provinces (Punjab, Sindh and Balochistan) the total public health expenditure incurred is about equally shared by provincial and district levels i.e. devolution of fiscal powers in health related activities (province shares are between 52 and 54%). Whereas, in the case of NWFP the provincial government spends 92% while districts spend only 8% of the total public health expenditures, which might possibly due to limited devolution of fiscal powers. 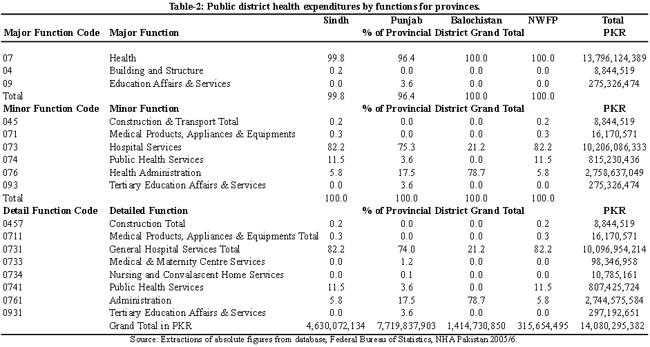