Objective: To find out the physical, social, psychological life aspects and overall quality of life among thalassaemic children in Pakistan.
Methods: This cross-sectional study was done in ten Thalassaemia treatment centres in three major cities of Pakistan during the year 2007-08. The study population comprised of 221 thalassaemic children ranging from 4 to 12 years age brought for blood transfusion by their parents. All ethical considerations were taken into account during the study. Questions related to physical, social and psychological aspects that assess quality of life (QOL) of children with thalassaemia were asked and were further analyzed using SPSS version 12.0.
Results: Out of total 221 thalassaemic patients surveyed, the majority (61%) were boys with a mean age of 8.5 ±2.26 years for both sexes. An overwhelming majority of parents (86%) felt that the disease did not affect the child\\\'s family or social relationships. However, poorer quality of life (QOL) was found against psychological aspects (p<0.05) and overall parent satisfaction for child\\\'s health (p<0.001). Adverse impact of thalassaemia was also found for pain (73%), sleep (50%), eating habits (49%), leisure activities (54%) and task concentration (51%) among the participants.
Conclusion: There was a substantial amount of concern raised by the parents for various aspects of QoL in their affected children. Hence, it is crucial to provide proper health education to parents for better understanding of the disease and rehabilitation of their thalassaemic children.
Keywords: Thallasaemia, Quality of life, Social relationship, Pakistan (JPMA 61:470; 2011).

Haemoglobin disorders are hereditary, genetic diseases which include mainly sickle cell disease and the thalassaemias. These account for a greater proportion of births affected, across the world.1 Despite the laboratory and clinical advancements towards their effective prevention and clinical management, 80% of the affected births and high rates of mortality and morbidity are still observed in the developing countries.2,3
Thalassaemia are hereditary blood disorders, due to defective haemoglobin production as a result of the defective synthesis of one or more globin chains, passed from parents to their children and is characterized by chronic anaemia.4 Several types of thalassaemia have been described and named according to the affected globin-chain, the most common types of clinical importance being a0, b‚and a thalassaemia.1,5
Worldwide, thalassaemia poses a serious public health problem due to the high prevalence extending from the Mediterranean basin and parts of Africa, throughout the Middle East, the Indian Sub-continent, South-East Asia, Melanesia  and into the Pacific Islands with reported rates ranging from 2% to 25%.1,6,7 Each year, 50,000 to 100,000 children die of thalassaemia major in low and middle income countries while about 7% of the world\\\'s population is a carrier of a haemoglobin disorder.3
In Pakistan, thalassaemia is seen in almost all parts of the country.8 Every year, 5000 babies are born with thalassaemia - five out of 100 persons are currently suffering with around 8 million population is a carrier.9 The average life expectancy in thalassaemia is about 10 years.8
As there is no definitive cure for this disease, the majority exclusively depend on blood transfusions as a treatment option that creates a burden not only on health system but also on the affected families, with children vulnerable to emotional, social, psychological and behavioural problems.10,11 Various Quality of Life (QOL) studies conducted worldwide on thalassaemia indicated poor indicators for the sufferers.12-15 However, literature review has revealed lack of studies that address quality of life among children with thalassaemia in Pakistan. The present study aimed to find out the physical and psychosocial life aspects and overall quality of life (QOL) among Pakistani thalassaemic children.

It was a multi-centred cross sectional study using non-probability convenient sampling technique. The study was carried out during May 2007 to March 2008 in three major cities of Pakistan. Two hundred and twenty one children suffering from thalassaemia between 4 to 12 years of age were chosen as the sample. All parents who brought their children for blood transfusions were approached during the study period from 9 am to 3 pm, three days a week excluding Saturdays, Sundays and public holidays. Only those parents who were willing to participate were included in the survey. A total of 270 patients were approached to participate in the survey, out of which 235 gave their verbal consent to respond to the study questionnaire. Fourteen incomplete questionnaires were rejected and were not included in the study; hence data from 221 participants were included.
Informed consent was taken from all concerned officials of all thalassaemia treatment facilities. Plain language statement (PLS) was used for the respondents and was also verbally explained about nature and objectives of the research. All the respondents and the authorities were given assurance for the confidentiality of the data.
Treatment facilities for thalassaemic patients present in blood banks or in tertiary care hospital were included for the survey. A total of 10 centres in Karachi, Lahore and Multan were identified for the study. In Karachi, the centres were located in the Civil Hospital, Hussaini Blood Bank and Burhani Blood Bank while participants in Lahore were taken from the Children Hospital, Sir Ganga Ram Hospital, Mayo Hospital, and Sundas Foundation. Fatimid Center was the only study site in Multan and other two cities previously mentioned.
Data was collected on a pre-tested questionnaire comprising 32 questions, designed to assess the quality of life under the following domains; physical health, psychosocial health, and daily routine issues. The questionnaire was developed keeping in view the psychometrically valid WHO Quality of Life-BREF questionnaire16-18 and Internet Mental Health Quality of Life Scale questionnaire.19 The main study questionnaire was initially developed in English language. The questions were then translated in simple understandable Urdu language and were administered to the participants. All demographic variables that included age, sex, address, educational status, family history, age of diagnosis of the disease, start of treatment and number of transfusions were included. Parents reported psychological distress in the form of somatization and various conduct problems in children of younger age group compared to older children who have an increasing insight into their illness and might account to cause depressing symptoms. Leisure activities were reported as watching television, playing games, reading books or magazines. Children who had other chronic illnesses with thalassaemia were excluded from the study.
Data was entered, stored and analyzed with the help of SPSS software, version 12.0. Frequencies were tabulated for demographic data as well as for psychosocial issues. Cross tabulation using Chi-square was done for psychological and level of satisfaction of parents for their child\\\'s health against overall quality of life. p < 0.05 was considered to be as statistical significant. 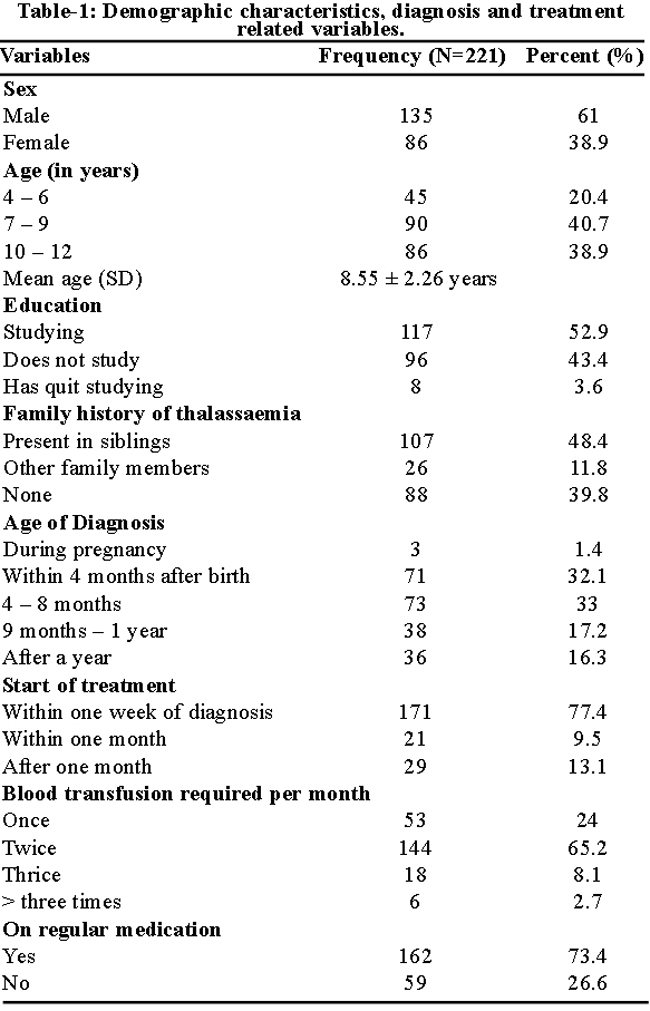 Table-2 lists responses given by parents for various aspects of well-being of their thalassaemic children. These included physical, psychological and social aspects of the child\\\'s health. According to the parents, pain and discomfort of moderate to severe intensity prevented 161 (73%) of the children to do daily intended routine work. Negative feelings such as despair, anxiety and depression were very often noticed among the majority 133 (60%) children. Similarly, 148 (67%) and 119 (54%) children did not or seldom had enough energy for everyday routine activities or participate in leisure activities respectively. Slightly more than half found it difficult to concentrate or focus on a particular task and to enjoy events in routine daily life.
The majority of the parents reported dissatisfaction with the personal hygiene (53%), sleeping pattern (50%) and eating habits (49%) of their children. Half of the parents showed dissatisfaction for the overall health status of their children. However, a larger proportion of the parents (72%) and (70%) were satisfied with the provision of health services available and the support of friends and family respectively for their children (Table-2). The overall quality of life was found to be highly significant when cross-tabulated with psychological feelings (p<0.05) and parents satisfaction for child\\\'s health (p<0.001) (Table-3). 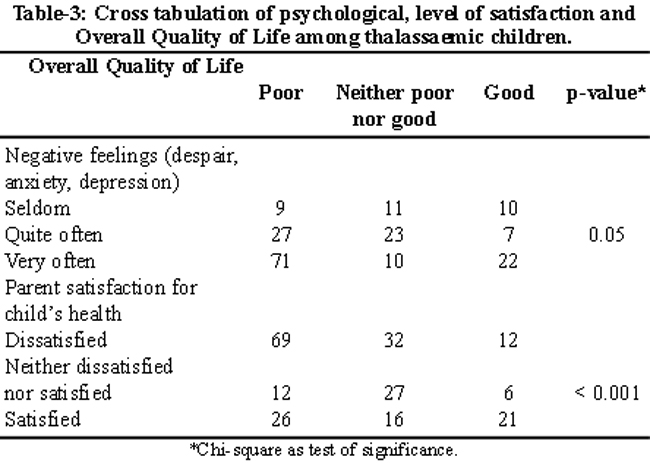 Life threatening illnesses like thalassaemia create a substantial impact on a child\\\'s life and the family system, in general. It affects not only the child\\\'s normal activities but also demands a challenging task for the parents. In our study the proportion of males coming for treatment was comparatively higher than their counterparts (135 males versus 86 females). Studies conducted in India also found higher percentage of male than female patients.11,20,21 This can be explained by the similar socio cultural setup and gender bias that prevails in South Asian regions where parents are possibly more inclined to seek medical treatment and to spend more on their male children.11
A higher frequency of thalassaemic children (65%) was observed who required blood transfusions twice monthly in our study. This can be compared to an Indian study where 33% and 93% patients in a private and government setting respectively needed blood transfusion more than once a month (p<0.05). This significant difference in number of patients in private setup could be due to availability of better follow-up facilities and counselling services than the government hospital.11 Although our study was undertaken in both private and public sector settings, these differences were not taken into account in our study and were found to be one of the weaknesses of the study.
In the present study, support by friends and family members has been a key factor in maintaining a good relationship among thalassaemic children. Similar results were reported in India where the disease had little or no impact on family relationships.22 Contrary to this, Ratip and Modell23 reported lack of communication and withdrawal behaviour of thalassaemic children from their families. Another Italian study reported thlassaemics having a few friends in the peer age group.24 One of the reasons for effective family support is that families living in south east Asian countries are more culturally and religiously knitted together than in European countries.
An overwhelming majority reported in the present study, feelings of despair, anxiety and depression of moderate to severe intensity. A fear of chronic diseases like thalassaemias that do not have a definite cure can be one of the important factors leading to these psychological reactions. Illness-induced anxieties and depression among these patients had been well-documented in many studies.7,10,15,22 Our study further indicated that those with psychiatric problems had poorer quality of life (p<0.05). A recently published study highlighted the significant negative impact of thalassaemia on psychosocial functioning among Thai children.25 More psychological support should be provided to thalassaemia patients while in-depth studies involving both children and parents in Pakistan would establish correlations between individual psychological outcomes and quality of life (QOL).
One of the limitations of this study was the lack of comparison with healthy controls. It would help in more convincing assessment of psychosocial aspects and indentifying confounding factors for various socio-demographic variables.

The present study concluded that there is a substantial parental concern for different physical, social, psychological life aspects of thalassaemic children. The study also reported a significantly poor quality of life (QOL) of these children.
It is therefore, highly recommended to involve health care professionals to provide health education of the disease for their parents and support for best possible treatment for children. Furthermore, policy makers and stakeholders should provide social and monetary support for family members that in turn comprehensively improve the disease burden and the quality of life (QOL) in thalassaemic children.

We would also like to acknowledge with utmost thanks to the parents of thalassaemic children who willingly helped and cooperated with us to carry out this study.