Objective: To study the clinical presentation, thyroid function tests, ultrasound (US) features, cytology and surgical pathology results of patients undergoing fine needle aspiration (FNA) biopsy of thyroid nodules and to determine if a significant difference exists in the above variables between small (less than 1 cm) and large ( 1cm or more) thyroid nodules.
Methods: The study is a retrospective chart review study involving patients undergoing FNA of thyroid nodules at Marshall University Endocrine Clinic. Study data on patient demographics, clinical presentation, physical examination findings, thyroid function tests, US features, cytology and surgical pathology were collected and analyzed.
Results: A total of 122 patients were included in the study including 18 patients with small and 104 patients with large thyroid nodules. Females were 88%. The overall mean age of patients was 56 ± 15 years. Most of the patients (63%) were asymptomatic on presentation. Only 20% patients had their nodules reported to be palpable on physical examination. Solitary nodules as well as the dominant nodule in multi-nodular goiters in both groups were more frequently localized to the right lobe of thyroid gland. The mean US size was 0.7 ± 0.15 cm for small and 2.4 ± 1.2 cm for large nodules. Patients with small nodules presented at an earlier age (45 ± 14 years Vs 58 ± 15, years p=0.008) and were more likely to have family history of thyroid cancer (p= 0.023), as compared to patients with large nodules. However, there was no other significant difference identified in clinical presentation, cytology results and prevalence rate of thyroid cancer between patients with small and large thyroid nodules.
Conclusion: In this study patients with small thyroid nodules presented at an earlier age and were more likely to have family history of thyroid cancer as compared to those with large nodules. There were no other significant differences in other study variables between small and large thyroid nodules. Further studies with large sample size in each group are needed to verify our results.
Keywords: Small throid nodules, Ultrasound features, Cytology, FNA, Solitary nodules (JPMA 61:466; 2011).

This was a retrospective chart review study which was approved by the Marshall University Institutional Review Board. Patients seen at the Marshall University Endocrine Clinic from 2000 to 2007 who subsequently underwent fine needle aspiration biopsy (FNA) were included in the study. Patients with no documentation of the clinical examination, thyroid function tests, thyroid ultrasound, FNA or surgical pathology reports in their medical records were excluded from the study.
Data sources included Endocrine Clinic consultation and follow up notes from patient charts, thyroid function tests, thyroid US, FNA cytology and surgical pathology reports.
Patients were classified into the following 3 groups based on their presentation:
1. Symptomatic patients — These patients presented with thyroid related symptoms - Symptoms of hypothyroidism, hyperthyroidism, and compression symptoms such as difficulty of swallowing or shortness of breath. Presence of nodules was confirmed by thyroid US.
2. Asymptomatic patients — These patients presented to their primary care physician or to the endocrinology clinic with non-thyroid related symptoms or non-thyroid related diagnosis and were found to have thyroid nodule either on physical examination or subsequently ordered thyroid ultrasound.
3. Patients with incidentally discovered thyroid nodules — These patients were found to have thyroid nodules incidentally on imaging done for non thyroid pathology such as CT of the chest, CT/MRI of the head and neck, PET scans and US of the carotid arteries.
Patients were categorized into 4 groups based on physical examination of thyroid gland: barely palpable thyroid gland, normal sized thyroid gland with no palpable nodules, enlarged thyroid gland with no discrete palpable nodules, and easily palpable single or multiple nodules.
Data on thyroid function tests and US characteristics of the nodules were collected at presentation of the patients to the endocrinology clinic. The US interpretations were done by various radiologists.
FNA cytology results were categorized into five groups, which included:
Colloid cytology, adenomatous nodule cytology, suspicious cytology- Includes follicular neoplasm and atypical cytology, non-diagnostic cytology and malignant cytology.
To test the study hypothesis patients were categorized into two groups based on the largest diameter of the dominant nodule on Ultrasound examination. Large nodules were defined as nodules measuring 1cm or more and small nodules as those measuring less than 1 cm in their largest diameter on thyroid US.
All the data collected on the above variables were coded and systematically fed into EXCEL database. The data analyses were done on STATA statistical software. Descriptive statistics measures such as percentages and means were calculated for continuous variables. To test the study hypothesis, comparison of small and large nodules was done with Pearson\\\'s chi-square and Fisher\\\'s exact test for categorical variables and student\\\'s t-test for continuous variables. The level for significance was set at a p value of < 0.05.

A total of 122 patients were included in the study. Females patients were 107 (88%), of which 37% presented with thyroid related symptoms. Asymptomatic patients were 77 (63%) on presentation out of which 20% had their nodules diagnosed incidentally on imaging studies done for non-thyroid related diagnoses. Patients with barely palpable thyroid were 18 (15%), normal sized thyroid 41 (34%) and 38 (31%) had enlarged thyroid glands with no discrete nodules palpable on examination. Only 16 (20%) patients had their nodules reported to be palpable on physical examination.TSH results were available for 116 patients, 26 (22 %) had suppressed TSH, 84 (72 %) had normal TSH and 6 (5%) had above normal TSH at the time of evaluation. 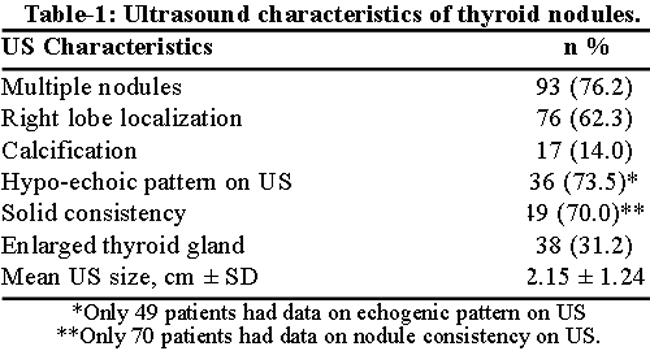 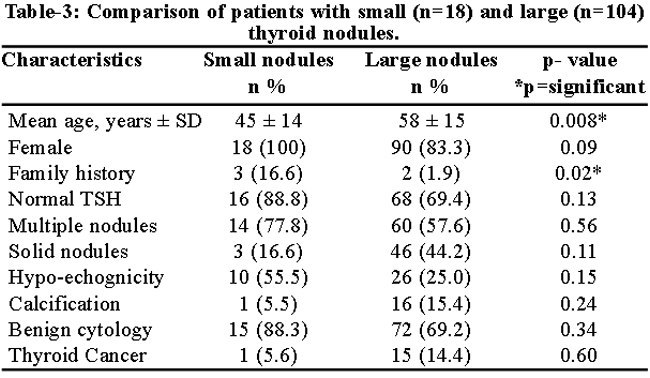 Recent epidemiological studies have reported an increase in the number of patients diagnosed with thyroid nodules. This simply may indicate increased awareness of patients and their health care providers regarding possibility of underlying malignancy of the thyroid or else it may point towards an increased incidence of thyroid nodules. Conversely this might result from increased detection of asymptomatic thyroid nodules incidentally on ultrasound examinations (US) or CT scans/MRI\\\'s done for non-thyroid related pathologies.2
In this study, thyroid nodules were more common in women as compared to men and this finding is consistent with previously published studies from United States5 and Pakistan.6 Patients with small nodules presented at an early age compared to patients with large nodules for both sexes and for both solitary and multiple nodules. The young age at presentation for patients with small nodules can be explained by the natural history of most thyroid nodules that grow progressively over time.7
In this study, the risk factors for thyroid cancer such as radiation exposure and family history of thyroid cancer were very low with a rate of less than 1% and 4% respectively. Interestingly, there was significantly higher family history of thyroid cancer in patients with small thyroid nodules. This finding may be due to a possible inclusion bias related to an indication to biopsy those small nodules with a positive family history of thyroid cancer.
This study showed a high frequency of clinically in- apparent thyroid nodules. Overall, 63% of the patients presented either with no thyroid related symptoms or were detected incidentally on imaging done for non thyroid pathologies. Only 20% of patients had their thyroid nodules reported to be clinically palpable and almost half of the nodules were present in either normal or barely palpable thyroid glands. This finding indicates poor sensitivity of thyroid physical examination in detection of thyroid nodules as compared to thyroid ultrasound imaging which is consistent with previously published studies.8 Akhtar et al studied the correlation of clinical presentation with investigations and operative findings in their patients with thyroid nodules and concluded that clinical examination failed to differentiate solitary from dominant nodule in 26% of cases.9 Of particular interest was the finding that physical examination findings were not different in patients with small thyroid nodules as compared to those with large thyroid nodules, although there was a significant difference in nodule size on ultrasound imaging. With growing reliance on thyroid ultrasound imaging, physicians tend to be spending less time on thyroid palpation as well as the documentation of their physical examination findings. Since this study was a retrospective chart review, it is possible that physicians might have failed to document their physical examination findings appropriately in the medical records.
This study showed predominant localization (62%) of both solitary nodules and the dominant nodule in patients with multiple nodules to the right lobe of the thyroid gland. The right lobe of thyroid gland is normally larger and more vascular of the two lobes and this anatomical difference could account in part for our finding.10
In this study there was no significant difference between small and large nodules in terms of prevalence of thyroid cancer (5.6 % vs. 14.4 %, p= 0.6). Previous studies have shown inconsistent results relating the size of thyroid nodules to risk of thyroid cancer.11,12 Cappelli et al showed that although the prevalence of thyroid cancer was slightly higher in nodules 1cm or more in diameter compared to those less than 1cm (5.5% vs. 3.0%, p<0.01) but the local aggressiveness and histological type of thyroid cancer was independent of nodule size. The authors concluded that the decision to biopsy a thyroid nodule should not be based upon the nodule size alone. Study population included high risk patients referred for US guided FNA of thyroid nodules.11 The study by Kim et al showed that cut off value of 1 cm in the longest diameter of thyroid nodules was not a significant predictor for thyroid malignancy (p=0.184). Their study included a population of low risk patients self- referred for ultrasound evaluation of thyroid gland.4
Limitations of the study were that it was a retrospective chart review. Other limitations included variation between physicians in documentation of patients\\\' clinical presentations and thyroid physical examination findings, incomplete record of some study variables like TSH and FT4 levels, inter and intra-observer variability in radiologists reading the thyroid US images, incomplete documentation of some US characteristics of nodules and analysis of only the largest and dominant nodule in patients with multiple nodules. Another important limitation of the study was the small sample size of patients with small nodules who underwent FNA biopsy and surgical management. Hence, further studies with large sample size in each group are needed to verify the results of this study.

In this study, patients with small thyroid nodules presented at an earlier age and were more likely to have family history of thyroid cancer as compared to those with large nodules. There were no other significant differences in other study variables between small and large thyroid nodules.