In Vitro Susceptibility of typhoidal Salmonellae against newer antimicrobial agents: A search for alternate treatment options

Objectives: To determine the minimum inhibitory concentrations (MICs) of ceftriaxone, azithromycin, pefloxacin, cefipime and imipenem for Salmonella Typhi (S. Typhi) and Paratyphi.
Methods: One hundred and fifty four isolates of Salmonella Typhi and S. Paratyphi A, B and C growing in blood culture were selected. MICs of ceftriaxone, azithromycin, pefloxacin, cefipime and imipenem were performed by agar dilution method as recommended by clinical laboratory standard institutes.
Results: MIC90 of azithromycin and pefloxacin was 8 µg/ ml, cefipime was 0.06 µg/ ml and imipenem was 0.5µg/ml. None of the strains were found to be resistant to ceftriaxone but 3 isolates showed higher MIC value of 2µg/ml.
Conclusion: Azithromycin appears a suitable alternate for the treatment of typhoid in the community. Imipenem and cefipime are good options in complicated cases to be treated in hospital settings. Pefloxacin cannot be used as MICs are higher. Presence of isolates with higher MIC of ceftriaxone is serious and stresses upon continuous laboratory surveillance to guide clinicians appropriately.
Keywords: Drug resistance, typhoidal Salmonellae, new options (JPMA 61:462; 2011).

Enteric fever is a global health problem responsible for 21million cases and 21,000 deaths annually. Of these 80% of cases occur in Asia alone.1 Pakistan is a high burden country with an annual incidence of 413 /100,000 person / year.1 Even in 21st century many challenges limit its effective management. One of the major issues is emergence of drug resistant strains.
Initially chloramphenicol was successfully used to treat this infection but in 1980s emergence of resistance limited its use.2This was followed by emergence of multidrug resistant (MDR) strains2 (combined resistance to chloramphenicol, ampicillin and co-trimoxazole) initially reported from India, Pakistan and Middle East and then from all over the world. Emergence of this resistance results in loss of these cost effective drugs making fluoroquinolones the drug of choice.2,3 However widespread use of fluoroquinolones led to emergence of Salmonella Enterica serovar Typhi and Paratyphi strains with reduced susceptibility to fluoroquinolones.3,4
Currently third generation cephalosporins are the mainstay to treat enteric fever. However, isolation of S. Typhi resistant to ceftriaxone from Bangladesh5 and reports of clinical strains with higher minimum inhibitory concentration (MIC) from India is alarming7,6 and leave very limited therapeutic options to treat this infection.
This emerging resistance in ceftriaxone makes this situation worse and enforces scientist to seek out newer options for treatment of typhoid fever. Recently clinical and laboratory based studies have reported good activity of azithromycin8,9 imipenem10 and pefloxacin11,12 against enteric fever isolates, building these drugs as satisfactory alternatives to conventional drugs. Additionally, cefipime,13 a fourth generation cephalosporin is reported to have improved coverage for resistant gram negative pathogen; however its role in enteric fever needs to be evaluated. Therefore, this study was conducted to explore the future use of azithromycin, pefloxacin, imipenem and cefipime by determining their MICs against enteric fever isolates. MICs of ceftriaxone and susceptibility patterns of conventional drug were also assessed for all isolates of S. Typhi and S. Paratyphi A, B and C included in the study.

This study was conducted at the clinical microbiology laboratory of the Aga Khan University (AKUH), Karachi Pakistan. AKUH is a tertiary care centre and its microbiology laboratory receives blood culture both from admitted patients and outpatients collected through 189collection points located all over the country.
One hundred and fifty four (154) clinical strains of S. Typhi and S. Paratyphi A, B and C isolated from blood culture between March 2007 and August 2007 were included in this study.
Blood cultures received in the laboratory were incubated in BACTEC 9240 system. Positive blood culture bottles were sub cultured on suitable medium according to gram stain findings. Non-lactose fermenting colonies growing on MacConkey agar were identified by standard biochemical and serological tests.14
Antimicrobial susceptibility testing (AST) against ampicillin (AMP) 10µg (Oxoid), co-trimoxazole (SXT) 25 µg, chloramphenicol (C) 30µg, nalidixic acid (NA) 30µg, ofloxacin (OFX) 5µg and ceftriaxone (CRO) 30µg were performed by CLSI (Clinical Laboratory Standard Institute) recommended Kirby-Bauer disk diffusion method.15 Breakpoints of zone sizes were taken from CLSI. For interpretation of fluoroquinolones, strains which are sensitive to nalidixic acid were considered sensitive to fluoroquinolones and for strains which were resistant to nalidixic acid; MIC of ofloxacin was determined by agar dilution method as recommended by CLSI guideline.15 Isolates having MIC > 4µg/ml and > 2 µg/ml were considered resistant and intermediate respectively and those having MIC < 0.125µg/ml were taken as sensitive. Isolates were considered to have reduced susceptibility to fluoroquinolones if MIC was in the range of 0.25µg/ml to1µg/ml.16
MICs of ceftriaxone, azithromycin, pefloxacin cefipime, and imipenem were performed by agar dilution method. To perform MIC\\\'s antibiotic powders (Sigma Aldrich) were reconstituted with CLSI recommended diluents to yield stock solutions.15 Stock solution once made was kept frozen. Antibiotic dilutions were prepared according to break points used and at least four fold dilutions below the sensitive point and four fold above the resistant point were made. MIC was determined by inoculating the organisms on Mueller Hinton agar with antibiotics in two fold serial dilutions and the lowest concentration of drug which completely inhibited the bacterial growth was recorded as MIC for that isolate. The drug dilutions at which 50% and 90% of tested isolates got inhibited were recorded as MIC50 & MIC90 respectively as per standard methods.17 Escherichia coli ATCC 25922 and Staphylococcus aureus ATCC 29213 were included in each experiment to ensure quality control. MIC breakpoints for ceftriaxone, cefipime and imipenem were taken from CLSI.
Human subjects were not involved directly in this study, or no intervention was done therefore formal ethical review was not required.
The data was entered into SPSS (Statistical Package for Social Sciences) version 16 software for statistical analysis. For descriptive analysis mean and standard deviation of continuous variable such as age were reported. For categorical variable like gender and antibiotic resistance, frequencies and percentage were calculated. 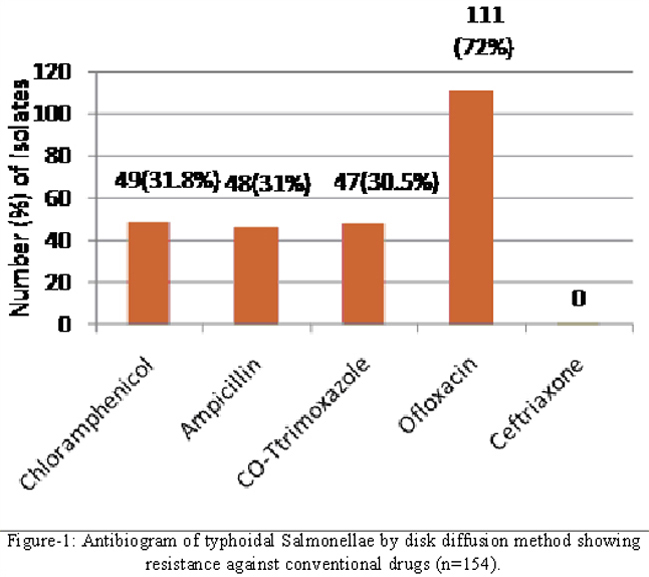 Among 111 nalidixic acid resistant strains, 18 were resistant, 28 were intermediate, and 65 had reduced susceptibility to ofloxacin. 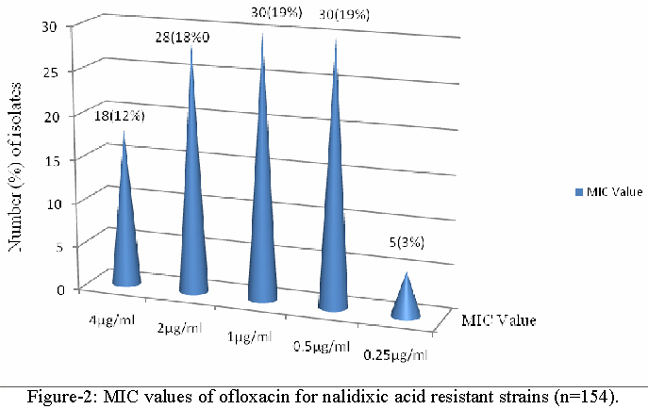 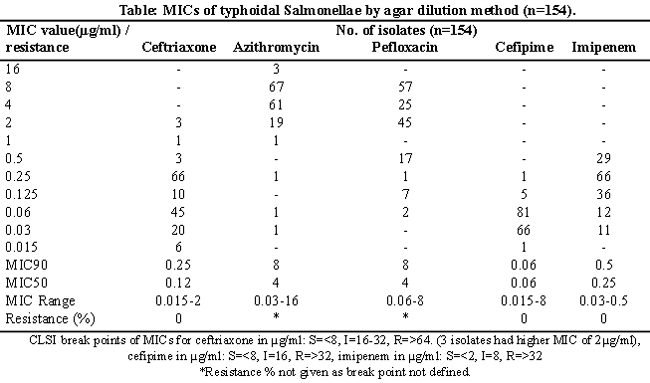 Table summarizes the MIC ranges obtained, MIC50, MIC90 of ceftriaxone, azithromycin, pefloxacin, cefipime, and imipenem. None of the strains were found to be resistant to ceftriaxone but 3 isolates showed higher MIC value of 2µg/ml.

In this study we evaluated role of newer antimicrobial agents, already identified to treat resistant cases of typhoid fever but never been explored in this part of the world. Azithromycin has been proposed as a promising agent for the treatment of enteric fever as it is highly effective against intracellular Salmonellae, defervescence is rapid, gastrointestinal carriage is eradicated, available in oral form and can be safely used in paediatric population in the community.18 MIC90 of azithromycin in our study is 8µg/ml. Most of the studies have reported MICs of azithromycin in the range of 4-16 µg/ml8,9 and MIC90 of 8µg/ml which is in concordance with our finding. Studies have also shown that azithromycin even at MIC of 8µg/ml is effective as it achieves high intracellular concentration and causes no relapses or major side effects.9 So far there is no recommendation for the break points of azithromycin in CLSI for typhoidal Salmonellae which is highly desirable and should be evaluated on the basis of large clinical trials to include such useful drug in treatment plans for enteric fever.
Pefloxacin is an analog of norfloxacin. It has extended gram negative coverage and has been reported to have higher cure rate in shorter duration in enteric fever treatment.12 Breakpoints are not yet defined by CLSI. Unal et al in 1996 reported MIC90 of pefloxacin as low as 0.05µg/ml with a range of (0.06-1µg/ml),12 MIC90 of pefloxacin in our study is 8µg/ml which indicates rising MIC\\\'s and possibly development of resistance in Salmonellae against this drug along with other quinolones. The fact which led this drug no longer a treatment option for typhoid fever.
Imipenem and cefipime showed promising results with low MIC90. However, their role in enteric fever treatment needs to be evaluated by clinical trials. Major limitations of both drugs are high cost and non-availability in oral forms. Furthermore these drugs are very broad spectrum and are potent extended spectrum beta lactamase inducers, use of these drugs in community will select out resistant microorganism. However their susceptibility against S. Typhi is important to know as both agents can be used in complicated typhoid cases and in mixed intraabdominal infection with Salmonella spp and other gram negative rods like in cases of intestinal perforation.
None of the strains were found resistant to ceftriaxone in this study; however three strains with comparatively higher MICs (2µg/ml) of ceftriaxone were detected. Previously resistant cases have been reported from Bangladesh and India. Capoor et al had compared MIC90of third generation cephalosporin for isolates of 2001 and 2006.6 They reported MIC90of of 178 strains isolated in 2001 equal to 0.06µg/ml which risen up to 0.25 µg/ml in 2005 which is in consistent with MIC90 of our study. Saha et al also reported a case with very high MIC of ceftriaxone 256 µg/ml.5 These reports from neighboring countries posing a serious threat. Therefore, there is a dire need to establish national and regional surveillance centers to monitor the trend and to develop strategies to control the emergence of drug resistance and their further spread. These findings make ceftriaxone\\\'s resistance monitoring and search of alternative drugs an essential element to control typhoid fever.
Due to irrational use of antibiotics, emergence of drug resistance is an issue in most of the developing countries including Pakistan. Resistance in S. Typhi and S. Paratyphi A to first line drugs and to fluoroquinolones was first reported from this part of the world and is still prevailing in this region. According to previous published report from our institute,19 none of the S. Typhi isolate had ofloxacin MIC > 4µg/ml in 2001, while in the current study this has risen upto 12%. The reason for this escalation in MIC could be multifactorial including its overuse in community, over the counter sale of antibiotics, their easy availability in oral form and comparatively low cost.
Another interesting and encouraging finding of this study was decreasing trend of MDR strains. Incidence of MDR strains was reported up to 70% from Pakistan in 1990s.20 In the current study MDR strains were 47(30.5%) of the total isolates, this declining trend is noted in other studies in Pakistan21,22 as well as in other parts of world.23,24 This re emergence may be because of new susceptible strains or because of loss of resistant plasmid. This finding invites future studies to determine molecular basis behind this phenomenon.
In conclusion, high prevalence of enteric fever in Pakistan and consistent emergence of drug resistance, stresses upon the implementation of preventive measures, improvement in hygienic conditions, ongoing surveillance and legislations for judicious use of antibiotics. This study calls for additional researches to determine dosage, clinical efficacy of the tested antibiotics.

The authors would like to thank all the staff of Clinical Microbiology Laboratory of Aga Khan University, Karachi, Pakistan for providing assistance for this study. This study was not funded.