Global spread of Neisseria gonorrhoeae represents a major concern due to extremely limited treatment options.1 This increase has been associated with either unregulated use of fluoroquinolones leading to selective pressure or due to importation of cases from areas with high incidence of quinolone resistance.2 Continuous monitoring of resistance pattern is crucial for appropriate management of cases as resistance could vary in different regions and over different time periods.3 In a community, resistance to a particular drug is usually driven by prevalent strain types and thus characterization of these isolates is required to identify their routes of dissemination and application of possible preventive and treatment strategies.4 Published data has shown a strong correlation between fluoroquinolone resistance and certain N. gonorrhoeae serovars suggesting accumulation and propagation of these strains in their settings.2,5
Actual burden of gonococcal infections in Pakistan is not known, however these infections are common, especially in high risk populations, leading to a high cost of treatment of both primary and complicated cases.6,7 High resistance rates to fluoroquinolone have been previously reported from the country in 2005 and 2007.3,8 Given the scale of public health importance of gonorrhea, with the widespread use of fluoroquinolone as an empirical agent, surveillance for drug resistance is crucial at the local level. Previous data of prevalent serovars of N. gonorrhoeae is currently lacking from Pakistan, hence information regarding strains prevalent in the community and their association with resistance would essentially be required to target disease prevention.
In this study we determined serovar distribution of gonococcal isolates (2007-2009) by employing co-agglutination technique. Furthermore an association was determined between fluoroquinolone resistance and strain types.

This study was conducted in the clinical microbiology laboratory of a tertiary care hospital in Karachi, Pakistan. The laboratory has a well established national specimen collection network and it receives specimens collected through the peripheral units, located in major cities and towns across the country. Specimens were requested by physicians and were then submitted at collection units. They were transported in a controlled environment to main laboratory within 24 hours. The laboratory data presented in this study, though not collected through a programmed survey, is representative of the country.
Collection of isolates: N. gonorrhoeae strains isolated between the years 2007 and 2009 were included in the study.
Laboratory methods: During the study period, N. gonorrhoeae was isolated and identified using standard microbiological procedure.9 All isolates were then saved in glycerol phosphate broth and stored at -80°C.
Antimicrobial susceptibility testing:
Antimicrobial susceptibility testing was performed using the disk diffusion method according to Clinical Laboratory Standards Institute (CLSI).10 Minimum inhibitory concentration (MIC) of ofloxacin was determined for all isolates via the E-test method as specified by the manufacturer (AB biodisk, Sweden). N. gonorrhoeae ATCC 49226 was used as control for disc diffusion and MIC testing.
Serotyping:
Selected isolates were revived from the strain bank and were serotyped using the co-agglutination technique.11 Serotyping was performed using the Phadebact GC serovar kit (Boule Diagnostic AB, Sweden) which consisted of five reagents for WI serogroup (Ao, Ar, As, At and Av) and nine reagents for WII/WIII serogroup (Bo, Bp, Br, Bs, Bt, Bu, Bv, Bx, and By). All serovars were classified into serogroups WI and WII/WIII and further sub divided into serovars.
Epidemiological data for gonococcal isolates was entered into computer software Epidata; and transferred to SPSS software for statistical analysis. In descriptive percentage of the categorical variables (antibiotic resistance) was computed. In inferential analysis chi square was run to assess the correlation between the strain type and fluoroquinolone resistance pattern.

During the study period a total of 314 N. gonorrhoeae were isolated. Of these 112 strains were randomly selected and serotyped. Fluoroquinolone resistance was seen in 98% of these isolates.
The distribution of isolates according to their susceptibilities to ofloxacin is depicted in Figure. 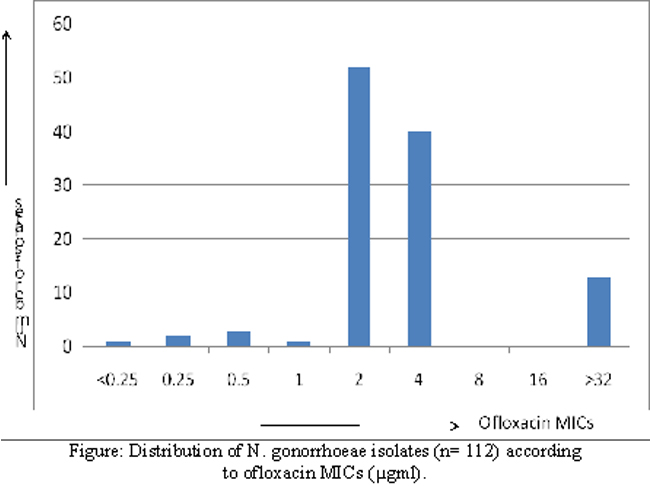 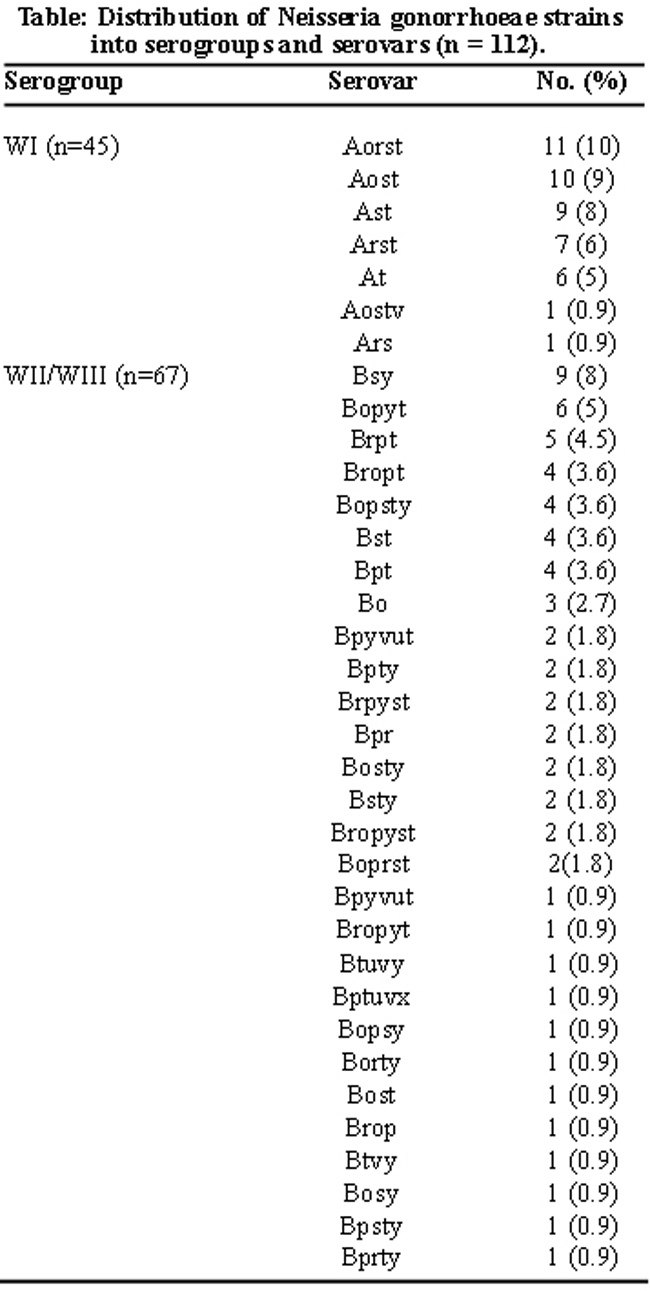 In inferential analysis, no significant association was observed between strain types and fluoroquinolone resistance (p = 0.481).

The results of this study demonstrated a wide variety of serovar distribution and very high fluoroquinolone resistance rate amongst N. gonorrhoeae isolated from Pakistan.
Most of the local strains (60%) belonged to WII/WIII serogroup, which is consistent with data reported from India, Turkey and Singapore.12-14 Seven serovars were grouped as WI whereas twenty eight serovars belonging to the serogroup WII/III were identified. The most prevalent serovar overall was Aorst (10%), followed by Aost (9%) and then Ast (8%) and Bsy (8%). Data from India also demonstrated similar predominant serovars Aost and Aorst in WI serogroup. In contrast common serovars from WII/WIII serogroup were Boprt and Btuvy in their study.13 Similar studies reported Bropyst and Bpyvut from Greece and Bsty from Turkey as their common serovars.13,14
Our results clearly show diversity in circulating N. gonorrhoeae strains and no single predominant serovar was identified in these strains. Karachi, the origin of most of the specimens, is a cosmopolitan city with a multi ethnic background and so, importation of strains from areas both within and outside the country might be the reason for this finding.
This study also highlighted a dramatic increase in fluoroquinolone resistance from 42% to 98% in the last seven years. This reflects consistent overuse of this drug despite the presence of fluoroquinolone resistance in the community. In Pakistan, antibiotics are available as over the counter medications and fluoroquinolones are commonly used as a treatment option in gonococcal and other infections due to its comparatively low cost and oral administration.
In this study no significant association was found between fluoroquinolone resistance and strain types. In contrast, a recent study from Greece has shown a significant association between the serovar Bropyst and fluoroquinolone resistance.13 They had correlated this finding to clonal selection and spread of these resistant strains as the cause of increased prevalence of fluoroquinolone resistance. Unfortunately, we were not able to show this association probably due to prevalence of multiple serovars or may be due to the low number of isolates in individual serovars.
The major limitation of this study was its small sample size. This could be the factor responsible for poor correlation between strain typing and drug resistance as very low number of isolates were found in individual serovars. Secondly, since we do not have any prior serotyping data of N. gonorrhoeae from Pakistan, we were not able to assess any change in their pattern along with the marked increase in resistance pattern to fluoroquinolones. Thirdly the method used for strain typing was not adequate for the accurate analysis of N. gonorrhoeae isolates; however in a resource limited country analysis of serovars using conventional methods could be used as an early tool to identify any change or shift in a clinical laboratory.
In conclusion we identified a diverse population of N. gonorrhoeae serovars in local isolates suggesting influx of a variety of gonococcal strains. High resistance to fluoroquinolones was observed but we had not been able to link this with any particular serovar. We relate high resistance to inappropriate and indiscriminate use of this drug in the community mandating implementation of antibiotic restriction policies and judicious use by physicians. Knowledge of currently existing serovars to identify clonal spread of resistance strains and continuous monitoring of serovars will be required, as temporal changes may demonstrate genetic alterations of existing strains and the importation of strains from different geographical regions. This information could then be utilized to design effective disease control measures and to curtail increase in antimicrobial resistance.
Funding:
The authors would like to thank the University Research Council grant office of the Aga Khan University, Karachi, Pakistan for providing the funding for this study.

We are thankful to all technical staff of Clinical Microbiology Laboratory of Aga Khan University Hospital, for their tremendous support provided for this study.
Conflicts of interest:
None.