Objective: To determine the BMD in premenopausal women with type-2 diabetes mellitus.
Methods: This case-control study was performed on 60 premenopausal women with type-2 diabetes mellitus and 60 normal premenopausal subjects. The groups were not completely matched regarding BMI; but they were in the range of obesity. Bone mineral density was determined using dual energy X-ray absorptiometry (DXA) to define bone mineral density (BMD) in second to fourth lumbar vertebrae and the neck of the femur (g/cm2).
Results: The results showed that BMD, T- and Z-score of femoral neck, total femur, L2, and Ward\\\'s were not significantly different between type 2 diabetic and normal premenopausal women (p>0.5). A significant increase of L3 BMD and L2-L4 Z-score was observed in diabetic group (p<0.05). In addition BMD, T- and Z-score of L4 were significantly higher in type 2 diabetic women than normal premenopausal women (P<0.05).
Conclusion: Higher BMD was noted over the spine in diabetic group which may be due to higher BMI in this group.
Keywords: Bone mineral density, Diabetes mellitus (JPMA 61:443; 2011). 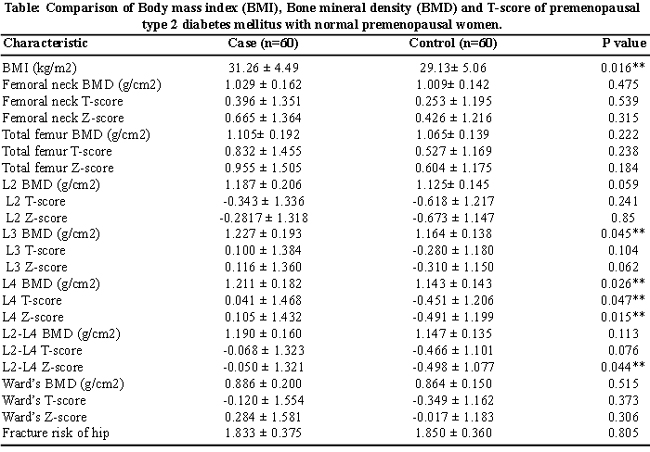 In this study we determined BMDs of the femoral neck, lumbar spine (L2-L4) and Ward\\\'s of premenopausal women with type 2 diabetes mellitus and premenopausal healthy women.
BMD, T- and Z-score of femoral neck, total femur, L2, and Ward\\\'s were not significantly different among type-2 diabetes and normal premenopausal women.
The results of the present study showed that the BMI of diabetic group was significantly higher than the control group. A meta-analysis showed that BMI is a major predictor of BMD in both the spine and hip in diabetes. Hip fracture risk is increased in both type 1 and type 2 diabetes, whereas BMD is increased in type 2 and decreased in type 1.15 The findings regarding the influence of type 2 diabetes on bone mass density does not appear consistent. 6,8,16-18
Anaforoglu et al investigated BMD in postmenopausal women with type 2 diabetes and compared it with postmenopausal nondiabetic women. They found that the groups did not differ on BMDs and T scores at the hip, lumbar spine, and radius.8 Hamilton et al found that BMD, T- and Z-scores at the hip, femoral neck and spine were lower compared with control subjects in males with type 1 diabetes, while female type 1 patients and control subjects had similar BMDs and T- and Z-scores at all sites.19
Women with type 2 diabetes mellitus have an increased risk of hip fractures despite having normal to high BMD.20 In agreement with our results Gupta et al21 reported that premenopausal Arab women with type 2 diabetes have a higher BMD at the spine than women without diabetes. They matched control and diabetic groups concerning the BMI. Although we did not completely match our case and control groups regarding BMI, they were in the range of obesity according to BMI. The higher BMD noted over spine in diabetic group might be due to the higher BMI in this group.
A study performed in mainland China showed that postmenopausal women with type 2 diabetes had higher BMD and lower osteoporosis risk in the lumbar spine.22 Kao et al found that Mexican-American women with type 2 diabetes have a higher BMD compared to women without diabetes and increased BMD correlates with serum insulin levels.13 Our BMD results of subjects with type 2 diabetes is supported by other studies.14,23,24
One of the weaknesses of our study is that we did not determine the insulin levels. An association between insulin level, BMD and fractures may exist.12 Insulin has an anabolic effect on bone formation by binding with the IGF-1 receptor, which is present on osteoblasts in bone, resulting in higher bone mass.2 Type 2 diabetes is preceded by a period of insulin resistance. Hyperinsulinaemia may confer a protective effect on BMD, either directly through elevated fasting insulin12 or indirectly through BMI.25

The authors thankfully acknowledge Zahedan School of Medicine for support of the dissertation grant. In addition, the authors would like to thank the patients and healthy subjects who willingly participated in the study.