Objective: To emphasize the importance of regular exercising in dry lab in initial phase of learning of laparoscopic surgery by a practicing urologist.
Methods: The study was performed at Dry Lab -Jayaramdas Patel Academic Centre (JPAC) attached to Muljibhai Patel Urological Hospital, Nadiad, India.
The study is based on 30 sets of exercises of four standard tasks utilized to learn Hand-Eye coordination for Laparoscopic Surgery. All sets were performed by a single participant over a period of 19 days and the exercise record was retrospectively analyzed. The participant had limited exposure of one year in a low volume laparoscopy center.
Correlation between Exercise number and Task Completion Time (TCT) was calculated by Pearson\\\'s Correlation Coefficient and its significance is assessed by Student paired t test.
Results: The current study describes 30 exercises of 4 standard tasks for hand-eye-coordination. Although the study was completed in 19 days but there were two intervals which point to the objective of this study. First interval was of 3days and it occurred after 4th exercise. At 5th exercise the Task Completion Time started rising more than the 2nd exercise. This regression further worsened on 6th exercise which had an interval of 2 days. Here the (TCT) went up almost equal to 1st exercise (1050 vs 1054 seconds).
Mean time for IT1, IT2, IT3, IT4 and TCT of over all exercises were calculated as 24.2±3.7, 121.9±54.9, 233±73.5, 199±55.1 and 582.5±174.8 seconds respectively. Significant correlation was noticed between number of exercises performed and improvement in time taken for individual tasks (IT 2 to IT4) and TCT. However there was no significant impact on Task 1.
Conclusion: Regular Dry Lab exercises improves hand eye coordination and psychomotor skill dedicated continuous exercising has significant impact in reducing TCT.
Keywords: Practicing Urologist, Learning Laparoscopy & Dry Lab (JPMA 61:426; 2011).

Laparoscopy is known to have a long learning curve. But it is understandable that time taken to master a skill in a particular procedure is equally related to the interest and devotion of the surgeon.1
It is believed that urologic surgeons who wish to practice laparoscopic surgery and have not been exposed to it, should spend time in some laparoscopic center off course following the pathway of dry lab, wet lab, and theatre.2 Since such a urologist is already bypassing formal training to provide safe, and reliable care to patients no further shortcut should be sought. They should go through dry and wet lab practice exercises meticulously before moving on to patients for live surgeries. One of the authors who had limited exposure of one year in a low volume laparoscopy center while exercising in Dry Lab at JPAC India, observed the detrimental effect of intervals on TCT. It was felt by the authors to share this experience and to emphasize for beginners in Laparoscopy to maintain exercises without break specially in the initial phase. 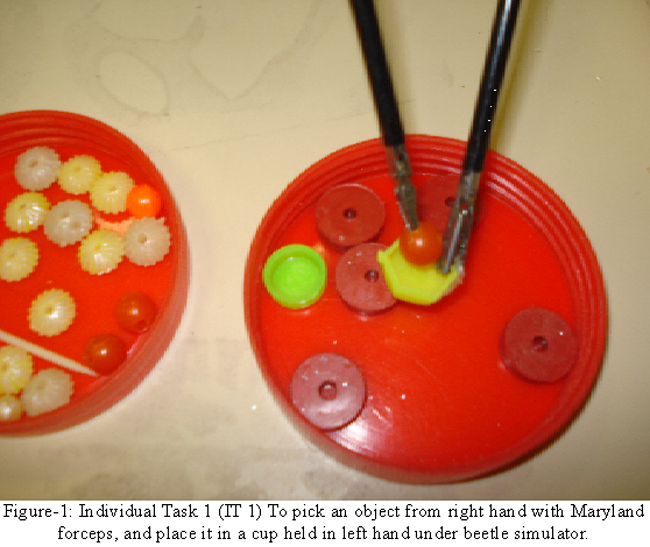 The current study describes 30 sets of 4 standard tasks described in methods. Although the study was completed in 19 days but there were two intervals which mark the objective of this study. First interval was of 3days, and it occurred after 4th exercise. And here at 5th exercise the TCT started rising more than the 2nd exercise. This regression further worsened on 6th exercise which had an interval of 2 days. Here the TCT went up almost equal to 1st exercise (1050 vs 1054 seconds).This impact of breaks in exercise on changing TCT is represented in line graph of Figure-2. 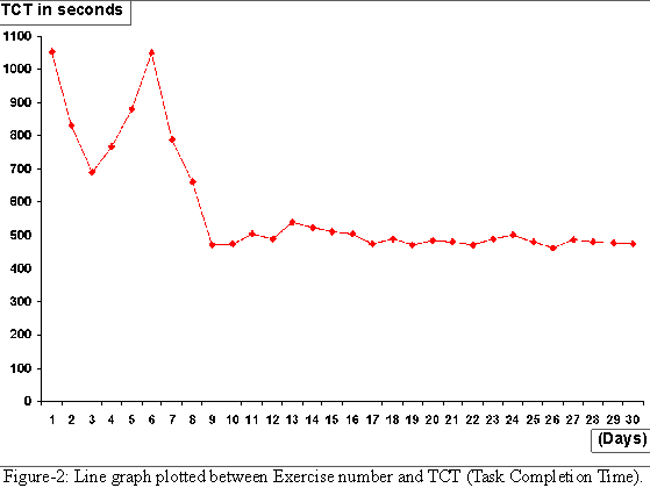 Significant correlation was noticed between number of exercises performed, and improvement in time taken for individual tasks (IT 2 to IT4), and TCT. However there was no significant impact on Task 1 (Table-2).

Learning laparoscopic surgery is inherent with some difficulties. These include loss of depth perception, hand-eye co-ordination, inverted manipulation under 2-D vision, small working space with limited instrument movement, and the necessity for precise planning of ports.3 A number of comparative studies have established the fact that laparoscopic-skill training programmes significantly improve operative performance.4,5 Derossis, and colleagues developed a series of structured tasks objectively measuring improvement in skill. Their study had two groups one practicing on laparoscopic simulator, and other not. Former was found to have significantly faster progression in skill.6 Tasks utilized in the current study have already been validated as an objective tool for practicing, and acquiring technical skills in a simulated environment.7
It is interesting to note that with ever increasing demand to learn laparoscopy, there are fewer centers which are offering a structured programme to the practicing urologist interested in learning the skill in time efficient manner. However the many centers, and societies who have felt the importance of training a urologist in laparoscopy has attempted to address the issue.2,8 Touijer, and colleague from The Memorial Sloan-kettering Cancer Center New York while describing the guidelines for faculty training who wish to continue with specialization in laparoscopic procedure, clearly recommended repeated practice as first step in learning laparoscopy.7 Gupta et al identified factors which differentiate between trainees, and experienced surgeons. They found the main factors were lack of awareness of different phases of learning namely cognitive, psychomotor, integrative and automatic phases, and also lack of synchronization. So Gupta et al recommended incorporating intensive dry lab training into the Training programme.9 Review of text, and literature clearly emphasizes on dry lab exercising in acquiring laparoscopic surgical skill. Be it a 5 days mini-fellowship programme for faculty or a modular training for residents for technically demanding procedures like laparoscopic radical prostatectomy.10,11 It is not only training rather continuous training on the pelvitrainer which is the basis of learning laparoscopic skills.10 The current study is reiterating the emphasis on continuous practice in Pelvitrainer, and the study reflects that intervals in practice period is clearly detrimental.
It was since 1986 when Semm described the first Laparoscopic Simulator - Pelvitrainer. Since then there has been great modification and technological advancements in the area of Laparoscopic Laboratory Training.4,12 One of the recent among them is the Virtual Reality Laparoscopic Training.4,13 However Munz et al through a randomized controlled trial suggested no superiority of virtual reality trainers over box trainers.4,14
It is prudent to realize that with increasing demand for minimally invasive surgery, there is a need to transform the whole generation of Urologists to Laparoscopic Surgeons. But it cannot come at the expense of patient\\\'s safety. Therefore there is no short cut for urologist already bypassing the formal training in laparoscopy as residents or fellows. Those interested in transformation have to be motivated, start exercising in Dry Lab, and Vet Labs, visit high volume Laparoscopic Centers, identify mentors, assist laparoscopic cases, start under supervision and then independent cases with realistic approach to ones limitation.2

Regular Dry Lab exercises improve hand eye coordination, and psychomotor skill. Dedicated continuous exercising has significant impact in reducing Task Completion Time. A urologist who has no or limited exposure to laparoscopy should be patient, and realistic about their weakness.
Shortcomings of study:
This study presents the data, and thus the impact of interval on a single participant .So study with multiple participants is required to validate the impact of individual variability for particular tasks.
Since the interval was in the initial phase of the exercising period only, so the impact in Task Completion Time with breaks in later phase can not be strongly inferred.