Knowledge, Attitudes and Practices of General Practitioners in Karachi District Central about Tetanus Immunization in Adults

Objective: To assess the knowledge, attitude and practices of general practitioners regarding tetanus immunization in adults.
Setting: The study was conducted in District Central, Karachi.
Study Design: This was a Knowledge, Attitude and practices (KAP) survey.
Methods: From a list of 1050 general practitioners (GPs), 100 were selected through simple random sampling and interviewed through a written questionnaire.
Results: Only 25% general practitioners had adequate knowledge about pre-exposure and13% both pre- and post-exposure tetanus immunization. All were ready to participate in any program to update their knowledge. Ninety seven petcent were practicing only post-exposure immunization. In unimmunized patients with history of road side/street injury, 55% started tetanus immunization with tetanus toxoid (TT) only, 43% with Anti Tetanus Serum/Tetanus lmmunoglobin (ATS/TIG) and only 2% with both TI and ATS/TIG. Only 13% GPs advised their patients to complete three doses of tetanus toxoid after initial contact.
Conclusion: As majority of GPs had poor knowledge and incorrect practices so interventions like seminars and display of immunization protocols in the clinics are recommended (JPMA 51 :367, 2001).

Tetanus though a vaccine preventable disease, still causes more than 50,000 deaths per year worldwide1,2. As a result of improved maternal immunization with TT, approximately 725,000 cases of neonatal tetanus are prevented annually3 but still, more than 270,000 newborns and 30,000 women die of tetanus world wide4. Major burden of the morbidity and mortality of tetanus is shared by developing countries without a immunization program. In USA less than 60 cases of tetanus (all types i.e., neonatal, maternal and others) are reported per year5. Exact burden of tetanus in adult population in Pakistan is not known. More than 100 cases of tetanus in adults were reported per year to Civil Hospital Karachi, during 1995-99. Eighty one percent of these were males. (Secondary data collected by the author in June 2000 with permission from Medical Superintendent, Civil Hospital, Karachi.)
In USA, all primary care offices and emergency rooms, in addition to post-exposure tetanus immunization, also provide pre-exposure tetanus immunization to non­immunized and booster to previously immunized adult population5. In Pakistan Expanded Program of Immunization (EPI) provides tetanus immunization to under one-year age children and pregnant women only. While the adult males are not covered for tetanus immunization through EPI. Two doses Ti’ coverage in pregnant women is only 51%, which is poorest in the region, as.compared to Bangladesh and India where two doses coverage is 85% and 73% respectively6. Forty two percent children under one year of age who have not completed three doses DPT primary series of active immunization are currently at risk for tetanus. Fifty eight percent children, who have completed the three doses DPT primary series of active immunization6, will be at risk at tetanus in future5 because as a policy EPI does not provide boosters.
Emergency departments in most hospitals of Karachi, including government hospitals provide only post-exposure tetanus immunization services, which is also incomplete. As after a single dOse of ATS/TT given on first contact, follow up facilities are not available for these patients to complete the primary series of active immunization.
General practitioners in Pakistan provide health care to 70-80% of the population7. This study was conducted to assess the knowledge, attitudes and practices of general practitioners regarding tetanus immunization in adults and to formulate the suggestions for effective and efficient utilization of general practitioners services to the population.

This was a knowledge, attitude and practices survey of qualified MBBS doctors practicing in Karachi District Central. A list of practicing doctors was compiled by combining the informations obtained from Mediguide magazine, Essa Laboratory, Mehdi Manji Laboratory, Karachi Diagnostic Laboratory, City Laboratory, Ehsanullah Laboratory and representatives of GlaxoWelicome, Bayer, Abbott and Highnoon Pharmaceutical companies. Out of a list of 1050 general practitioners, 100 were selected through simple random sampling using table of random digit. Those general practitioners who were not practicing tetanus immunization were excluded from the study. Most of them were not practicing immunization, because of the risk of anaphylactic reaction. The study was conducted through a written questionnaire after pre-testing. Daily 5 general practitioners were surveyed and survey was completed in one month. Data was transferred, cleaned and analyzed by computer using EPI-info program Version 6.0.
Knowledge
Pre-Exposu re Immunization Knowledge
Five questions on pre-exposure immunization given below, were asked. If all were answered correctly then the knowledge was considered adequate. Knowledge explored were: tetanus toxoid is used for active immunization, method of administration of tetanus toxoid, dose and number of doses tetanus toxoid, required for primary series of active immunization and the interval between the doses and booster.
Post-Exposure Immunization Knowledge
Following questions on post-exposure immunization were asked and if they were correctly answered then the knowledge was considered adequate. Knowledge explored were of simultaneous administration of ATS/TIG and IT and route and method of administration of the vaccines
Attitudes
1. Attitude was categorized on rating scale.
There were 5 closed ended questions to assess the attitude. Each question had five responses, so each question had maximum five marks and a minimum one mark. A score of21-25 was regarded as strongly favorable attitude.
Score of 16-20 was considered as favorable attitude, score of 6-10 was considered as unfavorable and score 5 and below was graded as strongly unfavorable attitude.
2. Attitude was considered favourable if the agreement was on the following statements:
Adults should be routinely immunized against tetanus.
Regular seminar/refresher courses regarding immunization are needed.
Immunization against tetanus is the responsibility of all inclusive of GPs.
Routine tetanus immunization in adults is neglected in our country.
Updating knowledge on adult immunization can be achieved through participation in a training program.
Practices
Practice questions included the following variables:
Whether pre-exposure or post-exposure immunization.
How general practitioners starts tetanus immunization in an unimmunized patients, with history of road side/street injury. After initial contact whether they follow the patients for completing primary series of three doses of TT.

Study population comprised of 89% males of whom 68% had more than 5 years of experience. Seventy three percent were attending less than 50 patients per day:
Twenty-three percent had worked/were working in the casualty department of either a public or private hospital. Eight percent general practitioners had vaccine at their clinic and all of them had only tetanus toxoid. None of them had attended any seminar/workshop regarding adult immunization however all claimed to have read some type of medical literature.
Knowledge of General Practitioners
Only 25% GPs had knowledge about pre-exposure and 13% about both pre- and post-exposure tetanus immunization (table). 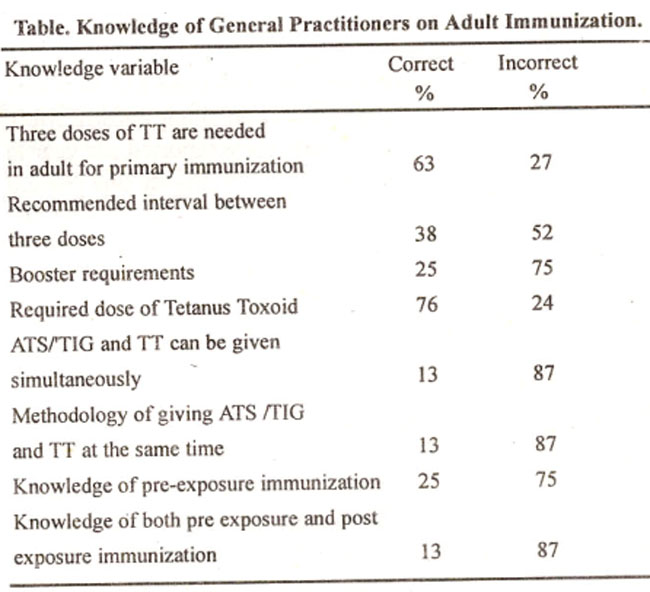 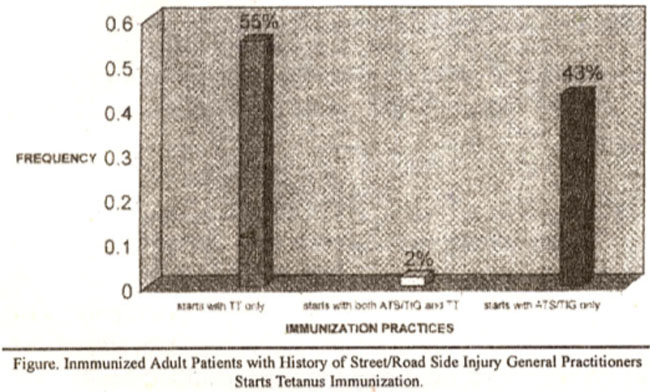 After initial contact only 13% advised their patients to complete three doses of tetanus toxoid.