A 40 years old male whose co-morbid included a long history of hypertension also suffered from pulmonary tuberculosis at the age of 18 years. Three years back he presented at a hospital in United States of America with complaints of fever, vomiting and lethargy of a months duration. Laboratory investigations revealed deranged renal functions and an ultrasound abdomen showed presence of shrunken kidneys. Hence a diagnosis of chronic renal failure was made. He was then started on hernodylasis.
He subsequently required hospital admissions in December 1997 for the management of urinary tract infection and later on in January 1998 with bilateral pleural effusions. Finally in view of his deteriorating renal functions and henceforth its various complications he was offered the option of renal transplantation. 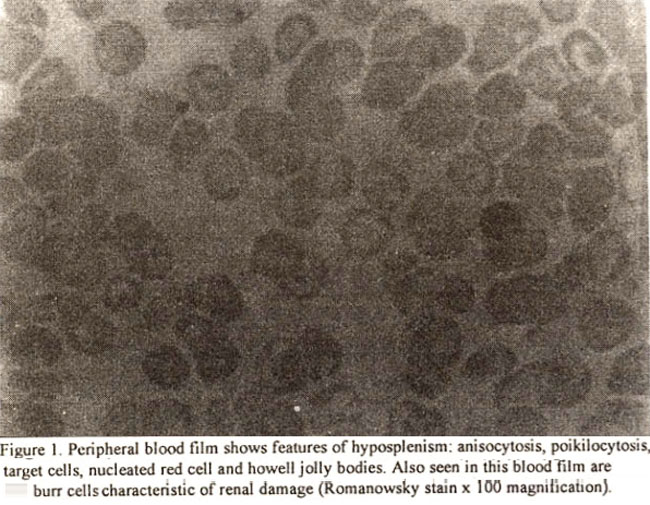 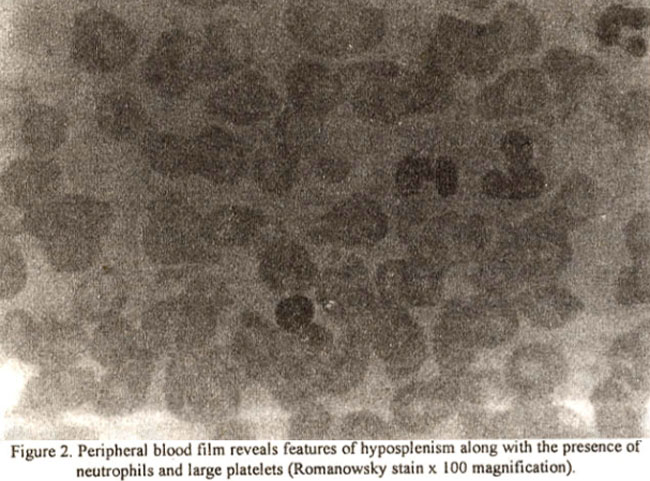 Amyloidosis is a rare monoclonal plasma cell disorder. The evaluation procedures include clinical signs and symptoms - and immunoelectrphoresis and immunofixation of serum and urine. The findings of a monoclonal protein necessitates a biopsy to confirm the diagnosis. Biopsy of the affected organ confirms the diagnosis but congo red staining of bone marrow specimen or subcutaneous fat aspirate are non-invasive, sensitive and less expensive, procedures2. Recently attention has been drawn to hyposplenism in systemic amyloidosis3,4. Infact poor splenic function is now an accepted finding in a wide range of systemic disorders including coeliac disease, ulcerative colitis, Crohn’s disease, sickle cell disease, primary thrombocythemia and systemic lupus erythmatosus5. Involvement of spleen in systemic amyloidosis affects the reticulum of the pulp and venous sinuses which in turn alters one the most important functions of spleen i.e., phagocytosis and sequestration.This functional hyposplenism results in the presence of intraerthrocytic inclusions (i.e., howell jolly bodies) and abnormally shaped erythrocytes (i.e. poikilocytes).This indeed has been previously reported in the literature6,7.
In this case, findings on the peripheral blood film strongly suggested impaired splenic function which, later on helped in establishing a diagnosis of systemic amyloidosis through rectal and bone marrow biopsy.
In conclusion, this case further highlights and strengthens the importance of peripheral blood film in the diagnosis of functional hyposplenism secondary to systemic amyloidosis.