Objective: To assess the effectiveness of different treatment modalities for benign ureteric strictures.
Setting: Department of Urology, Al-Emiri Hospital, Kuwait.
Patients and Methods: Twenty four cases (19 unilateral and 5 bilateral) of ureteral strictures were reviewed. Retrograde endoscopic dilatation was tried, initially for all of the strictures. Technical failure was observed in 8/29 (27.5%) strictures. Three of them were negotiated through antegrade endoscopic dilatation, while in 5 of the strictures open surgical repair was required. Both the balloon and fascial dilator were used for endoscopic dilatation; ureteroneocystostomy with or without Boari’s bladder flap were the procedures employed for open repair.
Results: Of the 29 strictures the majority were secondary to Bilharzial cystitis (66.6%). Twenty-four (82.7%) strictures underwent endoscopic manipulation and 5 (17.2%) had open repair. Among the 24 strictures that had endoscopic dilatation, 21(87.5%) were managed in retrograde fashion while in 3 (12.5%) technical failures were due to the in ebility to canulate the strictured ureter with a guide wire in retrograde fashion. All these patients were treated successfully by antegrade stenting. Among 24 strictures that were initially managed with dilatation and stenting, recurrence was found in 9 (37.5%) patients. The group had open repair; no recurrence was found during the follow up. There was no serious intraoperative or postoperative complications of both the procedures. Patients were followed up with intravenous urography.
Conclusion: Endoscopic dilatation is an effective treatment modality for partial benign ureteric strictures. However, open ureteroneocystostomy with or without Boari’s flap or Psoas hitch should be reserved for complete or recurrent ureteric strictures. Bilharzial strictures are amenable to endoscopic dilation but recurrence rate is high and re-implantation is frequently required (JPMA 51:351,2001).

Before the development of endourological instruments and techniques, ureteral strictures were managed by open repair. Davis reported successful clinical results with ureteral anastomosis and ureteral stenting1. Treatment of ureteral stricture has changed dramatically with the development of less invasive surgical techniques.
Hunner was among the first to recognize the significant pathology that can result from ureteral strictures as well as the need for prompt repair2. In recent years, the widespread use of urinary tract endoscopy has led to an increase in the incidence of iatrogenic ureteral strictures, as well as improvement in the ability to treat such strictures in a minimally invasive manner. While a variety of open surgical techniques; including renal mobilization, psoas hitch, Baori flap, ureteroneocystostomy, urinary diversion, transureterocystostostomy, intestinal interposition, renal autotranspiantation and nephrectomy, can be used to treat patients with ureteral strictures. All these require major abdominal surgery with its attendant morbidity, need for hospitalization and prolonged recovery3,4. However, improved instrumentation and advances in endourological techniques have provided less invasive means of treating ureteral stricture disease that are likely to lead to decrease in morbidity and cost.

Twenty four patients were studied (16 males and 8 females) with an average age of 38.4±11.53 years (range 14 to 56 years) for benign ureteral strictures with either open repair (5) or endoscopic manipulation and dilatation (24). Eight of the patients had immediate nephrostomy at the time of presentation and after complete evaluation treated by an open repair or endoscopic manipulation. Pre-operative diagnostic evaluation included an excretory urogram, ultrasonography, DTPA renogram as well as retrograde or antegrade ureterogram. Three of the 24 patients had bacteriuria, which was treated with systemic antimicrobial first and then intervention carried out.
All the patients had pre-operative evaluation endoscopically by retrograde pyelogram and an attempt was made to negotiate all the 29 strictures with rigid ureteroscope. In eight strictures technical failure was observed in retrograde fashion so five of these strictures were treated by open surgical repair as they were complete strictures and 3 were managed with antegrade stenting. The 24 strictures that were managed endoscopically, an attempt was made to negotiate the stricture in a retrograde fashion. In 3 strictures this was unsuccessful so antegrade stenting was carried out.
In cases where retrograde dilatation was done, initially 0.035 guide wire was passed then subsequent dilatation was done with balloon dilators in non-bilharzial strictures while Bilharzial strictures were dilated with fascial dilators and sequential dilatation was performed upto 10 Fr.
Antegrade approach was used in three strictures, 2 of them were secondary to bilharziasis and one was post­ureteroscopy with dormia extraction of stone. A percutaneous tract was created, then 0.03 5Fr guide wire was passed and retrieved through ureteric orifice under vision. Over the guide wire fascial dilators were passed from below and sequential dilatation done upto 10 Fr. DJ stents (4.7-6 Fr) were left indwelling for 30 days after endoscopic dilatation.
Ureteronecystostomy, including a Boari bladder flap was used for open repair. Post-operatively all patients were stented with 6F catheter for 14 days. Nine strictures in the endoscopic group had recurrence, eight of them were secondary to bilharziasis while one had history of stone passage. Two of the recurrent strictures required open repair i.e., re-implantation with excision of the strictured ureteric segment because endoscopic manipulation was not possible. All were secondary to bilharziasis while 7 of them had re­dilatation after 6 weeks and in 6 of them had secondary bilharziasis and one had history of stone passage. There was no recurrence observed in the group that had open repair. The patients were followed for an average of 11 months (range 6-24 months). Intravenous urography and ultrasonography were used to see the progress of the disease. One of the patients in endoscopic group was lost to follow-up after 3 months.

All patients presented with flank pain and hydronephrosis. Among the 24 patients 16 (66.6%) were secondary to Bilharzial cystitis, 3 (12.5%) following spontaneous stone passage, 3 (12.5%) had ureteroscopy with insitu lithotripsy, 2 (8.3%) related to radiotherapy, 3 (12.5%) of the patients bad hysterectomy, while 1 (4.1%) had anterio-posterior resection. No cause was found in one case. One patient that was related to hystrectomy had pelvic kidney (Table). 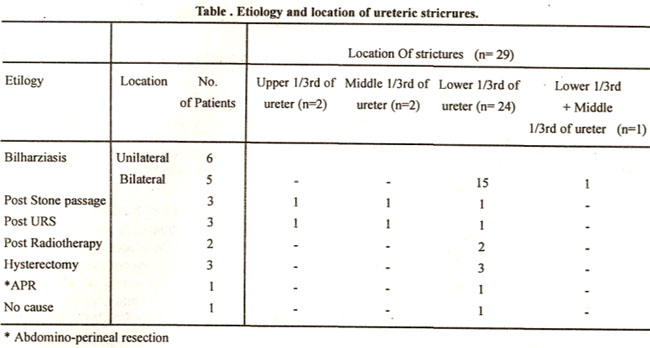 Of the 29 ureteral strictures, upper third of the uretenc segment was involved in 2 (6.8%), middle third segment 2 (6.8%), while lower third segment in 24 (82.7%) and I ureter had both middle and lower ureteric involvement which was secondary to Bilharziasis. Nineteen patients had unilateral involvement. Bilateral involvement was found in 5 patients, all were located in lower third and secondary to bilharziasis. Three of the 24 patients had urinary tract infection that was treated with systemic antimicrobials.
All the 24 patients were evalated post-operatively by intravenous urography and ultrasonography to determine the success of the operation. All patients who had open repair did not show ureteral dilatation on ultrasonography during the follow up. No intraoperative or post-operative complication was noted. The mean hospital stay was 15 days. Twenty nine diseased ureters were manipulated initially with rigid ureteroscopc. Endoscopic approach was possible in 24 strictures while in5, open repair was done as the strictures were complete and endoscopic manipulation was not possible. The endoscopic approach was technically successful in 21(87.5%), strictures in a retrograde fashion. Only 3 (12.5%) patients had failure and were successfully dilated and stented via art antegrade approach. Average hospital stay was 2.5 ± 0.5 days (2-3 days). No intraoperative complication was noted.
Among the 24 patients in the endoscopic group, eight with (bilharzial) cystitis and one with history of stone passage had recurrence within 6 weeks. Re-implantation with excision of strictured ureteric segment was performed in 2 cases of bilharzial cystitis while re-attempt for endoscopic dilatation was made in patient who had history of stone passage as well as six cases of bilharziasis. No recurrence of stricture was observed in open group during the follow up. Hospital stay was 15 days. No intraoperative complication was noted.

Advances in endourological techniques and with the development of ureteroscopic instruments, have led to the ability to treat most of the patients with uretcral strictures in a minimally invasive manner. Open surgical procedures which were the main stay of treatment for the ureteral strictures initially, are now only reserved for long strictures as well as for failed minimally invasive procedures. As endourological procedures for strictures are likely to decrease morbidity and costs, they are usually preferred.
McDonald and Calams have shown that the ureter readily regenerates mucosa as well as muscle layers resulting in correction of the stricture5. In our series 5 patients were managed initially by ureteroneocystostomies with or without Boari’s repair, had successful drainage. No intraoperative or post -operative complication was noticed. Our data co-relates with those of Eugena et a!6.
Sharfi and Rayis7 showed 87% of the lower ureteric strictures in Bilharziasis. In cases of Bilharziasis 93.7% had lower ureteric involvement in this study. In 1 ureter both lower and middle ureteric strictures were found. Sharfi et a!7 found only 25% of the dilated ureters truly obstructed and required excision and ureteroneocystostomy in Bilhaziasis. Of the 16 strictures in our series, only 12.5% had complete strictures that required excision and ureteroneocystostomy and 87.5% of the strictures were dilated endoscopically.
The majority (73%) of the benign strictures were situated in distal third of the ureter as shown by Hoe8. Of the 29 strictures we found 82.7% lower urcteric involvement. Hoe8 had 10.5% of the strictures that could not be crossed by guide wires and those patients required re implantation of the ureter whereas we had 5/29 (17.2%) of the strictures which required reimplantation of ureter.
No complications directly related to balloon dilatation was observed in our series. Same results were observed by Hoe8. Netto et a19 reported 57% success rate with an endoscopic dilatation with a mean follow up of 21 months. In contrast, of the 24 strictures we achieved 62.5% success rate with a mean follow up of 8.1 months (range 6-18 months).