Objective: To investigate whether estimation of thyrotrophin (TSH) and thyroxine (T4) is significant to assess the thyroid status of diabetic patients.
Materials and Methods: Fifty patients with type 1 diabetes (25 male and 25 female) aged 9-50 years were included. The mean duration of diabetes was 6.7±4.3 years. Clinically they were not suffering from any systemic disease or endocrine ailment. Twenty-six, age and sex matched, normal controls were also included. The TSH and and T4 were estimated in the sera of all the subjects using the commercially available ELISA kits.
Results: The mean±SD concentration of TSH was raised significantly (p<0.001) in the patients as compared to the controls, whereas the T4 concentration was comparable. Furthermore, 30% diabetics showed significantly elevated TSH concentration than the controls.
Conclusion: It is proposed that the estimation of TSH in the patients with type I diabetes may be useful in the early identification of thyroid dysfunction (JPMA 51:349,2001).

Diabetes mellitus is a group of metabolic disorders of carbohydrate metabolism in which glucose is underutilised, causing hyperglycemia1. The revised classification of diabetes published in 1997, eliminates the terms insulin dependant diabetes (IDD) and non-insulin dependent diabetes (NIDD) and describes type 1 and type 2 diabetes respectively2. The autoimmune process leading to type 1 diabetes begins years before the clinical presentation and requires 80 to 90% reduction in volume of Beta-cells of the pancreas to develop overt manifestation of the disease3,4.
A lymphocytic infiltrate of the pancreatic islets has been seen at autopsy in patients who die within 1 year of onset of clinical type I diabetes. A strong association of type 1 diabetes with other autoimmune endocrine diseases exists and supports the hypothesis that autoimmunity in type 1 diabetes is not restricted to the destruction of pancreatic 13-cells5. The thyroid may be another immunological target in type 1 diabetes. Bruek et al found thyroid microsomal antibody (TMAb) in the sera of 50% of insulin dependent diabetics and 27% of these seropositive patients were found to be suffering from hypothyroidism6.
Biochemically decreases in thyroxine and tri­iodothyronine concentrations result in hypersecretion of pituitary thyrotnophin and an amplified rise in the serum TSH levels. The latter is a key laboratory finding in the early diagnosis of thyroid failure. In subclinical hypothyroidism. thyroid hormone levels may remain within the normal reference interval, but the TSH concentration is increased7,8. The present study was planned to estimate TSH and T4 concentrations in the sera to type 1 diabetics to assess the possible thyroid dysfunction.

Fifty already diagnosed patients of type 1 diabetes, 25 males and 25 females, were selected from Diabetic Clinic, Mayo Hospital, Lahore. The age of all the patients was 9-50 years and they were taking insulin for their glucose control. Thyroid ailment was ruled out by taking clinical history and performing physical examination. They were not suffering from any systemic disease. Furthermore. 26 age and sex matched healthy controls were also included in the study.
Five ml random blood sample was collected aseptically from the cubital vein using the disposable syringe from each subject. The serum obtained was separated in properly labeled sterilized vials and stored at -8°C till analyzed. TSH and T4 were estimated by using the commercially available ERLISA kits (International limmunodiagnostic. Junolane, Foster City, Canada). The method is based on the principle of competitive solid phase enzyme immunoassay9. The data was represented as mean ± SD values and the significance was determined using the Students “t” and chi-square tests10. 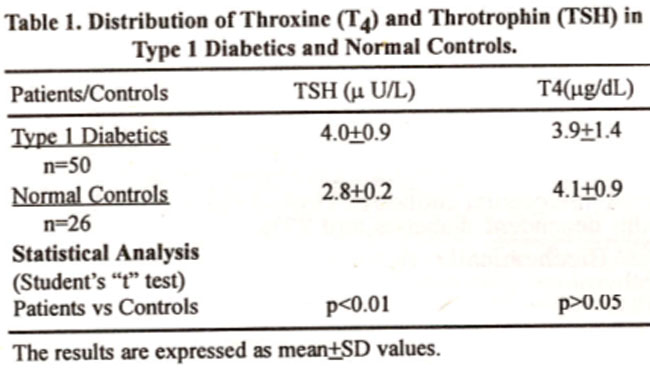 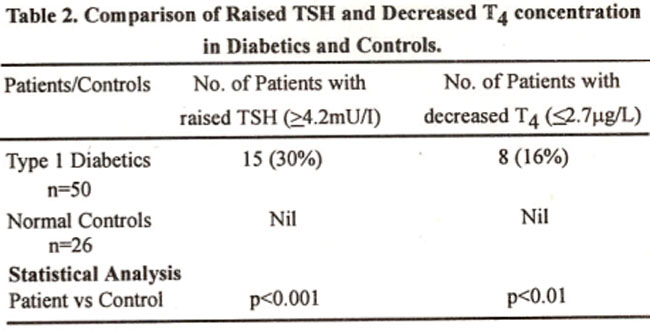 In humans, the association of autoimmune disease of one endocrine organ with that of another endocrine organ is well recognized11. Patients with chronic thyroiditis are noted to have a much higher prevalence of pernicious anemia than would be expected in a random population matched for age and sex12. Other associations, such as Addison’s• disease, thyroiditis and sometimes diabetes mellitus are also seen13. Thirty percent of patients with chronic thyroiditis, have concomitant parietal cell auto antibodies in ’their serum and thyroid auto antibodies have been demonstrated in up to 50% of pernicious anemia patients11. The increased frequency of other autoimmune disease and circulating auto antibodies to different tissues other than pancreatic islet-cells, e.g., thyroid microsomal,. Thyroglobulin,. gastric parietal cells, adrenal cortex, mitochondria, smooth muscle, and intrinsic factor have been reported in insulin dependent diabetes (IDD)14. It is speculated from our previous findings of thyroid auto antibodies in IDD patients that an increased risk of developing autoimmune thyroiditis ultimately leading to thyroid failure is probably imparted to such patients15,16.
In the present study significantly increased serum TSH concentrations (p< 0.01) has been observed in the type 1 diabetics as compared to the normal controls. Besides. 30% and 16% diabetic patients showed significantly elevated TSH (P<0.001) and decreased T4 concentrations than controls. Our findings are in accordance with other workers who observed 5-20% IDD patients with raised and 3-8% with depressed 14 concentrations17,18. The increased TSH is an early and sensitive index of the occurrence of hypothyroidism19. Hence, the estimation of thyrotrophin and thyroxine may be helpful in the identification of thyroid dysfunction in patients with type 1 diabetes.