Objective: To determine the indications, associated morbidity, mortality and histopathological findings in women who underwent hysterectomy for non-neoplastic indications at Liaquat National Hospital Karachi.
Material and Methods: This is a five year retrospective case note study of 143 women who underwent hysterectomy, excluding -all those performed for benign or malignant pelvic neoplasms (excluding fibroids) and hysterectomy following childbirth for postpartum haemorrhage.
Results: Menorrhagia was the commonest indication for performing hysterectomy. The majority of the patients were in their forties; the commonest post operative complications were pyrexia, urinary tract and wound infections in 16% of the patients. There was no mortality associated with the procedure. The histopathology of the specimens revealed adenomyosis followed by leiomyoma to be the commonest pathology.
Conclusion: It appears that adenomyosis is a common pathology in women from various ethnic and social backgrounds in Karachi, who are suffering from menorrhagia. Early diagnosis .with high-resolution ultrasound is possible and hysterectomy may be offered earlier to these women, as they do not usually respond to medical treatment (JPMA 51:346,2001).

Hysterectomy is a frequently performed operation in gynaecological practice. Large differences in rates exist, varying up to six folds1. The differences may relate to difference in training of physicians, medical practice and the availability of hospital beds. Substantial disagreement persists over the appropriate indications, for hysterectomy2-5. Although the operation appears to have a low mortality with one death per thousand, there is significant morbidity associated with the procedure with a quarter to half of all women undergoing the procedure developing some morbidity, fever and haemorrhage being the most common6-9. Late sequelae may include the residual ovary syndrome, depression and an increased risk of cardiovascular disease10,11. This retrospective study was to determine the indications, immediate postoperative complications and the histopatholgy related to hysterectomy performed in a tertiary care hospital of Karachi.

This is a five-year retrospective case note study of 143 women who underwent hysterectomy for non­malignant conditions at Liaquat National Hospital (LNH) from 1992 to 1996.
This hospital has a busy obstetrics and gynaecology department that caters to the middle and lower socio­economic classes from all ethnic groups in Pakistan. It also erves as a tertiary referral center for complicated cases from all over Karachi and other parts of the country.
The decision to perform a hysterectomy was taken by a consultant gynaecologist after discussion of the pros and cons of the procedure with the patient, usually after failure of medical treatment. Exceptions were cases with severe anaemia who requested surgical treatment as their first option. The patients were admitted a day prior to hysterectomy. Prophylactic antibiotics (amoxycillin with clavulenic acid or a second generation cephalosporin with metronidazole) were given pre operatively to all patients. Most of the operations were performed under general anaethesia, with a few under spinal anaesthesia. Surgery was performed by a consultant or a senior registrar resident under supervision of a consultant.

The miscellaneous group included patients having postmenopausal bleeding, intermenstrual bleeding and excessive vaginal discharge.
Prior medical treatment with combined oral contraceptives, progestogens, mefanamic acid and tranexamic acid, was tried or suggested in all the cases with menorrhagia. The women who underwent hysterectomy were either non-compliant, requesting surgery or failed to respond to medical treatment with worsening anaemia. Most of the women were in the age group 40 to 49 years (Table 2). 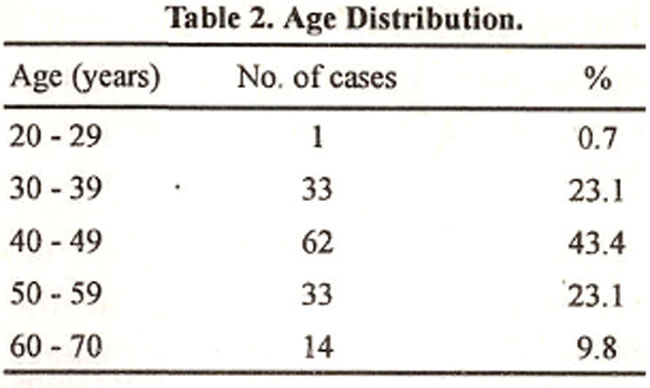 The ovaries were conserved in 81 (57%) cases with an average age of 41 years and removed in 62 (43%) with an average age of 45 years.
One hundred and twelve (98%) of the abdominal hysterectomies were performed through the transverse suprapübic incision. The visceral and parietal peritoneum was left unsutured in 86 (60%) of the cases, as individual consultants preferred. Forty patients had preoperative associated medical problems, like hypertension (19), diabetes (13), thyrotoxicosis (3), asthma (2), varicose veins (2) and gastric ulcer (1).
Postoperative complications occurred in 25 patients (Table 3).

In 10 patients who developed pyrexia, the fever settled on its own after 24 to 36 hours. The rest were given specifically directed treatment.
The average hospital stay for the procedure gradually decreased from an average of 9 days in 1992 to six days in 1996. Some of the patients went home as early as 3 days after their operation and reported back to outpatients for stitch removal. The commonest pathology found on histological examination of the specimens was adenomyosis, followed by lelomyoma with or without adenomyosis. In some specimens more than one pathology was found (e.g., fibroids and chronic cervicitis), as shown in Table 4. 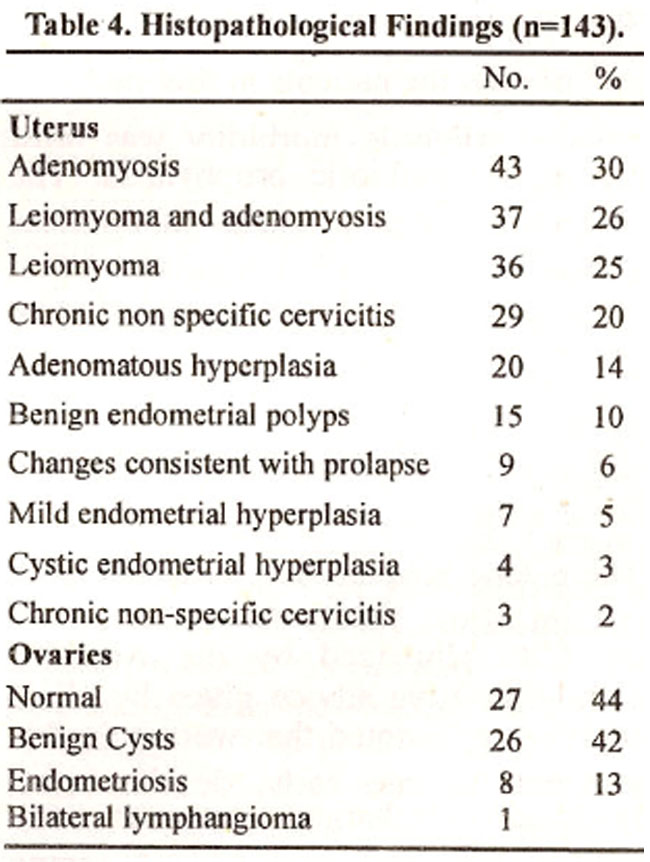 A disruption in the hormonal pattern in the perimenopausal years, results in the symptomatic changes in the menstrual pattern of most women5,7. The indications for hysterectomy in this study for the majority of cases, was excessive menstrual bleeding alone or in combination with fibroids or pelvic pain. Most of these women were aged between 40 to 49 years (average 43 years) and the pathology found in the specimens in the majority of cases was adenomyosis and leiomyoma. These results generally conform to results obtained from similar studies4,8,12. The route chosen for performing hysterectomy was abdominal in majority of the cases, with only 21% performed vaginally (all with utero-vaginal prolapse, excluding the LAVH). Despite evidence that the vaginal route is associated with fewer complications and faster recovery, more than two thirds of the hysterectomies continue to be performed abdominally9.
Due to non-availability, other effective alternatives to hysterectomy like the levenorgestrel intrauterine contraceptive device (Mirena)13 and endometrial resection14 were not offered to the patients in this study.
There was no mortality associated with hysterectomy in this study. Febrile morbidity was most frequently recorded, despite antibiotic prophylaxis. The place for antibiotic prophylaxis with abdominal hysterectomy remains disputed, with suggestions that surgical technique may be a more significant factor15,16. Injury to the urinary tract is a serious but infrequent complication of hysterectomy8. There were 2 cases of bladder injury recorded in this audit. Both these patients had had previous pelvic surgery with resultant adhesions.
The average length of hospital stay has decreased progressively from 1992 to 1996. Overall vaginal hysterectomy was associated with a shorter hospital stay. Recovery appears to be influenced by the women’s expectations and the perioperative advice given by clinic and ward staff. It was generally noted that women in this study were reluctant to go home early, despite being clinically well enough to be discharged. However, early discharge home is acceptable and preferable to some women.
A review of medical literature reveals that although the majority of women continue to have normal ovarian function following hysterectomy, a substantial number of women experience premature ovarian failure10. It has also been shown that hysterectomy approximately halves the risk of ovarian cancer17.
Psychological problems may occur following hysterectomy, the most frequently reported being anxiety and depression11. We were unable to evaluate this in our study. Adenomyosis appears to be the commonest pathology (3 0%) in our study, increasing to 56% when cases with concomitant leiomyoma are included. Similar results have been reported from Lahore, Pakistan12. The incidence of adenomyosis reported in literature ranges widely from 5% to 70%18,19. It is a histological diagnosis and carries a poor preoperative diagnostic accuracy, clinical suspicion being the mainstay. In order to improve diagnostic accuracy, transvaginal ultrasonography has been shown to be of value20,21. Magnetic resonance imaging (MRI) is highly specific for accurate preoperative diagnosis of adenomyosis22. However, as it is expensive and not available in most hospitals, it cannot be routinely used for this purpose. It appears that hysterectomy is safe in our setup and carries a low morbidity without mortality. Menorrhagia due to adenomyosis, is generally refractory to medical treatment and endometrial resection and women with this problem continue to suffer until their uterus is removed. Pakistani women in general are prone to anaemia due to high parity, poor birth spacing and inadequate nutrition. They generally seek medical attention late, compared to women from developed countries. It is possible in our set up to perform high resolution transvaginal ultrasonography in women complaining of heavy menstrual bleeding, so that hysterectomy may be offered earlier to these women to curtail their suffering, if adenomyosis is suspected.