Tumours of the salivary glands are relatively infrequent and account for less than 2% of all human tumours1,2. These comprise a wide variety of benign and malignant neoplasms, which exhibit difference not only in biological behavior but in prognosis as well3-6. Overall, benign tumours of the salivary glands tend to present somewhat earlier than malignant ones6.
Many studies have been carried out in the West3-6, however published data in Pakistan is scanty. The risk factor and demographics of our population are different which may lead to a different age of the population at risk. Therefore, this series describes the prevalence of salivary tumours, in a hospital-based sample and characterizes them according to age, sex and anatomic location.

Data was collected from the surgical pathology files of the histopathology section of pathology department of the Aga Khan University Medical Centre. The study included all cases of salivary tumours diagnosed during the eight-year period, 1991 to 1998. Cases were then characterized according to their histological subtypes, age, sex and anatomic location of the tumours.
The histological evaluation of these lesion was performed on Hematoxylin and Eosin stained Sections of paraffin embedded tissue. Special stains like Periodic Acid Schiff (PAS) with and without diastase, PAS with Alcian Blue Reticulin were done wherever indicated. The immun oh istochem ical evaluation, if required, was performed using Peroxidase Anti-Peroxidase (PAP) technique. The monoclonal antibodies used include Cytokeratins, Vimentin, Leukocyte Common Antigen (LCA), Pan-B (L-26, CD 20), Pan T (UCHL 1), S-l00 protein and Alpha Smooth Muscle Antigen (ASMA) depending upon the nature of lesion. The diagnosis of individual tumours was based on the 1991 World Health Organization Classification. Patients with more than one specimen from the same lesion were counted once. 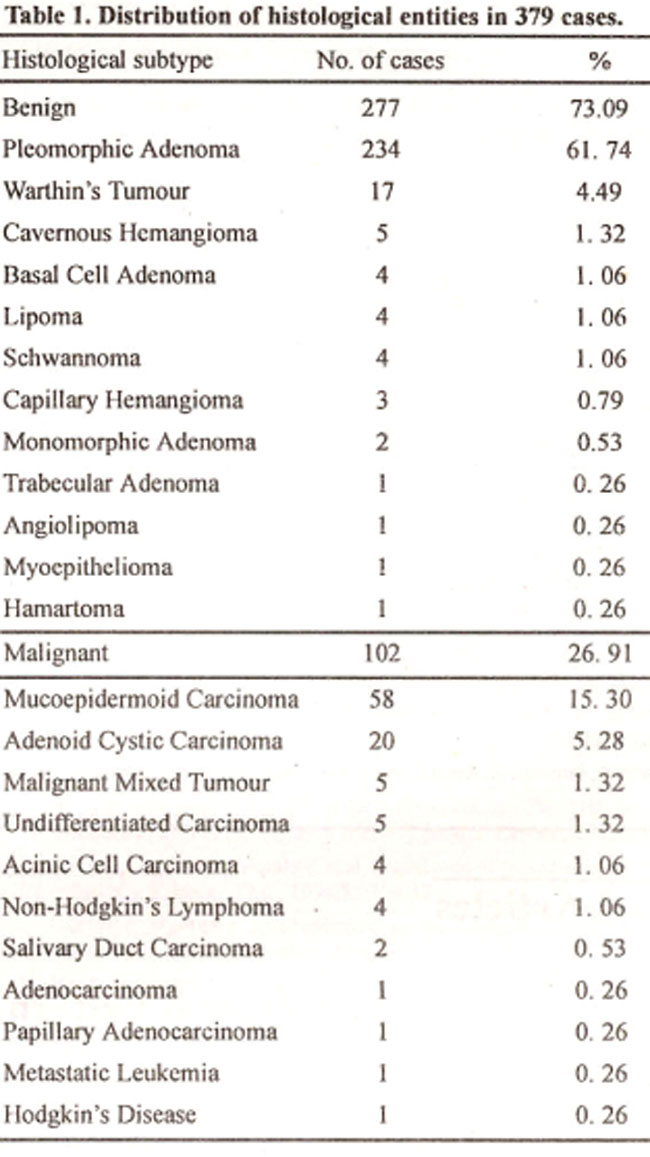 Table 1 describes the relative distribution of various histological subtypes of salivary tumours. Of these, 73 .09% were classified as benign and 26.9 1% as malignant.
Pleomorphic adenoma was the most frequently diagnosed benign salivary neoplasm (6 1.74% of all cases and 84.5% of benign tumours), followed by Warthin’s tumours (4.49% of all tumours and 6.14% of benign lesions). Mucoepidermoid carcinoma was the most commonly encountered malignant tumour, accounting for 15.3% of all. tumours and 56.9% of malignant lesions. Adenoid cystic carcinoma was the second most common type, making up 5.28% of all tumours and 19.6% of all malignant tumours. Many other categories were also represented in relatively smaller numbers. 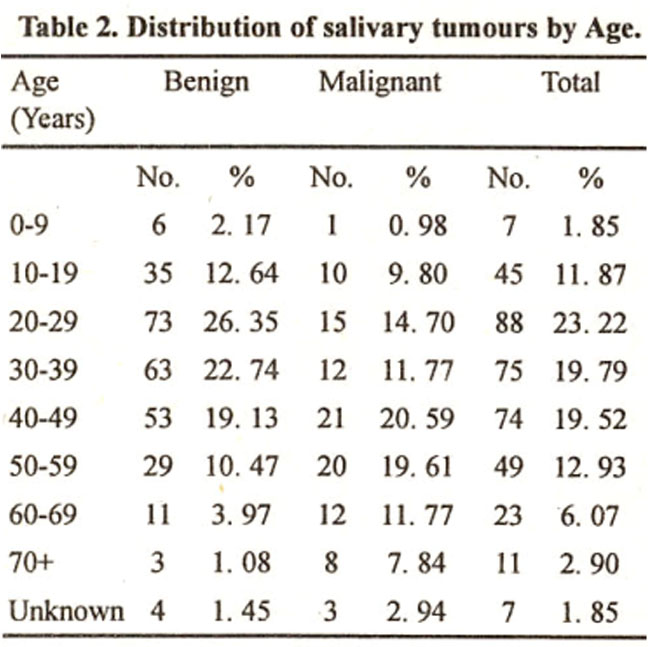 Table 2 summarises the distribution of salivary tumours in various age groups. Majority (54.9%) of the salivary tumours were diagnosed during 2nd to 4th decades of life. The median age at diagnosis was 35 years, with a range of 1-79 years. The median age for patients with malignant lesions (44 years) was 12 years older than for patients with benign tumours (34 years).
Regarding anatomic distribution of salivary gland tumours, three hundred and fourteen (82.85%) originated in the parotid glands, forty-seven (12.4%) in submandibular glands, three (0.8%) in minor salivary glands and two (0.52%) in sublingual salivary glands. Site of origin was not kown in thirteen (3.43%) cases. Overall, there was a slight predominanace of left-sided tumours.
The four most common sub-categories were then analysed on the basis of age, sex and location. There were more women than men affected by pleomorphic adenoma and adenoid cystic carcinoma. However, a predominance of males was seen in mucoepidemoid carcinoma and Warthin’s tumours. In each morphological subtype, parotid gland was the most common site of the tumour. The median age varied greatly, with the youngest (32 years) for pleomorphic adenoma and the eldest (50 years) for Warthin’s tumour.

Tumours of the salivary glands are relatively uncommon, however, their multifaceted clinical presentation, varied morphologic configuration and relatively unpredictable prognosis continue to attract significant medical interest7. Environmental and hereditary factors have a considerable impact upon the geographical distribution of cancer8.
In the present study, the tumours of the salivary glands were more common in males especially the malignant lesions. High male to female ratio has been reported2,9-11. This finding contrasts with the overall female predominance reported in Western Literature1. In our series, benign tumours, on the average, presented a decade earlier than malignant tumours, is in accordance with the published literature3-6.
More than 90% of the tumours in our study were of epithelial type and parotid was the most commonly involved gland, similar to the published literature1,6,12,13.
In this study, Pleomorphic adenoma was the most frequent histological type, mostly in the 3rd decade of life. It compromised 61% of tumours correlating well with other series3,6. Warthin’s tumour was the second common benign neoplasm.
Amongst malignant tumours, mucoepidermoid carcinoma was the most common lesion in our series, predominantly affecting the parotid gland (85.7%). Most of these were seen in 4th, 5th and 6th decades. This was followed by adenoid cystic carcinoma which is the most common malignant tumour of minor salivary glands14, however in our series, 80% of these were seen in parotid. There were only five cases of minor salivary tumours in our study, accounting for this discordant finding. Hemangiomas are occasionally seen in the parotid15. In our study, these vascular neoplasms comprised 2% all parotid tumours.
Six cases of lipoma (including one case of angiolipoma) were seen in our study. Literature review reveals that these are rare neoplasms of parotid, however occasional cases have been reported in the submandibular gland16,17. Schwannoma presenting as primary salivary gland neoplasm is a recognized entity18. These are thought to arise from the radicals of facial nerve. We observed four cases of Schwannoma, all affecting parotid gland.
Malignant lymphomas of the salivary glands may either be a primary process or a secondary involvement by extraglandular diseases14. The incidence of primary lymphoma of the salivary glands ranges from 0.6 to 2.4%19,20. In our study, there were four cases of non-Hodgkin’s lymphoma and one case of Hodgkin’s disease. As this was a retrospective analysis, the primary or secondary nature of these neoplasms could not be determined.
Plemorphic adenoma was the most common benign salivary gland tumour and mucoepidermoid carcinoma was the most frequent malignant neoplasm. Parotid gland was the most common site of origin in both benign and malignant tumours. The overall relative frequency of salivary gland tumours in this series correlates with that reported in the international literature.