Cryptococcus neoformans is encapsulated yeast, which is highly prevalent in the soil. animals and as a colonist in humans1. The most important event involved in host defense against Cryptococcus neoformans is the development of an adequate cell-mediated immune response2 particularly T cell mediated immunity3. The level of immunity caq cause the spectrum to vary from mere colonization of the respiratory tract to serious meningitic or disseminated forms of illness4. However, human cryptococcal disease is generally encountered in patients with leukemia. Hodgkin’s disease or non-Hodgkin’s lymphoma, in those receiving prolonged steroid therapy, or in people who have Acquired Immunodeflciency Syndrome. Although the immune status is an important factor in determining the degree of infection. reports have shown that 50% of patients do not have any recognizable antecedent or concomitant immunodefic iency5,6.
We came across two unusual cases. In the first case marked eosinophilia was noted. The second patient had cryptococcal infection in the breast.

Case 1
A 16-year-old female student presented with a history of pyrexia and cough for eight months. The fever was low grade, occurred in the evenings and was not associated with rigors. She occasionally produced yellow sputum. There was no history of dyspnea.
Auscultation revealed coarse crackles bilaterally. Her chest X-ray showed diffuse bilateral interstitial infiltrates with honey comb pattern. An ultrasound of the abdomen showed hepatosplenomegak. Her hemoglobin level was 9.8 gm/dl, total leukocyte count was 21,000 and the peripheral blood smear showed 50% eosinophils, 27% neutrophils and 21% lymphocytes. A bone marrow aspirate and trephine revealed normal hemopoietic precursor cells, erythropoiesis was normoblastic and myelopoiesis showed increase in the eosinophilic precursors which comprised about 40-45% of the total nucleated cells in the bone marrow. No evidence of parasitic infection was found on stool examination. Empirical treatment with mebendazol for three days did not result in any improvement in eosinophilia. Her sputum AFB smear was negative. ANA, ASMA and AMA were negative .On the basis of her clinical presentation she was started on anti tuberculosis therapy. Her condition worsened over the next month with her temperature increasing to 101-1020 F and she developed hemoptvsis. She had also developed an acneform, umblicated pustular rash on her face similar to Molluscum contagiosum (Figure 1). 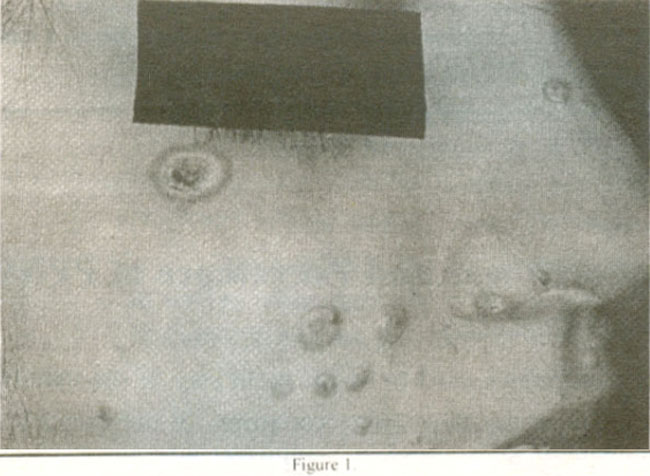 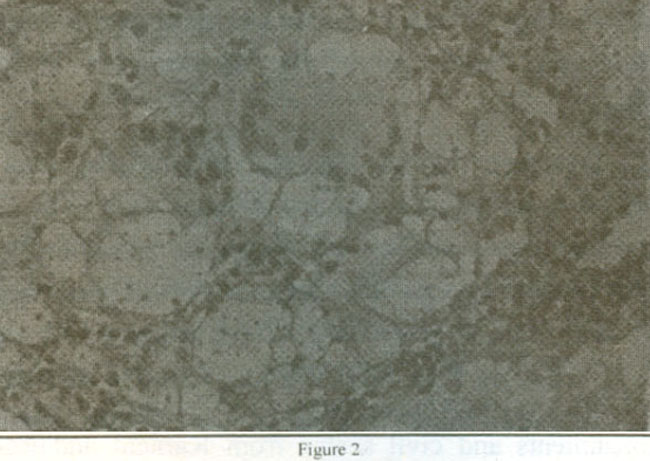 She was started on amphotericin and was discharged in improved status.
Case 2
A 45-year-old diabetic housewife presented with fever, history of weight loss and enlarging subcutaneous masses over various parts of her body since the past six months. These masses were of varying size and the largest swelling was present in the upper outer quadrant of the left breast. This lump was firm, well defined, non- tender and about 3 cm in diameter. The overlying skin was normal. There was no discharge from her nipple. This lump was associated with a soil left axillary lymph node about 5 cm in diameter. Due to this firm breast mass and associated subcutaneous nodular eruptions, carcinoma of the breast with metastasis was suspected. A mammograph could not he done because of financial constraints and paucity of facilities. A fine needle biopsy of this lump and of another lump in the thigh was performed. Cryptococci were seen with collections of histiocytes and multinucleated giant cells. Presence of typical periodic acid- Schiff yeasts led to the diagnosis of cryptoccocal infection.
Treatment with Intravenous Amphotercin for initial two weeks resulted in significant reduction in size of the swellings. Subsequently she was switched to Fluconazole 400 mg, which was administered for eleven weeks. All of her masses disappeared except a scarred single left axillary lymph node. Follow up over last three years has not shown any sign of relapse.

The presentation in both of these cases was distinctive. The unique facet of the first case was that cryptococcal disease and eosinophilia were a consistent finding. The serial absolute eosinophil count was above 1.5x109/liter which qualified this case as hypereosinophilia7. Eosinophilia to this extent is usually found in parasitic infections, allergic disorders, vasculitides and lymphoreticular malignancies8. Fungal infections in which peripheral eosinophilia has been documented are coccidioidomycosis, especially in disseminated infection9 and in allergic bronchopulmonary aspergillosis10. The apartment building where the first patient grew up was at one time inhabited with wild pigeons. A visit to her house by one of the authors with a team of physicians and a microbiologist did not reveal any source of fungal growth. Cultures taken from the soil of the dormitory where she had been staying for previous two years also did not show any Cryptococc i. Cry ptococcal infection is usually associated with a slight neutrophilic leukocytosis in the peripheral blood and chronic meningitis in the CSF11. This case as well as others written in the same context revises the need to include cryptococcal infection in the differential diagnosis of peripheral eosinophilia.
In the second case the patient presented with a breast lesion. The most common fungal infection of the breast is Candida albicans, which usually occurs in women after childbirth12,13. Cryptococcal infection of the breast is a rare but treatable condition that may occur in both normal and immunocompromised hosts and may mimic other more common forms of breast disease, including carcinoma of the breast14 In this case we suspected carcinoma of the breast and performed a fine needle biopsy that proved to be diagnostic. The rote for surgery alone is questionable and it is advised that surgery should be combined with systemic antifungal even if there is no documented infection outside the breast14.
We conclude that presence of eosinophilia should not distract us from considering Cryptococcus in the differential diagnosis. This fungus should be included in list of causes of breast lump.