Survey of Knowledge About Tuberculosis Amongst Family Physicians

Objective: To investigate the knowledge, attitudes and practices pertaining to tuberculosis (TB) amongst family physicians.
Method: A questionnaire-based study in which 150 family physicians were interviewed.
Results: Of the family physicians 21.3% considered that TB is not a serious problem; 29% did not advise BCG vaccination as they considered that BCG vaccination has adverse side effects and limited usefulness. Only 38% depended on sputum analysis for diagnosis and 39% were prescribing four drug regimen for newly diagnosed TB patients. Majority of family physicians were prescribing the drugs that are classified currently as non-recommendable. Only 7.3% were able to write down the correct contents and quantity of tablets of what they were prescribing. ­
Conclusion: There are many misunderstandings about the transmission of tuberculosis and BCG vaccinations. Method of diagnosis, treatment and monitoring of treatment by and large is not satisfactory (JPMA 51:333,2001).

Tuberculosis is a serious health problem in Pakistan. In a country with 130 million population, approximately 1.5 million people suffer from tuberculosis and more than 2 10,000 new cases occur each year. In fact, only one in four or five new cases are ever diagnosed1.
1.75°/o of patients are in their productive years i.e., 15-59 years2.
2.In the next 10 years it is estimated that 4.2 million people will develop TB and 50% will be infected with multi-drug resistant TB bacilli. The cure rates at present in Pakistan are just 20%.
Family physicians are the backbone of any health care system, as they are dealing with a malor bulk of the patients. To find out their attitudes about TB. a questionnaire-based study was designed. 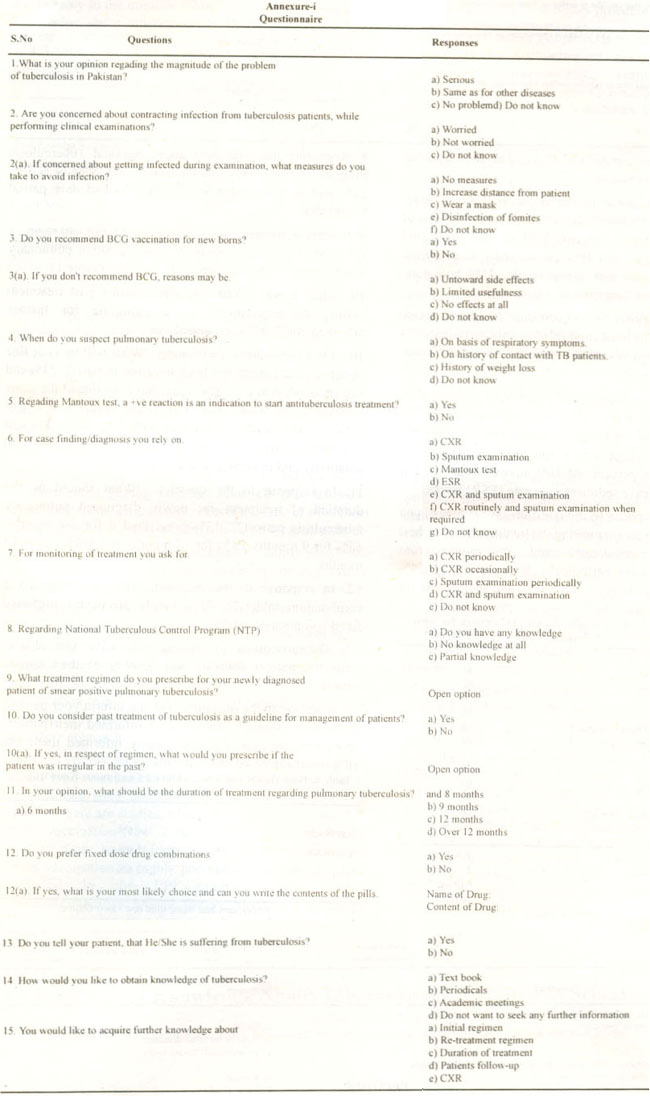 were designed comprising general aspects of the disease, method of diagnosis, monitoring and treatment of tuberculosis. This was an observational survey of family physicians to assess their knowledge. attitudes and practice about tuberculosis.
The study included those family physicians that had no postgraduate qualification and were treating at least 7-10 tuberculosis patients per month. The year of their graduation was not considered.
This study was carried out in Karachi. which is the largest city of Pakistan. For administrative purposes, Karachi is divided into five districts.
The quota for surveyor had been divided in advance and was of 30 family physicians at each district (Stratum). As such total sample size came out as 150 units. The surveyors had chosen family physicians at random.

1.In answer to the question about the “Magnitude of the problem of tuberculosis”, 77% rightly considered it a serious problem. while 20% considered it at par with other diseases, 1.3% considered that it was not a problem and 1 .3% did not answer the question.
2.In response to the question, ‘Are you concerned about getting infected from a tuberculous patient?”, 53.3% were worried, 41.3% were not worried and 5.3% did not reply.
2a.The reply to a subsequent question about “What protective measures do you adopt while examining tuberculosis patients?”, 39% wore a mask, 26% increased their distance from patients, 21% opened the windows for cross ventilation. 21% used disinfectants. 21% did not take any protective measures and 39/s did not know what to do. 1 7% adopted more than one protective measure.
3.In answer to the question. “Do you advise BCG vaccination?”, fort\\\\ four (29%) did not advise BCG vaccination.
3a.On subsequent questioning. “Why do you not advise BCG vaccination?”. 1 8 (40.9%) considered it as having limited effectivity, 2 (4.5%) considered it is having no effect at all,12 (27.3%) did not advocate it because of its side effects and 12 (27.3%) had no reasons for not advising BCG vaccination.
4.In response to the question. “When do you suspect pulmonary’ tuberculosis?"55% suspected it on the basis of respiratory symptoms. 36% on the basis of history and weight loss and 19% considered it in every case as many patients are non symptomatic. 35% had more than one choice for suspicion of tuberculosis.
5.In response to the question, “Whether a positive Mantoux Test is an indication to start antituberculous drugs?”, 21% responded es. 50% responded no and 29% did not answer the question.
6.For the diagnosis of pulmonary tuberculosis. 15% relied on chest x-ray, 21% on sputum analysis for AFB, 17% requested both chest x-ray and sputum analysis. while 16% advised chest x-rays routinely and sputum as required. Fourteen percent and 16% advised Mantoux Test (MU) and Ervthrocvte sedimentation rate (ESR) respectively.
7.In response to the question “What investigations do you perform for monitoring the treatment?” 33% requested chest x-ray periodically and 8% occasionally. sputum examination periodically is requested by 21% and 24% depended both on chest x-ray and sputum analysis while 1% did not know how to monitor their patients.
8.Regarding the awareness about National Tuberculosis Program (N.T.P.). 19% had adequate knowledge of N.T.P.. 29% had no knowledge at all and 52% had only partial knowledge.
9.In reply to the question. “What is your treatment regimen for newly diagnosed patient of smear positive pulmonary tuberculosis?”. The answers were multiple (Table 1). 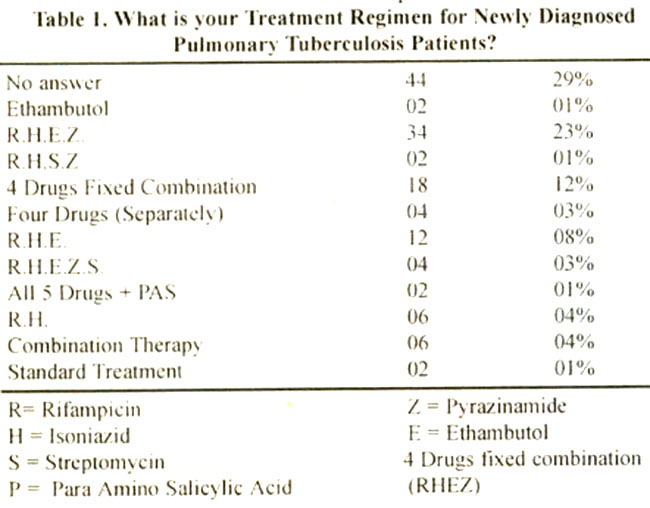 10.When it was asked “Do vou consider past treatment history of tuberculosis as a guideline for further management?”, 91% responded yes.
10a.On a subsequent questioning. “What will be your line of action. if a patient has been irregular in past?”, 51% did not know what to do. 28% would have continued the same treatment, 3% would start five drugs regimen. 6% will supervise the treatment and start with four drugs, 3% will add steroids and 1.5% will advise for AFB culture and sensitivity and referral to a specialist.
11.In response to the question. “What should be the duration of treatment for newly diagnosed pulmonary tuberculosis patient?”. 13% prescribed it for 6-8 months, 63% for 9 months. 21% for 12 months and 3% for over 12 months.
12.In response to the question. “~)o you prefer fixed combination tablets?”, 73% famik physicians preferred fixed combination tablets.
12a.On subsequent questioning only 7.3% were able to write the correct contents and quantity of their chosen tablets.
13.In answer to the question. ‘Do you inform your patients about their disease?”. 89% always informed their patients about their disease. 1% occasionally informed them and 10% never informed their patients.
14.In reply to the question ‘Would you like to update your knowledge about tuberculosis?”. 98.6% are interested in getting continuous update regarding tuberculosis.

Table 2 and 3 show sources of acquisition and required areas of information.

Tuberculosis is a serious problem in Pakistan: 1.5 million people suffer from TB: 2.5 out of every 1000 develop TB annually1.
In spite of the serious problem of TB in the country. 23% of family physicians did not consider it serious, as such they may have a very casual approach towards lB patients and their attitude may hamper efforts for control of TB or casual attitude.
Forty seven percent of family physicians were not worried about getting infected from TB patients while examining them. This clearly reflects the lack of awareness about the infectiousness of tuberculosis or a casual attitude.
Protective measures adopted by family physicians were mostly non-specific like increasing the distance or wearing a mask. This attitude shows that patient and their family members are given unnecessary instructions3.
BCG (Bacille Calmette Guerin) is included in EPI (Expanded Program of Immunization) started in collaboration with WHO and UNICEF in 1979. According to EPI, BCG is given at the time of birth. The purpose to ask the question regarding BCG was to estimate that how much importance is given by fi’mily physician toward vaccination and their approach.
Twenty nine percent of family physicians did not advise BCG vaccination. The reasons for not advising BCG vaccinations were limited usefulness and untoward side effects. There are studies, which show limited usefulness of BCG vaccination4. but it is clear that BCG vaccination protects from serious forms of TB5. WHO recommends mass vaccination in highly prevalent areas6 and it is thus included in the EPI program. This reflects misunderstandings among family physicians regarding BCG vaccination in relatioiì to untoward reaction and limited usefulness. It is highly probable that many children seen during a normal post vaccination course with transient erosions, ulcer. pustules and/or lymph node swelling have been diagnosed as having untoward reaction and accordingly . treated unnecessarily. Training in differentiation between the normal post vaccination course and genuine reaction is believed to be mandatory for family physicians7.
The index of suspicion of TB is high amongst family physicians. They suspect TB on the basis of respiratory symptoms (55%). history of contact with TB patients (36%) and history of weight loss (41%), while 34.6% suspect TB on more than one presentation.
Recommended standard for diagnosis of pulmonary TB is by sputum microscopy for A.F.B. (Acid Fast Bacilli). In our survey, only 38% of family physicians were depending on sputum analysis routinely, which is a basic test for bacteriological confirmation9. Still 30% of family physicians are starting antituberculous drugs on the basis of ESR (Erythrocvte Sedimentation Rate) and MT (Mantoux Test), 1 5% would rely on chest x-ray for diagnosis. Chest x-ray can undoubtedly be very helpful in localizing abnormalities in the lungs but to establish the TB etiology, further examination is necessary and only bacterioIogy can provide final proof. No radiological picture or pattern is absolutely typical of TB, many diseases of’ lung show a similar picture and on the other hand pulmonary TB can take almost any form on radiology8. It can be concluded that false positive diagnosis is high in routine clinical practice and large number of patients might be receiving antituberculous treatment unnecessarily.
For monitoring the treatment response the standard method recommended is sputum microscopy9. but only 48% were depending upon sputum analysis. 52% were adopting the method by which they can mismanage their patients and as they are not requesting sputum therefore they can easily miss drug resistant cases.
For newly diagnosed virgin cases of pulmonary TB. recommended regimen is four drugs in the initial intensive phase. In our surve\\\\ only 39% of family physicians were prescribing regimen of four drugs combination, to their newly diagnosed cases of pulmonary TB. This includes 12% family physicians who were prescribing tablets having four drugs fixed combination. although WHO had issued clear instructions that tablets having fixed combinations ofthrec or more drugs should be studied for their bioavailabilitv in local population before recommending wide scale use10. Till now the bioavailabilitv of tablets containing fixed drugs combination has not been confirmed by well-controlled clinical studies. Prescriptions by majority of family physicians can be classified currently as non-recommendable either due to too many combinations or due to inadequate combination.
Twenty four percent of family physicians were prescribing the drugs for more than 9 months. According to the national guidelines, duration of treatment is 8 months for pulmonary TB11. Increasing the duration definitely increases the burden on health resources.
Ninety one percent of family physicians considered past treatment history as an important guideline for further management. but only 3% added new drugs in their existing regimen. While national guidelines emphasize on five drugs in initial intensive phase of category II patients, this reflects poor awareness regarding management of the default cases.
Only 19% of family physicians have adequate knowledge of National Tuberculosis Control Program11 and it can be concluded that with this poor awareness it is impossible that the existing TB Control Program will be successful, which is becoming more doubtful, when we observe that 73% of family physicians prefer tablets with fixed drugs combination. But only 7.3% were able to write down the correct quantity of what they are prescribing.
Ten percent of family physicians never informed their patients regarding their illness and 1% occasionally informed them. This indicates that they may loose compliance of their patients. which is important for cure.of their disease.
This study clearly reveals that many misunderstandings were found amongst family physicians regarding transmission of tuberculosis and BCG vaccination. Method of diagnosis. treatment and monitoring of treatment by large is not satisfactory. The condition can be improved as 98% of family physicians are interested to get continuous update about TB. Knowledge and information can be gained by textbooks, periodicals and academic meetings. Of family physicians 63.5% wanted it through academic meetings. To improve overall knowledge regarding TB amongst family physicians with the aim to get better control over the disease, a continuous program of such meetings should be planned.