Most patients with tuberculosis of the cervical spine present with localized neck pain and constitutional features like malaise, fever, anorexia, loss of body weight and night sweats, as early symptoms followed by long tract signs, with or without sphincter involvement, as the disease progresses. However, occasionally these patients may present with a radicular pain as an early presenting symptom, which can simulate the other pathological conditions of the cervical spine such as spondylosis, cervical disc prolapse, pyogenic cervical osteomyelitis or bone metastases. What is rare is bilateral radiculopathy and we present two such cases of cervical spinal tuberculosis whose initial presentation was bilateral cervical radiculopathy in the absence of myelopathy.

Case 1
A 38 year, right young lady presented with a history of pain over the neck radiating to both upper arms for three months. On examination, she was found to have diminished biceps tendon reflexes bilaterally. There were no long tract signs or sensory and sphincter involvement. On local examination, she had painful restricted cervical movements and tenderness over the back of the neck. She was afebrile. The ESR was raised (38mm in first hour) and other laboratory tests were within normal limits. X-ray of the cervical spine was normal. MRI revealed an anterior extradural collection at C3. C4 and C5 level, which had compressed the spinal cord and adjacent nerve roots (Figure 1). 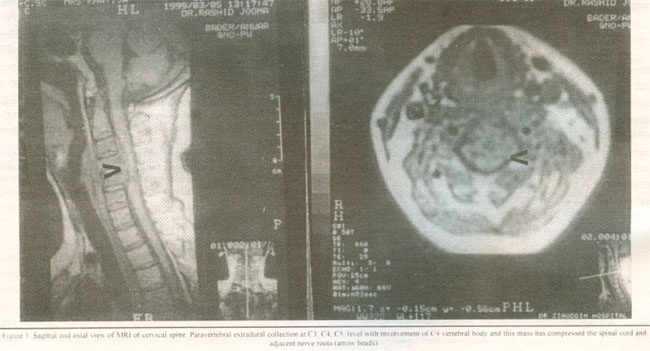 On clinical and radiological grounds. she was diagnosed as tuberculosis of the cervical spine and anti­tuberculous treatment was initiated as a therapeutic trial. Her clinical condition greatly improved within three weeks of commencement of therapy and radicular pains had resolved by the third month of follow up.
Case 2
A 22 year young girl was brought to the hospital with two months history of neck pain, which radiated to both upper limbs. Pain was gradual in onset and there was no history of trauma. On clinical examination, she had bilateral sensory impairment over the C6 and C7 dermatornes. There were no long tract signs with no motor and sphincter involvement or hyperfiexia.
Only abnormal laboratory finding was raised ESR (42mm in first hour). Chest and cervical spine x-rays were normal. MRI of cervical spine showed paravertebral mass at C55-C7 level compressing the spinal cord anteriorly and the findings were consistent with tuberculosis of cervical spine.
She was treated with anti-tuberculous drugs. Within two weeks she started feeling beter and by the fourth week pain was greatly diminished. Her last ESR was 18mm in the first hour. suggesting that the disease process was regressing.

Nearly 30 million people in the world have tuberculosis12. Of all the patients, nearly 1-3% have skeletal involvement and about 50% of these have vertebral tuberculosis1-4. Tuberculosis affects the dorsal vertebrae in 50%, lumbar in 35% and cervical in 15% of the cases5-7. This spinal affection can occur at any age and affects both sexes equally. However, in developing countries it is still a disease of young adults1,2,8,9. Spinal tuberculosis is always secondary to a primary focus elsewhere in the body and occurs due to haematogenous spread. Tuberculosis of the spine most commonly involves the vertebral bodies and disc and only occasionally are the posterior elements involved1,2,10-12. Cord and nerve root compression may develop secondary to epidural tuberculous abscess formation, development of granulation tissue, or the destruction and collapse of a vertebral body with deformity and instability.
Majority of patients having tuberculosis of cervical spine present with gradual onset of fever, malaise, night sweats, weight loss and neck pain as early symptoms followed by gradual deterioration of neurological status due to spinal cord compression1,11-13.
However, the two cases reported here presented with pain and bilateral radiculopathy. This unusual clinical presentation was most probably because of early involvement of the nerve roots by the epidural tuberculous abscess or granulation tissue. They did not have any long tract sign despite significant cord compression shown on MRI. The tubercular mass causing bilateral nerve roots involvement without producing myelopathy even though MRI has shown anterior cord compression. is difficult to explain. One of the reasons could be the greater canal diameter in the cervical region. In a series of 13 patients with osteomyelitis of cervical spine, Stone and co-workers reported four patients with unilateral radiculopathy as an initial presentation but there was no patient with bilateral presenting symptom without myeolopathic features in radicular pain in their series13. Bilateral radiculopathy as a tuberculosis of cervical spine is unsual and has not been reported in the English language literature.
The diagnosis of tuberculosis of the cervical spine can be established by its radiological, microbiological. histological features or a therapeutic trial of anti­tuberculous medications. Chemotherapy is now established as the primary treatment for majority of the patients with spinal tuberculosis and must be continued for at least 12 months5,8,14,15. Due to efficacy of anti-tubercular drugs, surgery is not required in most of the cases. Indications for the surgery include non-response to drugs, uncertainty in diagnosis and neurological deterioration1,2,13,14 .
In these two reported cases, provisional diagnosis was made on MRI findings and the final diagnosis was established after observing the good response to a therapeutic trial of anti-tubercular drugs.
Though unusual, bilateral radiculopathy may be the first clinical presentation of cervical spine tuberculous, without long tract signs and should be differentiated from other pathologies of cervical spine such as herniated cervical disc, cervical spondylosis, pyogenic cervical osteomyelitis, and metastases.