Ganglioglioma is a slow-growing tumour composed of variably differentiated neuronal cells admixed with neoplastic astrocv (Cs. It accounts for of brain tumours in all age groups and 1.7% of childhood brain tumours. Its occurrence in the spinal cord is appoximately1.1%1,2. Ganglioglioma should be suspected whenever a child presents with a tumour involving a considerable lenght of the spinal cord. It is usually well demarcated from the surrounding normal tissues, which greatly facilitates surgical excision. The majority of the cases are biologically benign, not requiring postoperative chemo or radiotherapy3. Only about 66 cases of intramedullary spinal cord ganglioglioma have been reported uptil now1. We report a case of intramedullary spinal cord ganglioglioma in a 19 year-old male.

A 19 year-old male presented with pain in the lower limbs of 8 months duration. The pain had worsened in intensity during the weeks prior to consultation. During this period, lie also developed numbness and weakness of both legs along with retention of urine and constipation. On examination, he showed diminished sensation over the saddle area and on the posterior and lateral aspects of both legs with paraesthesiae. Both lower limbs had grade one power with diminished tendon reflexes. X-ray of dorsal and lumbar spine was normal. MRI spine showed a cystic intramedullary mass extending from Dl2 to LI without enlargement of the spinal cord. The mass enhanced rnoderately after gadolinium injection. At operation the cyst was evacuated, followed by complete but piecemeal excision of the solid portion of the tumour. Postoperatively the patient’s neurological state improved. Power in the legs recovered to grade 3. Pain and paraesthesiae disappeared but numbness of the saddle area and sphincter dysfunction remained unchanged 8 weeks after the operation. 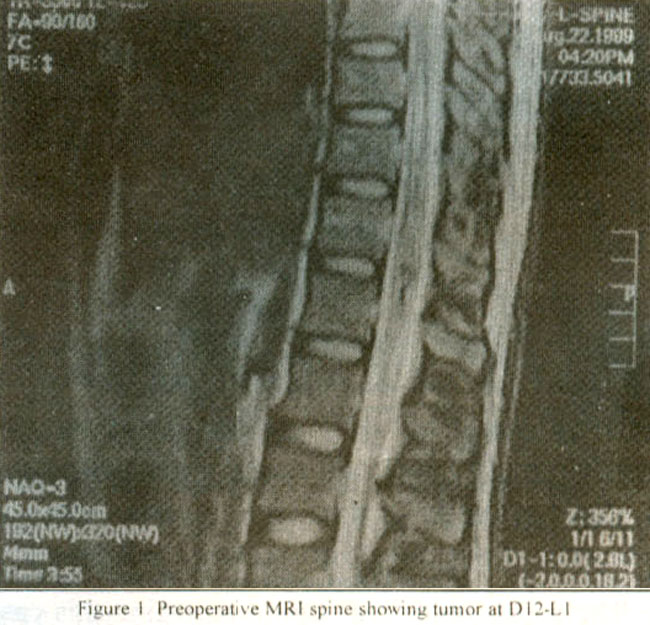 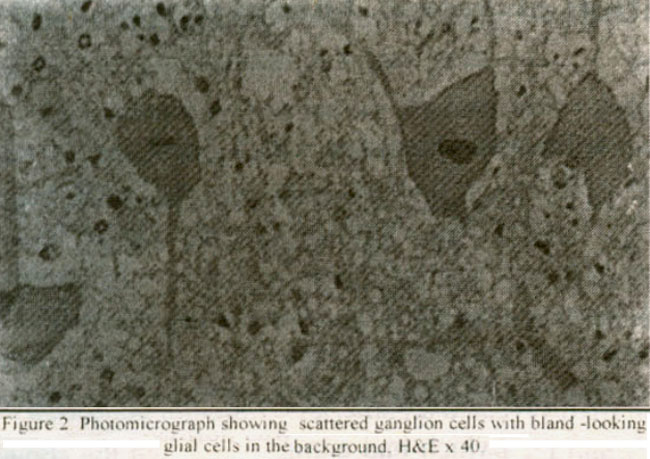 Intramedullary spinal cord tumours are relatively lagre neoplasms accounting for only 4% to 10% of central nervous system tumours and 2% to 4% of CNS glial tumours. In adults intramedullary tumours comprise approximately 20% of all intraspinal neoplasms. while in children at least 35% of the spinal tuniours are intramedullary4 whereas tumours containing adult neurons are not uncommon in the autonomic nervous system, their occurrence in the CNS is exceptional. Most of the cases reported have occurred in children and y’oung adults (age range: 2.5 to 80 vears. mean age: 19 years, male to female ratio: 3:2)1. Their preferred locations have been in the floor of the third ventricle. hypothalamus and the temporal lobe. Pick and Bielschowskv in 1911 described the first case of spinal cord ganglioneuroma which was later reclassified as a ganglioglioma2. Since then only’ about 66 cases of spinal cord ganglioglioma have been reported1.
Once regarded as a hamartomatous lesion, it is now widely believed that ganglioglioma is a true neoplasm of a relatively benign nature, which probably’ forms as a result of the maturation of tunlours originally composed of primitive neuroblastic cells. Its relatively good demarcation from the surrounding normal tissue allows complete surgical resection. No significant relationship has been noted between the biologic behaviour and histologic parameters of cell density. pleomorphism, vascular proliferation, haemorrhage, meningeal invasion, or necrosis. It has recently been suggested that proliferation markers (e.g. proliferating cell nuclear antigen. Ki-67 etc.) might supplement the histological diagnosis of these tumours and may be useful in predicting the clinical outcome. Malignant transformation is rare and in one series is reported to be about 10%1,2. Whereas the ganglionic component is virtually always benign, it is the glial element which undergoes malignant changes. The latest microsurgical techniques greatly facilitate total removal of the tumour. which is the treatment of choice. Presently postoperative radiotherapy is not believed to play any role in the management of completely resected gangliogliornas. Only in those tumours that show anaplastic features or a high proliferation index, should radiotherapy be considered. As a result of their favourable prognosis. correct diagnosis is important to avoid progressive neurological deficit and unnecessarily aggressive thcrapy.