Parasitic diseases generally present a major health problem especially in developing countries. However, the human urogenitial tract is commonly infested by a few species of parasites. One of them is schistosoma haematobium, not found in Pakistan is a digenetic blood fluke causing severe and varied urinary tract pathology. Evaluation of such pathology warrants careful history taking, eliciting patient’s geographic origin or his exposure in an area endemic for a particular parasite. 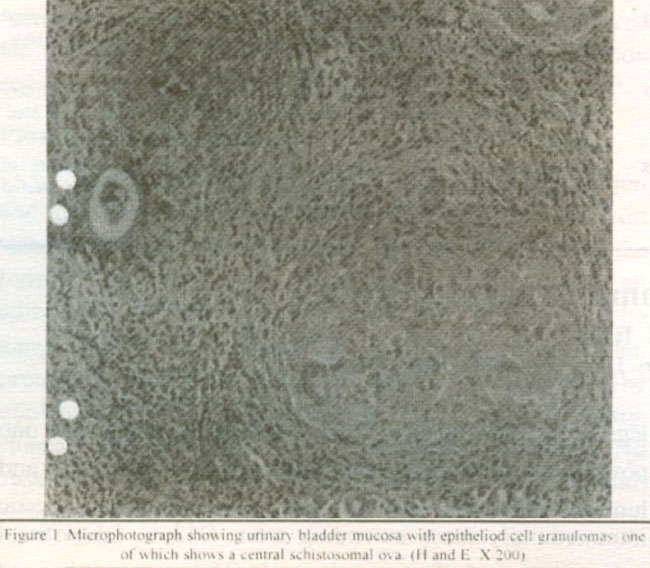 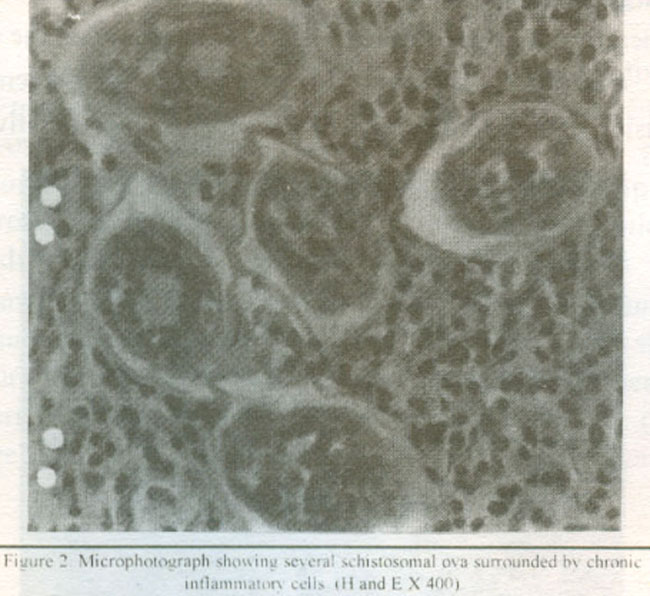 Patient was given tab. Paraziquental as 40 mg/kg single dose therapy.

The prime objective behind reporting this case is to highlight the importance of epidemiology in clinical practice.
Urinary schistosomiasis is caused by schistosoma haematobiuni which dwell as pairs principally in perivesical venous plexus in humans. It is highly prevalent in Middle East and along the river Nile for millennia. Its existence in Egypt dates back to 1900BC. It is so dense in Egypt that in the past haematuria in young boys was taken as menarche in the counterpart. However it was in late I 800s that a German pathologist Theodore Bilharz first described worm pairs in mesenteric veins at autopsy1. It is learnt that a good.understanding of its natural history is essential for the management of urinary schistosoni iasis.
Humans, the definitive host for schistosomes. are infected when the free swimming fork-tailed cercariae penetrate the skin. They differenriate to larvae (schistosomula), enter the blood and are carried via the veins into arterial circulation. Those that enter the superior mesenteric artery pass into the portal circulation and enter the liver, where they mature into adult flukes. Schistosoma mansoni and japoncium adults migrate against the portal flow to reside in the niesenteric venules. Schistosoma Haematobium adults reach the bladder veins through the venous plexus between the rectum and bladder. In their detinitive venous site, female fertilized eggs, which are excreted through urine or faeces and must enter fresh water to hatch. Once hatched, ciliated Larvae (miracidia) penetrate their intermediate host, snails, undergoing further development and multiplication to produce cercariae2. Since oviposition (egg laying) follows a diurnal pattern, being maximum between 1000 and 1400 hours, a mid day urine sample is most likely to contain eggs in urinary schistosorniasis3.
The sequelae and complications of schistosoma haematobium infection in humans, result from interaction of intensity, duration, activity and focalilv of infection4. It is certainly related to tile site of oviposition as well. Prostatic oviposition is low and frequently associated with significant prostatitis. Often heavy egg burden is seen in seminal vesical. resulting in asymptomatic haematospermia. ia. ovispermia and even though rarely infertility in men. In females it may present as asyniptomatic cerviciitis and vaginitis.
Schistosomal disease of urinary bladder includes a spectrum of problems like schistosomal polyposis.contracted bladder, schistosornal ulceration. urothelial hyperplasia,metaplasia. dvsplasia and bilharzial bladder cancer syndrome. This cancer syndrome manifests with an early onset (40-50 years of age) and a high frequency of squamous cell carcinoma (60% - 909%) and adenocarcinoma (5% - 1 5%)5, The most common and ominous sinister of urinary schistosomiasis results from ureteric involvement This primarily leads to h\\\\droureter which can be segmental in25%. tonic in 25-30% and a tonic in 35% of schistosomal obstructive uropathy. (SOU)6. It is worth appreciating that hydroureter precedes hvdronephrosis. whereas the latcer serves as final stage of sequelae. In patients with severe disease or nonfunctioning kidneys secondary to SOU. mortality may reach up to 50% in 2 to 5 years7.
As reversibility declines with stage progression. schistosomacidal medication should be instituted as soon as possible. Of the pathogenic species of schistosome, S. haematobiuni is most ameanable to schistosomacidal chemotherapy. It is fairly sensitive to metrifonate (Bilharcil). Paraziquental (Bi Itricide) and to niridazole (ambilhar)8.
Surgical intervention is reserved generally for complications not amenable to medical management or in situations where immediate intervention is mandatory.
Primary prevention is avoidance of contact with water harboring S. haematobium afflicted snails. To date no prophylactic antishistosomal drug is discovered.