Objective: Bilary stenting with endoprosthesis is a palliative prodedure to relieve malignant biliary obstruction. Percutaneous transhepatic technique has been employed whenever endoscopic technique was not possible or had fialed.
Setting: Angiography intervention suite, department of radiology, Aga Khan University hospital, Karachi.
Methods: We present retrospective analysis of 17 patients with malignant jaundice who were treated with percutaneous techniques after the endoscopic route had failed.
Results: The success rate was 94% with placement of single plastic stent in 14 patients, double stents in 3 patients and self-expandable stent in one patient. The overall complication rate was 41% including sepsis, liver abscess, biloma formation, biliary leakage and stent occlusion. There was one procedure related death due to severe sepsis.
Conclusion: Percutaneous transhepatic biliary stenting is an alternative procedure to relieve malignant biliary obstruction with high complication rate and should be has failed (JPMA 51 :308,2001).

Percutaneous cholangiographv was developed originally around 1952 and made safer and more successful by the development of the skinny (Chiba) needle in the early 1970s1 These techniques were developed further into percutaneous biliary drainage by catheter or tube in the mid 1970s1. Malignant   jaundice whether due to cholandocarcinoma. carcinoma head of pancreas or metastatic spread to liver from remote cancer is a common problem. Only a small iiumber of patients with malignant biliarv obstruction are suitable for radical surgery2. For the remainder effective palliation is necessary because obstructive biliary system can lower the quality of life, causes pruritis and predisposes the patient to cholangitis. nutritional disturbances and progressive liver failure. ERCP is preferred method for biliarv stenting in these patients and when this fails either percutaneous transhepatic biliary stenting or eudoscopic plus percutaneous transhepatic (combined technique) may be tried3,4.
Around 10-15% of patients were not suitable for endoscopic treatment. These patients were then managed by a percutaneous approach. The combined procedure was developed for these cases5. In this technique, the stricture is crossed percutaneously through a 6 French track. A guide reserved for selected patients in whom endoscopic route wire is then passed through into the duodenum and picked up using an endoscope. It is then possible to proceed endoscopicallv. The success rate of the technique is close to 100%4 and the complication rate is low6,7.
The most important recent development is the manufacture of expandable metallic stents. These devices can be introduced via a 7 French track and expand up to 1cm diameter. They may also be placed endoscopically. The time to occlusion of these stents is a little longer than plastic stents8. The cost remains the major disadvantage, with average price around 1000 US dollars for the metal stent.
This study reports our experience of percutaneous transhepatic biliary stenting in malignant biliary strictures.

This retrospective study conducted during the period of 1996-1999 includes 17 patients with 6 males and 11 females. Age range was 20-90 years with mean age of 61 years. Obstructive jaundice was present in all patients. Total bilirubin ranged from 5.0-23.0mg% with mean of 15.5mg%. Pruritis was present in 9 patients and 2 patients had associated cholangitis. All patients had inoperable malignant biliary obstruction. The causes are given in table 1.

The stricture was proximal or hilar in 8 (47%). mid CBD in 2 (12%) and distal CBD in 7 (41%) patients. The diagnosis of malignancy was made on radiological and histological grounds. Endoscopic stentings were attempted in all these patients and failed. Procedure was done by percutaneous transhepatic approach alone in 14 patients and with combined approach in 3 patients. We used plastic stems of different caliber i.e. 7F. 8.5F, 10F and 12F and metallic wallstent in one patient. Double mushroom stents were also placed in 4 patients. Double stents were placed in 3 patients.
Technique
Baseline liver function tests were done prior to procedure. Patients were kept on fasting for 6 hours before the procedure. All patients received prophylactic intravenous antibiotics. Sedation and parenteral analgesia were required in most patients due to pain. A routine anticoagulant profile including prothronibin time, activated partial tliromboplastin time and platelets counts were routinely done before the procedure. The results should be within normal range and corrected with fresh frozen plasma and platelets aggi egate.
All percutaneous transhepatic biliarv stenting. procedures were performed under sonographic and fluoroscopic guidance. After taking all aseptic measures percutaneous cholangiogram was performed and a suitable duct, either right or left was selected for puncture. If the stricture was at the hilum. the duct draining the largest hepatic segment either right or left lobe was chosen. The selected duct was punctured with 1 8G needle and a guide wire was passed. In five patients two staged procedure was done. An external drainage was performed first followed by stenting after 3-5 days. In others. stricwre negotiated with the w ire and advanced into fourth part of duodenum at the initial stage. Some very tight strictures required balloon dilatation before stenting. Stents were passed through a sheath. For combined procedure. the guide wire was retrieved with the help of endoscope and the stem was placed by peroral route over the wire (Figure 1). 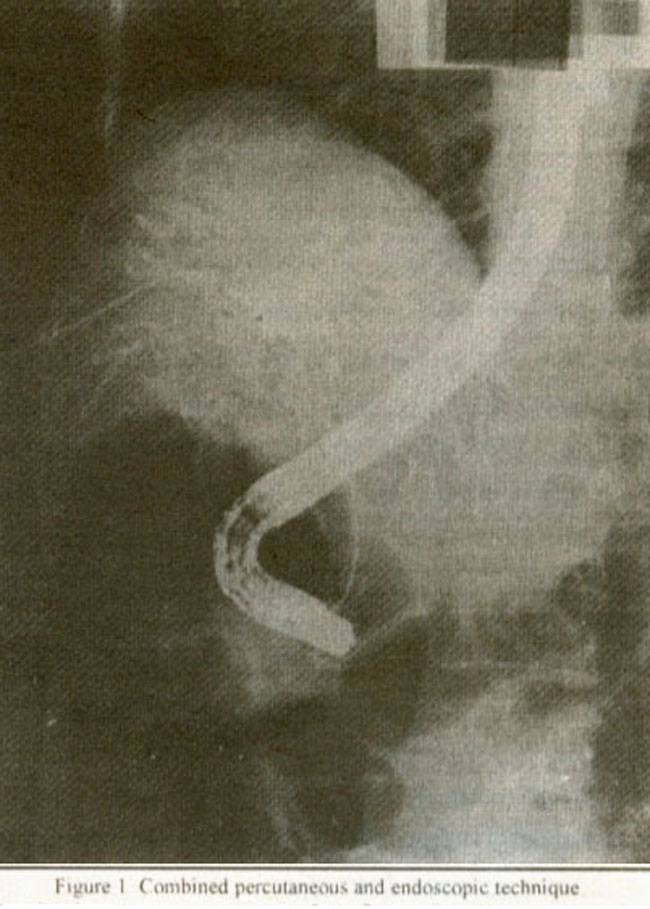 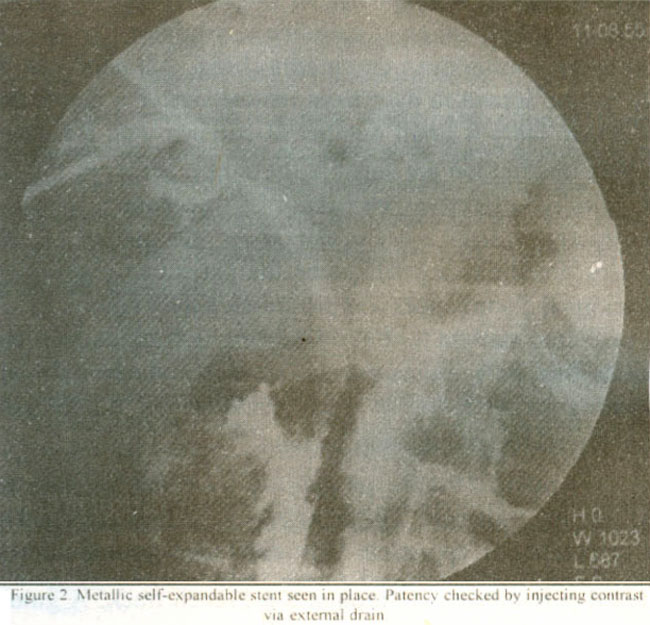 If any blockage was found. attempts were made to reopen the stent by flushing or passing a wire. Failing this a second stent was placed alongside the first one (Figure 3). 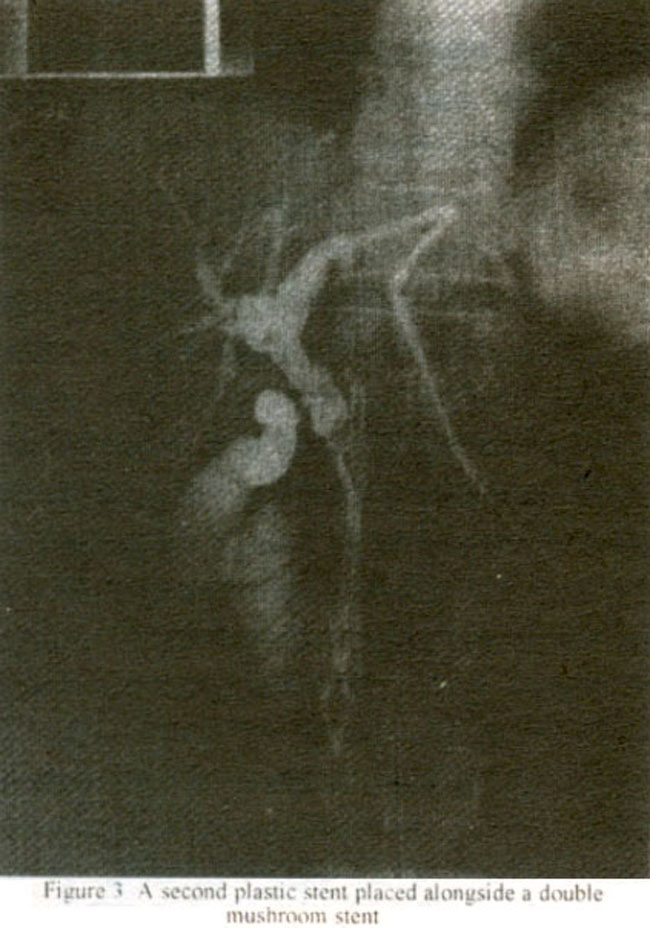 The external drain tube was removed at the end. Patient stayed in the hospital for atleast 3 days after the procedure and was later followed in out patient clinics. Hospital stay was prolonged in patients who developed complications. Serial liver function tests were done at 2-3 weeks intervals.

A total of 1 7 patients were included in this study.
In almost all the cases, the patient’s general condition improved and pruritis and jaundice reduced. Serum bilirubin levels were also reduced to more than 50% within 2 weeks in all the live patients. Procedure was successful in 16 out of 17 patients (94%). In one patient the procedure failed due to difficulty in passing guide wire through the stricture and therefore only external drainage was placed. Patient’s survival time ranged from 4 days to more than one vear with mean survival time of 67 days. Two patients remained alive longer than one vear the survival was also influenced by the patients age and co-morbids e.g. diabetes mellitus, hypertension, renal failure and ischemic heart disease. The survival time was short particularly in these patients. On the other hand, the patients who were young with no other co-morbidity, the complications of procedure were less and survival time longer.
The commonest complication was cholangitis observed in 6(35%) patients. Out of these three had fever, chills not lasting more than 48hrs and controlled with antibiotics, 2 patients had severe septicemia and one had liver abscess formation following cholangitis. Three (17%) patients had biliary leakage. Out of these one had biliary peritonitis and the other 2 remained asymptomatic with leakage detected incidentally on follow-up ultrasounds. Biloma formation was noted in 2 (11%) patients. Most patients had more than one complication (Table 3). 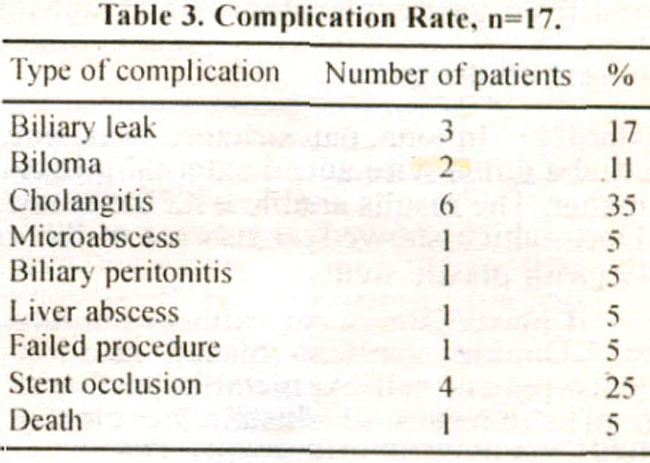 Patients with inoperable tumors causing obstructive jaundice have limited life expectancy but may suffer from distressing symptoms, such as intractable pruritus. interventional techniques for relieving jaundice in pancreatic head carcinoma have been shown to be as effective as surgical bypass9,10. More proximal tumor may be very difficult to palliate surgically without resorting to complex procedures. Endoprosthesis are particularly useful in these patients11.
The aim of treatment for biliary stenting is to keep the biliary ducts patent. The ideal procedure should have a low rate of complications and provide the patients with good quality of life. Transhepatic biliary stenting should be limited to patients in whom curative surgical and palliative endoscopic treatments are not possible since endoscopic stenting is less invasive and therefore has a lower complication rate12. However, transhepatic stenting is associated with fewer complications than palliative surgery13. Furthermore, presence of duodenal diverticula or tight proximal stricture makes endoscopic procedures difficult or impossible. Transhepatic route is preferred in these situations.
Late complications like stent occlusion and displacement have also been reported11-13. Stent occlusion leads to cholangitis14-16. Self-expandable metallic endoprosthesis have been developed during the last few years in the hope of reducing the stent occlusion. In bile ducts, experimental studies with Gianturco and Palmatz stents showed good results without complications. Coon reported good results with Gianturco stents in bile ducts in a series of 30 patients17.
In this study, we reviewed the outcome of percutaneous transhepatic insertion of biliary stents. We included only those patients in which surgery was not possible and endoscopic stenting had failed. These patients were referred from gastroenterologists and surgeons. Most of the patients had advanced disease at the time of stentings. Two had existing cholangitis.
The overall success rate of the procedure was quite satisfactory (94%). In one patient. the stricture was not negotiable by the guide wire and we placed external biliary drainage catheter. The results are comparable with the study by Doctor et al, which showed a technical success of 89% in 49 patients with plastic stents18.
We used plastic stents of different calibers ranging from 7F-12F. Double stents were also placed in three patients. In one patient self-expandable metallic stent was also placed. The chances of stent occlusion are closely related to stent diameter and number of stents. The wider the stent diameter, the lesser the chance of occlusion19. Two stents are less likely to be occluded than one. 12F double mushroom plastic stents remained patent upto 3 months longer than the stents with smaller diameter, which were occluded as early as one week. Expandable metallic stents remained patent for six months. Metallic expandable stents are much better than plastic stents but cost is the major limitatioii20-21.
All patients included in our study had malignant biliary obstruction, carcinoma head of pancreas and cholangiocarcinoma being the most common causes. Overall complications occurred in 7 (41%) patients. The commonest complication was acute cholangitis, which occurred in 6 (35%) patients and was mostly related to stent occlusion. The incidence is relatively high as compared to literature review which showed 14%22. The other common complications were bile leakage and biloma formation in 17% and 11% of patients respectively. One patient developed biliary peritonitis. One patient died from liver abscess. All these complications were diagnosed on ultrasound and CT scan.
The high complication rate may be due to multiple factors e.g, advanced disease, preexisting comorbids. single stage procedure and the use of plastic rather than metal stents. We placed stents at the initial time in most cases without doing preliminary drainage procedure for 4-5 days. This drainage procedure relieves the obstruction and reduces the chances of cholangitis and sepsis, which in turn decreases the mortality and morbidity. We performed biliar drainage procedure in 5 (29%) patients before the stent insertion. The main reason of doing single stage procedure and using plastic stents was to cut down the cost burden to the patient as in many cases patients were non-affording.
Mean survival time was 67 days with range of 4 days to 8 months in 15 patients. Two patients were alive after 1 year. Most of the patients with short survival time also had other niorbidities like diabetes mellitus. renal failure. ischemic heart disease and hypertension. The survival time was higher in young patients with no other co morbidity.
Our results suggest that percutaneous plastic stents can be used safely and effectively in patients who had failed endoscopic stenting and had inoperable malignant biliary stricture. Although the complication rate is high and survival time is low, this procedure can benefit the patients by reducing their problems related to obstructive jaundice, pruritus and nutritional disturbances. The procedure is particularly beneficial in younger patients, those with no other co-morbid and patients requiring chemotherapy.

Predictive Validity of the Medical College Admission Criteria for Academic Performance: Results from the four MBBS batches of Karachi Medical and Dental College

Continuous Quality Assesment; Development of a Simple Computer Based Model for Audit