Hypothalamic hamartomas are congenital malformations: consisting of disorganized, mature, neuronal elements in proportions, similar to that of normal tissue1.
The clinical presentation may include any combination of the following: asymptomatic, precocious puberty, behavioral disturbances and various types of seizures2. The seizure pattern usually consists of laughing (gelastic seizures) beginning in early childhood, quite often in the first year of life. In later years, focal seizures dominate the pattern and often include complex partial seizures. This is finally followed by development of generalized tonic clonic seizures. Atonic seizures may also occur which may be confused with Lennox Gestaut syndrome3.
We present a case of a giant hypothalamic hamartoma which manifested itself with a reversed temporal sequence of epileptic subtypes, i.e. the patient had early onset of atonic seizures, followed by development of generalized tonic clonic seizures, and finally the appearance of laughing attacks typical of gelastic seizures. This report also briefly reviews current concepts of pathogenesis and the surgical options available for the control of epilepsy associated with hypothalamic hamartornas.

Clinical Presentation
This 18 year old male presented with generalized tonic seizures at the age of four years. They were described as episodes in which his whole body would suddenly become stiff. The episodes happened once or twice every week and lasted a few seconds.
Soon after the patient developed atonic seizures, during which his body would become limp and he would lose consciousness. These seizures occcured once or twice a week, and resulted in frequent falls. Both of the seizure types alternated over the next three to four years. The frequency was reduced to about once a month with the use of carbamazapine.
Between eight to ten years of age, his school performance deteriorated and he lagged behind in studies. Soon after, he stopped going to school. I fe also developed behavioral changes at about the same time. His mood become volatile and stubborn. His memory was also impaired.
His father reported that the child had developed enlargement of external genitalia and secondary sexual characteristics at 10 years of age.
At about 12 years, the family noted a new kind of event, during which he would suddenly start laughing inappropriately and would rub his hands over his face. He would remain conscious during these episodes but would not remember them afterwards.
Exam ination of the patient revealed no abnormalities except for mild cognitive impairment.
Investigations
T-1 weighted magnetic resonance scan showed a large iso-intense mass in the supra-sellar cisterns. There was no enhancement with contrast Figure. 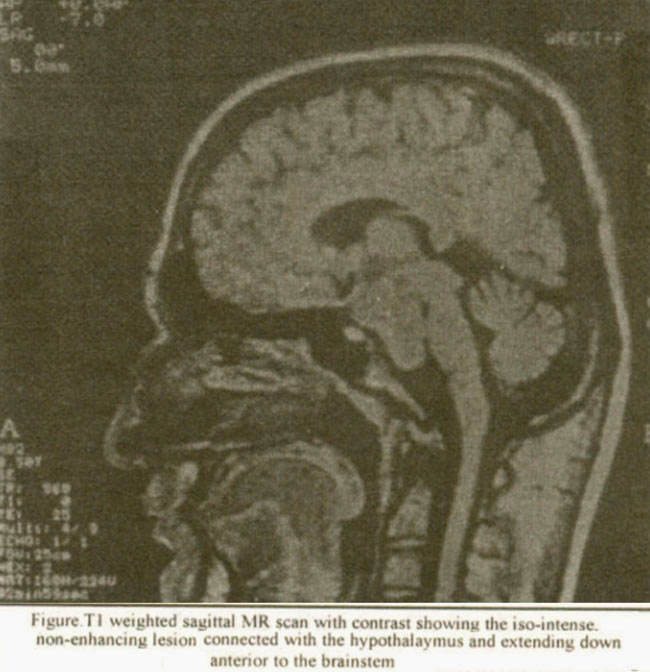 The mass appeared to be exophytic from the hypothalamus and extended down to the clivus. It showed hornogenous high intensity signal on T-2 weighted imaging. The iso-intense non-enhancing appearance on T-l weighted scan and hyperintense signal on T-2 weighted imaging is a characteristic feature of hypothalamic hamartoma. There were no other abnormalities identified on the MR scan.
The EEG showed a 6-7 Hz theta activity. In addition there was a background spike and wave pattern at a frequency of 3 Hz. The EEG was interpreted as a generalized seizure disorder with features of tonic clonic, atonic and absence seizures.
Operative Procedure
With the diagnosis of hypothalamic hamartoma the patient was taken to the operating room. A right temporal craniotomy was performed and the lesion was reached through a subtemporal approach. It was found to be a pale grey, vascular mass. The lesion was only partially resected due to inaccessibility of the lower part and its high vascularity, resulting in difficulty with haemostasis. Closure was uneventful. The definitive pathologic examination revealed hypothalamic hamartoma.
Post-operative Course
The patient woke up well after the operation but had a right 3rd nerve palsy. During the next few days the patient had two episodes of generalized tonic clonic seizures, which were controlled with adjustment of carbamazapine dose and addition of phenobarbitone.
On the first follow-up one week after operation. the patient had no further seizures. He returned home in the northern mountainous rural areas after this follow-up.

Hypothalamic hamartoma are rare congenital brain malformations associated with a novel epileptic syndrome. This syndrome is characterized by gelastic (laughing seizures) usually in the.neonatal period2. This is followed by complex partial seizures after a variable time period. Later, generalized patterns are seen including tonic clonic, atonic and other seizure types associated with slow spike and wave discharge4. The origin of these seizure types was initially thought to be due to associated cortical malformations. This was based on observations of partial complex seizures associated with trauma, vascular malformations and tumors. However, pathological examinations of resected cortical areas regarded as epileptogenic did not show any significant abnormalities5. The current hypothesis postulates that hamartomas are themselves epileptogenic2. This is supported by electrocorticographic abnormalities identified at operation, in vitro epileptogenicity of surgically excised lesions, ictal single photon emission computerized tomographic (SPECT) studies showing hyperperfusion within the lesions themselves and the observation that surgical therapy is rarely successful unless the entire lesion is completely removed6. Intrinsic epileptogenicity is now well established for cortical developmental lesions and is likely to be so for hypothalamic hamartoma as well; evidence for this includes direct ictal EEG recordings from the hamartoma itself. Further support derives from ictal SPECT observations of hyperperfusion of the lesion during seizures6. The mechanism of laughter during gelastic seizures is unknown at present2. It is well known that order hypothalamic lesions such as hemorrhages can provoke laughter. Surface EEG recordings during laughing attacks are usually normal or show only mild dys-synchronization of background activity. However depth electrode data show ictal discharges from the hamartoma itself. Also, laughter can be provoked by stimulation of the lesion. It is therefore hypothesized that laughing seizures originate from the lesion itself. and represent true diencepha I ic epileptic seizures7.
Our patient presented with a reversed temporal sequence of seizure types, i.e., development of generalized seizures at an early age followed by laughing seizures. There was a history of precocious puberty. The patient also had mild cognitive decline.
Many different surgical procedures have been tried for seizure control, and have resulted in variable outcomes5,8,9. These include focal cortical resections including anterior temporal or frontal lobectomy, anterior corpus callosotomy and resection of the hamartoma itself using microsurgical techniques. Cascino et al9 studied 12 patients undergoing surgical therapies for hypothalamic hamartomas. None of the seven patients undergoing focal cortical resections had a significant reduction in seizures. Anterior corpus callosotomy, performed in 2 patients, however, resulted in significant reduction in drop attacks.
Valdueza et al5 studied six patients with hypothalamic hamartoma who underwent microsurgical resection of the hamartoma. Good results were obtained in two patients with a reduction in the frequency of gelastic seizures. They classified the treatment methods into four groups based on topographic and clinical data and concluded that surgical approach was a realistic alternative in certain cases including large and broad based hamartomas associated with cognitive decline and gelastic seizures.
In our case the lesion fits the criteria described above for microsurgical resection and this option was undertaken with a view to complete resection. However, due to its hypervascular nature and extreme difficulty with hemostasis it was decided to abandon resection of the small lower part of the lesion. Unfortunately, long-term follow-up was not available to determine the effectiveness of seizure control.
In conclusion this report highlights the importance of clearly recognition and treatment planning for hypothalamic hamartomas. The various seizure subtypes may not always appear in a predictable sequence and may confound early diagnosis. it is therefore imperative to keep hypothalamic hamartoma in the list of differential diagnosis for all types of generalized epilepsies in young age groups.

Haematocolpos as a Cause of Urinary Retention in the Young Female

Thymic Hyperplasia A cause of repiratory distress