Objective: To study the types of injuries of renal pelvis and ureter following open surgical procedures for urolithiasis and predisposing factors leading to such injuries and discuss various options for the management of iatrogenic injuries of the renal pelvis and ureter.
Patients and Method: Case files and available radiographs of the patients who were managed for ureteral and renal pelvic injuries were reviewed. Initial procedure, mode of injury and clinical course were noted.
Results: The study consisted of 13 patients (9 males and 4 females). Age of the patients ranged from 18 to 65 years. Eight patients had injuries of renal pelvis or ureteropelvic junction and 5 patients got ureteral injuries. Primary management of ureteral and renal pelvic injuries was successful in 9 patients. Four patients required further surgery. Three out of 4 patients underwent nephrectomy and in 1 patient renal function deteriorated despite secondary pyeloplasty. Among 3 patients who had nephrectomy, one died postoperatively due to sepsis and haemorrhage.
Conclusion: Injuries of the renal pelvis and ureter have significant morbidity and even mortality. Peroperative recognition of these injuries and appropriate management can prevent the late sequele of these injuries such as stricture formation leading to progressive renal damage (JPMA 51 :282;2001).

latrogenic injuries of renal pelvis and ureter are not uncommon after open surgery on kidney and ureter. Though ureteral injuries are often attributed to gynaecological, colorectal and laparoscopic procedures1-5, urologists are also responsible for such type of injuries. Strictures of the ureteropelvic junction (UPJ) are common after pyelolithotomy and pyeloplasty6. We report 13 cases of renal pelvic and ureteral inluries following open surgery for urolithiasis, which were managed at our department during last 12 years.

Among the 13 patients there were 9 males and 4 females. Age of the patients ranged from 18 to 65 years. In 8 patients pyelolithotomy was responsible for renal pelvis or ureteropelvic junction (UPJ) injury. In 5 patients with ureteral injuries there was a history of ureterolithotomy in 4 patients and I patient had transection of ureter while mobilizing the lower pole of kidney during pyelolithotomy.
Six patients presented with external urinary fistula, 2 had persistent flank pain following surgery, one had symptoms of uraemia because of obstructive uropathy and one developed frank haematuria postoperatively which was severe enough to end up with nephrectomy. Three patients had an uneventful recovery after the repair of injury. Duration of symptoms was from immediate postoperative period to7 months.
Avulsion of the renal pelvis or UPJ occurred during pyelolithotomy in 7 patients, which was repaired peropereatively. Repair was successful in 3 cases and 4 patients needed further surgery. Three out of these 4 ultimately had nephrectomy. One patient who had undergone pyeloplasty, the renal function gradually deteriorated and dialysis was required.
One patient had transection of ureter which was recognized during operation and successfully repaired by end to end anastomosis over a splint. In 5 subjects no recognizable injury was noted per-operatively. All these 5 presented with external urinary fistula. Residual calculus was excluded by doing plain X-ray abdomen (KUB). Out of these 5 case 2 were managed by double J stenting and one required percutanaeous nephrostomy (PCN). Fistula healed 3 weeks after PCN. In 2 patients open surgery was performed. Excision of damaged ureteral segment and end to end anastomosis with omental wrap was done in one individual and the other had re-implantation of ureter into bladder with psoas hitch.
Overall primary management for ureteral and renal pelvic injuries was successful in 9 out of 13 patients. Four patients needed further surgery. Three of them underwent nephrectorny and in one patient renal function deteriorated despite secondary pyeloplasty. Among 3 patients who had nephrectomy one died postoperatively due to sepsis and haemorrhage. Summary of results is presented in the table. 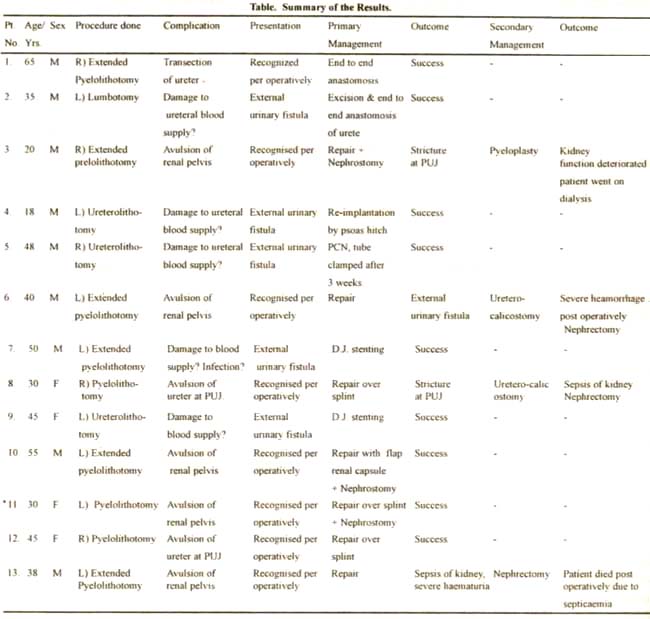 Various types of injuries can be caused to the renal pelvis and ureter during open surgery on kidney and ureter1,2. Common injuries are transection, avulsion, denuding of adventitia. ligation, perforation and crush injuries. Ligation and crush injuries are common in gynaecologica I operations while transection and avulsion follow open urological procedures. Perforation commonly occurs during endourological procedures e.g. ureteroscopy4,7.
Many factors are involved for iatrogenic injuries to ureter and renal pelvis. Size, degree of impaction of stone, duration of impaction. perirenal and periureteral adhesions, neighbouring inflammation and scarring due to previous surgery are contributing factors8. Location of pelvis is also an important factor as intrarenal pelves are more prone to peroperative injuries. Extended dissection in renal sinus up to calyceal necks as described by Gil Vernet in 19659 provides best access for stone in intrarenal pelvis and for staghorn calculi.
Poor surgical technique, excessive mobilizaion, rough dissection and denuding of subadventitial layer of ureter compromising the blood supply of the ureter, all contribute to fistula formation8. As extravasation of urine in perirenal and periureteral space leads to fibrosis10, so watertight closure of renal pelvis and ureter is necessary to avoid this complication. Damage during surgery can be minimized by meticulous surgical technique. Injury if occurs peroperatively should be recognised and repaired over a splint or stent. There should be adequate drainage of perirenal and periureteral space to avoid urinoma formation11, As infection is the single most important factor responsible for local destruction and systemic complications such as septicaemia, should be prevented by appropriate antibiotics.
Various procedures are available to deal with injuries of renal pelvis and ureter. The procedure should be chosen according to the situation. In our series 7 avulsion injuries of renal pelvis were repaired over a splint at the time of surgery. Repair was successful in 3 patients, 3 developed stricture at UPJ and needed further surgery. Pyeloplasty was done in I patient and ureterocalicostomy in two . One patient developed sepsis of kidney after primary repair of pelvis and got severe haematuria. Nephrectomy was done but patient died postoperatively due to septicaemia. Two ureterocalicostomies that were done for stricture at UPJ failed and nephrectomies were done because of haemorrhage and sepsis. In one series of 35 patients there is 8% incidence of nephrectomy12. Smith in 1988 reported 5 ureterocalicostomies for post pyelolithotomy stricture at UPJ, all were successful13. In another study McQuitty et at reported 100% success rate in lower pole ureterocalicostomy for the management of iatrogenic UPJ stricture14. Infection and compromise of blood supply may be the cause of failure in our series.
All five ureteral injuries in our series were managed successfully. Two required less invasive procedures (one had percutanaeous nephrostomy and other Di stenting).The remaining 3 patients underwent surgical repair over a splint. Stenting or splintage of injured ureter, diversion of urine by nephrostomy, adequate drainage of periureteral area and prevention of infection with antibiotics are important factors for the healing of injury and prevent subsequent stricture formation.
Many procedures are available to the Urologist for the management of ureteral stricture4,15,16. Presently first endoscopic and percutanaeous procedures are tried. In a large series of endoscopic balloon dilatation of ureteral stricture in 44 patients, the success rate was 48 per cent17. In review of literature by Kramolowsky and associates18 it was noted that success rate varied widely with respect to various endourological techniques.
Definitive procedures available for upper ureteral and UPJ injuries are pyeloplasty; Davis intubated pyeloplasty and ureterocalicostomy13,14. Mid ureteral strictures can be excised and end to end anastomosis is performed after spatulation of both ends. It is possible to bridge a gap of 4-5 cm by mobilizing the ureteric ends8. For lower ureteral strictures reimplantation of ureter into bladder is the procedure of choice. Reimplantation with or without psoas hitch is successful in 90 per cent of cases13. Sometimes Boari flap is combined with psoas hitch if the gap between ureteral end and bladder is large. Alternatively gap can be reduced by bladder elongation techniques11,19. Rarely miscellaneous procedures like renal autotransplantation. ileal substitution of ureter and nephrectomy has to be considered in special situations11.

Profile of Patients of Cutaneous Leishmaniasis from Multan