Profile of Patients of Cutaneous Leishmaniasis from Multan

Objective: Cutaneous leishmaniasis is endemic in Multan. Therefore this study was undertaken to elurcidate the epidemiological features with main emphasis on the geographical distribution of the infection in Multan.
Settings: Multan city Dermatology outpatient department, Nishtar Medical College.
Method: Records of 173 diagnosed patients of cutaneous leishmaniasis were retrospectively reviewed according to the age, sex, number and site of lesions, results of the smear for LD bodies and residential area. Results: The disease was more common in the children and young adults, with male to female ratio of 3:2. The maximum number of lesions were on the lower legs. Sixty five percent of the patients were from the interior old city.
Conclusion: The main focus of infection is in old interior part of the city with microfoci of the disease scattered throughout the city (JPMA 51:279:2001).

Cutaneous Leishmaniasis or Oriental Sore, is a very ancient parastic disease, the most ancient medical document being Ebers Papyrus in Egypt, which dates back to 2000 year BC11. It is acquired through the bite of infected female phlebotamine sandfly, transmitting different species of protozoa leishmania and resulting in noduloulcerative skin lesion, which ultimately leads to scar formation.
It is prevalent in tropical and subtropical areas throughout the world, affecting millions of people. In Pakistan cutaneous leishmaniasis occurs throughout the country, but is highly endemic in the provinces of Baluchistan and N.W.F.P2,3. In Punjab the disease is restricted to Multan and Dera Ghazi Khan and in Sindh the disease has been reported from Karachi, Dadu, Larakana and Jacobabad districts4.
Although a self-limiting disease, the chronicity and disfigurement that it causes, cutaneous leishmaniasis, is of medical importance5. Therefore this study was undertaken to find out the epidemiological features with main emphasis on pointing out the areas in Multan, where it is prevalent, so that the control and preventative measures could be taken in these areas.

Nishtar Hospital provides medical care to the urban area of Multan, which consists of the interior old city and the surrounding new colonized areas and the rural population around Multan. Therefore the case records of the patients only from Multan were reviewed for the period Februray 1999-August 2000. The cases were clinically and parasitologicaHy (smear for LD bodies) confirmed. In case of negative smear the diagnosis was confirmed by histology. These cases were stratified according to age, sex, number and site of lesions, smear positivity for LD bodies and area of residence.

During the 19 month period, case records of 173 patients of cutaneous leishmaniasis, from Multan were reviewed.
Persons of all age groups and both sexes were effected. One hundred and three (60%) were male and 70 (40%) females with male to female ratio of 3:2. The mean age (+SD) was 18.9 (+ 12.3) years with the disease being most common in children and young adults, 64% of the patients were less than 20 years (Table ). 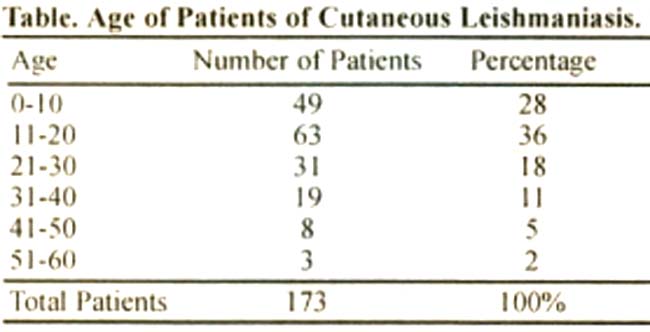 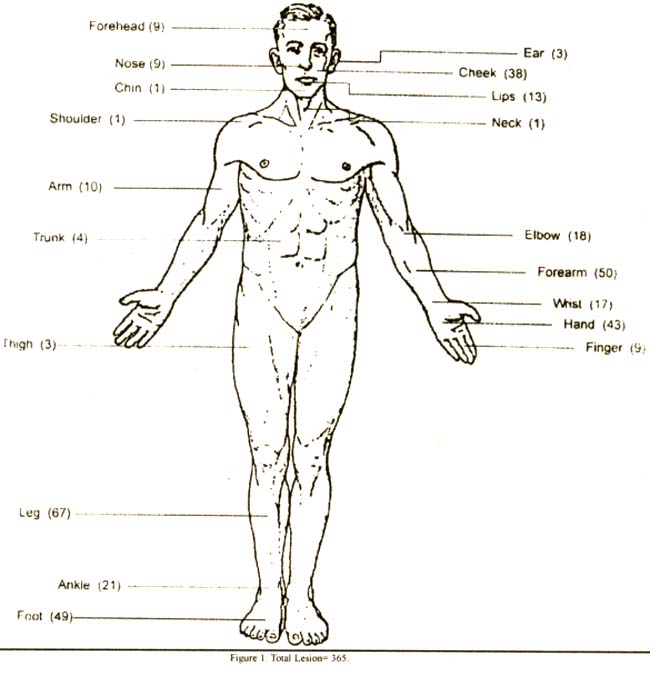 Clinically all the lesions were of dry type. The smear for LD bodies were positive in 135 patients (78%). negative in 16 (9%) while in 22 patients (13%) it was not done. Those with the negative smear had predominantly lymphocytes in the smear.
Sixty five percent of the patients were from the old central city and the adjacent area (Figure 2). 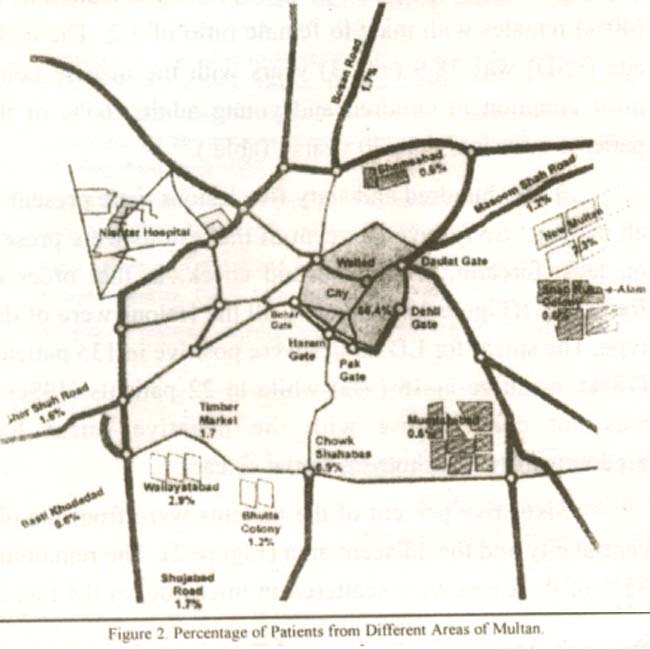 The remaining 35% of the cases were scattered in microfoci in the rest of the city.

Cutaneous leishmaniasis has been endemic in Multan for long time6. A single attack of disease confers life-long immunity against that species7. Natural immunity is thus present in the endemic areas. Therefore the disease was mainly present in non-immunised children and young adults, who had not been exposed to the disease, an experience familiar to others8. Male predominance is most wiely due to out-door professions and their habit of sleeping outside without bed-nets or proper clothing during night when the sandflies are active9. Thus majority of the lesions was on the exposed parts the limbs and face because these are the areas, which are easily accessible for the sandfly to bite6.
Smear was positive in most of the patient10. Those with a negative smear, had infection for a longer period (12 out 16 patients had lesions for more than 7 months) and all of these patients showed predominantly lymphocytes in their smear indicating development of 1-cell immunity11.
The geographical distribution showed the highest focus of infection is prevalent in the interior walled city. This part of the city is heavily populated and highly congested with old buildings, dark niches and cracks in the ground providing suitable habitat for the sandflies6. ln contrast to the previous study6, cases were also encountered outside the old city, scattered throughout the remaining city. Probably this can be due to the shifting of the people from the interior city of the new colonies and thus importing the disease in these areas. Furthermore other reservoirs eg dogs, could also be resposible for the spread. However further epidemiological studies are required to implicate the vector and the reservoir host in the spread of the infection in Multan area.