Esophageal perforation is the most serious injury of the digestive tract due to free drainage of gastric contents into the mediastinum leading to development of severe pleuromediastinitis, chest empyema, sepsis and multiple organ dysfunction syndrome. The mortality rate ranges between 20% and 30%.1 Iatrogenic injury is the most common cause of esophageal perforation. Other causes include spontaneous perforation (Boerhaave syndrome), caustic chemical ingestion, foreign body penetration and trauma.2 The diagnosis depends on a high degree of suspicion, recognition of clinical features and confirmation by contrast esophagography or endoscopy.3 Treatment may be conservative or surgical, depending on the cause, site, extent of perforation and time lapsed since perforation, and the overall health of the patient.4

A 73 year old male was admitted in the Emergency department following referral from a local general practitioner where he initially presented 4 days previously with fever, shortness of breath, cough and gradually worsening chest pain following acute bouts of vomiting. He was managed with antibiotics for pneumonia but due to worsening symptoms he was refered to this tertiary care hospital.
On examination, the patient was in respiratory distress. His vitals were: Pulse 120/min, Blood Pressure 100/60mmHg, Temperature 38ºC, Respiratory Rate 28/min and oxygen saturation of 93.8%. His chest was dull on percussion with decreased air entry on the left side. 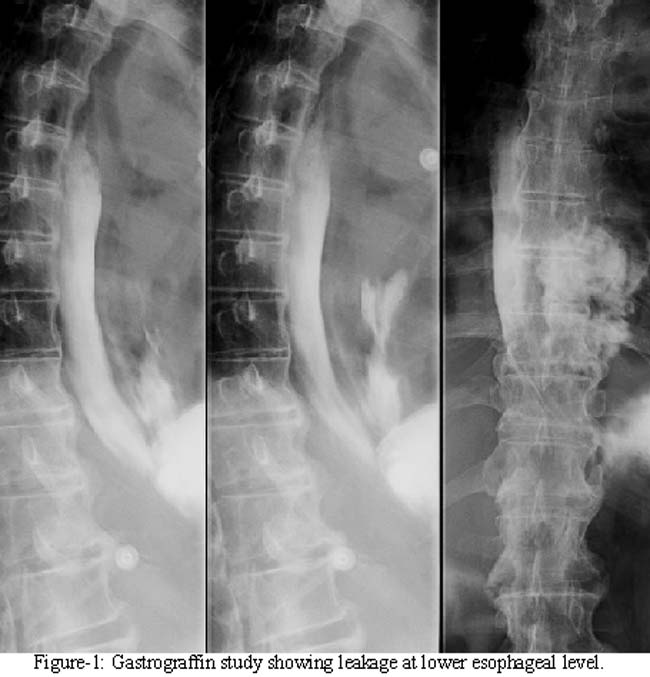 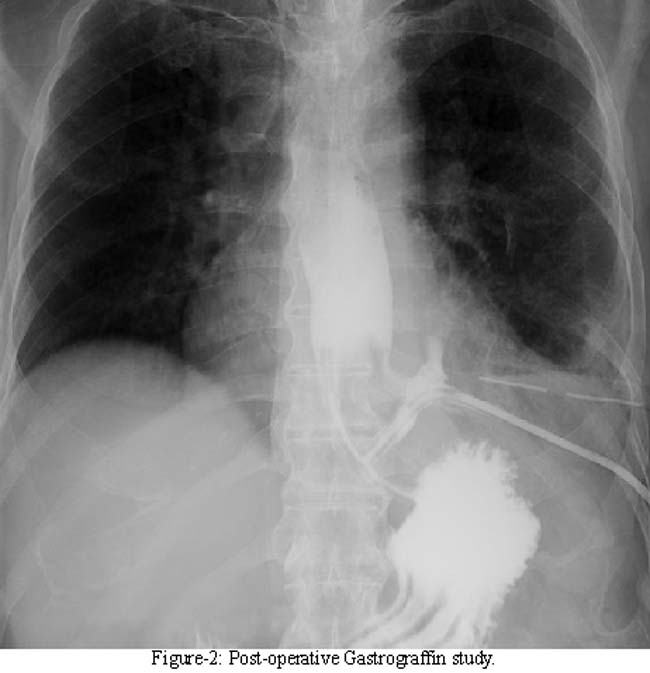 Chest X ray done at that time showed multi-loculated effusion with multiple air fluid levels leading to complete left lung collapse. Due to suspicion of esophageal perforation, a water soluble contrast esophagography was done which showed frank extravasation of contrast on the left side, 3cm above the gastro-esophageal junction. This hydropneumothorax was confirmed by CT scan as well.
He was initially resuscitated with intravenous fluids and antibiotics and then taken to the operating room. He underwent left thoracotomy for drainage and decortications of the left lung. The esophagus was found perforated at the lower end. T tube was inserted through the perforation and wound closed in layers with interrupted PDS 3 sutures. The long limb of T tube was brought out through left anterior chest. His chest washout was done followed by placement of chest drains. A separate laprotomy was done for gastrostomy and feeding jejunostomy.
Post-operatively, the patient required ventilatory support until he recovered his lung functions. His chest tubes continued to drain pus. Special diabetic diet was started via jejunostomy tube and endocrine consult was sought for diet control. The patient\'s progress was monitored with serial chest x-rays which showed progressive improvement of chest effusion and left lung collapse. Gastrograffin study done one month post-operatively showed no evidence of leakage. Henceforth, the patient was discharged home with two chest drains, a T tube, a gastrostomy and a jejunostomy tube.
Two months later contrast study of esophagus was repeated which demonstrated no leakage. Consequently both T tube and chest tubes were removed. He was allowed oral intake which was progressed over a period of time. The patient has been in follow up for past three years and has not required a subsequent procedure.

All treatment strategies for esophageal perforation aim at prompt prevention of further spillage of gastric contents via perforation, debridement of devitalised tissue and optimization of nutrition.5
Nonoperative treatment is acceptable only in cases of small leaks without pleura contamination, drainage of the cavity back into the esophagus, clinical stability and minimal clinical signs of sepsis according to criterion laid by Cameron et al.6
Esophageal perforations recognized within 24 hours have historically been treated with primary repair which remains the gold standard.2 Recently, use of stents (both metal and self-expandable polyfex) has been reported as an effective method of sealing esophageal perforations.7
Beyond 24 hours, use of either diversion and exclusion by esophagostomy or creation of a controlled fistula by T tube is advocated. Exclusion and diversion commits the patient to a second operative procedure to restore continuity of gastointestinal tract. Whereas repair over a drain, using T tube, is ideally suited for delayed esophageal perforation as the incidence of post-operative leaks is high in primary repair and undrained collections are a major contributor to sepsis and death.2 T tube method has additional advantage of requiring no future surgery. In this case, T tube method proved to be a definitive surgery for delayed esophageal perforations.
Esophageal resection and secondary reconstruction is reserved for patients with perforation and intrinsic esophageal disease.2
In 1970 Abbott et al8 first reported use of T tube drains to treat 10 patients with esophageal perforation. Since the initial series by Abbot et al there have only been handful of publications describing the use of T tube method. Of the ten cases reported by Naylor et al,9 seven survived with radiological evidence of defect closure in six. Larsson et al10 salvaged all five patients with delayed esophageal perforation by using T tube method.
In Abbott\\\'s method, T tube is inserted into esophagus following debridement of adjacent wall so that its inferior portion extends into the stomach. Then esophageal wall is closed loosely about the tube with sutures placed in the nearest healthy submucosa. The long limb of the T-tube is anchored to the diaphragm securing it away from aorta. Then mediastinum is debrided and chest tubes are inserted. All thoracotomy tubes and the T tube are connected to suction. On the 21st postoperative day, T tube is removed and a straight thoracotomy tube is inserted back into the fistulous tract. This tube is attached to suction and withdrawn from the chest at the rate of 2 cm per day.8
Abbot\\\'s method can be modified by bringing the long limb of T tube out via separate abdominal incision and placing a second drain parallel to T Tube to drain any leakage from the esophagus around the tube. This avoids the formation of periesophageal cavity and reduces risk of empyema.10
The patient is allowed to take liquid diet if no leakage is demonstrated on post-operative constrast study.2 After 4 to 6 weeks, the T-tube is withdrawn gradually in an outpatient setting and the fistula is expected to seal off with a fibrous track within a week.
In a recent review, Linden et al2 reported that modified T-Tube repair of delayed esophageal perforation results in a low mortality rate similar to that seen with acute perforations. Of the 43 cases, most acute thoracic esophageal perforations were treated with primary repair and had a mortality rate of 5%, whereas most delayed perforations were treated with T tube repair and had a mortality rate of 8.7%.
The problem with T-tube method might be that the hospital stay of patients receiving this method of treatment is longer than that of patients receiving successful surgical primary repair. Linden et al.2 reported a hospital stay of 47 days and a morbidity rate of 83% in patients managed by T tube; whereas patients treated with primary repair had a hospital stay of 22 days and a morbidity rate of 36%. This is not necessarily due to the increased complexity of care of the T-tube patient, but may simply reflect that patients who were more sick, with more local inflammation and contamination, and underwent T-tube repair.

This case report highlights the safety, simplicity and efficacy of T-tube drainage as the definitive treatment in the management of delayed esophageal perforation.

The constant threat of terrorism: stress levels and coping strategies amongst university students of Karachi