Misoprostol, a synthetic analogue of prostaglandin E1, is gaining worldwide popularity not only for induction of labour but also for pregnancy termination. Several recent studies have reported excellent results with its intravaginal use for pregnancy termination in second trimester.1-4 Nevertheless, in literature there are many case reports of serious complication of uterine rupture in such terminations with misoprostol, both in previously scarred3,5 as well as in unscarred uterus.6 This complication has also been reported with other agents like prostaglandin E2 and oxytocin especially in scarred uteri.5 In few retrospective studies examining whether a previous caesarean delivery carries a higher risk of complications in women who undergo pregnancy termination with misoprostol, no increased risk of uterine rupture was found.7,8 Exact incidence of this complication with misoprostol was difficult to define till the novel systemic review by Doyal.9
In this report, we describe a case of uterine rupture in an unscarred uterus during second-trimester pregnancy termination with intravaginal misoprostol. Apart from the clinical symptoms, the diagnosis was mainly confirmed on the sonographic findings that prompted immediate surgical intervention.

A healthy 30 year old woman, G5 P4+0, was admitted in our department at 26 weeks of gestation with complaints of dull lower abdominal pain and no foetal movements for one day. There was no history of per vaginal leakage or bleeding, no history of Dai handling or any other surgical intervention. She had all previous 04 uneventful spontaneous vertex deliveries. Medical and Surgical history was unremarkable. She was haemodynamically stable. Her transabdominal ultrasound revealed missed abortion of 15 weeks gestation. Her Baseline investigations and clotting profile was normal. Pregnancy termination was planned after informed and written consent of the patient. According to departmental protocol, termination was started with 400 µg of intravaginal misoprostol, repeated every 4 hours after cervical scoring till maximum of 4 doses in 24 hours. Patient did not go into labour, so Termination of Pregnancy (TOP) was deferred for next 24 hours. But 14 hours later patient had rupture of membranes with fever of 99°F. Under the cover of intravenous antibiotics, she was then given 2 more doses of 400 µg intravaginal misoprostol 04 hours apart, when she complained of continuous lower abdominal pain with mild vaginal bleeding. On abdominal examination, there was tenderness and fullness in the left iliac fossa. On vaginal examination, the uterus was 14 weeks size with internal os still closed and marked fullness and tenderness in left fornix. Transabdominal ultrasonography was done which showed empty upper uterine cavity with foetus in lower part of uterine cavity in such a way that half of its body seemed to be protruding into left parametrium making a 6×6cm mass with soft tissue echoes all around it. Patient\\\'s blood pressure at this time was 110/70 mm Hg and Pulse was 100 bpm. On strong suspicion of rupture of lower uterine segment, an emergency laparotomy was performed. There was no haemoperitoneum and no obvious uterine rupture but a large 7×8 cm left broad ligament haematoma bulging mainly posteriorly and containing foetal parts, was seen (Figure). 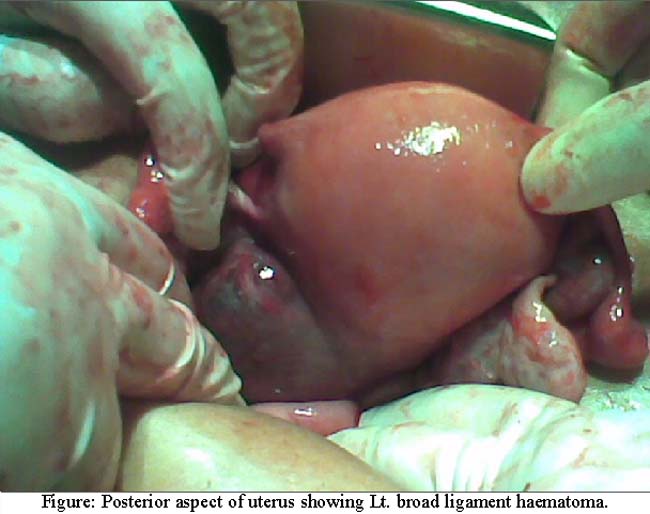 Drainage of this haematoma and extraction of foetus was planned through a Dee Lee\\\'s uterine incision which revealed a 1.5 inch long left uterine wall rupture with foetus partly expelled in broad ligament. Whole of the placenta with foetus was extracted through this rent. Afterwards the rent was repaired, uterus was closed and tubal ligation was done to prevent any catastrophic complication in the next pregnancy. The estimated blood loss was 500 mL, and patient did not require blood transfusion. However, during 3rd - 8th postoperative day she developed fever of 99°F-102°F, which responded to triple regimen antibiotics. Patient was finally discharged on 13th postoperative day on oral haematinics.

Uterine rupture occurs rarely in second trimester medical terminations of pregnancy. The incidence of uterine rupture among women with a prior caesarean delivery during second-trimester pregnancy termination with prostaglandin E2 or oxytocin was 3.8% in a retrospective review by Chapman et al.5 The risk is even higher when oxytocin is used with prostaglandins.10 The incidence of this complication with misoprostol was difficult to define because of paucity of its use. The first recorded case of uterine rupture in unscarred uterus after administration of oral mifepristone and vaginal misoprostol was in 1996.5 So far many case reports have been published reporting uterine rupture after misoprostol administration in the second trimester, both in previously scarred.2,3 as well as in unscarred uterus.6 An extreme case of uterine rupture at 8 weeks\\\' gestation has also been reported in a scarred uterus.5 Nevertheless, few earlier studies reporting on population having uterine scar.7,8 or including both types of population (scarred/unscarred uteri),1,4 did not show any case of uterine rupture. To estimate the risk of uterine rupture in women undergoing second-trimester abortion with misoprostol, a systemic review of such 16 studies was done by Doyal9 which showed that the risk of uterine rupture in women with prior caesarean delivery was 0.28%, compared to women without prior cesarean delivery having 0.04%.
There was no set regimen protocol for intravaginal misoprostol in second trimester pregnancy termination and all studies have used a different regimen. Mostly initial dose was 400µg repeated every 4-6 hours, up to maximum of 1200 µg -1600 µg per 24 hrs. Some studies have augmented misoprostol either with oxytocin or mifepriston.5,6 In our case we used maximum of 1600 µg misoprostol per 24 hours.
Recently, FIGO has recommended the regimen protocol10 for second trimester pregnancy termination with 100 µg -200 µg intravaginal misoprostol, repeated 06 hourly till maximum 04 doses /24 hours. and its use should be with care in a previously scarred uterus. When compared, the dose of misoprostol used in our case was much higher then this recommendation.
Based on the results of Doyal\\\'s review, the risk of uterine rupture among women even with a prior caesarean delivery undergoing second-trimester abortion using misoprostol is less than 0.3%. Although this may be acceptable to both patients and health care providers, but the dose regimen protocol must be made very cautiously in accordance with FIGO recommendations and curtailed according to patients\\\' past obstetric history. These protocols must be subject to departmental audit on a regular basis and to minimize its potential hazards.
As it is unusual to observe a uterine rupture during the second trimester pregnancy termination, the diagnosis of uterine rupture in our case was substantiated by ultrasonography. Because of the rarity of this complication, as well as the obscure symptoms that may exist, especially after epidural anaesthesia, the role of sonography becomes essential in such cases.

Despite becoming the drug of choice for pregnancy termination in second trimester, uterine rupture can still occur as a serious rare complication with intravaginal misoprostol. Therefore, regimen protocol should be made very cautiously according to recent recommendations and patients past obstetrical history. Dose should even be lower in a previously scarred uterus. Moreover, the diagnosis of uterine rupture can easily be established by ultrasonography, permitting immediate surgical intervention.

Testicular torsion: A diagnosis not to be missed

Paget’s disease in an Asian woman