Otits media is a common problem. Some of its complications that were seen frequently in the preantibiotic era are rare today. We report a case of an 8 year boy who presented with earache, retro-orbital pain and diplopia secondary to a sixth nerve palsy - Gradenigo\\\'s syndrome. In this syndrome infection from the middle ear spreads medially to the petrous apex of the temporal bone. Work-up includes CT scan of the temporal bones. Timely management with intravenous antibiotics (± surgery) is needed to prevent intra-cranial complications.
Keywords: Gradenigo’s syndrome, Earache, Retro-orbital pain.

Otitis media is a common disease involving children. In the preantibiotic era, it was often complicated by a spread into petrous apex. The classic symptoms of petrous apicitis, described by Gradenigo in 1907 include otitis media, deep facial pain and ipsilateral abducent nerve paralysis.1 Treating the underlying infection is the hall mark of treatment to prevent intracranial complications and permanent abducent nerve paralysis. Surgical exploration was the mainstay of treatment previously, however, the condition is now mostly treated conservatively with antibiotics, reserving surgical exploration for non responsive cases only.

An 8 year old boy presented in the clinic with complaints of right earache, right sided retro-orbital pain and diplopia for one week. On presentation he was not febrile and developed squint on right gaze due to right lateral rectus palsy (Figure-1). 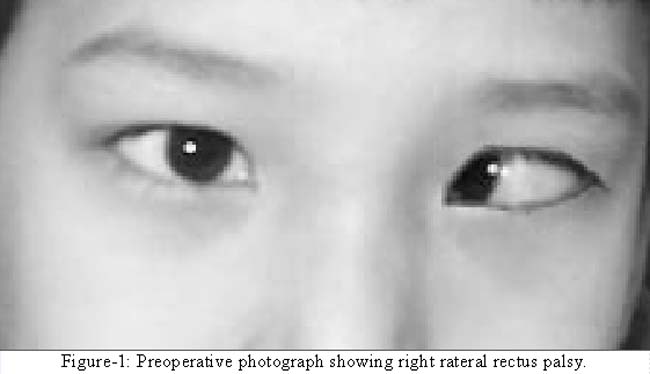 A diagnosis of Gradinego\\\'s syndrome was made and patient was started on intravenous Ceftriaxone. However, no clinical improvement was seen after 7 days of therapy. He then underwent right cortical mastoidectomy and grommet insertion. Per-operatively thick, dark brown, mucoid fluid was found in middle ear and in mastoid cavity, which was completely sucked out. As the patient was already receiving antibiotics, culture of this fluid was not sent. He received Ceftriaxone postoperatively for another week. On 7th post operative day his right lateral rectus showed signs of recovery and within 2 weeks it became normal. Earache and orbital pain was also relieved completely. After 8 weeks follow up he had no symptoms. Patient was followed up for 8 consecutive weeks, during which time he remained asymptomatic.

Gradenigo syndrome is a rare complication in which infection spreads from the middle ear to the petrous apex. This results in damage to abducent and trigeminal nerves. The spread of infection occurs through pneumatization,2,3 vascular channel or bone erosion.4 It can be seen as a complication of acute or chronic otitis media. In our case history and clinical findings are more consistent with acute otitis media as there was no ear discharge and tympanic membrane was intact. In imaging modalities the CT scan of temporal bone has shown good results as it can give details of petrous apex, bone windows are more appropriate for bony erosion.5,6 In our case CT scan did not show any bony erosion but opacification of mastoid and petrous apex was clearly evident. MRI is better than CT Scan to provide details of soft tissue and can identify any mass lesion and abscess formation.2 On T1-weighted MRI, inflammation of the petrous apex with peripheral enhancement of gadolinium is evident whereas T2-weighted MRI reveals a high signal intensity.7
Although ottitis media is a commonly seen condition in our part of world, but the best of our knowledge Gradenigo syndrome has never been reported from Pakistan.
Generally the condition is treated with prolonged antibiotic therapy (6 weeks to 6 months),3 with surgery reserved for non responsive cases. The surgical option includes myringotomy and Grommet insertion alone or with mastoidectomy and sometimes with drainage upto petrous apex.3 With the wide spread use of antibiotics the symptoms may be masked, a high index of suspicion and early CT scan can prevent serious morbidity and mortality,8 like permanent neve palsy and intra-cranial abscess.

Testicular torsion: A diagnosis not to be missed

Paget’s disease in an Asian woman