Characteristics of an adult photosensitive cohort

Intermittent Photic Stimulation (IPS) is a well recognized provocation maneuver during EEG recording which helps in identifying underlying photosensitivity. The frequency and characteristics of various responses to photosensitivity among our adult patients was determine. EEGs of subjects > 15 years from 2003-2006, were reviewed. Two main photosensitive responses were observed: Photoparoxysmal (PPR) and Photic-driving response (PDR). Demographic and clinical data was also collected. Out of 5950 EEG\\\'s performed, response to IPS were detected in 1.2% (n=73) of EEGs. Out of which 49 (67%) had PDR and 24 (33%) had PPR. Mean age of PPR group was 25.7 ± 12 years with equal gender distribution. In PPR subjects, epilepsy was the final EEG conclusion in majority of patients 96% (n=23) p-value < 0.001. Primary Generalized Epilepsy being the most common 52% (n=12). In contrast, PDR observed in normal EEG\\\'s was 45% (n=22). This study revealed low frequency 1.2% of photosensitive responses. PPR is seen frequently in patients with epilepsy (96%, p-value<0.001), and highest rate (52%) of photosensitivity was observed in patients with primary generalized epilepsy.

Photic or pattern stimulation can provoke seizures in predisposed individuals, but such stimulation is not known to increase the chance of subsequent epilepsy.1 Intermittent Photic Stimulation (IPS) is a well recognized provocation manoeuvre during EEG recording which helps in identifying underlying photosensitivity. Varying EEG waveforms during IPS have been described. This procedure, originally described by Walter et al2 typically involves delivering trains of light flashes for several seconds at a fixed frequency (stimulation frequency or flash rate), although some authors have used sweeps of increasing and decreasing flash rates. Photoparoxysmal responses (PPR); defined as the occurrence of generalized spike, spike-wave or polyspike-wave discharges, is consistently elicited by IPS and has a high correlation with clinical epilepsy.3 There are four different categories of PPR described in a genetic cohort with photosensitive epilepsy.4 Type 1; spikes with occipital rhythm, Type 2; parieto-occipital spikes with a biphasic slow waves; Type 3; parieto-occipital spikes with biphasic slow waves with frontal spread and Type 4; with generalized spikes and waves or polyspikes and waves. They also reported that Type 4 PPR occurred more frequently in probands and siblings of photosensitive epileptics. The objective of our study was to determine the frequency and characteristics of photic responses in adult individuals. We, felt by looking at this data we may be able to obtain some prevalence of photosensitivity in a hospital cohort, which may give us an insight for future prospective population based studies and generate proper management with treatment options.

We observed all EEGs in individuals aged > 15 years from January, 2003 to December, 2006. We selected those EEG\\\'s which showed response to IPS. All EEG recordings were performed with an 18-channel Nihon-Kohden (Digital EEG machine) with electrode placement according to the 10-20 international system. All EEGs were read by Board Certified Neurologists and Neurophysiologists. IPS was carried out in all patients with eyes closed; using a photic-stimulator with stroboscopic light source placed 30cm from the nasion. The room was kept dark during IPS. Trains of 10 seconds of photic stimulus were delivered with an interval of 10 seconds between each train, with and an initial flash rate of 3 hz/sec and higher flash rates subsequently delivered upto 33 hz/ sec.
PPR was defined as spike-wave or polyspike and wave complexes, activated by a band of flash rates, that does not begin with the first flash and frequency is not time-locked to the stimulus. They are bilaterally synchronous, being more pronounced in frontal, central and occipital regions.5 PDR was defined as response generated at flash rates >3 Hz, maximum response obtained with frequencies at or near to the frequency of subject\\\'s alpha rhythm. The response generated in the occipital region was time locked to the stimulus, to have the frequency of the stimulus or harmonic or subharmonic frequencies.5 We also gathered the demographic data, reason for referral to EEG lab, history of epilepsy and family history of epilepsy. Results were analyzed on SPSS 15. Comparison between the two groups of patients was performed by Student\\\'s t-test and Chi-square when appropriate. p<0.05 was considered statistically significant.

Out of 5950 EEGs reviewed, only 1.2% (n=73) patients had response to photic stimulation. Out of which, 67% (n=49) patients had PDR and 33% (n=24) had PPR. Not a single subject with positive response to IPS demonstrated both normal PDR and abnormal response PPR during same recording. Mean age of subjects with photo-driving response (mean 35±14, range: 15-75 years) was significantly higher as compared to those with PPR (mean-25.7, range: 16-65 years) (p-value: 0.007). Higher frequency (75%) of PPR was noted in the age group of 16-25 years, and whereas, that of PDR in a slightly broader age group of 15-45 years There was a female predominance in the PDR group 61% (n=30), as compared to equal distribution of gender in the PPR cluster. Family history of epilepsy related more strongly, though in a non-statistically significant manner to PPR group (p-value 0.45). History of seizure as reason for referral showed a statistically significant association with PPR on IPS, as 83% (20) patients with history of a seizure constituted the major bulk of PPR group (p 0.001), while in PDR group reason of referral was mainly with non-epileptic events 57.1% (28). Basic characteristics of 2 groups are shown in table. 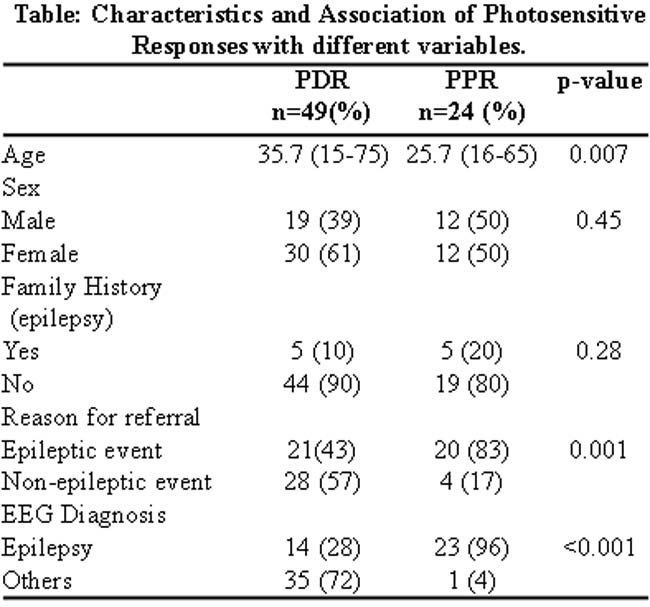 In PPR subjects, epilepsy was diagnosed in the final EEG in a significant number of patients 96% (n=23, p=<0.001). Amongst, these majority had primary generalized epilepsy 12 (52%), followed by partial epilepsy in 8 (35%), secondary generalized epilepsy in 3 (13%). Only one (4%) subject had diagnosis other than epilepsy i.e. diffuse encephalopathy as final EEG conclusion. None of the normal EEGs demonstrated PPR. In comparison in the PDR group, majority of EEGs had a final conclusion other than epilepsy 35 (72%). The non- epileptic diagnosis in the PDR group was normal in 22 (45%) subjects, and diffuse encephalopathy in 13 (26%). Epilepsy was the final conclusion in only 12 (28%) EEGs in PDR group.

The frequency of photosensitivity in the present study is fairly low 1.2% as compared to the published literature, probable rationale for this is that our sample included patients referred with suspicion of seizure or epilepsy, not diagnosed epileptics as was the case in the study by Obeid et al.6 PPR being the smaller subdivision of the photosensitive group. Obeid et al,6 noted a prevalence of 7.3% among Arabs with epilepsy in Saudi Arabia. This however, is in striking contrast to the frequency 3.5% of PPR noted among the South Indian epileptics.3 However, variability in the prevalence of PPR among different ethnic groups residing in the same geographical region and studied in the same EEG laboratory favour the influence of genetic rather than technical or environmental factors.3
Although, the mean age 25.7 ± 12 years of our subjects with PPR was significantly less as compared to the PDR group, it was more than that of PPR epileptic subjects in a Japanese survey7 and south Indian epileptic patients.3 Also, unique in our study was a much wider age range, with higher incidence of PPR noted in the age group of 16-35 years, and PDR in a slightly broader age group of 15-45 years. No gender preference was recognized in our study in contrast to the female predominance reported by Radhakrishnan et al3 and Shiraishi et al7 Other factors which related with a PPR response on IPS were a family history of epilepsy and an epileptic event as the reason for EEG referral. The PPR was observed mostly in the patients with idiopathic generalized epilepsy, while PDR in normal subjects. However, what was more intriguing was that not a single subject demonstrated both types of photosensitive responses to IPS, indicating no causal relationship between PDR and PPR, and a possible different pathophysiology behind the two photosensitive responses.
The present study included only EEG laboratory referrals, limiting the results to those who had some symptomatology, in addition, only adult subjects were recruited, lacking the juvenile photosensitive data, thus our results may not truly represent the general population of Pakistan. Future, research at this point should be directed to identify the role of different antiepileptics in suppressing photoparoxysmal response, and in determining the incidence of photosensitivity in general population, and especially in those at risk like, air crew and the development of national guidelines for protection against photosensitivity in high risk subjects.
Disclosure:
The study has not received any financial support.