Glycated haemoglobin; past, present, and future are we ready for the change

Glycated haemoglobin is defined as haemoglobin that is irreversibly glycated at one or both N-terminal valines of the beta chains. This definition does not exclude haemoglobin that is additionally glycated at other sites on alpha or beta chains.1
HbA1c has been the most widely used and accepted test for monitoring the glycaemic control in individuals with diabetes. Once a haemoglobin molecule is glycated, it remains in the red blood cell for the rest of its life-span (120 days). As such, It provides information about the degree of long-term blood glucose control. The HbA1c level does not reflect an exact mean blood glucose; rather, it is weighted proportionally towards recent levels.2 The formation of glycated Hb depends upon ambient glucose concentrations in which erythrocytes circulate as well as the duration of exposure. A whole blood sample for glycated Hb is sufficient regardless of prandial state and clinical setting.
Historical Perspective:
In 1955, researchers for the first time described, that adult haemoglobin contains heterogenous molecules. The significance of this finding was not explained till 1969 when Rahbar et al. 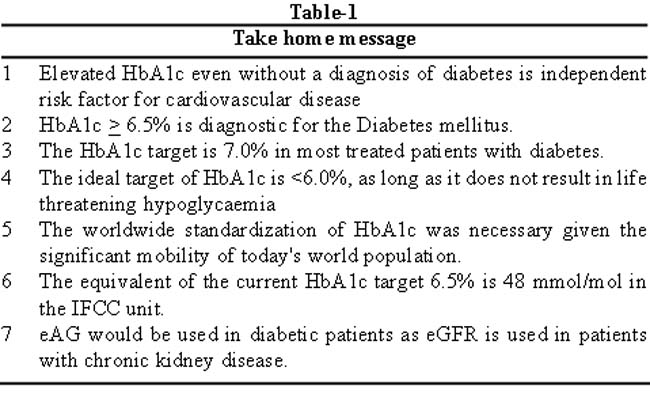 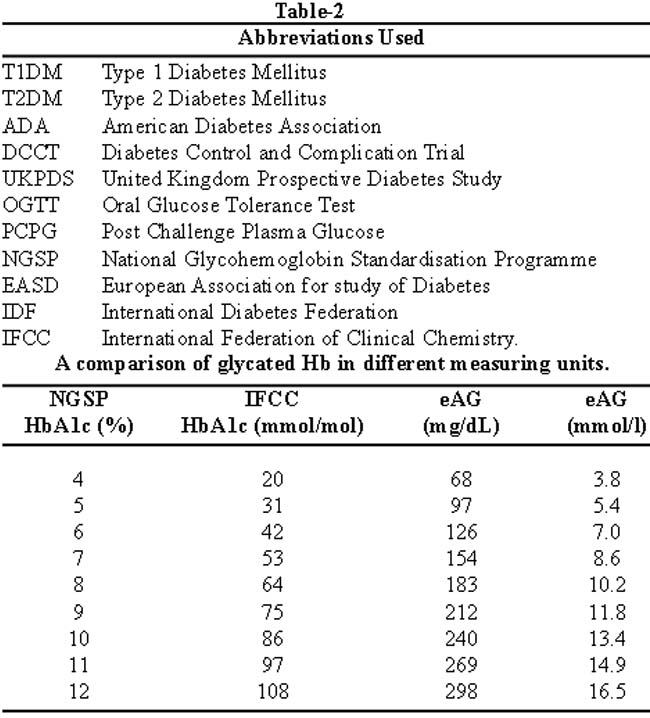 described that unusual haemoglobin found in diabetic patients was HbA1c, also noted a two-fold increase of HbA1c in diabetic patients.3 By the mid 1970s, the nature of the chemical reaction had been explained. Glycation, is a spontaneous non-enzymatic reaction in which glucose binds covalently with haemoglobin at amino terminus of the b-globin chain.4 In 1976, HbA1c was described as a useful mean for monitoring the glycaemic control in diabetic patients.5 By the early 1980s, The HbA1c test was widely accepted in clinical practice.
Non-enzymatic Glycation verses Enzymatic Deglycation:
Most proteins (including haemoglobin) react with sugars to form covalent compounds without the involvement of enzymes. This chemical process is termed non-enzymatic glycation. The resulting accumulation of advanced glycation end products is associated with the progression of the complications of diabetes whereas enzymatic deglycation reverses the process of non-enzymatic glycation and generates free amino groups.6 Enzymatic deglycation is a formidable defence system against non-enzymatic glycation in mammalian cells. This system operates using fructosamine-3-kinase (FN3K), phosphorylating fructoselysine residue on glycated proteins and thereby destabilizing the compound, ultimately causing the decomposition of the glycated proteins.7,8 This process of enzymatic deglycation is overwhelmed by episodes of extreme hyperglycaemia in individuals with diabetes as non-enzymatic glycation continues unabated.9 In the long run, it alters the stability of the protein structure, ultimately leading to cellular dysfunction.10
These Advanced Glycation End products (AGEs) directly and indirectly (via receptors) promote the development of cardiovascular disease.11 They accumulate in different parts of the body and interact with receptors for advanced glycation end products (RAGE), induce oxidative stress, increase inflammation and enhance extracellular matrix deposition, thereby accelerating the process of endothelial dysfunction. Consequently, they result in accelerated plaque formation and ultimate atherosclerosis in diabetes.11,12
Glycated haemoglobin, intermediary compound is reversible but after some internal rearrangement of the compound, a stable HbA1c is formed.13 Several glycation sites of the HbA molecule exist; N-terminal valine residue of the b-chain is the predominant glycation site, accounting for 60% of bound glucose. Of the three types of HbA1 namely, HbA1a, HbA1b, and HbA1c. HhA1c represents the most prevalent glycated species.
Clinical Use of HbA1c:
The world is facing an escalating epidemic of diabetes. More than 220 million people worldwide have been diagnosed with diabetes, although the actual number of people with diabetes is likely to be higher because of the insidious onset of Type 2 diabetes. Moreover, many people who have impaired glucose tolerance remain outside the diagnosed community of patients. The increasing life expectancy combined with the emergence of T2DM in children has resulted in phenomenal increase in diabetes related complications, becoming one of the major causes of disability and death worldwide. Type 2 diabetes accounts for 90% to 95% of all cases of diabetes. Furthermore, T2DM significantly increases the risk of heart disease and stroke; indeed, 50% of people with diabetes die of cardiovascular disease.14
In 2009 The International Expert Committee recommended the use of HbA1c to diagnose diabetes mellitus with a threshold > 6.5%. However the diagnostic test should be standardized to Diabetes Control and Complication Trial (DCCT) reference assay or a method certified by National Glycohaemoglobin Standardisation Programme (NGSP).15
The use of HbA1c as a test went through nearly three decades of detailed scrutiny before being accepted as a diagnostic test for diabetes. Researchers had long been searching for test of glycaemia that could be used to screen and diagnose diabetes as well as monitor the chronic glycaemic control; such as test, may also be able to predict the onset of complications. 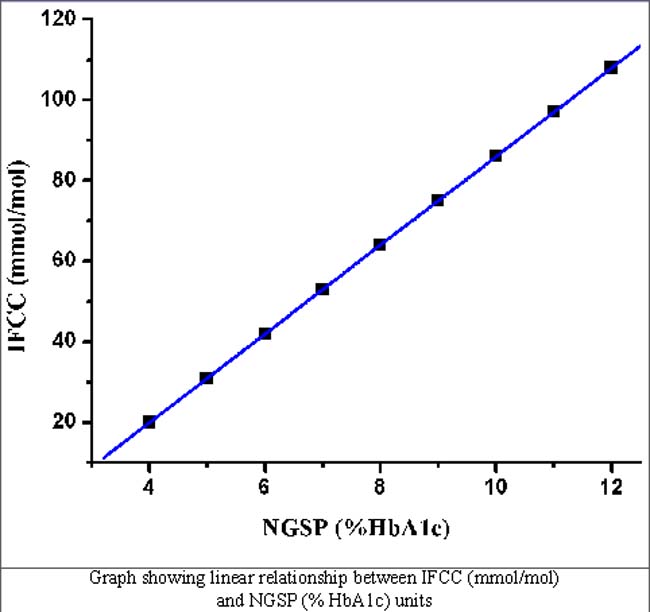 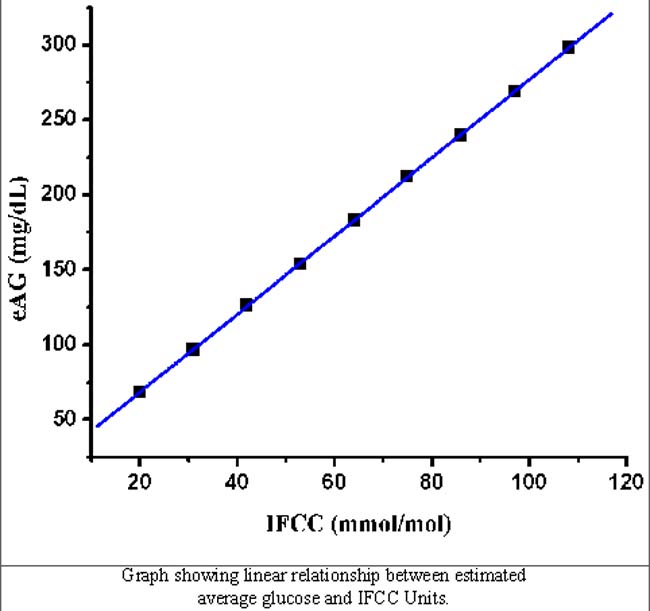 HbA1c levels are used to monitor glycaemic control throughout the world, and all major clinical trials including DCCT in T1DM and the United Kingdom prospective diabetes study (UKPDS) in T2DM have used it as a tool to monitor glycaemic control among the study population. Indeed, it did not happen over night; valuable time and resources have been spent to familiarize patients and health care providers with it. Yet after more than three decades of use, today only 25% of patients in a cross-sectional study were able to report their correct recent HbA1c, and 66% did not know their last HbA1c.38
Daily self blood testing, measured in mmol/L or mg/dl and HbA1c measurement in percentage are somewhat confusing. Given the narrow range of percentages, it is sometimes difficult for patients to comprehend the consequences of even a 1 percent increase or decline in HbA1c. Patients and their caretakers are used to the idea that the HbA1c level should be less than 7% in diabetic patients: a higher reading indicates that the glycaemic control is getting out of hand. Now the IFCC results will be provided in mmol HbA1c per mol haemoglobin. Keeping the NGSP results in percentages along with IFCC results will make the change less confusing.
With the introduction of the new term "estimated average glucose " (eAG). The eAG will be reported along with HbA1c results in the interim. Many physicians feel it would be easier to discuss eAG than haemoglobin in a diabetes out-patient. Others argue that the term eAG will only serve to confuse patients with diabetes: these experts also call for further research, especially among different ethnic groups and special circumstances (e.g., children and pregnant women). How soon all these controversies are resolved, culminating in this term being accepted in clinical use and entering into the lexicon, remains to be seen.