Objective: To assess the clinicians management of patients presenting with acute ischaemic stroke in the emergency departments of two large state run hospitals in Karachi, Pakistan.
Methods: A questionnaire was filled by 59 registered medical practitioners working at these two government hospitals who would be managing stroke patients presenting in the emergency. It was a descriptive cross sectional study designed to assess the methods used by the doctors for diagnosing and treating stroke patients. The data was collected from October to November 2007 and entered using Epi Data Entry and analyzed by SPSS 13.0.
Results: The preferred overall investigation for a suspected stroke patient in an emergency ward was an ECG (98%). 51% of the respondents would prescribe aspirin to most patients (300 mg by 40% respondents). Intravenous tissue plasminogen activator was thought to be beneficial by 43% of doctors, low molecular weight heparin by 91%, subcutaneous heparin by 86.5%, intravenous Vitamin B complex by 20% and steroids by 39% of respondents.
Regarding elevated blood pressure, 60% answered that they would manage the blood pressure according to the type of stroke and 73% responded that they would lower blood pressure when it reached greater than 150/80. 88% of the doctors answered that they would use cholesterol lowering drugs in the management of stroke patients in an emergency. 97% of the doctors recommended rehabilitation and 88% of the respondents believed that there should be separate stroke units.
Conclusion: The development of a standardized protocol and stroke team is recommended which should speed the clinical assessment, decisions for early management and also increase the performance of diagnostic studies.
Keywords: Ischaemic stroke, Aspirin, Tissue plasminogen activator, Heparin, Steroids (JPMA 61:375; 2011).

Stroke is a medical emergency and can cause permanent neurological damage or even death if not promptly diagnosed and treated. Acute stroke is one of the leading causes of mortality and morbidity worldwide.1
In North America, more than 750,000 individuals continue to suffer an acute stroke each year.2 Although no large scale epidemiological studies are available to determine the true incidence of stroke in Pakistan, annual incidence is estimated to be 250/100,000, translating to 350,000 new cases every year.3 Contrary to decline in the incidence of the disease in the Western population, the burden of the disease in South Asian countries (India, Pakistan, Bangladesh, and Sri-Lanka) has inclined and is expected to rise.3
Despite recent advances in the management of cerebrovascular diseases, stroke still exacts a heavy toll in death and disability worldwide.4 However, over the last decade, there has been significant improvement in the management of stroke. The up to date knowledge and awareness of evidence based management of stroke can significantly reduce the morbidity and mortality from stroke. In developing countries a vast majority of patients make the initial visits to general practitioners. This necessitates that general practitioners, family doctors and emergency care physician should be well versed and motivated in order to diagnose and start treatment of stroke patients within an optimal timeframe or refer the patients to competent tertiary care centers. It is interesting to note that there was a low frequency of use by respondents of recombinant tissue plasminogen activator (rt-PA) by emergency physicians in the US. They admitted that their decision to use or not to use rt-PA in the ideal setting was largely due to their own experience, which emphasizes the practice of evidence-based medicine.5
The purpose of the study was to assess the methods used by doctors working in government hospitals in the management of stroke patients and to ascertain if they managed patients according to the latest guidelines. This would enable us to identify any deficiencies in the management of stroke patients. Steps taken to correct the deficiencies in care identified by research will improve the prognosis of stroke patients.
The study was conducted from October to November 2007 at the two largest public sector hospitals of Karachi. The protocol was written prior to the commencement of the study and at that time, there existed no formal research ethical committee. However, informed consent was taken from individual doctors after explaining the purpose and objectives of the study. Public sector hospitals receive the greatest number of patients because they provide treatment at affordable prices for the general masses. However, these hospitals have no standardized protocol for managing stroke patients. Our target population included registered medical practitioners managing stroke patients at two tertiary care government hospitals. In the government setup, the role of the doctors who are posted exclusively in the emergency room (ER) is restricted to stabilizing patients and calling doctors from Medical, Neurological and Neurosurgical wards. The latter doctors were thus selected to fill the questionnaires as these doctors are called on to the emergency department to manage these stroke patients. These doctors initially evaluate the patient, order tests and then decide upon the course for further management. A stroke patient is under the care of these doctors for a longer time compared to doctors posted only in the ER. Therefore, these doctors were chosen in the present study because they are primarily responsible for early diagnosis and management plan for the patients and optimal management by them can change the prognosis of the disease and outcome of the patients. We excluded House Officers (interns) from the study because we considered that they lack experience and do not admit patients, order investigations or initiate treatment. The authors were personally present with each doctor during the time the questionnaire was being filled to ensure there was no confusion. The authors intervened only to clarify a question, if required. No attempt was made to influence the respondents by suggesting the answers. The doctors were told to fill the form assuming that they have all the resources at their disposal and have no financial constraints.
The purpose of the study was to asses the management of stroke patients by doctors rather than knowing the prevailing practices which can be affected by the lack of funding and resources in the government sector. Most of the doctors obliged and filled out the questionnaire but some refused stating lack of time and various other reasons. The data was entered using Epi Data Entry and analyzed by SPSS 13.0. Descriptive statistics were used.

In all 59 physicians filled out the questionnaires out of whom 26 (44%) were resident medical officers, 16 (27%) were post graduates, 7 (12%) were consultants and the rest 10(17%) did not mention their job titles. Fifty-eight (98%) respondents had managed stroke patients at some time in their clinical practice. The response rate was 84%.
The most common investigation carried out by the respondents was ECG 58 (98%). The preferred radiological investigation for a suspected stroke patient in an emergency was Computed Tomography scan (CT) Scan 51 (86.4%). Seven (12%) preferred Magnetic Resonance Imaging (MRI) as their investigation of choice. 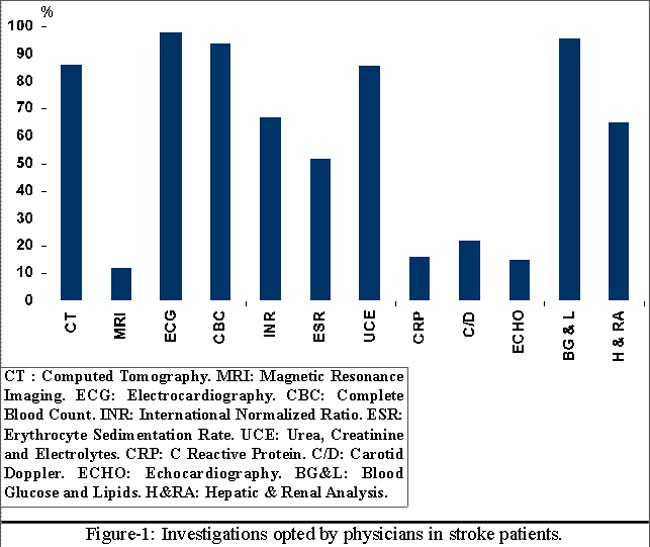 Figure-1 shows information regarding investigations opted for by physicians in the management of stroke patients.
Thirty one (52%) of the respondents would prescribe Aspirin to most patients irrespective of their co-morbids while 28 (48%) would prescribe it to particular patients depending on co-morbids. The usual aspirin dose started was 300 mg by 23 (40%), 75 mg by 17 (29%) and 150 mg by 15 (26%) of the respondents. Twenty six (44%) of the respondents also opted for other anti platelet agents in addition to aspirin.
Intravenous Tissue Plasminogen activator (rt-PA) was thought to be beneficial in most or particular situations by 25 (43%) and chosen to be used rarely by 34 (57%) respondents. Low molecular weight heparin was preferred by 54 (91%), subcutaneous heparin by 51 (86.5%) while 35 (59%) respondents preferred to use Intravenous Heparin in most or particular stroke patients.
Other immediate medications which the doctors preferred to use are mentioned in Table. 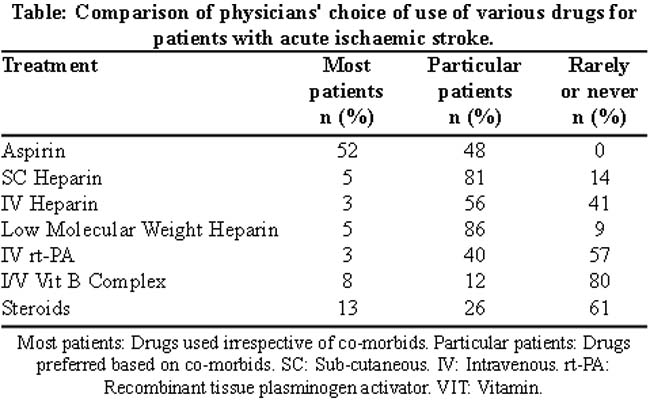 In this table the terms "most", "some", "rarely or never" are used based on whether or not the frequency of administration of these drugs will be influenced by the presence of various comorbids for example atrial fibrillation. Intravenous Vitamin B complex was used in most or particular situations by 12 (20%) respondents and steroids were used in most or particular situations by 23 39%) respondents. Eighteen (30.5%) respondents also mentioned Mannitol to be important in the management of stroke.
Regarding stroke patients presenting with elevated blood pressure, 35 (60%) answered that they would manage the blood pressure according to the type of stroke while 16 (28%) said they would wait for some time irrespective of the type of stroke before initiating treatment. All of these 16 (28%) respondents gave various waiting periods ranging within 48 hours from stroke onset. Four (7%) doctors opted to do nothing while 3 (5%) would immediately lower elevated blood pressure.
Forty-three (73%) responded that they would lower blood pressure when it reached more than 150/80 mm of Hg. Among these doctors the systolic value they would act on was selected as 200-220 mm of Hg by 13(30%) and 160-180 mm Hg (median and mode of 180 mm Hg) by 30 (70%). The diastolic value they thought significant enough to act on was mostly 100 mm Hg, 18 (43%) with most answering in the range of 100-120 mm Hg, 41 (95%) The most favoured antihypertensive drugs were angiotensin converting enzyme inhibitors (ACEI) (preferred by 40 (68%) doctors) followed by a diuretic (preferred by 12 (20%), while the beta blockers and calcium channel blockers being the least favoured with only 10 (17%) doctors opting for them. Thirteen (22%) selected various combinations of antihypertensives and the most common combination selected was AceI / diuretic 7 (54%) followed by AceI / beta blocker combination 5 (38.4%).
Fifty two (88%) doctors answered that they would use cholesterol lowering drugs in the emergency management of stroke patients. Amongst those who chose to recommend statins, the most favoured was simvastatin, closely followed by atorvastatin.
Twenty nine (49%) said that they will use cholesterol lowering drugs if blood cholesterol was greater than 195 mg/dl while 12 (21%) opted to use them when blood levels exceeded 156 mg/dl (Figure-2). 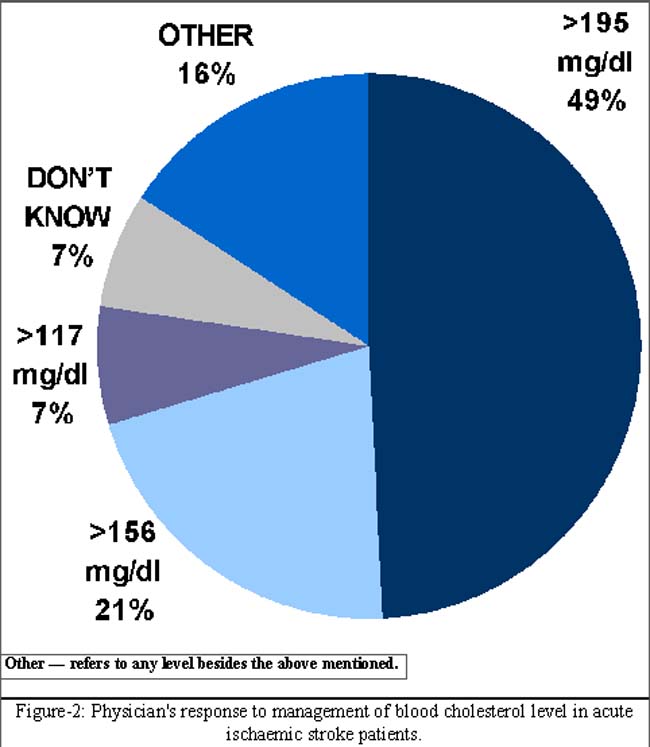 Fifty-seven (97%) doctors stated that they would also recommend rehabilitation for a stroke victim.
Most 47 (80%) physicians said they would treat a stroke patient in an emergency without delay while some 7 (12%) opted to refer them to another doctor without administering any medication. Fifty-eight (98%) respondents were of the opinion that time was critical when it comes to managing stroke victims. When asked what time window was important in managing ischaemic stroke patients, 43 (74%) clinicians opted for 3 hours or earlier. When asked about significance of separate stroke units in the management of stroke patients, 52 (88%) respondents believed that there should be Stroke Units as they would prove to be more beneficial.
Almost all respondents 58 (98%) answered that they would perform a swallowing assessment on the patient. In patients unable to take adequate food or fluid orally, 49 (83%) responded that they would initiate enteral feeding. 27 (46%) answered that they would start enteral feeding within 24 hours while 20 (34%) said they would start between 24 to 48 hours.

Our study reflects the practices of most public sector institutes. It highlights the fact that regular update of knowledge of treating physicians is of pivotal importance. The international guidelines for the management of stroke should be adopted in the hospitals and practice of outdated management protocols should be discouraged. There is need of protocol development with local resources and keeping the physicians updated can be concluded. Establishing a stroke team and unit is recommended to expedite assessment, performance of diagnostic studies and decisions for early management at all institutes.