Coagulation abnormalities in patients with chronic liver disease in Pakistan

The liver plays a central role in the maintenance of haemostasis. It serves as the site of synthesis of all clotting factors and their inhibitors. Thus liver damage from chronic liver disease can develop multiple coagulation abnormalities that disturb the balance between clotting and fibrinolysis. The causes are multiple: quantitative and qualitative platelet defects; decrease production of coagulation and inhibitor factors; vitamin K deficiency; synthesis of abnormal clotting factors; decreased clearance of activated factors; hyperfibrinolysis and disseminated intravascular coagulation.1 These coagulation abnormalities can predispose patients from minor localized bleeding to massive life-threatening haemorrhage or thrombosis formation.2
Coagulation abnormalities in chronic liver disease usually measured through the prolongation of first-line global screening tests such as the prothrombin time (PT) and the activated partial thromboplastin time (aPTT).3 The PT consists of the time needed for the platelet-poor plasma to clot after the addition of tissue extracts (thromboplastin) and calcium chloride. Whereas aPTT is the time needed for the platelet-poor plasma to clot when mixed with a particulate or soluble activator of the contact coagulation factors (factor XII, pre-kallikrein and high-molecular-weight kininogen) and negatively charged phospholipids such as platelet substitutes.4 PT determines vitamin K dependent extrinsic factors VII, X, II, V and fibrinogen. The aPTT measures the activities of intrinsic and common pathways of coagulation cascade most sensitive to factor VIII, IX, XI, XII and those of the contact system.5 The clotting factors measured by the common screening test are in the normal range until plasma levels of procoagulants would be reduced below 30 to 40%.1
The prolonged PT is related to the severity of liver failure and is one of the parameter used in commonly used prognostic indices of chronic liver disease such as Child-Pugh or Mayo End-Stage Liver Disease (MELD) scores.6,7 The PT is considered as a simple, inexpensive, qualitative and accurate prognostic marker of liver impairment and also a predictor of bleeding.1 The degree of PT impairment an expression of decreased liver synthesis predicts the severity of portal hypertension and the presence of esophageal varices.6 PT is related both to bleeding risk and mortality. Patients with moderately or severely prolonged PT have 5 to 10 fold higher mortality rates than patients with normal PT.8 The aPTT is also prolonged in advance chronic liver disease.9
Thrombocytopenia is a common feature of chronic liver disease and is seen in 30 to 64% of cirrhotic patients.10,11 Splenomegaly secondary to portal hypertension is considered the main cause of low platelet count in cirrhosis. The relationship between portal hypertension and thrombocytopenia is documented by the association between a low platelet count and the presence of gastrointestinal bleeding.12,13
Fibrinogen level is also considered as an evidence of increased fibrinolytic activity. Fibrinogen increases bleeding tendency in patients with chronic liver disease. Fibrinogen levels are within normal range in patients with stable chronic liver disease but decreased levels are found in patients with advance cirrhosis.1
In this study coagulation abnormalities among patients with chronic liver disease were investigated using PT, aPTT, platelet count and plasma fibrinogen level. This study also reported the relationship between abnormal haemostasis test and the risk of GI bleeding in CLD patients in Pakistan.

This hospital based prospective study was carried out at Liaquat University Hospital, Jamshoro during Nov 2004 - Oct 2005. Data was collected from clinically CLD suspected patients who were admitted in the medical ward during the study period. A comprehensive history including presenting complaints, past history, family history, drug history was taken by asking questions through a structured questionnaire. Thorough, physical examination was performed and clinically CLD suspected patients were investigated for the confirmation of chronic liver disease through Liver Function Test (LFT) and ultrasound abdomen. The criteria used for the diagnosis of CLD were based on:
Presence of cardinal signs and symptoms including ascites, hepatomegaly, splenomegaly, jaundice, palmar erythema, clubbing, leukonychia, oedema, pubic hair loss, spider naevi, purpura, gynaecomastia, flapping tremors, drowsiness and coma.
Ultrasonoghaphy revealing coarse hepatic texture, change in liver size, dilated portal vein and splenomegaly.
Impaired liver function tests including raised level of alanine transaminase (ALT).
Among clinically CLD suspects, only laboratory diagnosed chronic liver disease (CLD) patients, of either sex having age 15 years or above, were included in the study. We excluded patients having other haemostatic abnormalities (aplastic anaemia, leukaemia, lymphoma, sepsis and vasculitis), drugs used (sulphonamides, penicillin, cephalosporin, thiazide and cytotoxic drugs), and congenital clotting factor defects (haemophilia, afibrinogenaemia, factor V and XI deficiencies). Informed written consent was taken from all selected individuals before including them in the study. All selected CLD patients were investigated for coagulation abnormalities by determining their prothrombin time (PT), activated partial thromboplastin time (aPTT), platelet count and plasma fibrinogen level. All clotting tests were performed at Liaquat University hospital research laboratory, Hyderabad.
Clotting tests (PT and aPTT) were performed on manual-tilt method. Hemostat reagents (Hemostat thromboplastin-SI kit for PT and Hemostat aPTT-EL kit for aPTT) and controls (Hemostat Control plasma) manufactured by HUMAN GmbH, Wiesbaden, Germany) were used. Plastic disposable syringes, siliconized glass test tubes and pipettes were used. For PT and aPTT, blood was drawn into the evacuated anticoagulant test tube (nine parts of freshly collected blood with one part of sodium citrate).14 The blood was centrifuged for 15 minutes and the plasma was transferred into the clean siliconized glass test tubes. A reagent cephaloplastin (Phospholipid plus ellagic acid as an activator) was added for aPTT and tissue factor (also known as factor III or thromboplastin) for PT and then test tubes placed at 37ºC in the waterbath for 3-5 minutes followed by addition of pre-warmed (37ºC) calcium chloride (0.025M). Time start was begun, by gently shaking the test tube back and forth and continually looking for clot formation. Immediately upon formation of a fibrin clot, timer was stopped and time recorded (the time the sample took to clot) in seconds. Platelet count was determined through automated haematology analyzer (Sysmex KX-21, manufactured by Sysmex Corporation, Kobe, Japan). It determines the platelet count automatically with other haematology parameters in few minutes after whole blood sample (50 µL) was sucked through suction inlet (nozzle). Plasma fibrinogen level was assayed through clauss method (which uses thrombin to convert fibrinogen to fibrin, followed by measurement of fibrin in the clot) by using a commercial kit (Hemostat fibrinogen kit), manufactured by HUMAN GmbH, Wiesbaden, Germany.15
Study results were analyzed by using statistical package for social sciences (SPSS) version 16 software. Simple frequencies, percentages and association was seen between abnormal clothing tests and gastrointestinal bleeding among CLD patients by calculating relative risk (RR) with 95% confidence interval.
Ethical Approval: Ethical approval for the study was taken from the Ethics Review Committee (ERC) of the Liaquat University of Medical and Health Sciences, Jamshoro. 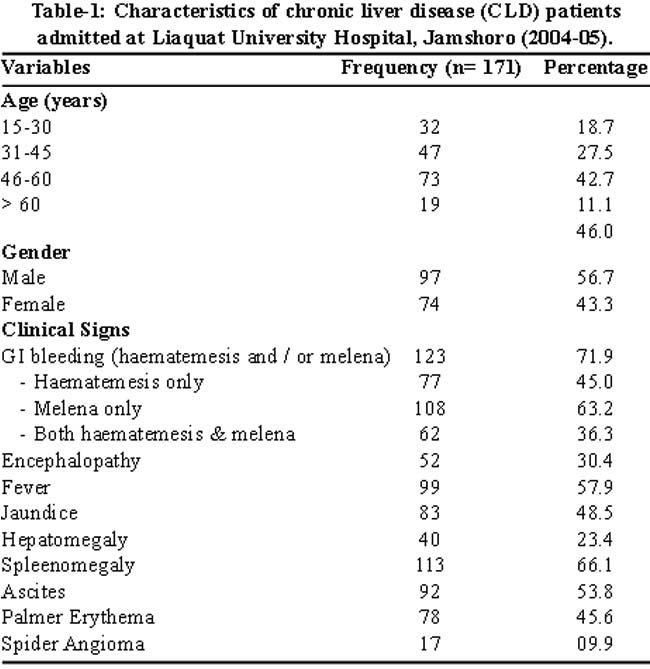 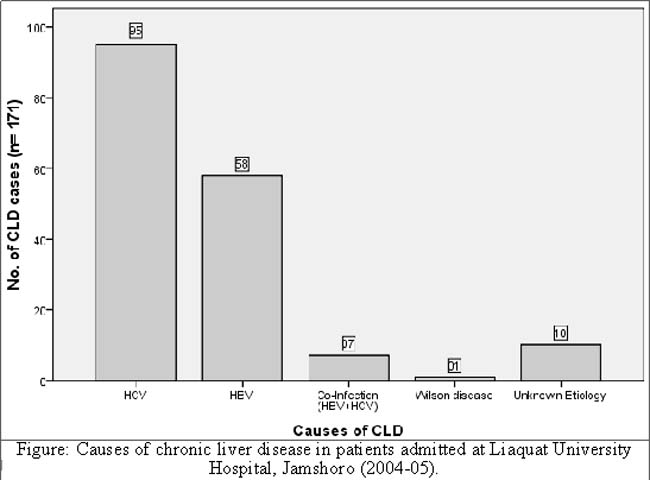 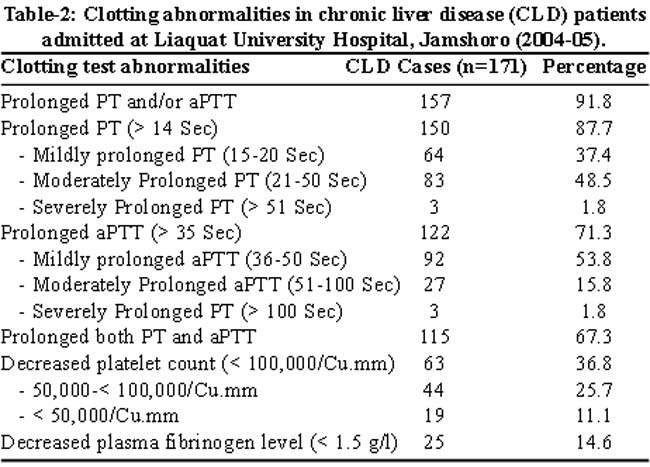 This study revealed that males suffer slightly more with chronic liver disease than females (male/female ratio was 1.3:1), more so, in the middle age group between 46-60 years. Almost, in 90 percent cases, the cause of CLD was hepatitis B and C virus infection. Hepatitis C virus infection (56%) was most common followed by hepatitis B (34%) virus. Similar, results were reported in a study conducted at military hospital Rawalpindi that reported 86 % cause of CLD was HBV (25%) and HCV (61%).16
Prolong PT has been associated with an increased risk of gastrointestinal bleeding in chronic liver disease.17-19 This, study reported that majority of CLD patients had raised PT (n=150) and presented with GI bleeding (72%). Although relative risk of GI bleeding with elevated PT was not statistically significant. Elevated aPTT was also not found to be associated with GI bleeding in this study. Possible explanation for this result may be because of their limitation, PT and aPTT only measure procoagulants factors, they do not measure anticoagulants factors (protein C and antithrombin) and the normal haemostasis is the strict balance between procoagulant and anticoagulant factors.3 Other likely causes of prolonged PT are oral anticoagulation, vitamin K deficiency and for prolonged aPTT are heparin contamination and non-specific inhibitors (lupus coagulants).5 Nevertheless, these parameters do give a good estimate of the synthetic function of the liver and may still be used as a prognostic marker.6,7
This study, also reported moderate thrombocytopenia (i.e. platelet counts less than 100,000 per cu mm) in one-third cases (37%) of chronic liver disease patients. Most likely cause of thrombocytopenia in CLD was an increased platelet sequestration in the spleen due to congestive splenomegaly secondary to portal hypertension. Decreased production of thrombopoietin by the diseased liver was also suggested to contribute to the low platelet count in CLD patients.2 A positive relationship between moderately decreased platelet count and the presence of gastrointestinal bleeding was found in this study. Similar, findings were reported in previous studies.12,13
Decrease plasma fibrinogen level related with GI bleeding was also reported in the study. Hypofibrinogenaemia was seen in advance CLD cases. This may be due to impaired synthesis, loss into extravascular spaces (ascites), and increased catabolism or due to massive haemorrhage.5
Bleeding is a frequent and often severe complication of liver cirrhosis. The most frequent and potentially life-threatening site is the gastrointestinal tract. Haemodynamic alterations secondary to portal hypertension are considered the main cause of GI bleeding in cirrhotics.20,21 Non-haematological factors may also contribute to the bleeding diathesis in chronic liver disease. These include portal hypertension, renal failure and bacterial infection.22
Thrombocytopenia and hypofibrinogenaemia were found related with GI bleeding among CLD cases. Whereas PT and aPTT were not adequately reflecting the relation with GI bleeding. Still, these parameters (PT and aPTT) are being used as prognostic markers. More, studies would be required in improving our understanding of the bleeding diathesis associated with chronic liver disease. Particularly about anticoagulants factors which are not measured by PT and aPTT and thus help in the appropriate and effective management of these patients.

The authors sincerely thank all chronic liver disease patients, who were admitted during the study period in medical ward of Liaquat University Hospital Jamshoro and took part in the study. Authors also acknowledge the medical ward staff, research laboratory of the hospital for the tests and finally Liaquat University of Medical and Health Sciences, Jamshoro for supporting the study.