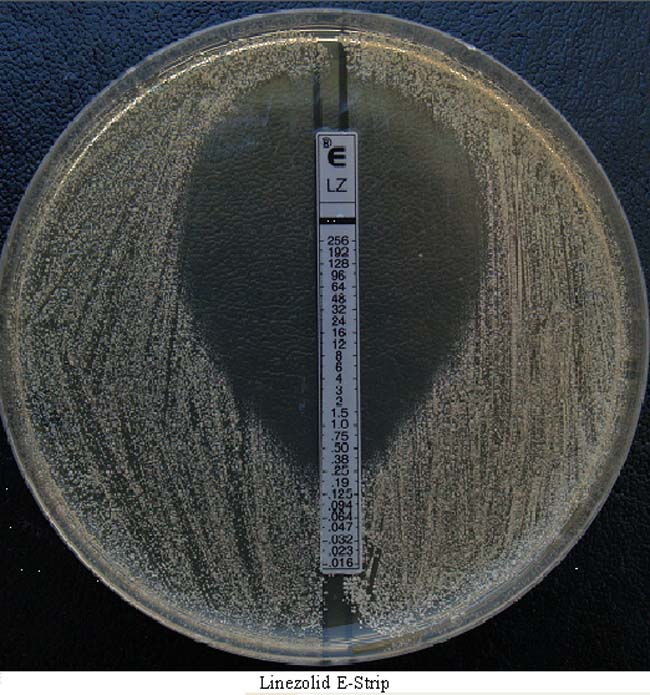 First an inoculum was prepared according to 0.5 McFarland turbidity standards (106 cfu/ml). After inoculating the isolates onto the Muller Hinton agar, E-strips of vancomycin and linezolid were applied over it and incubated along with controls for 18-24 hours at 37ºC aerobically. The MIC results were interpreted according to criteria set by Clinical and Laboratory Standards Institute (CLSI).17 For vancomycin, isolates with MIC of < 2 µg/ml were considered susceptible, isolates for which the MIC was 4-8 µg/ml were intermediate and isolates with MIC > 16 µg/ml were considered resistant. Regarding linezolid isolates with the MIC of < 2 µg/ml were considered susceptible.17 Methicillin resistant Staphylococcus aureus ATCC 33591 and methicillin sensitive Staphylococcus aureus (MSSA) ATCC 25923 were used as control strains.

Among a total of 50 MRSA isolates all were sensitive to both the drugs used but vancomycin showed comparatively higher MICS than linezolid. The MIC 50 and MIC 90 of both were calculated and compared. The range of MIC of Vancomycin and Linezolid against MRSA were 0.25-2ug/ml and 0.023- 0.75ug/ml respectively. MIC 50 of vancomycin and linezolid were 0.75ug/ml and 0.25ug/ml respectively. Results of MICs are represented in Table-1 and Figure. 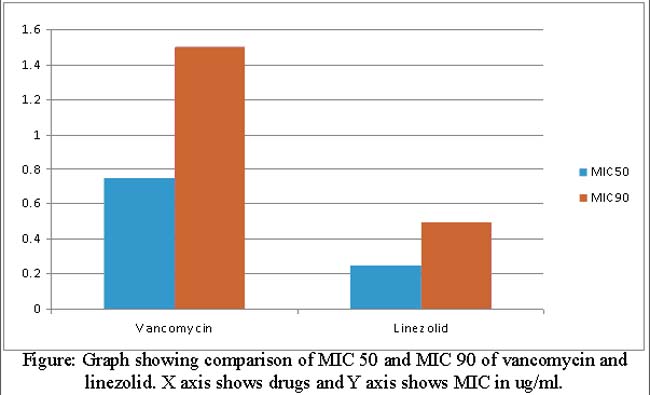 Most of the MRSA isolates were retrieved from pus samples followed by nasobronchial lavage and urine (Table-2).

MRSA is one of the major nosocomial pathogens causing significant morbidity and mortality. The important reservoirs of MRSA in hospitals/institutions are infected or colonized patients and transient carriage on the hands of health care workers.4,5,10 In Pakistan, the significance of MRSA had been recognized relatively very late and it emerged as a problem in the1980s and in the 1990s. Epidemic strains of these MRSA are usually also resistant to several other commonly used antibiotics. During the past 15 years, the appearance and world-wide spread of such clones have caused major therapeutic problems in many hospitals, as well as diversion of considerable resources to attempts at controlling their spread.
Vancomycin has been the treatment of choice for methicillin-resistant Staphylococcus aureus (MRSA) infections. This agent, however, requires intravenous (IV) administration, continuous monitoring of levels and occasionally patients experience some unacceptable side effects. Linezolid, a member of the new oxazolidinone class of antibiotics, is highly active in vitro against MRSA and has excellent oral bioavailability and does not require monitoring of levels. Cumulative data indicates that linezolid and vancomycin have similar efficacy against MRSA infections.
A study carried out in USA in year 2005 indicated that intravenous or oral linezolid was well tolerated and is realatively superior to vancomycin in treating patients with MRSA-infected surgical-site infections and no dose adjustment for renal dysfunction patients is required.18 Our results are also comparable with a study carried out in Iran in 2009 which indicated that vancomycin and linezolid have same activity against MRSA.19 A study carried out in University of Health Sciences Lahore also concluded that Linezolid has a very good bacteriostatic activity against a broad range of multidrug resistant Gram-positive bacteria, including MRSA.20 A study conducted in Japan indicated that linezolid was very effective for the treatment of patients with pneumonia and sepsis caused by MRSA and may be better than vancomycin in achieving microbiological eradication in patients admitted in intensive care units.21 Occasional thrombocytopenia was associated with linezolid use, but it was mild and reversible on treatment completion and had no serious clinical implications and is only present in 2% of the patients getting treatment.21

This study suggests that linezolid and vancomycin have similar in vitro efficacy for MRSA infections. Linezolid\\\'s oral dosing option may allow earlier discharge of hospitalized patients thus reducing bed occupancy, over head charges and is a cost effective option from patient\\\'s point of view. The excellent in vitro activity of linezolid, its reported in vivo effectiveness and fewer side effects renders it an important therapeutic alternative to vancomycin in the treatment of methicillin resistant Staphylococcus aureus infection.