Diagnostic value of Serum Procalcitonin Levels in children with meningitis: a comparison with blood leukocyte count and C-reactive protein

Meningococcal septicemia and meningitis remains is an important cause of morbidity and mortality in children despite the advent of highly effective bacterial conjugate vaccines. There is now good evidence that mortality from this disease is falling, but a high index of suspicion, prompt diagnosis, and aggressive management are essential to reduce mortality and morbidity.1 It is becoming increasingly difficult to confirm the diagnosis of meningococcal infection by conventional microscopy and culturing techniques.2
Procalcitonin, which is a calcitonin propeptide, is supposed to be synthesized in C cells of the thyroid gland and secreted from leukocytes of the peripheral blood. The secretion of PCT was found to increase in the presence of bacterial lipopolysaccharides and cytokines that are associated with sepsis.3 In healthy subjects, circulating levels of PCT are below detection limits, increasing in patients with bacterial infections. Production of procalcitonin in the body during inflammation is linked with bacterial endotoxin and with inflammatory cytokines interleukin-6 and tumor necrosis factor (IL6 and TNF).3 The increase of procalcitonin level is minimal in patients infected with viruses. In health, circulating concentrations of procalcitonin is very low, usually below 0.01 ng/ml and in viral infection and inflammation, the concentrations increase slightly but rarely above 1.0 ng/ ml.4 It increases dramatically and quickly after single endotoxin injection, and this response is very rapid and the molecule is stable, making it a potentially useful marker for distinguishing bacterial from non bacterial infection.5
The present study was conducted to determine the level of serum procalcitonin, blood leukocyte count (TLC) and C-reactive protein (CRP) in children with bacterial and non bacterial meningitis and document their efficacy in differential diagnosis. Also described are procalcitonin levels over the time during the treatment of acute bacterial meningitis.

Thirty eight most likely meningitis children patients (22 males and 16 females), with ages ranging from 2 months to 10 years attending the paediatric departments of Al-Jedaani Hospital, Jeddah, KSA in the period from March 2005 to February 2008 were included in this prospective study. The demographic and clinical characteristics of patients were recorded on admission. Meningitis was diagnosed according to history, physical examination, CSF laboratory findings, identification of bacterial agents in CSF gram staining and cultures. The studied patients were categorized according to the CSF bacteriological and cytochemical profile into the following two groups: Group I (Bacterial meningitis) comprised18 patients (10 males and 8 females), with ages ranging from 2 months to 10 years (mean age 4.3 ± 3.1 years). Meningitis was defined as bacterial if the CSF laboratory findings showed: (increased protein >2g/l, decreased glucose ratio <0.4, leukocyte count > 1500 × 106/l and polymorph nuclear leukocyte domination), identification of bacterial agents in gram staining and/or positive bacterial culture; and Group II (Non bacterial meningitis): included 20 patients (12 males and 8 females), with ages ranging from 2 months to 9 years (mean age 3.7±0.9 years) Patients were included in this group if no bacteria were documented on Gram-stain or bacterial culture of CSF, lymphocyte predominance of CSF cells, reduced protein level, and increased glucose ratio >0.5.5
Patients presenting with a further site of infection in addition to meningitis, or who had received prior antibiotic treatment for more than 2 consecutive days, were excluded from the study.
Our study was approved by the clinical ethics committee of the hospital and performed according to ethical procedures. A written informed consent was obtained from parents for the participation in our study.
All patients were subjected to full history, thorough clinical examination and the following tests: complete blood count, C-reactive protein, serum procalcitonin, and CSF cytochemical study and bacterial culture; i) Blood samples for procalcitonin measurement, C reactive protein, and leukocytes count were taken at time of admission (day 0), after 72 hrs (day 3) and after 6 days (day 6). Blood samples for procalcitonin were taken from the waste of blood taken for routine investigations. ii) Lumbar puncture was done by the anaestheologist before starting the initial antibiotic to detect total and differential leukocyte count, assay of proteins and glucose and for bacteriological study (gram staining and cultures and sensitivity).
Measurement of Complete blood count: It was done as a part of routine laboratory test by Cell- Dyne 1600 System (Abbott Park Laboratories, Ilinois, USA).
Measurement of serum Procalcitonin levels: An immunoluminometric assay (Brahms Diagnostica, Berlin, Germany) was used for the specific measurement of PCT in serum (detection limit, 0.10 ng/mL) according to the instructions of the manufacturer. The assay uses two antigen-specific monoclonal antibodies that bind PCT at two different binding sites. Luminescence was measured automatically by an analyzer (Behring Diagnostics, Marburg, Germany), and results were calculated using the software provided. Inter-assay and intra-assay variability were < 7% and 7%, respectively. At room temperature, the stability of PCT can be observed regularly in blood samples and can be measured together with routine variables. The results of Serum PCT can be obtained in 2 hours and only 20 µl of serum is needed.5
C-reactive protein was measured by enzymatic heterogeneous sandwich immunoassay. According to the manufacture manual (Vitro 950 analyzer, Johnson and Johnson, Rochester, New York, USA), It is a latex agglutination test for qualitative and semi-quantitative determination of CRP in serum. It is based on the immunological reaction between human CRP in the serum and the corresponding antihuman CRP antibodies bound to latex particles. The positive reaction is indicated by a distinctly visible agglutination of the latex particles in the test cell of the slide.
Statistical Analysis:
Descriptive statistical tests were expressed as mean ± standard deviation. The differences between the groups were evaluated using the non-parametric Mann-Whitney U test and correlation coefficient (r) with the threshold of significance set at P < 0.05. 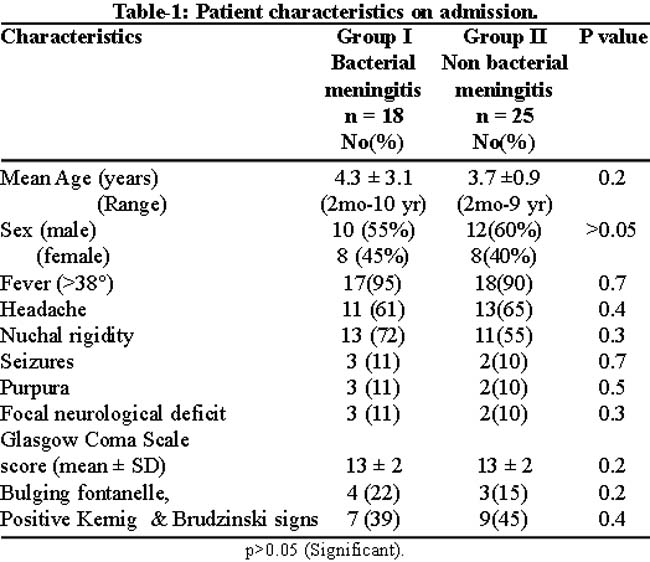 and shows that, there were no statistical differences in patient\\\'s demographic and clinical characteristics at time of admission. The type of organisms yielded from bacterial cultures of CSF are; Neisseria meningitides (five patients), Streptococcus pneumonia (five patients), Haemophilus influenza-b (four patients), E-coli (two patients), and Staphylcoccus aureus (two patients). The differences in the mean values and ranges for CSF parameters [cells, CSF protein levels, and CSF glucose/blood glucose ratio], blood leukocyte, CRP and procalcitonin levels between both groups are highly statistically significant between both groups for any of the items studied in the CSF or blood. However, a wide zone of overlapping values for all items was found between both groups. 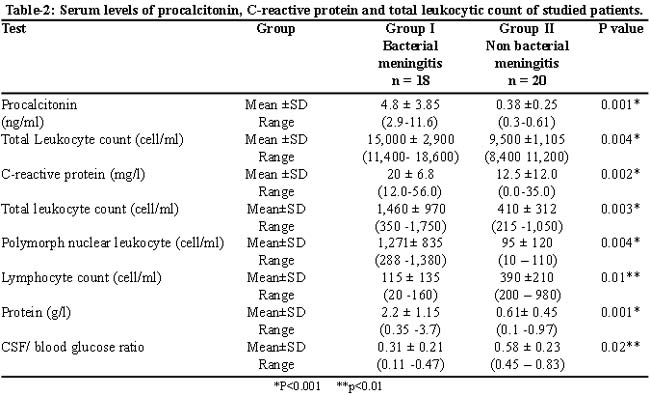 Table-3 shows that there is a positive correlation between serums PCT, TLC and CRP in bacterial positive and negative meningitis but this relation becomes highly significant with bacterial meningitis group.

Table-5 shows follow up of mean ± SD of serum procalcitonin levels, leukocyte count and CRP levels (on admission, day 3 and day 6) during treatment of 15 patients with bacterial meningitis. A marked statistical significant reduction of procalcitonin levels (mean 0.40±0.2 ng/ml with p< 0.001) was noted on day 6 when compared with mean procalcitonin levels on admission (mean 4.8±3.85 ng/ml). No statistical significant difference with leukocyte count and CRP was seen on follow up.
The remaining 3 bacterial meningitis cases were transferred to government hospital for continuation of management as requested by their parents.