Objective: To retrospectively assess the therapeutic effectiveness and safety of transjugular intrahepatic portosystemic shunt (TIPS) in patients with portal hypertension related complications.
Methods: Over a period of 7.5 years 19 patients (10 males and 9 females, age range 25-69 years) were referred for TIPS at our radiology department. Thirteen patients suffered from liver cirrhosis while 6 had Budd Chiari syndrome. All patients were evaluated with colour doppler ultrasonography and cross sectional imaging. Shunt procedures were performed under sedation or general anaesthesia through internal jugular approach. Metallic self expandable uncovered stents were placed in 15 patients and covered stent in 1 patient. Follow up of patency was evaluated with ultrasound in majority and by venography in some patients. Safety of the procedure and clinical outcome were analyzed.
Results: Indications of procedure included variceal bleeding (n = 8), ascites (n = 4), ascites and bleeding (n=1) and Budd-Chiari syndrome (n = 6). Technical success rate was 84.21%. Complication rate was 10.53%. Three days mortality was 15.79 %. Mean primary shunt patency was 306.62 ± 533 days. During follow-up stent occlusion occurred in 5 patients (31.25%). Four of these patients underwent successful reintervention. Recurrence of symptoms occurred in 68.75% patients.
Conclusion: TIPS is useful for management of complications of portal hypertension that are refractory to pharmacological and endoscopic treatment, however shunt stenosis or occlusion may cause recurrence of symptoms. Repeated interventions are often required to maintain shunt patency.
Keywords: Interventional procedures, Portal Hypertension, Shunts, TIPS (JPMA 61:336; 2011).

The transjugular intrahepatic portosystemic shunt (TIPS) is a nonsurgical percutaneous interventional procedure in which an expandable metal prosthesis is placed between hepatic vein and intrahepatic portal vein through the liver parenchyma to enable decompression of portal hypertension.
Since its introduction into clinical practice, TIPS has become widely accepted worldwide as an effective procedure for treating complications of portal hypertension.1 In addition TIPS is useful for Budd-Chiari syndrome and hepatorenal syndrome, although it\\\'s specific role in these indications remains to be definitely established. A number of trials worldwide have compared the safety and efficacy of TIPS versus medical and endoscopic treatment in management of above mentioned conditions.1
In Pakistan the incidence of hepatitis and subsequent cirrhosis is fairly high and management of portal hypertension and its sequelae poses a problem for clinicians.2 Abbas et al have observed that chronic liver disease is the commonest cause of ICU admissions and its complications are the commonest cause of all deaths in ICU.3 Although the outcome of surgical shunts for the management of portal hypertension has been studied locally in the past4 but no local data is available regarding radiological creation of intrahepatic portosystemic shunt.
In this retrospective study we evaluated the therapeutic efficacy and safety of TIPS procedure in treatment of refractory complications of portal hypertension as well as in managing Budd-Chiari syndrome by use of self-expanding metallic stents.

Retrospective data was reviewed of patients who underwent TIPS procedure at Radiology department of Aga Khan University Hospital between January 2001 and May 2008.
Study sample comprised of 19 patients (10 males and 9 females, age range 25-69 years, mean age 48.31 ± 15.19 years) who were referred to our department for TIPS placement. Sampling was performed by non probability purposive technique. Sixteen out of those 19 patients underwent successful shunt creation while the procedure was unsuccessful in 3 patients.
TIPS procedures were performed in the angiography suite on Siemens angiography machine by trained and experienced interventional radiologists. Pre procedure diagnostic work up was done with ultrasound Doppler and CT scanning. Informed consent was taken prior to the procedure from the patients or next of kin. All patients underwent complete blood count and coagulation screening tests and received broad-spectrum antibiotics. Any existing coagulopathy was corrected prior to procedure. Procedure was carried out under monitored anaesthesia care.
After puncturing the right internal jugular vein under ultrasound guidance, a 9 or 10 Fr, long sheath (Brite Tip, Cordis corporation USA) was placed. The right or middle hepatic vein was cannulated with a 4 -5 Fr angiographic catheter (RDC, C1. Cordis corporation USA). The right portal vein was then punctured by passing a long curved 16 gauge Colapinto needle (Cook Medical USA). Portal puncture was either performed under direct ultrasound guidance or by opacifying the portal vein via contrast injection in superior mesenteric artery. An alternative approach was to identify the right portal vein branch by ultrasound and putting a radio-opaque metallic marker on hypochondrium on skin at this level, puncture was then performed under fluoroscopic guidance. In few patients a wedged hepatic venogram using water soluble non ionic contrast was performed. By using this venogram as a guide, right branch of portal vein was punctured.
The portosystemic pressure gradient was measured and the intrahepatic parenchymal tract dilated over a 0.035-inch Amplatz superstiff guide wire (Boston Scientific) with angioplasty balloon. Metallic self expandable stent (WALLSTENT {Boston Scientific} or S.M.A.R.T.™ Nitinol Stent {Cordis Corporation}) was then deployed in the shunt tract. 10 x 80 mm stents were used in majority of patients. Postprocedural venography was performed to document procedure success and to rule out any immediate shunt thrombosis or stenosis (Figure). 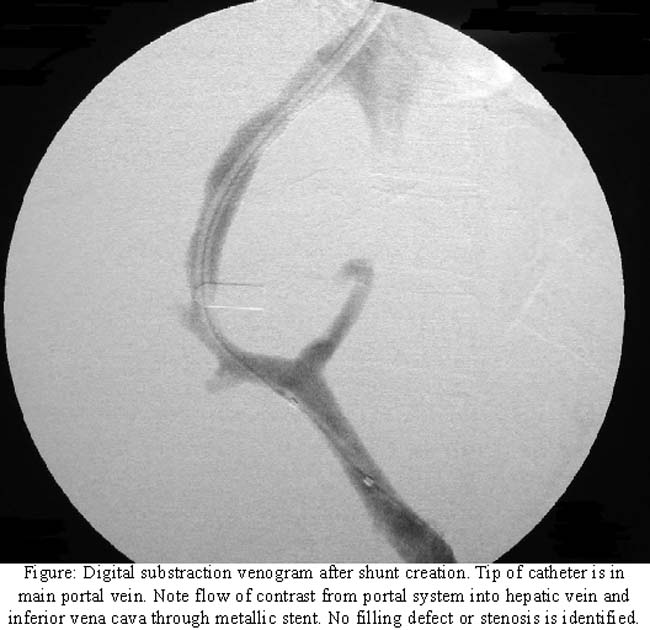 Portosystemic gradients were also measured. Right hepatic vein-portal shunt was created in 11 patients while left hepatic vein-portal shunt in 2 patients. In 3 patients, cavo portal shunts were created because hepatic veins could not be catheterized. Selective embolization of gastro esophageal varices by coils was also performed in same sitting in seven patients.
Technical success of shunt placement was defined as successful creation of shunt with satisfactory position and regular stent patency resulting in reduction in portosystemic gradient below 12 mm of Hg. In 3 patients TIPS placement was unsuccessful due to failure to cannulate hepatic veins owing to chronic occlusion and extremely hard liver parenchyma.
Major complications were defined as those requiring active management. Minor complications were defined as those which did not required active management and patient improved after observation.
Patients subsequently underwent ultrasound at 3 months and then every 6 months, or more frequently if clinically indicated. Whenever shunt occlusion or stenosis was suspected on basis of clinical assessment or ultrasound examination, further assessment was performed with angiography and angioplasty or re- stenting was performed to establish patency if required.

Out of total 19 patients, 13 had cirrhosis of liver (68.42%) while 6 patients (31.58%) were diagnosed with Budd-Chiari Syndrome. Aetiology of cirrhosis and indications for TIPS are outlined in Table-1. 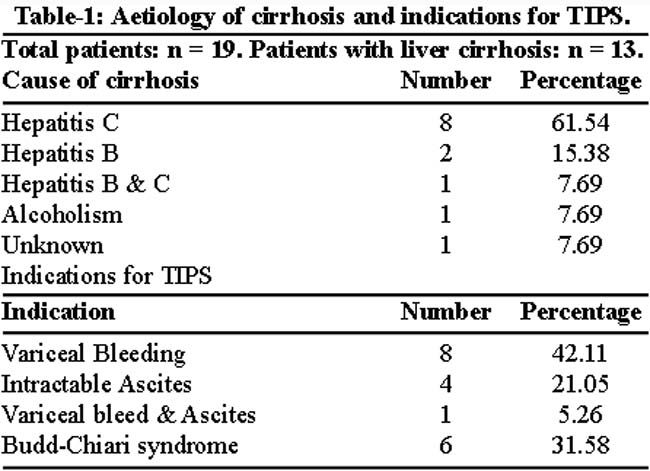 Haemoperitoneum in 1 patient was managed by blood transfusions. Transcapsular puncture of liver occurred in 1 patient with extravasation of contrast in extrahepatic space. The patient was managed conservatively. Three days mortality was 15.79 % (n = 3), Two patients died next day of procedure, 1 of them had multiorgan failure while the other patient continued to have variceal bleeding and died due to haemodynamic instability. One patient had a fatal myocardial infarction and expired after 3 days of the procedure.
Average follow-up was 312 days. Mean primary shunt patency was 306.62 days (range 3-1801 days). During follow-up stent stenosis or occlusion occurred in 31.25 % (n = 5). 2 patients underwent successful angioplasty while in other 2 patients shunt patency was satisfactorily restored by re-stenting. In 1 patient the attempt of re-intervention failed due to complete thrombosis of the TIPS stent. Multiple attempts at cannulating this stent were unsuccessful.
During follow up recurrent bleeding from varices occurred in 25% patients (n = 4) while recurrence of ascites occurred in 37.5% patients (n = 6). One patient had recurrence of both ascites and variceal bleeding.

In liver cirrhosis, portal hypertension develops due to increased sinusoidal and post-sinusoidal resistance to blood flow. Ascites and porto systemic collaterals occur as a consequence. Ascites is associated with poor quality of life, increased risks of infections and a poor long-term outcome.5,6 Bleeding from ruptured esophageal or gastric varices is the most serious complication of portal hypertension with mortality rate of approximately 30%. Patients with severe liver failure have higher mortality.7,8
Idea of mechanical decompression of the portal system laid the basis of use of portosystemic shunts as a therapy for portal hypertension. In 1969 Rösch and Hanafee9 described the technique in laboratory animals. The first human cases were presented by Richter in 1989.10 Since then the technique is evolving and many reports with variable numbers of patients, and results have been published. The procedure has now gained worldwide acceptance. It is considered an effective and life-saving tool for the management of complications of portal hypertension.11 As compared to surgical shunt creation, the procedure is noninvasive as it avoids the risk of laparotomy, has a relatively lower frequency of procedure related complications, and does not preclude future liver transplantation.7,12
In 1994, the United States National Digestive Diseases Advisory Board established a set of clinical indications for TIPS placement.13 These accepted indications are:
u Acute variceal bleeding that cannot be successfully controlled with medical treatment, including sclerotherapy.
u Recurrent and refractory variceal bleeding or recurrent variceal bleeding in patients who cannot tolerate conventional medical treatment, including sclerotherapy and pharmacologic therapy.
u Therapy for refractory ascites.
Unproven but promising indications include:
u Portal decompression in patients with hepatic venous outflow obstruction (Budd-Chiari syndrome), hepatic hydrothorax, or hepatorenal syndrome.
Potential complications of TIPS include transcapsular puncture and intraperitoneal bleed, haemobilia, sepsis and shunt infection, hepatic infarction and or encephalopathy and stent migration.
Although technical refinements have resulted in reduced morbidity and improved clinical success, the results of published data are variable. When preformed by trained interventional radiologists, TIPS is successful in most of the patients and is generally safe with low procedural mortality.14-17 Technical failure in 15.78% patients in our series occurred due to anatomic difficulty and extremely hard liver parenchyma which prevented acceptable portal venous puncture.
Shunt malfunction is a major limitation caused by stenosis or occlusion of the intrahepatic tract either due to intimal hyperplasia or thrombosis. This impairs the long term patency of the shunt resulting in recurrence of symptoms. Primary patency of shunts varies in different series. Punamiya14 have described primary patency rate at 1, 2, and 3 years is 25-66%, 5-42% and 21% respectively. In the data presented by Jung et al,18 primary patency rates of uncovered stents were 63%, 48%, and 24% at 3, 6, and 12 months respectively. With mean follow up of 306 days, primary stent patency rate in our series was 68.75% which is comparable to initial follow up results of Punamiya14 and Jung et al.18
Re-interventions with balloon dilation or stenting to re-establish or maintain the patency of the shunt are required in 70%-90% of patients and in 20%-40% total occlusion develops.19 Stent stenosis or occlusion developed in 31.25% patients in our study. Patency was restored successfully by angioplasty or restenting in all patients except one.
TIPS has shown favourable short-term results in controlling bleeding as compared to endoscopic therapy. Reported rates of rebleed range from 9% - 22.6%.20-22 Similarly reported efficacy of TIPS in management of refractory ascites ranges from 63% to 92%.23-25 In our study group 25% patients had recurrence of variceal bleeding during follow up. Rate of recurrence of ascites was 37.5%. High rate of symptom recurrence in our study group is possibly related to use of uncovered stents in most patients. Another possible reason is probably related to severity of liver cirrhosis. Late presentation with advanced cirrhosis in our belief is the reason for higher symptom recurrence rates.
Availability of new stents covered with polytetrafluoroethylene (PTFE) membranes has significantly reduced the rate of TIPS malfunction consequently improving quality of life and reducing the need for periodic interventions.

TIPS is useful for management of complications of portal hypertension that are refractory to pharmacological and endoscopic treatment, however shunt stenosis or occlusion may cause recurrence of symptoms. Repeated interventions are often required to maintain shunt patency.
Availability of new stents covered with polytetrafluoroethylene (PTFE) membranes has significantly reduced the rate of TIPS malfunction consequently improving quality of life and reducing the need for periodic interventions.