The importance of risk factors such as diabetes mellitus (DM), hypertension, smoking, family history of premature heart disease, dyslipidaemia, male gender and advanced age has been established in predicting the risk of cardiovascular disease (CVD) by numerous studies.1 However, in half of those who develop CVD, the established risk factors are largely absent.2 Identification of additional factors is therefore necessary to identify more effectively those at risk of CVD. Endothelial inflammatory processes have now been identified in the pathogenesis of atherosclerosis.3,4
Over the past decade, identification of novel risk factors and predictors for CVD has been an area of major interest in preventive cardiology. Serum high sensitivity C-reactive protein hs-CRP, a biomarker of inflammation, has been shown to effectively predict the risk of adverse cardiovascular (CV) events consistently.5-11 Despite its initial role as a marker of vascular inflammation, recent research has established the role of CRP in atherogenesis.12 It is involved throughout the evolvement of atheromatous lesions and is detectible even in the initial phases of plaque development.13 The currently available highly sensitive assays may detect serum CRP levels below 0.3 mg per liter. These lower range hs-CRP levels, previously considered normal, have in fact got the predictive capabilities for adverse CV events.14 It has in fact been found to be the single best predictor of future CV events among the conventional and novel risk factor.1 Its role as an important adjunct to conventional risk factors was established in 2003 according to guidelines from the Centers for Disease Control and Prevention (CDC) and the American Heart Association (AHA).15
Serum hs-CRP levels may aid in identifying patients at high risk for a first CV event who might otherwise be missed by screening for lipids and other conventional risk factors alone. The landmark "Justification for the Use of statins in Primary prevention: an Intervention Trial Evaluating Rosuvastatin" (JUPITER) trial stressed the benefits of treating individuals with raised hs-CRP levels (despite normal LDL levels) by showing a 44% reduction in cardiovascular (CV) events.16 This break-through led to the recent approval by United States Food and Drug Administration (FDA) for the primary preventive role of statins in such individuals who are at high risk for future CV events.
The Gensini scoring system is a valuable aid to estimate the severity of CAD according to angiographic findings.17 The calculation is based on the evaluation of number of stenotic segments along with their respective degrees of luminal narrowing and localization within the coronary tree. Coronary atherosclerosis is the main substrate of adverse coronary events and serum hs-CRP levels may act as an indirect measure of its extent within the coronary vasculature. This may prove to be an inexpensive screening tool in CV risk assessment. Limited information is available regarding the correlation between serum hs-CRP levels and the extent and severity of CAD, as assessed by Gensini score in patients submitted to coronary angiography. We carried out a study to assess the correlation between plasma hs-CRP levels with severity of coronary atherosclerosis.

It was a non-comparative cross-sectional study carried out from October to December 2009 at the department of Cardiology, Jinnah hospital, Lahore. The non-probability purposive sampling technique was utilized to consider 240 consecutive patients of either gender irrespective of age, presenting to the department of cardiac catheterization for coronary angiography. After excluding those with myocardial infarction (MI) within one month, malignancies, rheumatological/autoimmune diseases, chronic inflammatory disorders, acute infections and renal/hepatic compromise, 80 cases were selected for inclusion in the study based on clinical assessment and laboratory screening. An informed consent was obtained from each patient before inclusion in the study. Blood samples of the participants were sent to a centralized lab in appropriate vials for analysis of serum hs-CRP levels. Following coronary angiogram, the extent and severity of CAD were assessed using Gensini score by the consensus of two experienced interventionists. The degree of narrowing was assessed by taking into account the maximum narrowing of each stenotic lesion in at least two orthogonal views. Patients were divided into three risk groups according to hs-CRP levels (< 1 mg/L - low risk, 1-3 mg/L - average risk and >3 mg/L- high risk).
Data was entered and analyzed using \\\'Statistical Package for Social Sciences\\\' (SPSS) version 12. Categorical variables were expressed as numbers and percentages, while continuous variables were expressed as mean ± standard deviation (SD). Mean angiographic Gensini scores were compared among the hs-CRP risk groups using ANOVA as the test of significance. Direct correlation between angiographic Gensini scores and serum hs-CRP levels was also assessed using Pearson\\\'s correlation (2-tailed). A cut-off p value of < 0.05 was set for results to be statistically significant. 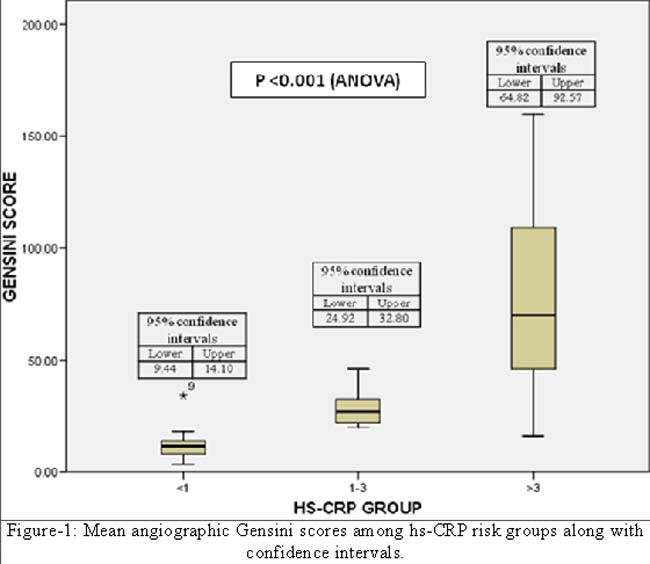 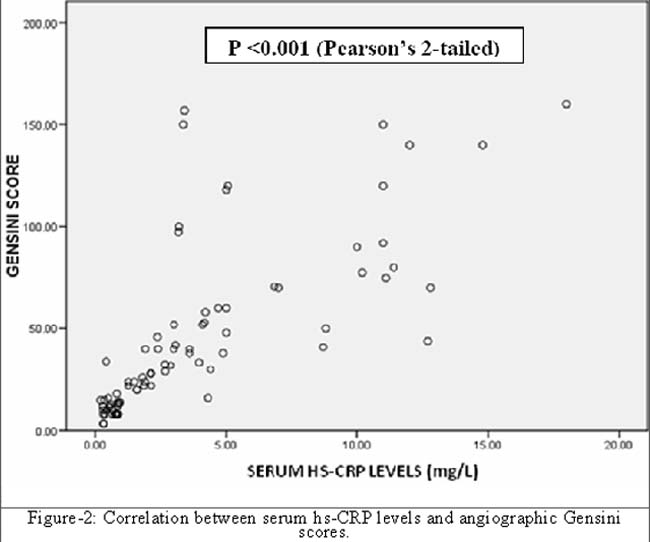 Besides the degree of stenosis, the Gensini scoring system gives ample weightage to the proximity of lesions within the coronary tree, the lesions in left main coronary artery getting the maximum score. The overall score thus reflects not only the product of number of lesions with their respective degrees of stenosis, but also the functional significance of lesions in terms of the area of myocardium at stake. Our study showed reasonable variation in mean hs-CRP levels according to the severity of coronary atherosclerosis as assessed by the Gensini score.
Elevated CRP levels were correlated with the complexity of coronary artery lesions by Moukarbel et al who found elevated CRP levels in 56%, 84% and 93% of cases with low, intermediate and highly complex coronary lesion groups respectively.18 There have also been attempts to link serum hs-CRP levels to the vulnerability of coronary plaques in terms of plaque ulceration and inflammation. Espligureal R et al reported significantly higher hs-CRP levels in patients with acute coronary syndrome compared to chronic stable angina (p=0.004).19 Evidences like this emphasize the importance of plaque morphologies in addition to the extent of coronary atherosclerosis. The issue was addressed recently in the study by Peppes et al in which significant positive correlations were found between angiographic findings, extent of myocardial damage and serum levels of myocardial enzyme and inflammatory biomarkers.17
The effect of statins on hs-CRP levels may act as a major confounding factor, however in our study the mean hs-CRP levels did not differ in those on statin therapy than those without (p = 0.88). Despite the statistically significant results of this study, larger cohorts are required in local settings to assess the relationship of hs-CRP levels with the severity of coronary atherosclerosis in local settings. The coronary angiographic assessment is based upon luminal assessment and lacks plaque visualization. Intravascular ultrasound (IVUS) based assessment of coronary atherosclerotic burden in correlation with hs-CRP levels may be an area of interest for future investigation.

Comparison of students and facilitators’ perception of implementing problem based learning