A 52 years old lady presented to the casualty department with a two day history of progressive difficulty in breathing. and a 12 hour history of difficulty in speaking and SW allowing. On examination, she was found to be in distress, inspiratory stridor and a raised respiratory rate. There was slight intercostals recession, but she was not cy anosed. The patient was pyrexial and there was a bulge of the soil palate and the tonsil on the right side, causing obstruction to the airway There was no palpable mass on examination of the neck. Her white cell count was raised. A diagnosis of an obstructive inflammatory mass was made and she was given intravenous steroids and antibiotics. Since her condition did not improve after few hours of observation and due to increasing hypoxia on blood gas analysis, she was taken to operating theatre, and tracheostomy was done under local anaesthesia, which relieved her airway obstruction. A plain arid post contrast CT Scan of the neck (Figure Ia and Ib) 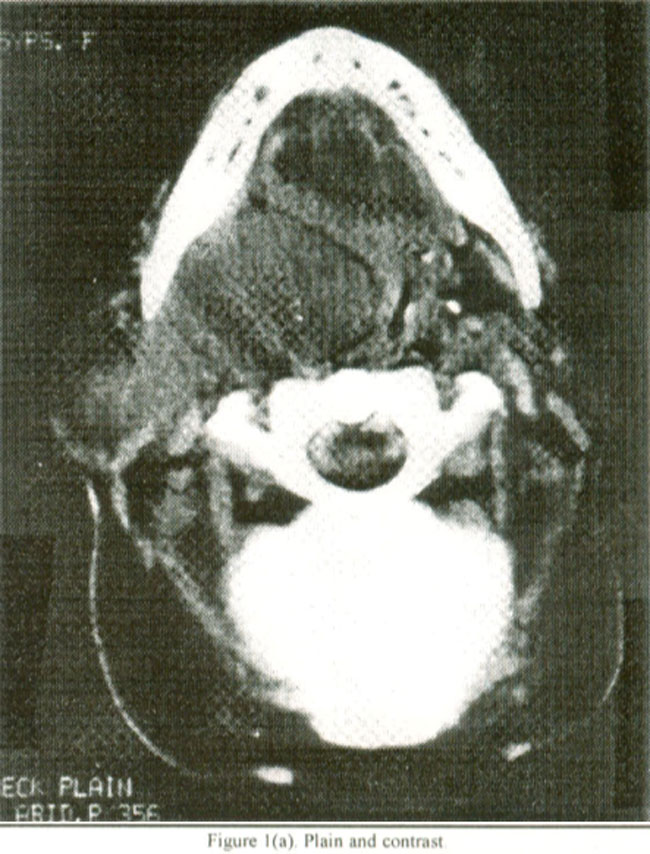 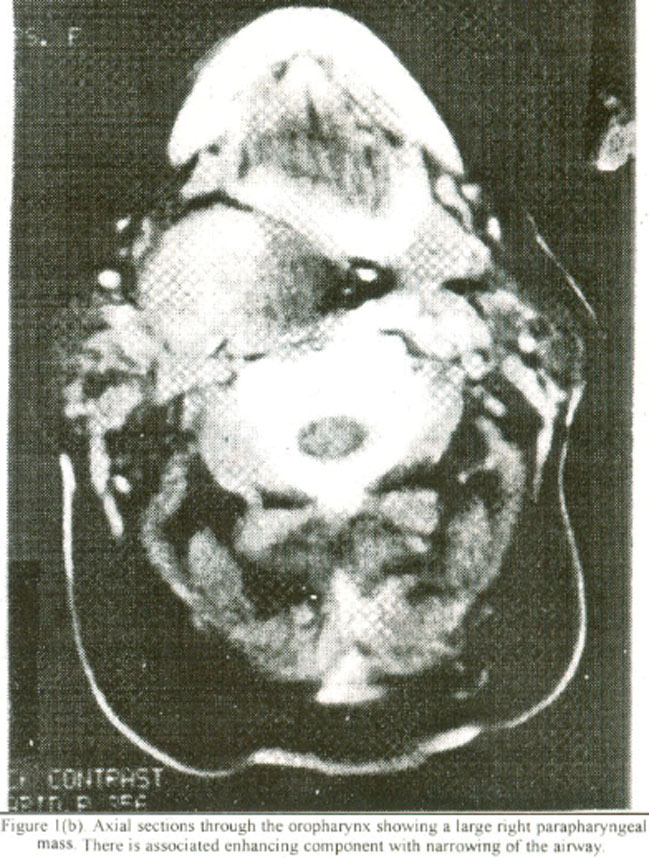 showed a large parapharyngeal mass on right side with significant mass effect. The oropharyngeal airway was significantly compromised. The mass showed an associated area of intense contrast enhancement suggestive of a vascular lesion. Fine needle aspiration cytology under ultrasound guidance confirmed its vascular origin most likely a haemangiocytoma. Because of CT Scan and FNAC reports, carotid angiography was done, which showed mass effect and displacement of carotid vessels without any abnormal vascularity. The tumor was explored via a trans-parotid trans- cervical approach. Facial nerve and its branches were identified and preserved. The tumor was found to be arising from the deep lobe of the parotid gland, which was removed. Histopathology showed the mass to be a pleomorphic adenoma. Following removal of the tumor she made a full and uneventful recovery. A five-year follow-up showed no evidence of recurrence.

Among the primary para-pharyngeal space tumors, 80% are benign and 20% malignant5. The most common tumors are salivary gland neoplasms. Neurogenic tumors, primarily neurilemomas and para-gangliomas, are the second most frequent group of neoplasms. Para-pharyngeal space tumors generally present as asymptomic masses. The tumors must grow to at least 2.5 to 3.0 crns. before it can be detected clinically6. These tumors are often misdiagnosed as infections or tonsil tumors7. Several reports8,9 describe obstructive sleep apnoea symptoms secondary to parapharyngeal space lesion. As tumors enlarge, they may compress the lower cranial nerves, causing hoarseness, dysphagia, dysarthria or Homer’s syndrome. For a benign tumor to cause nerve deficits, it must generally enlarge to a considerable size.
Fine needle aspiration cytology may be helpful for evaluating parapharyngeal space masses. Allison et al7 found reliable results with pleomorphic adenomas only. Magnetic reasonance imaging currently provides the most useful pre-operative information about the tumor extent and its relationship to the surrounding structures10,11. Magnetic resonance imaging has the advantage over computed tomography in clearly outlining the position of the carotid artery relative to the tumor and providing imaging data in the coronal, sagittal and transverse planes. Angiography should be done when carotid artery involvement is suspected, in paragangliomas and for highly vascular tumors. In our, case angiography was done because there was minimal enhancement on CT scan and suspicion of a vascular tumor on fine needle aspiration cytology. The accepted method of removal of the majority of parapharyngeal masses is via an external approach, in order to get good exposure.
Various surgical approaches to the parapharyngeal space tumors have been described in the literature1,6,7,12,13. In recent years, the transparotid- cervical approach for parapharyngeal tumors has been very effective. We employed this approach and found it very satisfactory as far as exposure and complete removal of the tumor was concerned.
Figure 1. Plain (a) and contrast (b) axial sections through the oropharynx showing a large right parapharyngeal mass. There is associated enhancing component with narrowing of the airway.