Introduction:Vitamin A deficiency (VAD) causes blindness of 250,000 to 500,000 children annually, around the world. It also increases the risk of morbidity and mortality due to other diseases. Pakistan is categorized in the ‘Severe Sub-Clinical Deficiency’ group. A mass supplementation program has been started in 1999.
Aim:To determine the coverage of vitamin A supplements in children under five years of age. and to assess the incidence of symptoms related to hypervitaminosis A.
Setting:Block I-A of Gulshan-e-Sikanderabad.
Methodology:A survey was conducted, using the fourth year MBBS students of Ziauddin Medical University (ZMU), under faculty supervision. A pre-tested structured questionnaire was used to assess coverage and symptoms of toxicity.
Results:Data was obtained on 489 children. The coverage of polio and vitamin A supplementation was 88% and 74.8%, respectively. In all 15 children (4.4%) experienced symptom of toxicity related to vitamin A supplementation.
Conclusion:Although vitamin A supplementation can save lives, it is only a short term measure. What is needed is a multi-strategy approach including short and long term strategies (JPMA 51:247;2001).

Protein Energy Malnutrition has been the focus of attention for Public Health Professionals for many years, but vitamin A deficiency disorders (VADD) are now coming into the forefront very rapidly. Globally about 250,000 to 500,000 children become blind annually. In addition another 250 million children under 5 years are at risk of vitamin A deficiency (VAD)1. These children also have an increased risk of morbidity and mortality due to other diseases2,3.
World Health Organization has categorized Pakistan in the ‘Severe Sub-Clinical Deficiency’ category2. This refers to a prevalence of 20 per cent or more children having serum retinol values of 0.70 umoI/I, with or without clinical eye signs and symptoms3. The importance of preventing and/or reducing VAD can be realized from the fact that 250 million pre-schoolers could be saved from this single main form of ‘preventable blindness’, annually4. Also, the risk of death in pre-schoolers can be reduced by 23 per cent4,5. VAD is also associated with growth faltering, especially marasmus and kwashiorkor6.
With such devastating effects and enormous magnitude, vitamin A deficiency is not a problem that can be ignored. A number of efforts are well under way especially in South East Asian and African countries for many years. Unfortunately no large-scale activity had been carried out in Pakistan, until last year. Before the start of this mass supplementation program by the Government of Pakistan in 1999, Vitamin A supplementation coverage figures were very dismal, i.e., 1 per cent7. This mass supplementation has been incorporated with National Immunization Days (NID). The first vitamin A supplementation campaign was held in November 1999 and the second in May 2000. Various questions related to the coverage of immunization on NIDs have risen. Also, health professionals especially from India6,8 have been skeptical about issues related to the toxicity of vitamin A supplements.
The Ziauddin Medical University has been actively participating in the NIDs since 1996, in the nearby squatter settlement of Gulshan-e-Sikanderabad. The strategy in the last three years has been to improve the coverage of under five children by door-to-door campaign, with the help of medical students and community volunteers. In the last two campaigns vitamin A was also given to the children in the second round of the NIDs. This study was designed to determine the coverage of vitamin A supplements in children under five years of age in block I-A of Gulshan-e­ Sikanderabad and to assess the incidence of symptoms related to hypervitaminosis A.

Gulshan-e-Sikanderabad is a squatter settlement situated near Block 6, Clifton. The total population of the area is approximately 25,000. The majority of the people are Pushto speaking (79%) and have migrated from NWFP (63%), Afghanistan (14%) and Punjab (15%). Almost half the population works as laborers (45%). The remaining are either in government service (12%), transporters (9%) or have their own small businesses (15%). The area is divided into five blocks. The present survey was carried out in block I-A, which consists of half of block I and is similar to block I-B with respect to age and sex distribution, occupation, ethnicity, etc.
The polio eradication campaign was carried out in May 2000, in which vitamin A supplements were given in addition to polio drops. The dose of vitamin A was 50,000 lU for children aged 6 months to under 1 year and 100,000 lU for children aged I to 5 years. The vaccines and supplements were given through health volunteers who live in that area. This survey was conducted within 48 hours, using the fourth year MBBS students of Ziauddin Medical University (ZMU), under faculty supervision. A pre-tested structured questionnaire was used to assess coverage and symptoms of toxicity. The toxicity symptoms studied were headaches, nausea, vomiting, visual disturbance, bulging of fontanel and fits. As infants cannot convey complaints of headaches, excessive crying was used as a proxy indicator (both these signs were asked in the questionnaire).
The students were divided into 12 groups of 5-6 each. Every group covered approximately 30-35 houses, supervised by a faculty member. They contacted the mother, or in case if the mother was not available, an elder of the house, to obtain the required information. Each faculty member was responsible for checking all the forms of his/her group for completeness and accuracy. If a toxicity symptom was reported, it was verified on the spot, by the faculty. Data was entered and analyzed in Epi Info version 6.04 b9.

There were 433 houses in block I-A Sikanderabad, of which 403 are residential and the remaining are either deras, shops and non-residential plots. Out of the 403 houses data was obtained from 264 (65%). (Figure 1). 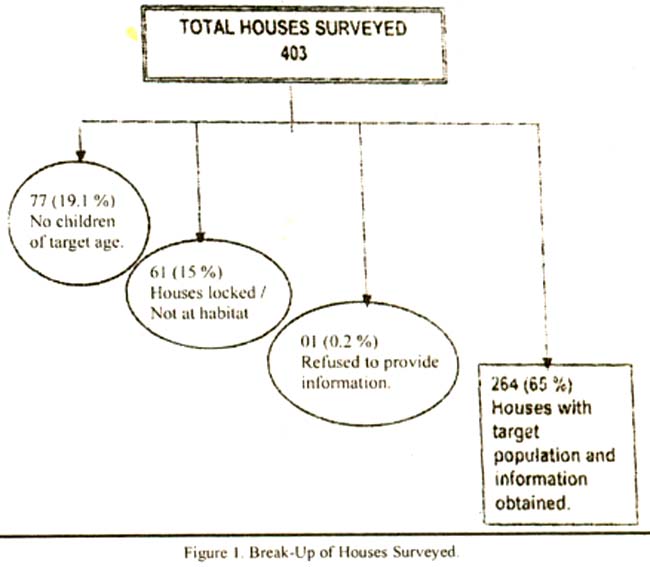 The response rate of the study was 81 %*.
Data could be collected on 489 children. The age and sex is presented in table 1. 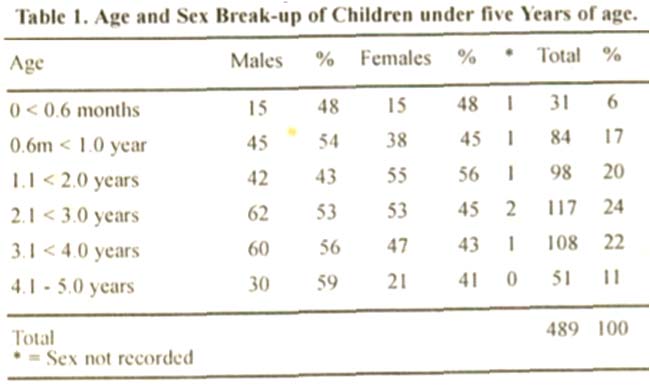 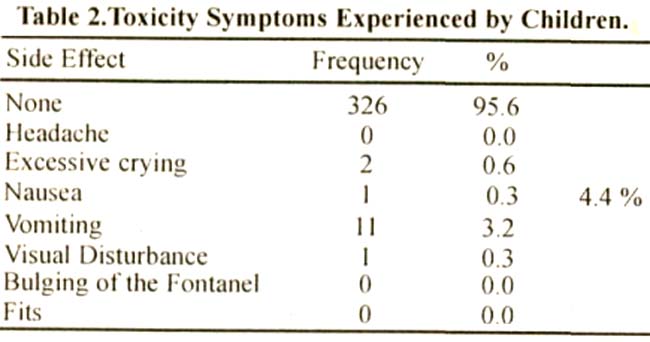 Polio and Vitamin A are both issues of great public health importance. The present study conducted in Guishan­e-Sikanderabad has a coverage of 81%. The study had some limitations that need to be recognized. Since the survey was done in a sluni settlement it can be generalized only to other low income slum settlements, where similar non­governmental organizations are working. However, our methodology can be reproduced in other localities especially in middle and high income areas.
Secondly the researchers used local area volunteers, who had low literacy levels (secondary or lower) and were semi-trained health workers. This perhaps is the reason that some children less than six months of age were given Vitamin A supplements. Although none of these children experienced any side effects, they could have, especially because breast-feeding rates are quite high. More research needs to be conducted to establish whether this issue is of concern especially in populations where maternal diets are better and hence breast milk may contain a higher content of Vitamin A.
Sixty-two children did not receive vitamin A but polio drops were given to them. A possible reason for this could be that people in the area are familiar with polio vaccination and do not know that vitamin A was to be given with polio. Therefore they reported that only polio was given. It is also possible that the person who took the child/children for vaccination was not at home at the time of the survey and other elders in the family did not have the required information. Hence the figure reported for vitamin A coverage may be an under-estimate.
Vitamin A deficiency may increase susceptibility and severity of infections, which leads to a vicious cycle of malnutrition-infection complex and contributes greatly to mortality. (Figure 2). 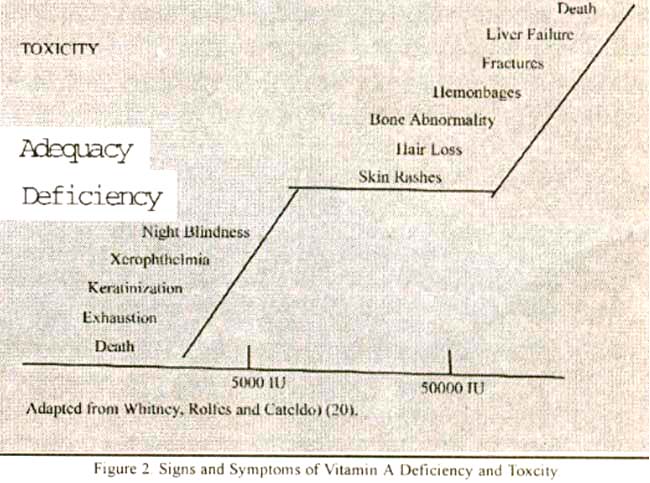 On the other hand the treatment of VAD is all too easy. The ‘magic capsules’ are cheap, just 2 US cents a piece and are very effective. Coupling the vitamin A supplementation campaign with NID, takes care of the logistics at a minimal additional cost10. Toxicity has been associated with the abuse of vitarñin A supplements and with diets high in preformed vitamin A (animal sources)11,12. Also, in certain conditions such a compromised liver function due to drugs, viral hepatitis and PEM, toxicity symptoms may be seen at a lower than usual dosed. Apart from mass scale supplementation programs, supplements of vitamin A are taken in the form of multi-vitamin syrups and tablets available freely in the market12.
General Practitioners prescribe these without constraint to children, irrespective of the income strata. Literature suggests that toxicity due to dietary intake is rare, but occurs more frequently from overuse of supplements, either because of over-prescription by the physician or over-dosing by consumers13,14. Over dosing may occur because of the misconception that if little is good, more should be better12. These issues cause concern about the possibility of acute toxicity triggered by the ‘magic capsule’, especially when massive supplementation is being carried out at regular six month intervals. In the present study the researchers found that the overall incidence of side effects was 4.4 % (n=15). Other studies also report similar incidence rates of toxicity15,16.
A community trial carried out in Philippines reported higher incidence of toxicity symptoms. The incidence of nausea and/or vomiting was 8.8% and that of headaches was 15.9%. in children aged 1-6 years. These children were given 200,000 lU. In comparison children given half this dose i.e. 100,000 experienced much fewer side effects, i.e. 3.6% and 2% of nausea and/or vomiting and headaches, respectively17.
The prospect of saving a child’s eyesight with a few US cents worth of vitamin A would defmitelv make supplementation a very popular approach, but it is more important to ensure adequate vitamin A intake through out life. Supplementation is really an emergency measure; it does nothing to eradicate the problem10. It should be part of a broader approach to reducing VAD. including health education, diet diversification and food fortification1,2,5,6. Fortification in the long run is cost effective and multiple nutrients can be added into one food vehicle5,18. Hence a multi-strategy approach combining supplementation, as a short-term measure to trigger initial response and health education about appropriate diet and food fortification, as long term measures, to take over from where supplementation lets off, can achieve the target of preventing Vitamin A deficiency disorders both effectively and efficiently.