The outlines of breast diseases are still not well reported in Saudi Arabia. In fact, the reporters have mainly expressed the pattern of malignant disease1-10 and none has stated the male breast lesions. The present situation of this common and serious health problem is less than ideal and indicates that more has to be done to detect the disease at an earlier stage. This can be achieved by encouraging a more wider and confident use of Fine Needle Aspiration (FNA) in the routine practice of palpable breast lesions11. In order to compare our study with the literature, we are also including the information from 7 other reports using the same statistical criterion1-3,5-8. In this study 953 surgical breast biopsies and mastectomies, in the Department of Surgical Pathology, King Abdul Aziz University I lospital, Jeddah during the period of 15 years (from January. 1984 to December. 1999) have been analyzed.

King Abdul Aziz University Hospital is a tertiary care hospital located in Jeddah. In an attenipt to delineate the spectrum of breast lesions, data on female breast biopsies and mastectomies and FNACs done between January, 1984 and December, 1999 were retrieved from the records of the laboratory, keeping track of age. histopathological diagnosis, cytological diagnosis and frozen section diagnosis. Histopathology cases were classified as inflammatory, benign and malignant lesions. Mean age for the three histopathalogical groups and for each individual lesion were derived.

While scrutinizing all the breast lesions for the time frame of 1 5 years, we came across a total of 953 cases, which were filtered and categorized into three main groups: (I)   Inflammatory breast lesions 102 cases (10.7%), (2) Benign breast lesions 542 cases (56.87%) and (3) Malignant lesions 309 cases (32.42%). The mean age of presentation for these groups was 29.56, 31.7 and 49.19 years respectively. Overall the most commonly reported lesion was fibroadenoma 254 cases (25.89%) followed by infiltrating ductal carcinoma 250 cases (25.48%), fibrocystic disease 126 cases (12.8%) and fibroadenosis 79 cases (8.05%). Among all the inflammatory lesions, the most commonly reported was chronic mastitis 30 cases with a being mean age of presentation 38.6 years. There were also 12 cases of granulomatous mastitis out of which 5 were confirmed as tuberculous.
The major fractions of our patient collection (mean age 31.7 years) had benign lesions with fibroadenoma (46.9%) being the most commonly reported tumour (254 cases). The mean age of its presentation was 29 years. The second ranking lesion was fibrocystic changes comprising of 126 (23.3%) cases (mean age 41 years) and the third fibroadenosis 79 (14.5%) cases. In 48 cases (8.85%) no pathological changes were found on analysis. The rest of the benign breast lesions were related to lactational breast and others to proliferative lesions such as epitheliosis and sclerosing adenosis.
Of all the breast lesions 32.42% were malignant. Ductal carcinomas (271 cases) were the most common (Table 1). 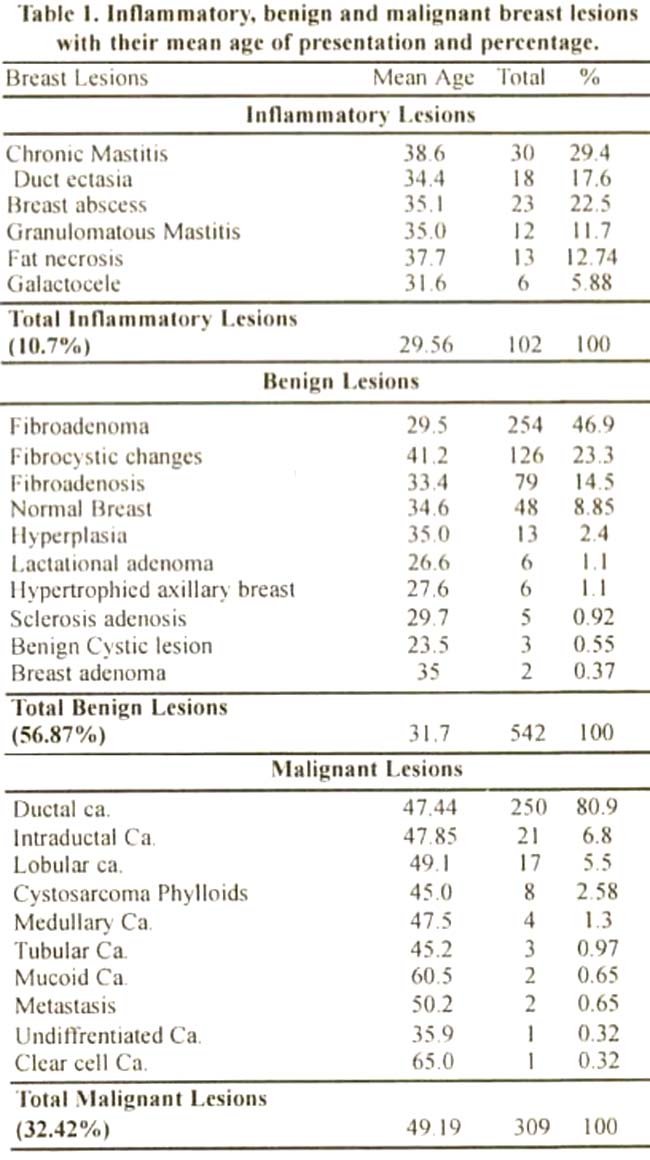 Table 2 shows the comparison of the data published in the litature and the results obtained in this study (graph). 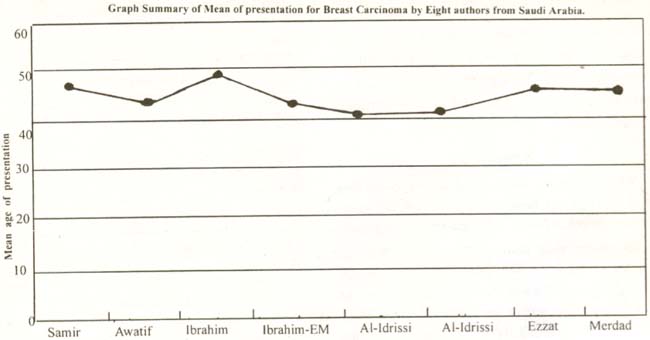 Most studies on the female breast pathologies in Saudi Arabia focused mainly on malignant neoplasms5,12,14 and the literature addressing the pattern of breast diseases is scant. In fact only 2 studies2,6 were found focusing on the profile of breast diseases. This study is aimed to highlight the spectrum of female breast lesions.
The most common lesion found in females were benign (56.87%) followed by malignant (32.42%) and inflamatory (10.7%) respectively. The two other studies show more inflammatory lesions than malignant (Table 2). One study from Abha region reported highest incidence of inflamatory lesions in their area6. Another study from Eastern Province reported a decline of inflammatory breast lesions from 29.5% in 1967-1971 to only 18.5% in 1992 even though they believed that this category of breast diseases is underestimated because most abscesses were drained and rarely biopsied7. The smaller number of inflamatory lesion (10.1%) in our study could have a similar explanation.
The greater fraction of malignant lesion in this study could be explained, as our institution is a tertiary care referral centre. All the inflammatory and benign lesions years received were in early 30 years with a mean age of 36 and 31 respectively. Similar values were found in other studies2,6. Malignant lesions in our study comprised of 309 cases (32.42%) with the mean age of 49.19. The mean age calculated by other studies for carcinoma were similar and are summarised in Table 2 . Taking the mean of all these values the mean age for carcinoma was 44.18years. This study and others reported from other parts of the Kingdom and from other Arab countries as Egypt13,15, Kuwait16 and Jordan17, indicate that breast cancer is occuring at an earlier age in Arab countries18. Furthermore, most of the patients who seek medical advice have advanced disease. It is not known whether this is due to the delay in presentation and seeking medical advice, due to cultural and social customs. or to a more aggressive disease in this part of the world.
The current study cannot explain the differences in trends of breast diseases. Factors like age, racial, social, cultural, genetics and dietary may play a role in explaining these differences. Therefore, further combined studies are needed to elucidate the real pattern of breast diseases among females of this region and other regions. However the overall results of this study are concordance with many other studies performed in other parts of the Kingdom.1,2,4,19,20
Fibroadenonia was the first most common lesion among all. It is diagnosed in 25.89% of our patients compared to 31 % and 22% reported in the Eastern Province and Abha region2. This frequency is much higher than that of England (7.7% )12 and slightly higher than the frequency reported in the USA (18.5%)16. However, it is less than the one shown for the African American people (35% )21. The causes of this high frequency of fibroadenoma among our people is not known, but racial predisposition and hormonal imbalance may have some influence.
In conclusion this study reports the pattern of breast lesions in this area and it shows an interesting comparison with seven other studies from other parts of the Kingdom.
Comparative analysis of the pattern of breast lesions from all regions of the Kingdom, point to the fact that similar etiological influences are playing a role in our region. However, a large-scale study including all regions of the Kingdom and looking at specific etiological factors and comparing them to other Arab and Western countries is highly recommended for future.