Objective: To study the perceptions on physician assisted suicide, among patients presenting to family physicians, at a teaching hospital in Karachi, Pakistan.
Method: The study was carried out at the Community Health Center of The Aga Khan University Hospital, Karachi, between December 1999 and May 2000. The principal and co-investigators filled a pre-coded and pre­tested questionnaire consisting of important demographic characteristics and bio-medical ethics issues. A system of convenience sampling was used and a written consent was taken from respondents over the age of 16 years, who agreed to participate. The data were managed by using the Epi Info (version 6.0) program.
Results: Four hundred twenty respondents were interviewed against an estimated sample size of 385. Majority (88%) were males between 25 and 34 years of age, and were self employed or in private service. Overall 9%respondents were advocated of physician assisted suicide. advocates was 9%. Those who advocated the Physician assisted suicide were more likely to be female, elderly, married and educated amongst the total respondents. Those who support Physician assisted suicide were less likely to attach divine qualities to physicians and were more bold, courageous and tolerant towards broader biomedical ethics issues.
Conclusion: We have found a substantial acceptability to the idea of Physician assisted suicide in a Muslim society and have identified characteristics of those who support it (JPMA 51 :233;2001).

Euthanasia is the deliberate ending of life of a person suffering from an incurable disease. In Pakistan, an Islamic country, suicide and attempted suicide are considered criminal offences and there are strong religious sanctions against suicide1. The perceptions about euthanasia and physician assisted suicide among Pakistani population has been scarcely studied. The issue is highly controversial and widely debated all over the world.
In the Roman Catholic perspective, on the basis of the principle of “sanctity of life”, direct intervention to end the life of a patient in a terminal condition cannot be considered2. Medical illness is an important part of the motivation for suicide, a significant factor in about 70% of suicides in patients over the age of 70 years. Improved psychiatric and medical care for those who are terminally ill offer significant possibilities for suicide prevention3.
Findings of a study of American public opinion towards euthanasia and the physician’s role in performing it, suggests that highly educated, politically liberal respondents with a less religious self-perception are most likely to accept active euthanasia or suicide in the case of terminally ill patients4. A study conducted among 43 Chinese, predominantly Buddhist subjects, in Singapore, found that 51.2% thought that euthanasia should be allowed while a 34% disagreed5. In Netherlands, most pharmacists are supportive of euthanasia and physician-assisted suicide and prepared to fill prescriptions written for these purposes6. A study carried out in Sweden suggests that improving patient’s awareness of the possibilities to relieve pain, anxiety and dyspnoea during the final days of life is an important way to reduce request for active euthanasia7. A request for Physician assisted death, is in fact a plea for the relief of symptoms.
In September 1998, the German Medical Association published new principles concerning terminal medical care. Euthanasia is unequivocally rejected in the principles and is considered to violate professional medical rules8. It has been shown that discussions about end-of-life decisions may be facilitated by a patient’s belief in a forgiving God and health care providers need to recognize patient’s spiritual beliefs and incorporate them into discussions about terminal care9.
Based on above given facts, we concluded that enough need exists to study the perceptions about physician assisted suicide, among patients presenting to the General out-patient department, of The Aga Khan University Hospital, Karachi.

A cross-sectional study was conducted on patients attending the community health center of The Aga Khan University Hospital, Karachi from December 1999 to May 2000.
The sample size for the estimation of prevalence for those who advocate physician-assisted suicide, for different characteristics of demographic and other biomedical ethics issues in our study, was calculated by taking a proportion of 50% with level of significance (a) of 5% and the bound on error (the absolute difference between actual and estimated prevalence) of 5%. The minimum sample size of 385 was required for the study. A total of 420 patients were interviewed.
The study investigators and co-investigators filled a pre-coded and pre-tested questionnaire consisting of important demographic characteristics and biomedical ethics issues. A method of convenience sampling was used and all adults above 16 years of age, who agreed to participate were asked to sign a consent form. Using Epi Info (version 6.0), the estimated prevalence with 95%
confidence interval for single proportion, was used for the estimation of prevalence in different characteristics of demographic and bio medical ethics issues.

A total of 420 respondents were interviewed. Eighty eight percent of them were males. Thirty four percent were between 25 and 34 years of age, 25% and 41 % were under 25 years and above 35 years of age, respectively; 31% were in private service, 11% in government service and 27% were self employed. 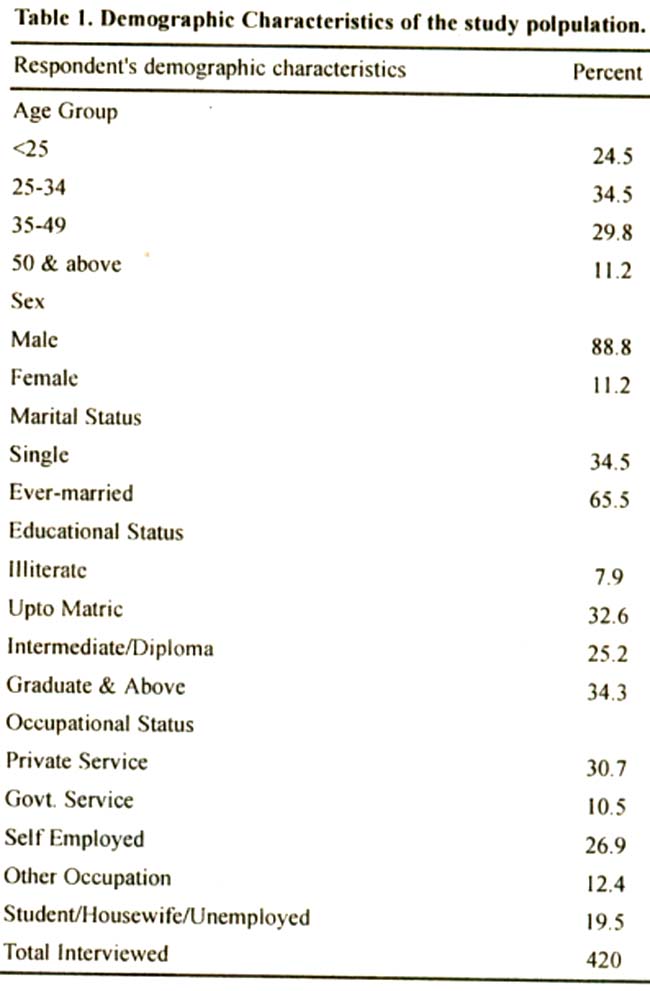 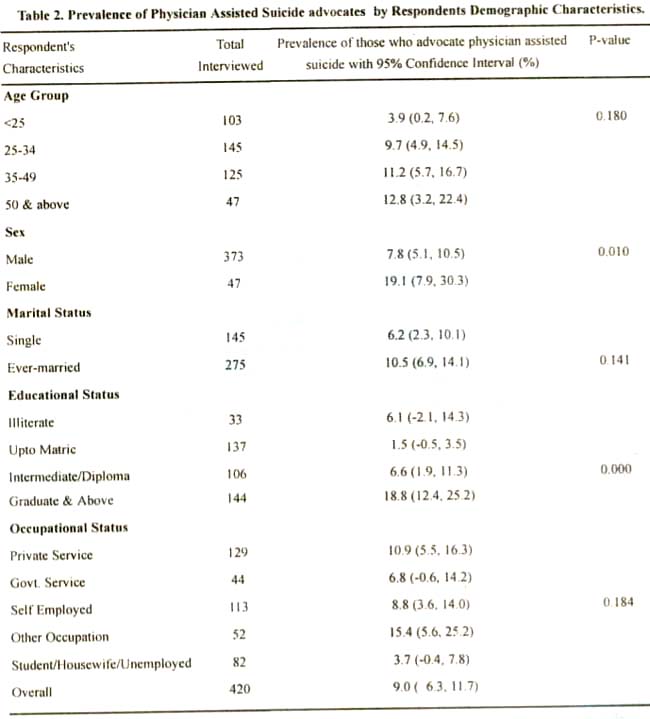 Table 2 shows the prevalence of those who advocate physician-assisted suicide (with 95% Confidence Interval) by respondent’s demographic characteristics. 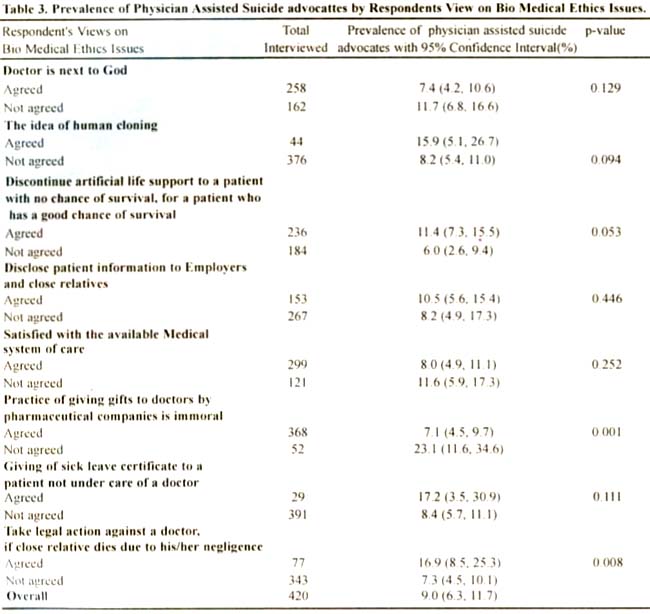 Table 3 shows the prevalence of those who advocate physician-assisted suicide (with 95% Confidence Interval) by respondent’s views on biomedical ethics issues.
The study population consisted of 89% men, 65% of them were married, 34% were having graduate or post­graduate education. Therefore we cannot generalize the study results to the rest of the country. The sample size of study has been adequate and our study does offer useful information on the sensitive issue of euthanasia, which remains a controversial issue all over the world.
We found 9% acceptability to the idea of Physician assisted suicide in our study sample. Any policy on euthanasia should be based on the wishes of the individual so long as those wishes do not adversely affect others. Perhaps as in Netherlands, euthanasia needs to be decriminalized without being made legal, in a similar way to the decriminalization of soft drugs such as marijuana10.
Those who supported physician-assisted suicide in our study attached less divine qualities to doctor, such as “doctor is next to god”. They were more bold and courageous in terms of bio-medical issues in general such as discontinuation of life support. idea of human cloning, practice of giving gifts to doctors by pharmaceutical companies or sick leave certificate issuance. This study has perhaps been among the first studies on the sensitive issue
of physician-assisted suicide in Pakistan. We hope that it will generate debate on the issue and will result in further studies in this interesting area of bio-rnedical ethics.