Objective: To see the effects of aerobic exercise, on changes in blood pressure, in patients with essential hypertension. A 12-weeks aerobic exercise intervention trial was conducted, to examine the influence of brisk walking on resting systolic and diastolic blood pressure, pulse pressure, mean arterial blood pressure, body weight and body mass index in patients with essential hypertension.
Subjects and methods: Twenty-seven men with stage 1 or 2 essential hypertension (not on antihypertensive medication) participated in the study. The aerobic exercise training protocol consisted of 30 minutes of brisk walking 3 to 5 times per week, at 50% of VO2max on an ergometer cycle. The data were analyzed by comparing exercise responses at baseline and 12-weeks.
Results: Statically significant decrease in resting systolic [mean+SEM, 143.2+1.4 to 137.5+1.2 mmHg, mean reduction -5.7 mmHg, p<0.01] and diastolic [mean+SEm, 91.8+1.0 to 90.4+0.9 mmHg, the mean reduction -1.4 mmHg] blood pressure wre found (p<0.05). Reduced pulse pressure from baseline value of -3.7mmHg, (p<0.01) and mean arterial pressure of -3.4 mmHg (p<0.01) was noted. No discernible effects on mean body mass index was observed although mean body weights decreased -1.1kg, (p<0.05). Brisk walking yielded significant increase in VO2max (p<0.05).
Conclustion: Aerobic exercise caused small reduction in resting systolic and diastolic blood pressures in men with stage 1 or 2 essential hypertension. A lifestyle change such as exercising. may play a role in reducing the risk of hypertension (JPMA 51:222;2001).

Hypertension (systolic and diastolic blood pressure >140/90 mmHg) is a major modifiable risk factor for cardiovascular disease. Elevated blood pressure levels have been shown to be a risk factor for stroke, congestive heart failure, myocardial infarction, peripheral vascular disease, and end-stage renal disease1. The recent Joint National Committee on Prevention, Detection, Evaluation and Treatment of High Blood Pressure, recommended that optimal blood pressure levels should be less than 120/80 mmHg, for resting systolic and diastolic blood pressure respectively. Non-pharmacological intervention in the form of regular aerobic exercise has been recommended for the prevention of high blood pressure as well as the lowering of blood pressure among those individuals, with elevated level1.
Physical inactivity is associated with increased risk of development of both hypertension and coronary artery disease (CAD)2-4. No studies yet have assessed the effect of aerobic exercise for lowering the blood pressure in patients with essential hypertension in our indigenous population. Thus, the purpose of this study was to measure the influence of brisk walking on stage I or II essential hypertension.

Patients with primary hypertension, stages I or II, who had not been previously treated with antihypertensive drugs, were recruited from Nawabshah and studied during 1999-2000.  The design and intention of the study was thoroughly explained and informed consent was obtained from all study participants. The subjects underwent a standardized baseline assessment. All subjects were free of overt disease, as assessed by medical history, physical examination and fasting blood chemistries. Subjects were excluded from the study if they presented a history or evidence of hepatic, renal, or haematological disease; stroke, diabetes (fasting blood glucose >7.0 mmol/L)5, or body mass index of(BMI) >35.
All the study participants had physician-diagnosed stage I or 2 hypertension (blood pressure >140/90 mmHg)1; no subjects were taking antihypertensive medication and all subjects were nonsmokers and had not participated in a regular aerobic exercise programme for a minimum of 12 months. The during aerobic exercise was set at 50% of VO2max using mean ± SEM age was 39.8±0.7 years, ranging from 34-48 years, initial blood pressure 143.2±1.4/91.8± 1.0 mm Hg, body weight 68.6±0.6 Kg and body mass index was 23.1±0.3. To initiate the 12-week aerobic exercise training programme, the subjects underwent a supervised orientation, after which they exercised on their own. The aerobic exercise training protocol consisted of 30 minutes of brisk walking 3 to 5 times weekly. Exercise intensity the Karvonen’s formula6. Intensity of training was expressed as a percentage of maximum oxygen consumption, which was estimated using a cycle ergometry test. The subjects were asked to record their prescribed exercise duration on a daily basis.
The study patients were forbidden to take any medication and were also requested to maintain routine lifestyle habits with regard to diet intake throughout the study. Before the intervention period, blood pressure (BP) was obtained on 2 separate visits with an interval of 2 weeks, and the average values were used as the baseline value. In an attempt to examine the time course of BP reduction with exercise, BP was measured at least every 4 weeks thereafter; however, the data were analyzed and presented at baseline and week-12. Post-exercise training BP was defined as the mean of 2 measurements immediately after and within a week after the last bout of exercise. The different measurements were made to eliminate any contribution of the immed late (acute) effects of exercise. All blood pressure measurements were conducted during the morning hours.
Arterial blood pressure was measured using a standard mercury sphygmomanometer with appropriate cuff size, after subjects had rested in the sitting position for at least 5 minutes. Two readings were taken at 2 minutes interval, and the latter was used in statistical analysis. Systolic and diastolic blood pressures were read to the nearest 2 mmHg at Korotkoffs sounds phase I and V. Pulse pressure was calculated as systolic blood pressure minus diastolic blood pressure. Mean arterial pressure (MAP) was calculated, by the fommula to diastolic pressure plus one third of pulse pressure + 1/3 pulse pressure]. Body weight was measured on a balance scale, while participants were without shoes and heavy outer garments. Height was measured in the standing position following weight measurement by a stadiometer. Body mass index (BMI) was calculated as calculated as values at the end of a 12-week, minus values at the baseline; a negative and positive value implies a lowering or increasing of that value. Differences between means of parameters were tested for significance using the paired student’s t test. A value of P <0.05 was considered significant.

Forty male patients initially took part in an exercise training programme. Of the 40 patients, 1 3 (32.5%) were withdrawn early in the study. The reasons of withdrawal were 8 subjects were lost to follow-up, refusal in 2, and intercurrent illness in 3 and did not complete the study and remaining 27 patients, who remained compliant with the exercise programme were included in the final evaluation. However, the rate of compliance to the study protocol was 67.5%.  Baseline measurements and changes from baseline to the end of training for study parameters are presented in Table. 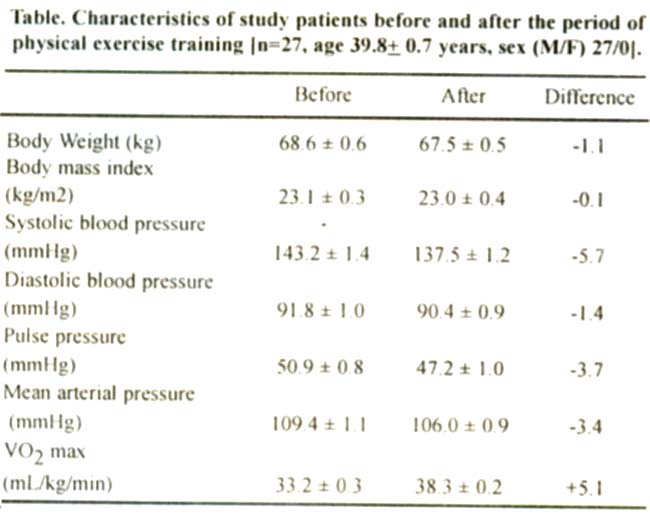 The changes in anthropometric variables did not differ significantly with brisk walking at the end of aerobic exercise intervention. No adverse clinical events or exercise-related complications were experienced.
insignificant p valLie. shows significant change at p value <0.01. and shows p value <0.05 at the end of 12-week physical training.

Multiple studies have shown that regular aerobic exercise can lower the arterial blood pressure in both hypertensive and healthy subjects2,7-9. Several non- pharmacological interventions, including exercise, are recommended, in primary prevention of hypertension and other cardiovascular diseases, in, which the pathogenetic role of endothelial dysfunction has been suggested10. Multiple exercise intervention studies have shown consistently that aerobic exercise reduces systolic blood pressure11 and diastolic blood pressure in patients with essential hypertension12,13.
The mechanisms responsible for these hypotensive effects remain clearly unknow14 and warrant further studies. Although, exercise acutely raises blood pressure, there is growing evidence that repeated physical exertion reduces blood pressure in both normotensive and hypertensive subjects15. Exercise might exert its hypotensive effects directly through hemodynamic mechanisms. Since mean arterial pressure (MAP) is equal to the cardiac output (CO) and total peripheral resistance (TPR), a lowering of resting blood pressure must result from a decrease in CO. TPR, or both, as we found significant reduction (p<0.01) in MAP at the end of study.
There is now increasing evidence that high pulse pressure, which is an indicator of large artery stiffness, is an independent risk factor for cardiovascular mortality, especially from coronary artery disease. The study of Benetos et al16, in a large French population, showed that in male subjects aged 40 to 60 years, increased pressure was a strong predictor of cardiovascular mortality, especially coronary mortality. In this recent report, cardiovascular and coronary death rates were similar in the group of normotensive men with a pulse pressure >50 mmHg and in the group of hypertensive men with a pulse pressure <45 mmHg. No association between cardiovascular mortality and pulse pressure was observed in either normotensive or hypertensive women. In the present study, we found significant decrease in pulse pressure (p<0.01) in males and as no women were studied; the results could not be generalized. However, pulse pressure could aid in evaluating cardiovascular risk.
It is known that many of the cardiovascular complications associated with sedentary aging, such as hypertension, coronary artery disease and thrombosis are pathogenetically linked to endothelial dysfunction17,18. In men, endothelium-dependent vasodilation has been shown to decline progressively with advancing age18,19, starting as early as 20 years. The reduction of blood pressure in our study, although not to the acceptable range, indirectly indicates vasorelaxation, as regular exercise can restore the loss of endothelium-dependent vasodilation in previously sedentary middle aged and older men20. We did not assess these parameters directly, however, our findings indirectly reflect these underlying changes.
DeSouza et al20, reported that 3 months of regular aerobic exercise (primarily walking) resulted in a 30% increase in endothelium-dependent vasodilation in previously sedentary middle aged and older men. Moreover, this improvement occurred without concomitant significant changes in body mass and adiposity suggesting a primary effect of aerobic exercise on endothelial cell function. Higashi et al10, reported that long-term physical exercise improves endotheliurn-dependent vasorelaxation through an increase in the release of nitric oxide in normotensive as well as hypertensive subjects. These apparently beneficial changes in vasodilator capacity and vascular structure may be produced with intensity and frequency of exercise21.
Our findings demonstrate, that the fall in blood pressure is not associated with reduction in body weight. Our subjects showed little change in body weight, whereas the change in body mass index did not reach statistical significance, suggesting that the observed changes were not due to dietary factors and also these subjects were not treated for hypertension. Thus, it seems reasonable to attribute the observed changes with the type of physical activity (brisk walking) for 12-weeks. Most clinical studies on exercise therapy for hypertension failed to show the effects of weight loss22,23. However, other studies have also shown that exercise lowers blood pressure of overweight hypertensives without producing either weight loss or a reduction in body fat24,25. The results of our study compare with other publications26,27, These findings show that, at least in the short-term, exercise-training programme (brisk walking) had no effect on mean body mass index.
VO2max (a measure of aerobic fitness) significantly increased in the present study (P<0.05) and in others (P<0.01)28. Ishikawa et al6, have also reported increased VO2max, especially in hypertensive subjects. This would suggest that the increase in VO2max and improvement in hypertension is the response of physical exercise training. The result shows that 30-minute of brisk walking at 50% of VO2max, 3-5 times weekly is sufficient for most of the beneficial hemodynamic effects to occur.
We do not know that whether blood pressure would subsequently have improved, if the period of daily exercise had continued for more than 12-weeks. However, our findings suggest that the optimum amount of regular exercise may be somewhere between 3 and 5 times per week and that there should be some rest days.
In conclusion, these findings provide a preliminary indication that brisk walking, a low cost and acceptable form of physical activity in patients with essential hypertension could be incorporated into strategies for improving cardiorespiratory fitness and has effects that should reduce the possibility of subsequent development of cardiovascular disease.

We would like to thank all the subjects who participated in the study.